The Jaguar F-Type 2.0-litre is described as “the feisty young brother” by Jaguar. Which is both encouraging and slightly worrying. Have you ever spent any time around a younger brother who could broadly be defined as ‘feisty’? Annoying, isn’t he?

But, yes, it sounds encouraging, too. The F-Type 2.0-litre marks the arrival of Jaguar’s four-cylinder Ingenium engine in 296bhp petrol form, so here it gets plonked into Jaguar’s sports-GT car. You could think of it as downsizing – which usually turns out okay, as with Ferrari and Mercedes-AMG, for example – but sometimes doesn’t. There’s the reassurance here that, if you don’t like it, the bigger engines, V6s and V8s, stay on sale, too.

You might remember the ‘four-cylinder engine in a six-cylinder car’ idea from such projects as ‘the Porsche 718 Cayman’. The biggest problem with the four-pot in the German car is the way it sounds.

A single tailpipe, rather than several, visually marks the 2.0 as it drops into the front of an F-Type. It drives the rear wheels only, and through an eight-speed automatic gearbox only. There’s no four-wheel drive or manual ’box option for the 2.0. Jaguar’s engineers decline to say if they’ve tried a manual. It wouldn’t surprise me if they had, and I’m sure it’d be even lighter again than this car – which is 52kg lighter than the V6. But while a light, stripped-out, manual variant sounds the kind of car that people like us love, it also sounds like one nobody would buy.

The 52kg reduction here pretty much all comes in the nose. When we road tested a V6 F-Type, we found it weighed 1755kg, of which 52% was over the front, so although the four-pot will remain very marginally forward biased, it should make a sizeable difference to the way it drives. 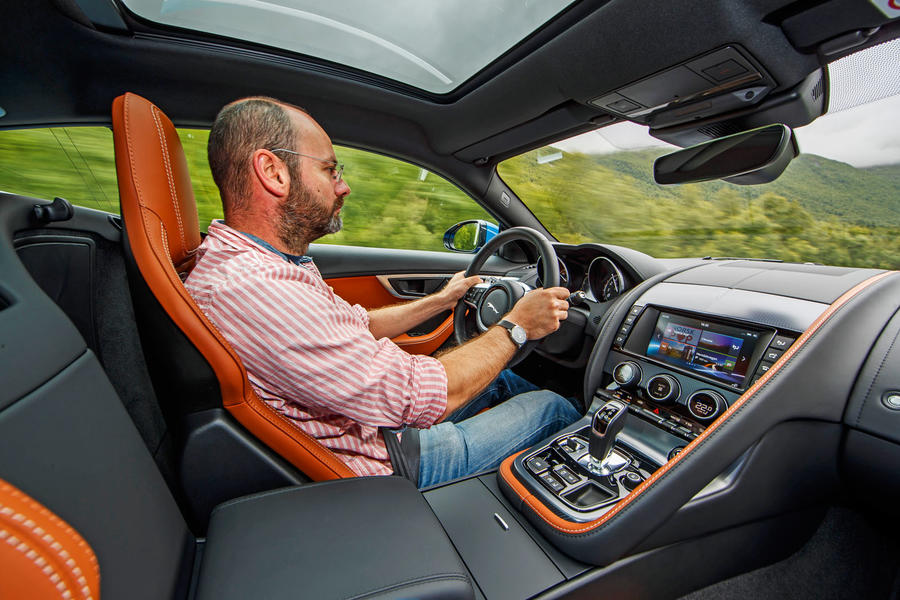 Jaguar’s engineers will discreetly tell you that this is their preferred F-Type when it comes to handling, in the same way that, with the old XK, the 5.0-litre naturally aspirated V8 was preferable to the supercharged cars, because it was quick enough yet felt that bit more agile when you turned.

We’re testing a coupé although a convertible (only 20kg heavier, it’s claimed) is available, too. As standard, you get 18in wheels – again, a format that dynamics engineers quite like – but go for R Dynamic trim, which this is, rather than the base model, and you get 19s, with 20s an option. What the 2.0 also doesn’t get is adaptive dampers. But, again, there’s the engineering wink and nod: this car’s just dandy without them.

So let’s see. The V6s and V8s in F-Types usually fire with a real visceral bark, spinning up to around 3000rpm. Apparently, they all do it, these engines, even in Range Rovers, and need to, as part of a clean start process. But the exhausts just make the sports cars far more audible. The four-pot is that bit more restrained, as you’d expect. If you have easily irritated neighbours and early starts, perhaps this is the version for you. 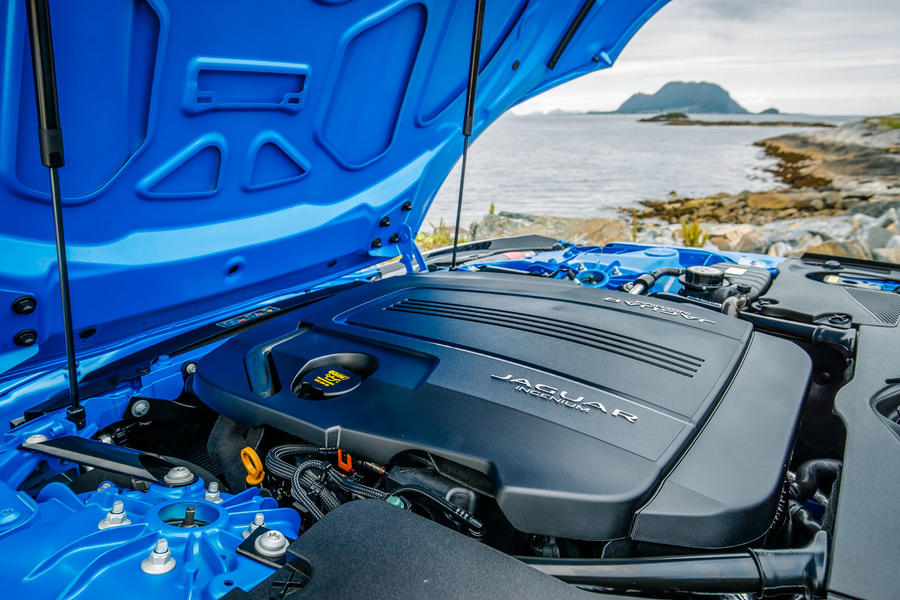 If you like your sports cars or GT cars to sound rich, powerful and expensive, though, perhaps it isn’t. How best to describe the sound? Very obviously not a V6 or a V8, I suppose, which is the trouble with fours.

The combustion note of a four, especially a turbocharged one that doesn’t rev to the heavens is, typically, so plain that you’re left chasing tricks to try to up the ante. It has worked here, to an extent. There’s an active exhaust, and some pops and burbles on the overrun if you flick the switchable exhaust’s mode to angry. There’s some semi-raucous growl as you accelerate, too. And there’s some sound augmentation through the loudspeakers, although it’s so subtle that you’ll hardly realise it’s there. Look, it sounds fine. But it sounds like a four-pot and, as with a Porsche 718, that’s just not very exciting.

There’s ‘nowt wrong with the power delivery, mind you. Peak torque comes in early, from just 1500rpm, and hangs around until 4500rpm. Peak power is only at 5500rpm, so this isn’t a car you need to thrash to get the best from it. It mates well with the auto gearbox, although it would be interesting to try it without because decent auto ’boxes – and this eight-speed is one – can mask inconsistencies in engine response. But this is good.

Jaguar claims a 0-60mph time of 5.4sec, which I don’t doubt the car will do, but it seldom feels like a five-something car. Anyway, you can add 0.3sec to that for the 62mph time, which leaves the Jaguar in the territory of theHonda Civic Type R, a car that is not only more powerful and lighter, but also nearly £20k cheaper. A coupé isn’t the place to go if you like studying statistics.

But, then, it never was. It isn’t with a Toyota GT86, which looks poor value next to a hot hatchback but is still a car you should buy over one. A coupé should give you the knowledge that this bespoke package was designed specifically to make you feel all gooey inside, because it’s better than any saloon-derived car to look at (which is true here), sit in (which is true here) and drive. So let’s come to that.

Soon after you set off, the decrease in weight at the nose is discernible, even if it has been a while since you drove a bigger-engined F-Type. Front and rear spring rates have been reduced by 4% and 3% respectively. The valving of the dampers has also been adjusted and Jaguar’s engineers will tell you this is as much about learning from what they’ve done to other F-Types as it is about optimising for this particular car’s weight. They’ve just got better at tuning it, in short. 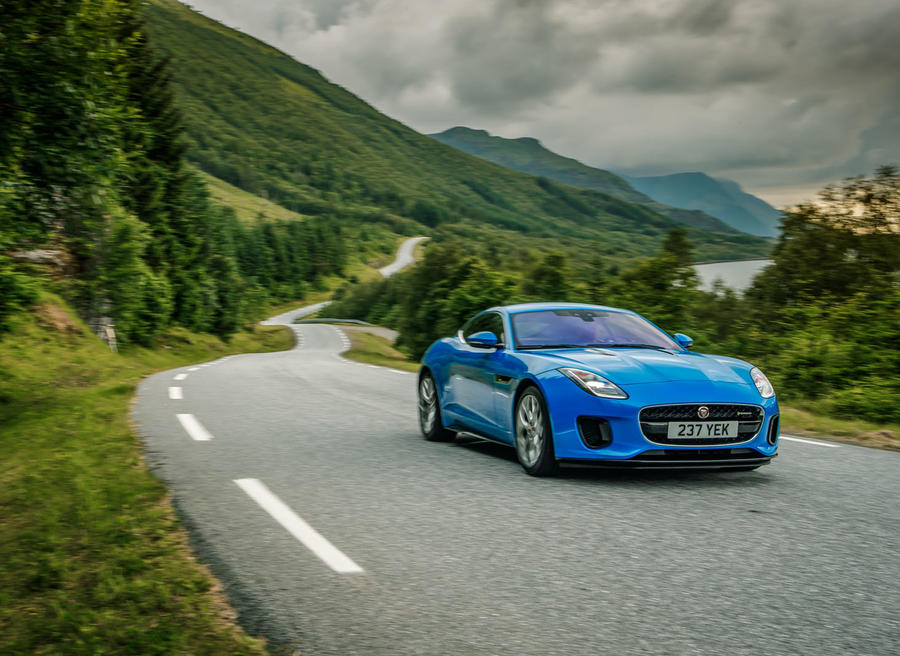 And they’ve tuned it well. The ride is composed, secure and damped with a pleasing honesty and consistency. Potholes don’t crash, crests and bumps don’t make it float or sag. And the F-Type turns with conviction – although it hardly felt nose heavy before – and true agility.

The F-Type’s electric power steering remains smooth and slick, accurate and responsive. At least, it does until you notice it has a bizarre, and unusual, tramlining, mostly under braking, where the steering gives small but frequent little tugs at the wheel, like a fish threatening a bite on a fishing rod.

The steering gets its own tune for the 2.0, and there’s torque vectoring – which can brake an inside rear wheel to mitigate understeer – but, still, I’d be astonished if the tramlining was the intentional result of that. Pity. Maybe it’s tyres, or pressures, or something about those roads, but all the test cars did it, so it wasn’t just one badly set-up car. 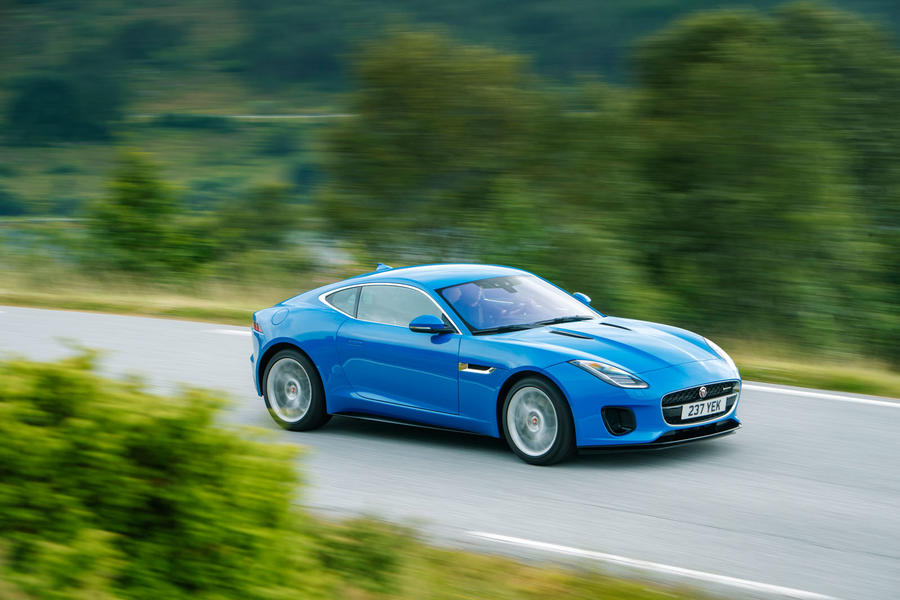 One other caveat, and one I hate making, but so be it: the roads we tried the F-Type on were mostly level and all slow. We barely drove this car at more than 50mph. Which is why the wheel-nibbling is both curious and concerning. What’ll it be like at national speed limit velocity down the more knobbly bits of the Fosse Way? Jaguar must have tried it there. We’ll try it there, too, soon enough.

Which leaves us where? Welcoming the price drop, which makes an F-Type available from under £49,900 (speccing an R-Dynamic adds £3700 to that), unmoved by the sound, and wanting to know this car better: the extra agility is welcome, but I wonder if that’s why you buy an otherwise sophisticated car like the F-Type.

Little brothers are great and all. But they’re usually better once they’ve grown up a bit. 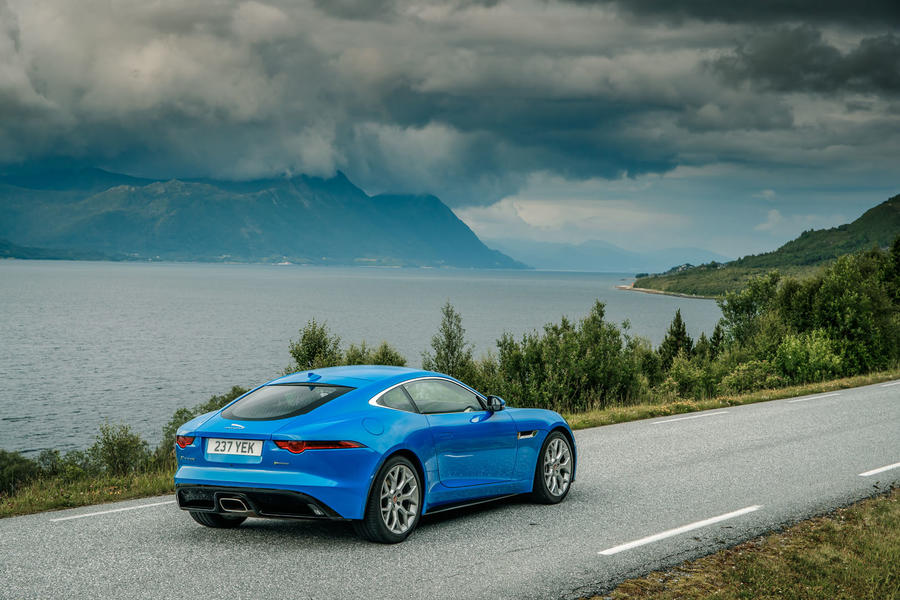 I think people are losing the

I think people are losing the culture of mechanical music...

They have just to put a screaming sound in the loudspeakers and the that's it.

Neighbour has the 3.0 Convertible...

TBH, it is loud in the morning on start up. Not particulalry very cultured or thrilling but loud. It's the V6 of course but its still a bit bland. My old Yamaha V8 in the Volvo sounds far nicer first thing although its encased by a somewhat boring looking body in comparison to his Jag!

Hmm, the 4 cyl is a bit of a faux par at this price. The only interesting 4 cyl engines in the last 20 years or so have been the Subaru Boxers and Alfa's Twin Spark units. Yes, BM have made some lovely sweet spinning ones along with Honda, but none with great Character (although the Honda's VTECs do get close). 4's just dont have it.

It may be quick, it may be a hoot but at this price and with that badge you want a soundtrack of at least the 6 (although I'm not impressed after 2 years of hearing it daily) or 8 (the way to go really) to accompany you.

The sound is also artificial