If you haven’t been keeping count, this is now the fourth powertrain option to make its way into Hyundai’s popular compact crossover. Petrol, electric and since-retired diesel only provided so much choice - so you can now have your Kona as a hybrid as well.

It’s a familiar setup, with the same 1.6-litre four-cylinder petrol engine and 32kW electric motor as the Ioniq hybrid. Both work in parallel via a six-speed dual-clutch automatic gearbox to drive the front wheels only, and the small 1.56kWh battery pack recharges itself entirely through braking and coasting.

Multi-link rear suspension is borrowed from the Kona Premium GT, with little else changed mechanically from the petrol car. Only minor exterior tweaks go with the vibrant palette of new colour options.

It’s a similar story inside the cabin, which was already well appointed in petrol guise. The Kona Hybrid does gain Bluelink, Hyundai’s connected car software, for remote unlocking through a smartphone app, along with live traffic, speed camera warnings and fuel prices. 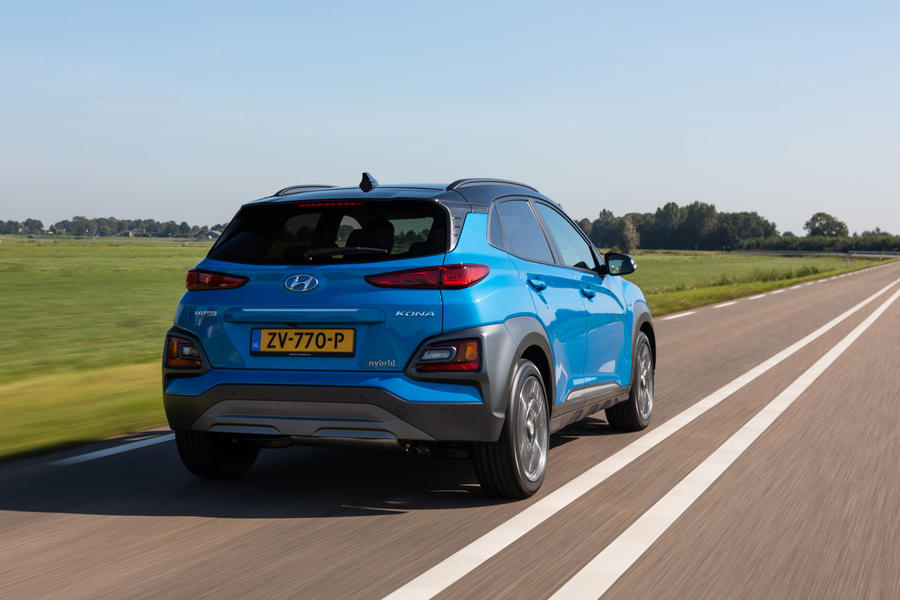 The Kona is as roomy as ever in hybrid guise, with plenty of room for a pair of 6ft-tall adults on the rear bench even with another two up front. However, that should hardly come as a surprise, given that its platform was designed from the start to accommodate battery packs.

The interior is largely unchanged from that of the petrol car, with cheaper plastics mostly placed below your line of sight and softer materials within easy reach. A colour pack unique to the hybrid adds white accents around the air vents and gear selector that are less in your face than the orange, red or lime trim available on the standard car.

The 10.3in infotainment system fitted to our Premium SE test car initially appeared simple, but look beyond the basic icons and there’s a whole host of information to be found on the hybrid system. It also plays nicely with both Android Auto and Apple CarPlay.

A heads-up display is just as comprehensive, with an eco-driving assist function highlighting when to lift off and coast towards junctions. It’s largely accurate, too, never leaving us too far away from our stopping point.

The available technology largely tallies with the Kona Hybrid’s asking price, although you get a more basic instrument binnacle than the Kona Electric’s digital cluster here, and the blue backlighting illuminating every button and control is starting to feel a little dated; white might have added a touch more sophistication.

While our test car rode on 18in wheels, the dent they make in emissions and fuel economy over lesser-equipped cars running on 16s is minor, with an indicated 55mpg on our test route. It rode well across Amsterdam’s largely smooth roads, coping comfortably with the few cobbled streets we could find.

Hyundai’s choice of dual-clutch automatic gearbox should, in theory, mean less droning than a CVT. That’s largely true for sedate city driving, with the default Eco mode dropping back to battery power alone whenever it can and the engine staying fairly innocuous. It does blunt the accelerator, though, and calling for more power forces the gearbox to kick down and the revs to flare up anyway.

A combined output of 139bhp suggests it isn’t short on power, but the engine sounds like it’s straining to achieve it. Things are far less intrusive at a motorway cruise, with minimal vibrations transmitted from engine to cabin.

Sport mode sharpens up throttle response and gives the otherwise light steering more heft, and paddle shifters let you take control of the cogs yourself, but the Kona’s dynamic appeal remains behind that of the class leaders in a very competitive segment. 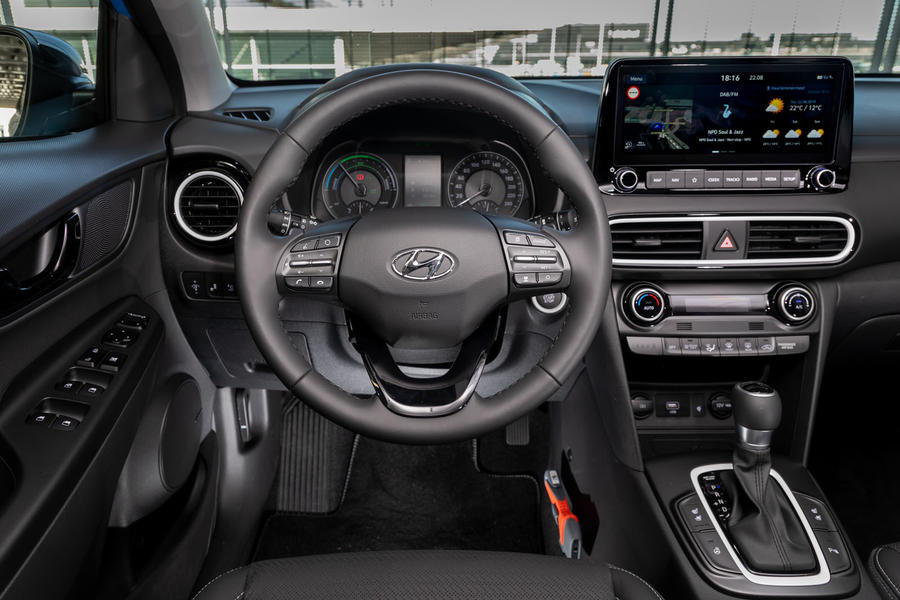 If you’re not yet ready to take the plunge on a fully electric car, the Kona Hybrid is certainly worth considering for the potential savings you could make at the petrol pumps.

There’s still a shortage of choice in the segment when it comes to alternative powertrains, with the Kona providing less divisive styling than the Toyota C-HR. Its smaller dimensions might suit suburban drivers more than the larger Kia Niro, too.

It’s unlikely to prove as transformative as the Kona Electric, but now that Hyundai has exorcised diesel engines from the line-up, the hybrid manages to strike a sensible middle ground for emissions and economy. 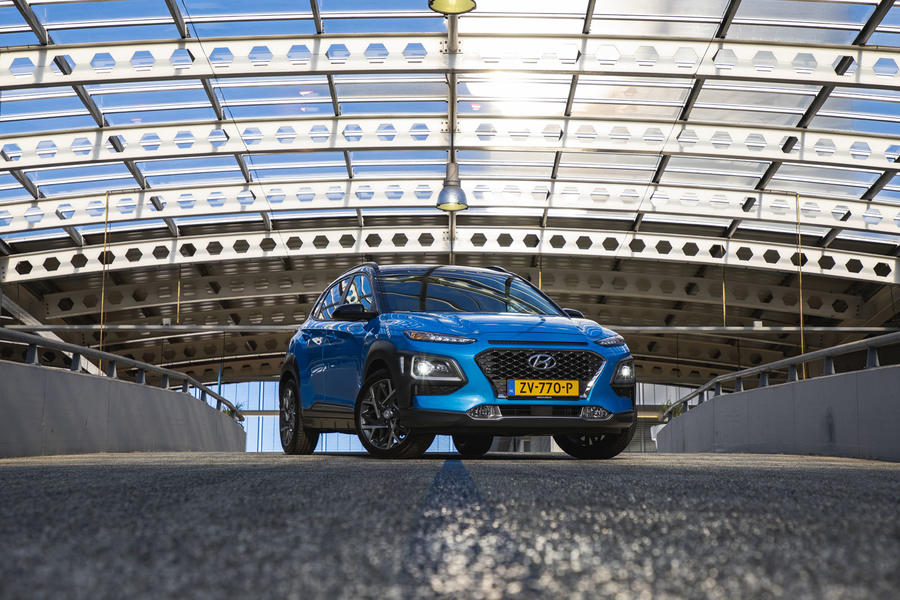 Hybrid savings (if you've the patience)

"the Kona Hybrid is certainly worth considering for the potential savings you could make at the petrol pumps"  just bear in mind the 1.0t premium SE is £5,000 LESS. If you deduct £1,500 for the worth of an Auto box (if available) then it's £3,500 more.

Save, say 10% (£200) on fuel and £100 on tax a year you'll looking at payback in 11.5 years time by which time the car will be worth no more (maybe less) than the standard petrol verion. And that assumes nothing has gone wrong with the electric motor, additional battery or software.

Can’t argue with your maths xxxx

However you assume it’ll even be possible to sell a pure combustion car in 2030. Or what tax disadvantages/scrappage schemes will apply.

I’m not a betting man, but I’d back hybrids/bev’s to retain better value

However you assume it’ll even be possible to sell a pure combustion car in 2030. Or what tax disadvantages/scrappage schemes will apply.

I’m not a betting man, but I’d back hybrids/bev’s to retain better value

I'm pretty sure if you bought one today you'd be able to sell it secondhand in 10 years times. I'd go as far to say pure combustion cars will still be available new too, but that's pretty irrelevant.

"the Kona Hybrid is certainly worth considering for the potential savings you could make at the petrol pumps"  just bear in mind the 1.0t premium SE is £5,000 LESS. If you deduct £1,500 for the worth of an Auto box (if available) then it's £3,500 more.

Save, say 10% (£200) on fuel and £100 on tax a year you'll looking at payback in 11.5 years time by which time the car will be worth no more (maybe less) than the standard petrol verion. And that assumes nothing has gone wrong with the electric motor, additional battery or software.

This was often the case for diesels over petrols, you needed to do a lot of miles before braking even, when we bought a scenic in 2000 on a PCP with 30k the mileage limit, I calculated I'd need to do over 90k miles to recoup the diesels extra outlay so bought a petrol. The only difference with this I think is what the future holds for the straight petrol version, it could get taxed to oblivion in the near future and I personally would have little concern over the hybrid tech as Prius and ima Honda's have been proven reliable so this should be no different. I know it's premium spec but if available the full electric version is not too far away price wise and if you head to MG the ZS is available for less, proving BEVs are becoming more affordable. Interesting times. All are still way too expensive for me though.