From £18,2558
Hyundai's popular Kona has been facelifted. Is that enough to keep it competitive in the cut-throat crossover market?
Open gallery
Close

If any car symbolises how far Hyundai has come in the past few years, it’s the Kona. Not only does it sell well (the aim is for 17,000 units in the UK this year, which would make it the firm’s second best-selling car), but it also has nearly the full gamut of powerplant offerings to cover any customer’s needs. Petrol mild hybrid, hybrid and electric - there’s even a hot N version coming. Europeans also get diesel versions, but Hyundai sold so few here it doesn’t bother any more.

The car has recently been facelifted and this time we’re trying out the hybrid version of that surgery. It’s not the most radical design overhaul but if you enjoy playing ‘spot the facelift’, you should know that the narrow daytime running lights are even narrower (if that was possible), while there’s more plastic cladding around the nose and the front foglights are more rounded and less blocky. The rear also features a smidge more plastic cladding and similarly tweaked lower lights. In addition, new paint colours are available (complete with predictably jazzy names such as Surfy Blue) and new wheel designs. The 18in alloys on our test car look particularly good.

Overall, it’s not what I’d call a beautiful car, but it is at least distinctive - something that’s needed when the compact crossover class is so crowded with rivals like the Renault Captur, Toyota C-HR and Nissan Juke.

Inside, the overhaul continues with a fresh new infotainment system - 10.25in touchscreen but mercifully with plenty of physical buttons directly beneath it – so it looks less like a Fisher Price system these days. There’s a new digital dashboard display as well. An electric handbrake has been added, as has the odd touch of chrome - nothing major but it certainly helps to make it look more up to date.

There’s plenty of technology on offer: wireless Apple CarPlay and Android Auto phone connection is standard across every trim, and all bar the base Kona come with nav and BlueLink Connected Car Services, the latter of which covers things like Last Mile Navigation (which will transfer the last bit of nav instructions to your phone, if the end of your journey has to be on foot), Connected Routing (smart navigation, so it’ll update according to traffic) and Live Parking information (does what it says on the tin). It’s a subscription service but you get five years for free.

Leather is standard in this Ultimate trim level and features both heated and ventilated front seats. The rears are also heated as standard. Impressive stuff from a car that costs under £30,000.

Those rear seats are a bit flat, but you perch quite high in the back so there’s good visibility over the driver’s shoulder. Anyone over six-foot should be wary, though: because of the high seating position, head room is a bit limited in the rear.

We’re testing the hybrid version here, but a 1.0-litre mild hybrid is also available on the Kona for the first time. Our 1.6-litre petrol hybrid is good for 139bhp and 195lb ft, all helpfully assisted by the 1.56kWh battery and 43bhp electric motor. It’s a self-charging hybrid - no plug-in here, unlike rivals such as the Captur. Hyundai reasons that if you want more of an electric experience, you can opt for the full EV Kona. The headline sprint takes 11.3sec and fuel economy is 55.4mpg and CO2 emissions 115g/km, efficiency figures that are within the margin of error when compared with those of competitors such the Toyota C-HR. 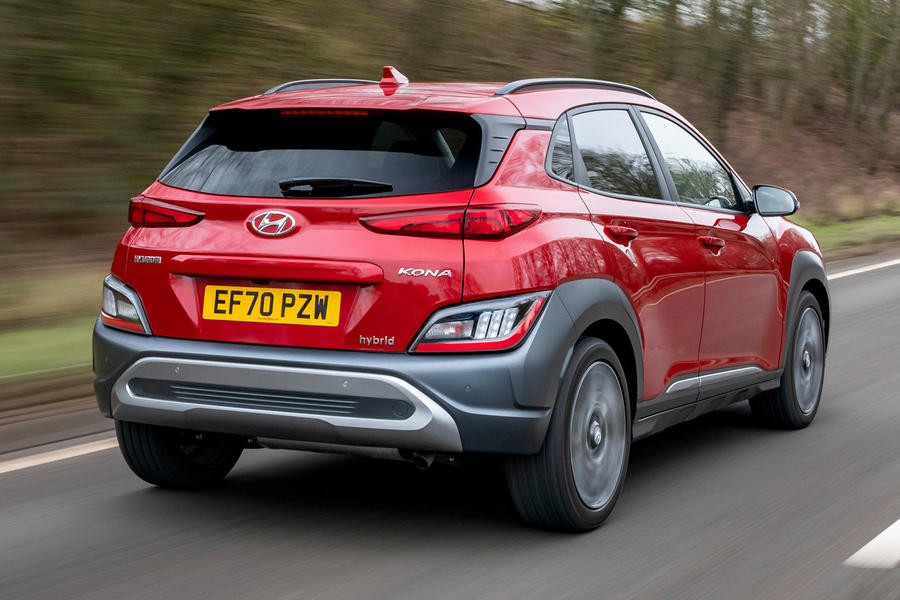 Like the Toyota Prius, it is possible to get the Kona Hybrid running in electric only, but it requires a soft right foot. Any sort of pressure on the accelerator will make the petrol engine kick in. That said, we did manage a sustained cruise at 55mph in electric mode but it requires a lot of will power and a flat road.

The good news is that when the petrol engine is in use, it’s largely a refined and smooth unit. Fast it isn’t, but it’s a perfectly acceptable amount of power for back roads or motorways. The only time you’ll struggle is when you’re overtaking because it lacks punch over 50mph. Passing lorries and the like requires a lot of planning on a B-road. Besides, the engine gets a bit too vocal over 4000rpm so you’re better off accepting that you’ll get to where you’re going eventually and not to worry about getting past that HGV.

A hybrid addition suits the engine. The switch to EV is so smooth that you barely notice it kicking in or dropping out, and it feels like a comfortable fit.

Which makes the gearbox all the more disappointing. It’s a dual-clutch six-speeder, but in full auto mode, it struggles to read the situation so it jerks through the cogs too much. There’s a real lurch when it does - not as bad as on the Smart Fortwo, but the fact that we’re even mentioning that car here makes you realise how poor the Kona’s transmission is. It’s much better in manual, where the changes become barely perceptible, but the Kona isn’t the sort of car where manual is the default choice. A sports car it is not.

Hyundai has made alterations to the suspension, namely tweaking the stabiliser bars and the rear bump-stop. The Korean firm claims it improves the primary ride and lateral body control. It feels better than the last one, but while the car is comfortable for the most part, it’s still a bit firm over sharper bumps. The control is fine and it never gets unpleasant, but for a family crossover that rolls softly through corners, the firm primary ride feels a bit incongruous. 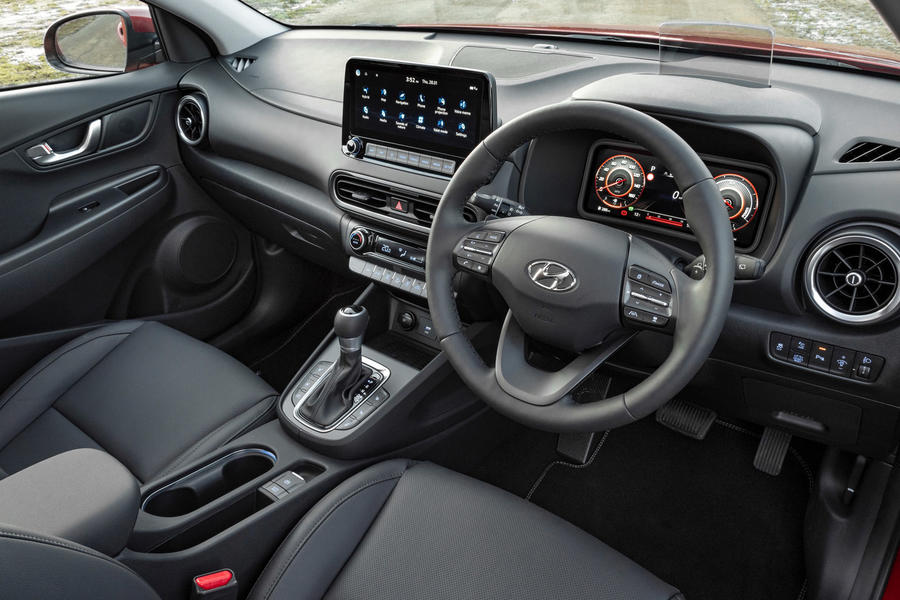 The facelift has taken an already pretty appealing proposition and sharpened everything up. The e-Kona remains the most intriguing of the family - at least until we can drive the production-spec N version - but this hybrid offers a decent compromise if you don’t want to go full electric yet. Just remember to drop it into manual. 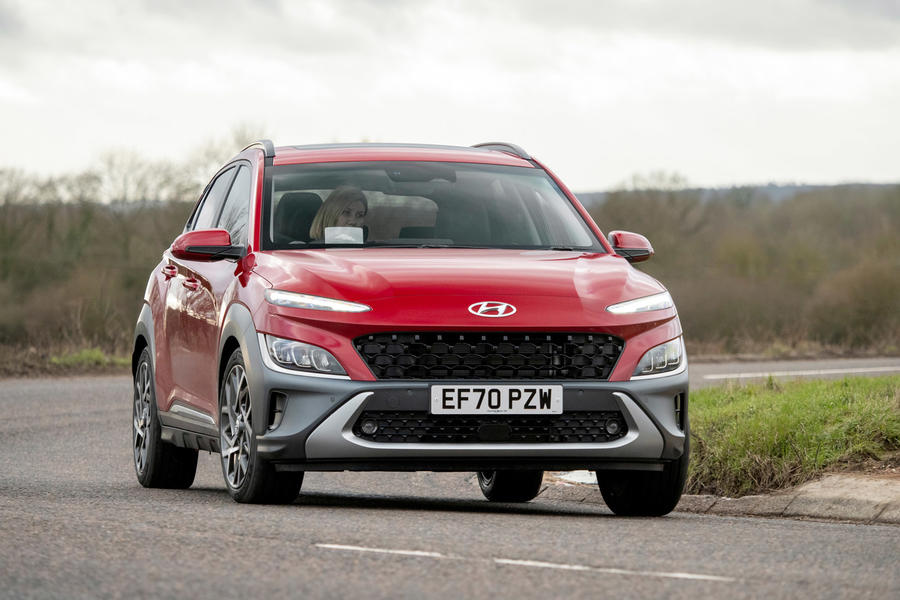 Saying things like the Toyota CH-R and Nissan Juke are not distinctive. Having heated seats justifies an almost 30k price tag. This facelift improves an already appealing proposition.

I thought every motoring journalist thought the Kona was disappointing when it was first launched, let alone after a mild refresh that's only been introduced to justify a price hike.

Avoid this unsafe hyundai junk, hyundai genesis gv80 almost killed tiger woods because of a defect in its manufacturing caused him to crash,

ask yourself when was the last time someone leg was almost disintegrated because of a 35mph crash?

At least it is interesting to look at, rather than devoid of any form of style. Not for me, personally.