From £152,8659
The V12-powered AMR doesn't have the Bentley Continental GT's practicality, but it's a fantastic cruiser nonetheless
Open gallery
Close

To the new management of Aston Martin, the DB11 when launched in 2016 was the equivalent of you moving into a beautiful new home, sumptuously decked out in high-quality furnishings and fittings by the previous owners and all, in their own way, entirely lovely and blameless.

And yet not all of it is entirely to your taste. It's better than acceptable; it's genuinely good, just not quite in certain small but significant ways exactly, well, you. So you end up ripping out a perfectly good kitchen, re-tiling the roof and installing a home cinema, just because you want to.

This DB11 AMR is that house: the DB11 you suspect Messrs Palmer and Co would have delivered from the outset had they been around when the project had begun, rather than arriving when a large amount of its development was already complete. And the fact that the original DB11 V12 is no longer on sale and that the DB11 V8 was far more than simply a DB11 with Mercedes-AMG engine rather proves the point.

The AMR takes many of the developmental changes included in the V8 package and adds to them its own yowling V12 twist. So, there’s not just another 30bhp for the V12, bringing its total up to 630bhp for no more than a few additional lines of software; it also has the V8’s revised suspension bushes for the rear axle, as well as its own damper tune, a thicker front anti-roll bar, a fruitier exhaust note in Sport mode and, probably least appreciated but most important, forged alloy wheels that drop unsprung mass by 3.5kg per corner and explain why the AMR is actually a fraction lighter than the V12 it replaces. 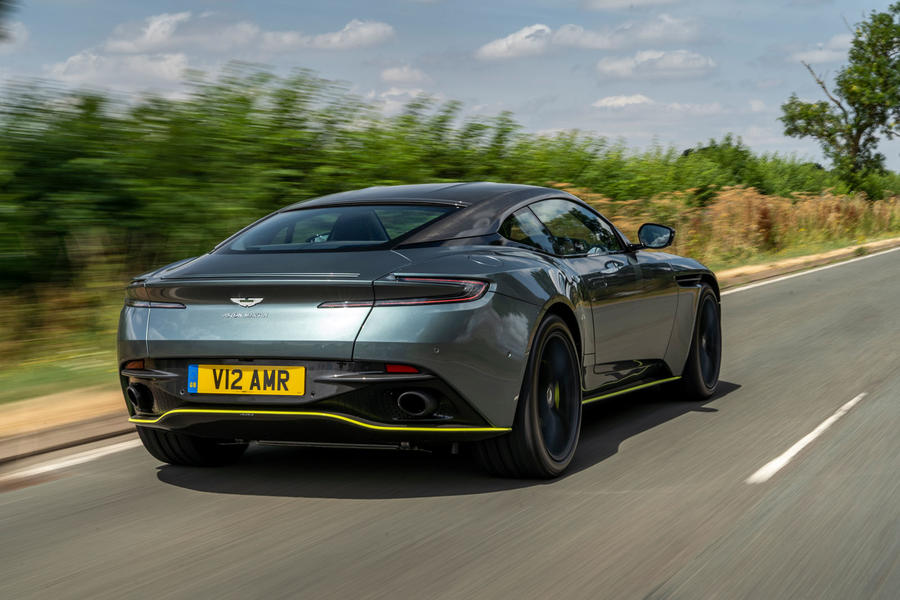 If you’re to find out what the AMR is really like, what you need before you do anything else is a loud and reliable alarm clock. Trying to exercise a car of this performance potential on normal roads at normal times of day is an exercise in futility at best, considerable frustration at worse. You need good roads and you need them to yourself. So, is it worth getting up at the kind of time you used to go to bed just to make sure you’re where you need to be when you need to be there? For the AMR, the answer is 100% yes.

One of many interesting aspects that has been a constant of the always enigmatic Aston way of doing things since David Brown bought the company 71 years ago is that, with the exceptions of the One-77 in the past and Valkyrie in the future, it has never tried to produce the fastest cars on earth, nor the grippiest or the most luxurious. Every Aston has tried to provide an entire palette of talent, and while some have met with greater success than others, the AMR is exceptionally rich and colourful.

More details on the Valkyrie hypercar

So often in this job, we are impressed by the way a car drives in Europe only to discover its composure crumbles at the first sight of the somewhat sterner challenge provided by British public roads. Not the AMR. The figures say it’s a couple of tenths quicker from 0-62mph than the regular DB11, and I don’t doubt them. But that’s not what you notice, partly because the engine’s torque hasn't been allowed to increase by a commensurate amount because the ZF eight-speed automatic gearbox was already right on the limit of what it could handle. It doesn’t feel quicker; it just feels a hell of a lot sharper. Everywhere.

The DB11 exhaust note was always profoundly impressive for an engine forced to breathe through turbochargers, but now in Sport mode it crackles, pops and whizzes in a way that must be manufactured but never seems that way.

But the bigger, better changes have come to the chassis, which is now quite superb. I liked the way the DB11 went down the road more than most, but even I must concede that the AMR is playing a different game. What it has gained is a little traction, a lot of precision and considerable additional stability over brows and in dips. And what very little it has lost in terms of secondary ride comfort is more than offset by this upgrade in primary body control.

The result is a car that allows you to commit to a difficult road with complete confidence. Indeed, the only elements holding you back – the car’s physical size and slightly limited visibility – have nothing to do with the way it has been set up. There are times, usually in quick, constant-radius curves, with the car cranked over yet absolutely nailed to your chosen line, where it seems barely believable that this is also a superbly effective long-distance touring car weighing the thick end of two tonnes (with me on board) and sitting on standard Bridgestone Potenza rubber. And for a car of such heft steered with electrical assistance, the feel of the chassis and steering are of a level that neither the Bentley Continental GT nor even the Ferrari GTC4 Lusso can approach.

On tighter roads, this astonishing fluency is somewhat degraded. Outstanding though the chassis engineers are, they’ve not yet found a way to excuse Aston from the laws of physics. The standard iron brakes offer terrific feel and seem pretty tireless on the road, but you still need to be on them well in advance of any tight corner, especially when it's preceded by a long straight, because the AMR's ability to accrue speed is, relatively, at least as good as its capacity to then get rid of it in a hurry.

And in slow speed corners, there is some push, perhaps a consequence of that thicker front bar, perhaps not, but you are aware of the car’s weight and wheelbase in a way that simply does not cross your mind when the road commands, say, fourth gear rather than second. If you really up the ante and throw it at some very punishing roads, you’ll notice that, while the Sport and Sport Plus damper modes vary the rate and limit the scope of the body movements, you can sometimes feel the stability systems rolling up their sleeves, too, in order to prevent you from taxing it any harder.

But these are very testing conditions and I’ve known cars far lighter, more sporting in set-up and abbreviated in wheelbase to not cope so well as the AMR.

All of which would be highly commendable if the car were still a plausible touring machine. But it’s not: it’s fantastic. Yes, both the Continental GT and GTC4 Lusso have far bigger boots, both are more spacious in the back (the Ferrari notably so) and no, I still haven't come to like the presence of quite so much Mercedes-Benz switchgear in the cabin. But in fundamental terms, like the ride comfort and refinement at a steady cruise, this is a fine long-distance tourer. And if you’re the kind of person who likes to hoover up the appreciative stares when you get there, it’s pretty good at that, too. 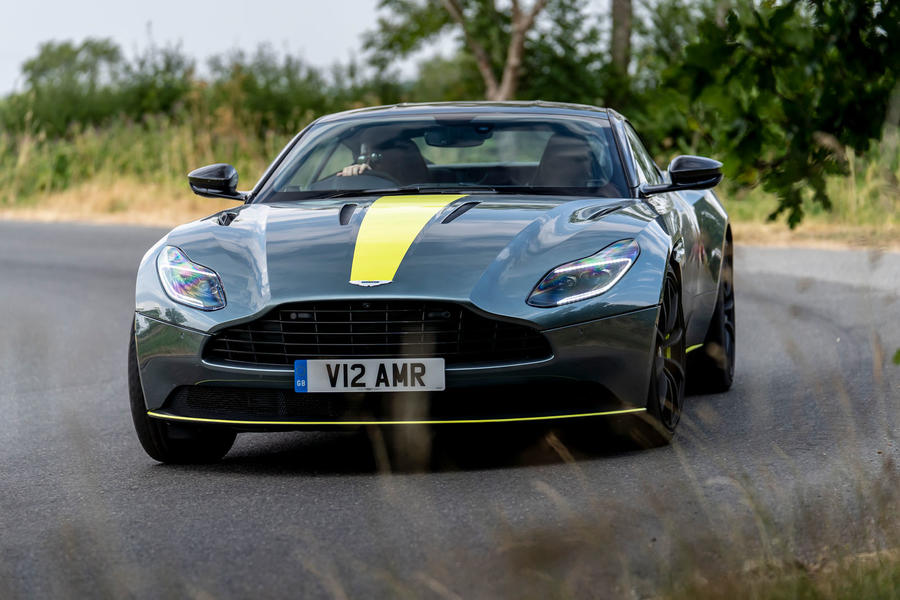 For me, this is best DB11 yet: the V8 would doubtless be more engaging around a track, but that is not what DB11s are for. Just as I found when driving the V8 version of the GTC4 Lusso, there is no substitute for a classic V12 in this kind of car. And while I really like the DB11 V8, the AMR is far more appealing.

The more interesting is with the new DBS Superleggera and whether enough of its additional 85bhp and 147lb of torque could be regularly used when combined with its other attributes to justify the £50,000 price gap between the two. I don’t know, but the fact the thought even occurred to me shows how highly I regard this new AMR.

All grand tourers are compromises. And while some compromises result in nothing more than a Jack of all trades, just a few manage to capture enough from all the diverse disciplines they are trying to exploit for something really rather special to result. The AMR is one of those cars, and as much so as any mainstream production Aston I’ve driven.

It’s charming and capable in the corners, effortless and elegant on the straights. In short, everything you’d ever hope for from an Aston GT.

This DBR AMR is likened to a

This DBR AMR is likened to a home with luxurious furnishings and amenities. I hit the girl on this car.

Nice engine upgrade but the yellow or lime in both exterior and interior looks terrible and make the car looks like an aftermarket product....perfer the spec from the older DB11 V12 where you can spec the silver roof but now the AMR only can spec for Black rooof

A wonderful car and a review

A wonderful car and a review with a bit of soul. Few cars are as charismatic as a big Aston GT. I can see a Rapide version but suspect the DBX will replace that role.
Overdrive 13 August 2018

No hope for rivals!

....the feel of the chassis and steering are of a level that neither Bentley Continental GT nor even the Ferrari GTC4 Lusso can approach....

Sounds like Ferrari and Bentley might as well give up and go home, seeing as they can't even "approach" AMR's level, never mind have any hope of competing with it, eh Andrew?

A wonderful car and a review with a bit of soul. Few cars are as charismatic as a big Aston GT. I can see a Rapide version but suspect the DBX will replace that role.

Yep, great stuff Mr Frankel. And Aston Martin, of course. If this can take an isofix child seat it might just be the perfect car!