You know the Ferrari that’s so amazing and quick that they called it the Superfast? Well, this is a bit like that, but with no roof.

It’s the 812 GTS and in losing the Superfast tag, as is Ferrari’s way (the F8 Tributo with no roof is called simply the F8 Spider), it gains a folding hard-top that can retract while the car’s travelling at up to 28mph, and about 75kg in weight because of the mechanism and the body stiffening required.

What it retains are the elements that make the 812 Superfast what it is. In the front is a 6.5-litre V12 petrol engine with no turbochargers that revs to nearly 9000rpm and, on the way, makes 789bhp (800 round metric horses, which gives it the ‘8’ in its name, with the cylinder count the ‘12’).

That drives the rear wheels through a seven-speed dual-clutch automatic gearbox, and if that amount of power through two driven wheels sounds quite hairy, holding the whole thing together is a complex array of electronics that oversees traction and stability control, the actions of a limited-slip differential, and even a ‘Side Slip Control’ that limits the amount of oversteer. Satisfyingly, being a Ferrari, you can turn all of that off, which can make it a hoot on circuit or mean you come a total cropper, as one mug did on a bridge over the Thames in a Superfast quite recently.

If you wanted to classify the 812, I think you’d call it a ‘super-GT’ car, with rivals including the Aston Martin DBS Superleggera, perhaps a Lamborghini Aventador SVJ, but not too much else. It’s just too powerful and expensive - £293,150 before options, and you’ll be encouraged to tick a few boxes if you come to order a car – for there to be many alternatives. 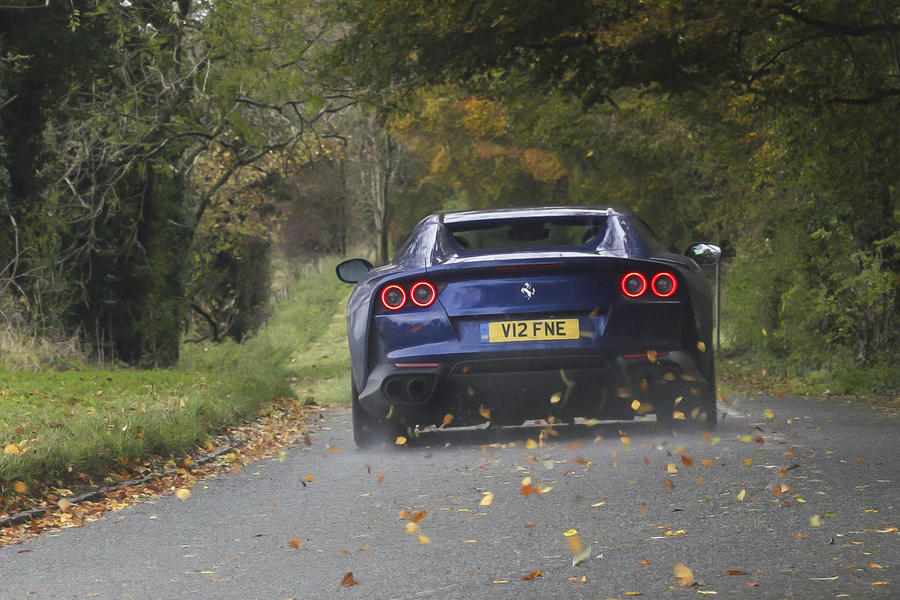 There are only two seats inside – not even tiny rear ones fit only for a Pomeranian – and unlike in a Lamborghini spyder, you’ll find that Ferrari hasn’t taken away seating space to bring you a folding roof: the seats slide just as far back as usual.

They’re well finished and supportive and bring a decent driving position, although some might want the steering wheel – a bit complexly buttoned and squared off, but you get used to it – to reach a little closer. The rest of the cabin is relatively pleasingly laid out, albeit the two small screens behind the steering wheel, which control infotainment and monitor car’s trip computer, fluid and tyre temperature and other systems, aren’t totally straightforward. But I really like the look and feel of the air vents, there’s a cool secondary display in front of the passenger so they can see how fast you’re not going, and it’s all rather nicely designed and well finished. Are those silvery plastics pretending to be metal? Almost, but not enough to convince you, and you know that plastic is lighter than metal, too, so it’s better you don’t believe it. I think.

The engine in this car is a masterpiece. I know revelling in it is all very 20th century and everything but one day we’ll only enjoy internal combustion like this in the same way we know traction engines.

What is it about the noise? Even people who don’t know it know it when they hear it: a V12 that sounds so smooth, sounds so expensive, and so exotic. Just so… right.

And it revs to daft levels for an engine of this size: peak power is at 8500rpm and peak torque, of 530lb ft, doesn’t arrive until 7000rpm. Still, 80% of that is available by 3500rpm and, honestly, that’s quite enough to be getting on with most of the time. The GTS might not have Superfast in its name but it’s not practically any slower: the 0-62mph time is less than three seconds and the top speed more than 211mph.

Ferrari’s dual-clutch gearbox is one of the best on the market, too, so smooth and quick, and even left in automatic mode, it’s amenable, despite it and the stop/start system keeping things as quiet as possible to minimise emissions – although I suppose at 17.2mpg and 373g/km, there’s a limit to what they can do. But shifts are brilliant in manual mode.

And the GTS is enjoyable to drive, too, even at sensible British road speeds. This is quite a big car (4.69m long and 1.97m wide and hard to see the extremities) and, as all modern Ferraris, has ferociously quick steering. I think that’s meant to make it feel more agile, and it probably works. Ferrari claims a dry weight of 1600kg but we weighed a Superfast fully fuelled at 1725kg, so call this one 1800kg with a bit of fuel and some options. Nonetheless, it turns keenly.

It rides well, too. Ferrari has two modes on its adaptive dampers and the ‘bumpy road’ set-up is best for most British asphalt, although it’s good to find a system in which the differences are subtle work well. Clearly, engineers and test drivers get the final nod, rather than departments that really want you to feel a difference in driving set-ups. The steering weight doesn’t change, either, although I know some testers would rather it was a little less responsive.

I think, too, that this feels slightly less manic than a Superfast, although it has been a while since I last drove one. Perhaps the dampers have been relaxed a little, or maybe it’s just the addition of the extra weight, high in the car, but there’s no skittishness or hyperactivity. Obviously, it has 800 horsepower and is rear-wheel drive and it’s November, so you can’t be an idiot, but it’s a real pleasure to drive along roof up or down and enjoy the drama. There’s only a little wind buffeting with the top down and the rear window can be dropped even with the roof up, to let more exhaust reverberations in. 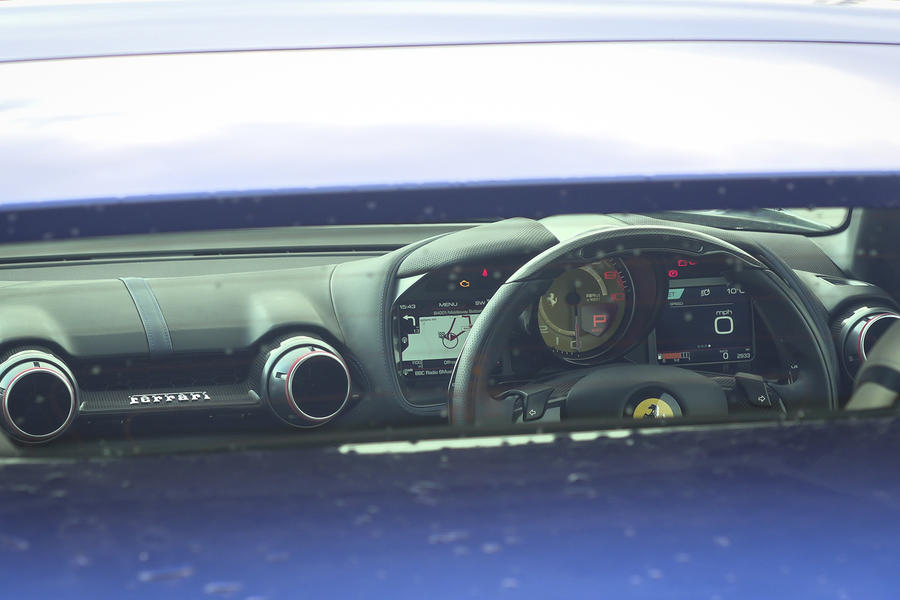 Yeah, probably. I’m very fond of the Aston Martin DBS Superleggera but the 812’s engine is more spectacular, and although a Lamborghini Aventador Roadster has a similarly spectacular power unit, it also has a duff gearbox and is an unashamed old-school supercar rather than a true super-GT.

In our road test of the Superfast, we felt the coupé lacked the lengthy strides its ride needed to truly succeed in its class. With a little weight added, but a more rounded demeanour and barely noticeable chassis flex, the 812 GTS feels like the right character for this car. Really enjoyable. 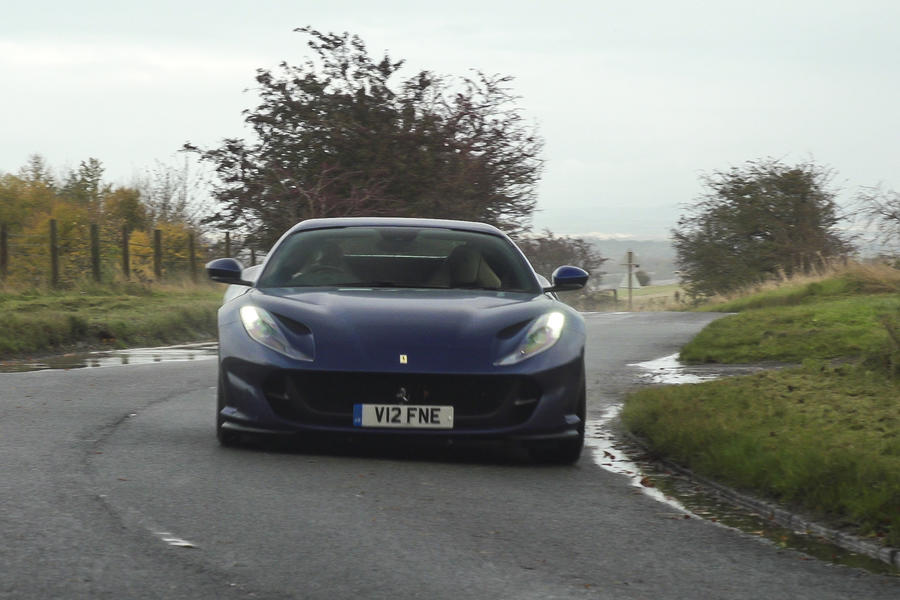 Side on it's still an ugly

Side on it's still an ugly thing. No doubt they'll produce a new version in 2022, based on the successor to the F12/Superfast platform, and it will be much better looking.

Imagine if they made a F12 GTS.

God that's ugly.  I remember a time, not so long ago, when Ferraris were a thing of beauty.  The desire to make beautiful cars has unfortunately left Maranello some time ago, I fear.   Nowadays it is all about 0-60 times and making the cars as fast as possible, regardless of how they look.

If I won the lottery I would be spending £80,000 on an F355 Berlinetta.  A car from a time when they got the design spot on.  And a car you could actually drive on a public road.

You describe the new Ferrari as hideous.
Your opinion, but I doubt you'll have anyone read any future posts.
martin_66 5 November 2020

You describe the new Ferrari as hideous. Your opinion, but I doubt you'll have anyone read any future posts.

And yet, here you are, responding to my post!  Are you my stalker?  Does this mean I am famous now?  Or are you just a bit of a pillock?

What's happened to the Audi etron GT (Audi's taycan) story that was on the website late last night?

Did autocar get the embargo date wrong?