From £5,3457
A quicker, cleaner entry-level engine and better interior makes the bargain basement Sandero even better value, but it's still only average to drive
Open gallery
Close

The Dacia Sandero has stoically remained the entry-level point to the new car market since its launch in 2013 and bargain-hunters can rejoice: even with some upgrades for 2017, it remains the cheapest new car you can buy in the UK.

The facelift includes a reworked front and rear with LED daytime running lights, more equipment inside and a new engine.

Slotting into the bottom of the range as the new entry-level option, a 73bhp 1.0-litre three-cylinder naturally aspirated petrol unit is now available which is (marginally) quicker and more fuel efficient than the 1.2-litre four-cylinder it replaces. It joins the lineup alongside the more powerful turbocharged 0.9-litre petrol triple and 1.4-litre diesel.

The spec upgrades help you get DAB radio and air-con as standard on mid-level Ambiance, while range-topping Laureate models get a touchscreen infotainment system with sat-nav and a reversing camera.

The lineup starts with Access trim for a headline-grabbing £5995 – but you still get very little kit. Ambiance carries a £1000 premium, while Laureate is another £1200 on top of that – all of which, in typical Dacia fashion, represents staggering value. We’re driving the new 1.0-litre engine in Laureate trim, although in the UK this engine will only be available with Access and Ambiance spec levels. 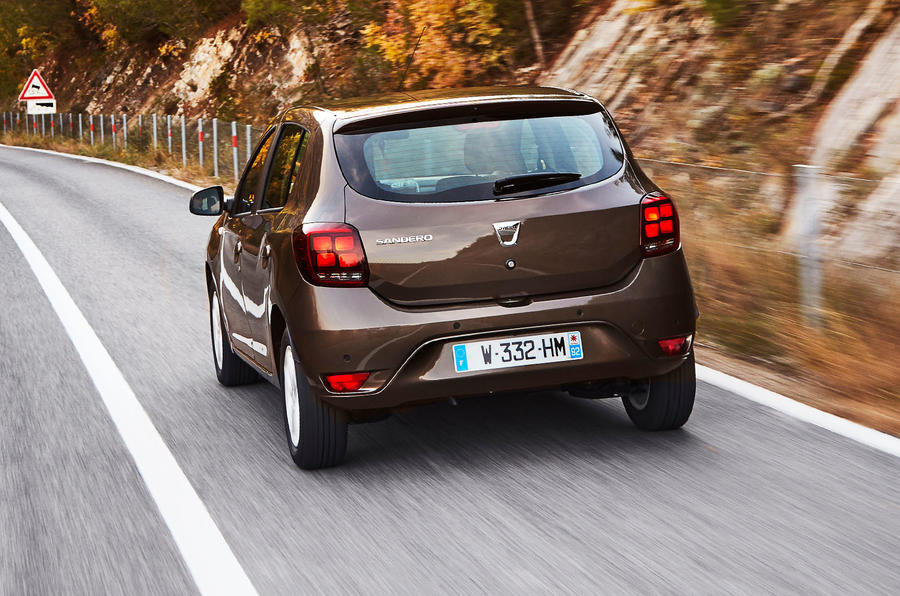 Dacia's new 1.0 is 20kg lighter than the 1.2 it usurps, thanks in part to an all-aluminum block. Indeed, the whole car is light, even by supermini standards, but it doesn’t have much power - it’s peppy enough around town, but you need to keep the revs in the mid range to make brisk progress. At least it’s not too sluggish off the line and the throttle response is sharper than most triples do.

It’s not very refined, though, with engine noise particularly noticeable above 3500rpm, and because you need to drive it hard on faster roads the thrum can become tiresome. It does settle down when cruising, and while this engine will be adequate for most Sandero buyers if you’ll regularly be doing motorway journeys we’d still recommend opting for the greater power in the 0.9-litre engine, even though it carries a £1000 premium.

The new unit is more efficient than the engine it replaces, with CO2 emissions and claimed fuel economy much improved to make it comparable with its rivals like the Ford Ka+, which brings us to the main concern for the facelifted Sandero. 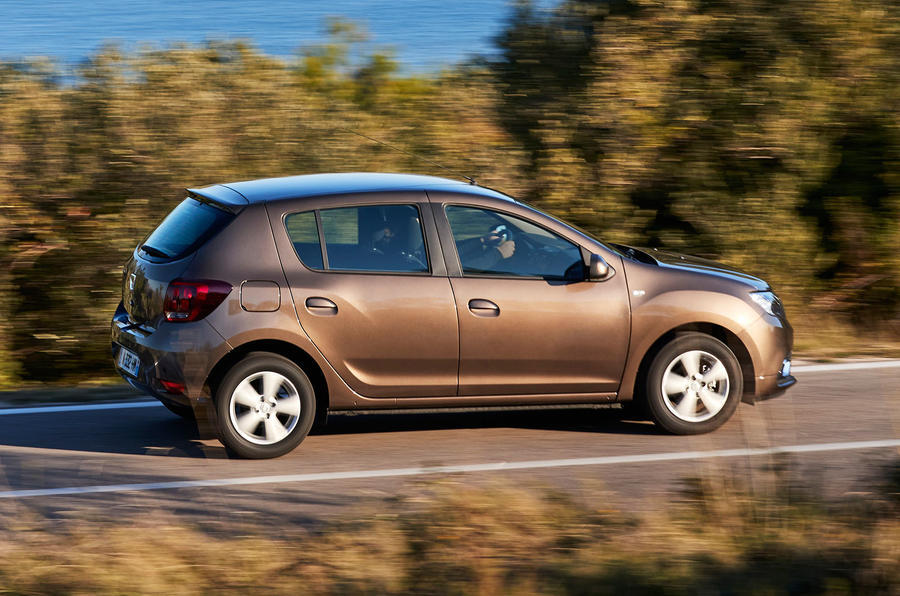 The Ka+ is a new budget supermini that is actually pretty good to drive and rides very well, so the Sandero’s days of lording over the budget end of the segment could be numbered. Especially because, mechanically, the facelift is unchanged from the model it replaces. That means it’s still not an engaging or fun car to drive, but for this price that’s no surprise, and its handling is at least accurate, if not exciting. The car has a soft suspension set up so the ride is ok and it’s quite composed but it’s inconsistent, managing to soak up most modest imperfections at low speeds but it doesn't take much to unsettle it.

The Sandero does have two trump cards to play on the Ka+: price and space. It’s considerably cheaper than the Ka+, and you’ll struggle to find a small car that packages its space on offer so effectively, especially for passengers in the rear. Its tall body means there’s plenty of headroom, and legroom isn’t stingy either.

The boot, meanwhile, is a practical size and will fit a couple of big suitcases in without any trouble - although there is a rather large loading lip.

Inside there’s been a decent step up in the level of standard specification for each trim. It also gets some better quality materials, with flashes of chrome throughout the dash, and a new steering wheel, which is far more tactile than the previous unit, all of which makes it less obvious that you’re sat in the cheapest new car in the country. 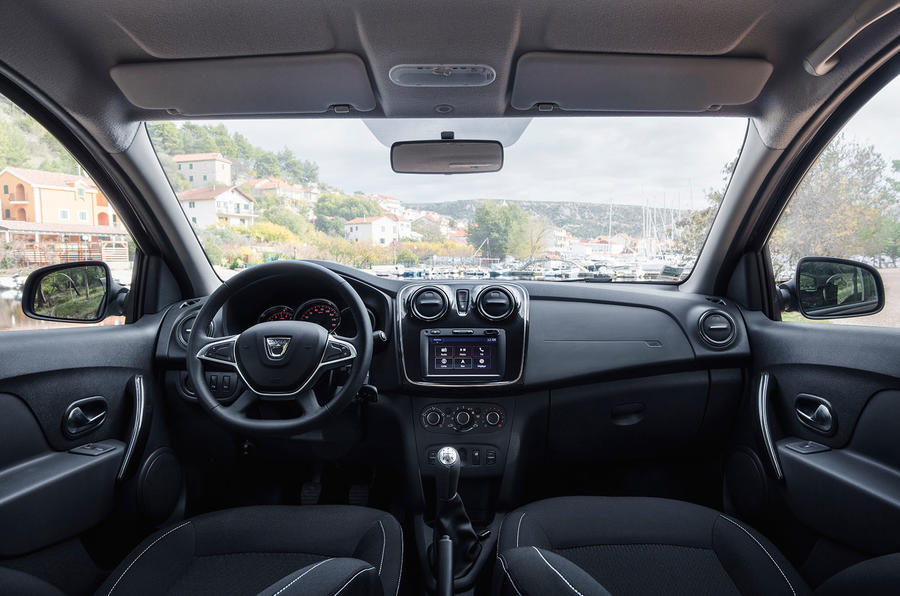 Ultimately, while the Sandero lacks the accomplished dynamic finesse of more expensive superminis, its jaw-dropping value will always make it worthy of consideration for anyone on a tight budget.

This new engine is an improvement on the model it replaces, and will cater for most prospective Sandero buyers. If you can stretch to it, cars like the Ka+ and Skoda Citigo are much more satisfying to drive, but the Sandero’s price, practicality and its upgraded interior means it still mixes it with them.

A bargain barge for sensible people

I love Dacia. Our family of car freaks owned a Logan 1.2 which we sold on fairly recently. Yes, the 1.2 was far too slow for a car of that size but it revved away willingly all the way to a rather desperate 70 on the motorway. The diesel will be as all Renault 1.5dCi engines are (Excellent) and the 0.9TCe is likely a peach too. I honestly do find myself struggling not to see the appeal of this car. It's prettier than before, its equipped with all the essentials of the modern motorist and a few bits besides too. it's super cheap to buy, insure and run. The only thing I found about the Logan was nowhere near enough lumbar support but that can be resolved cheaply with car cushions. When spending so little on a brand new car (with a new warranty) one can't help but feel fine about a cushion!
stumpys182 15 December 2016

Thank the Lord that Ford exists! If it didn't, what the heck would Autocar use to benchmark EVERYTHING else with! If its not the all-conquering Fiesta showing the world how it should be done, then its the outstanding engineering masterpiece that is the Ka+. I really don't know why any other manufacturers even bother, when clearly Ford has the whole thing in the bag!
poon 12 December 2016

As already mentioned this is an honest car. You buy it, don't have to worry about it being stolen and run it into the ground. You should easily get 80,000 miles out of it.
View all comments (8)