Until last year it was a 40-year Citroën tradition that the marque’s biggest and most expensive model should be a large, likeable, slow-selling and fast-depreciating business saloon. In 2019, however, the company corrected that mistake by launching a handsome and distinctive SUV flagship, the C5 Aircross, though even that failed at first to join the electrification bandwagon that was already rolling fast.

Now Citroën has remedied this shortcoming with a new two-model range of C5 Aircross plug-in hybrids that catapults it to the front rank of SUV efficiency. The entry-level Flair model costs a very reasonable £35,370, considering it comes with equipment like climate control, air-con and traffic-monitoring navigation, but the bargain is the Flair Plus, which costs barely £1500 more while adding more ornate 19in alloy wheels (instead of 18s), half-leather trim, an electric-adjust driver’s seat, radar cruise control and a hands-free motorised tailgate.

The new PHEV powertrain takes the PSA Group’s Puretech 180 1.6-litre four-cylinder petrol turbo engine, good for 178bhp, and mates it to an 80kW electric motor in the standard eight-speed automatic gearbox to make a powertrain with a maximum power of 222bhp and maximum torque of 369lb ft. Most of that torque is available from standstill – which is a powerful reason why this front-drive-only model's generous retinue of driver aids (lane-departure warning, blind-spot monitoring, parking sensors, colour reversing camera) needs to be topped by a very effective traction control. 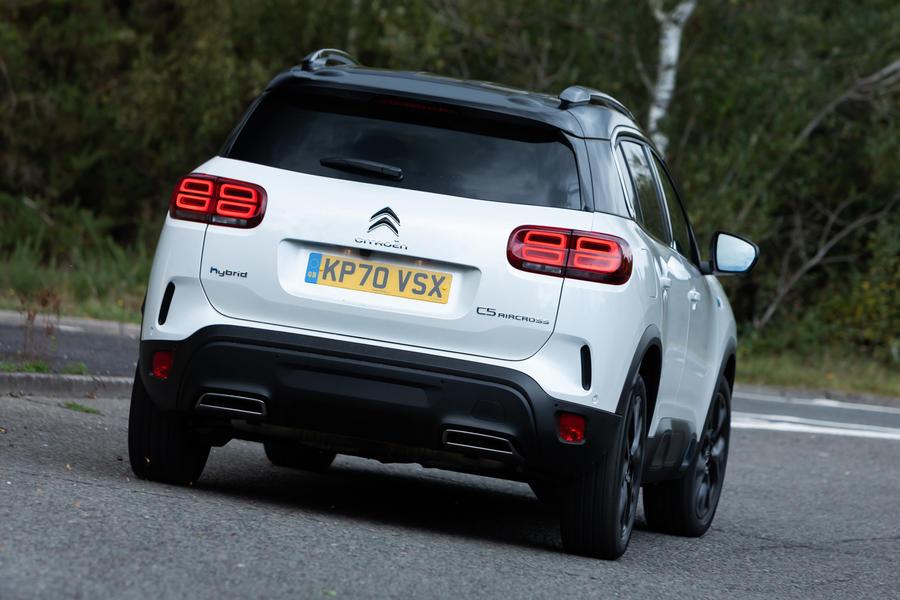 Handsome, for a start. Most people agree that Citroën’s latest design style – chevrons attractively integrated into the bonnet, “technical” lights, Airbumps along the doors – give its latest range a distinction and a cohesion it never achieved before. It’s also better looking, you could argue, than its siblings from DS and Vauxhall, and on a par with the (quite different-looking) Peugeot.

Same goes for the interior. Our Flair Plus test car (which for once carried only £1000 worth of options: a Black Pack and metallic paint) had a simply designed but classy fascia with large, high-mounted central screen and an instrument set ahead of the driver.

The seats are wide and comfortable, though they don’t have much side support in corners and are actually described in the maker’s blurb as “flat”, which doesn’t sound much of a compliment to the seat designer’s art. Still, they’re comfortable with generous cushions and good lumbar support. The rear seats and surrounding space are okay for adults, though the rear compartment feels a little gloomy.

The plug-in Aircross’s battery, carried under the rear seat, is claimed to be good for up to 34 miles and to take about two hours to charge. After four or five tests in real-world use, we found the car could usually achieve 30 miles, and never less than 28, before the motor was needed.

Using our 7kW home charger, a full charge took about two hours and 20 minutes to complete. And though the combined WLTP fuel consumption figure (especially untrustworthy because everyone’s driving/charging regime is different) is quoted as 157-222mpg, with an accompanying CO2 output of just 32g/km, our own 480 miles of varied use netted a grand total of 108mpg – still impressive – with around 44% of electric-only running.

Driving is mostly a pleasure. The car glides about in its electric mode, with a precise and highly predictable step-off that shades most purely petrol cars. Acceleration is strong up to about 60mph, and the car will cruise at about that speed, electric only, though anything more than sustained suburban speeds depletes the battery quickly. You’d battle to see more than 15-18 electric-only miles on the motorway.

There are three driving modes: electric only (works best in town), hybrid (for which the system itself decides how to match engine and motor, depending on demand) and Sport (where both power units combine for top performance). If you start in town, it’s likely that even in hybrid mode you’ll exhaust the battery power before the engine starts. If you hit an A-road, the engine will chime in to assist, saving the battery for later.

It all works well: integration of the power units and transmission is seamless and extremely smooth and quiet whatever setting you’re using. It’s quite quick off the mark for a car of this style: a 0-62mph sprint takes 8.7sec, with the real surge in the first 30-40mph, which is why in slippery conditions this two-wheel-drive car needs its traction control. The steering and handling are easy and precise, save for an intrusive lane-departure system whose 'off' switch is hidden behind the steering wheel. Switching it off is a necessity for easy progress, but also a distraction.

Citroën makes great play about ride comfort, and especially its weirdly named Progressive Comfort Cushions – hydraulic bump rubbers – and most of the time the promise if fulfilled: the car offers a thoroughly decent mixture of suppleness and body control. It’s quiet over bumps, too, and our test car had no trim rattles. Its one foible is the way it deals with typically British bitumen ruts, which can occasionally be untidy and obtrusive. The rest of the car’s behaviour is so good, however, that we wonder whether the 19in wheels are at fault here. It’s an even bet that this car was developed on 18s and the 19s were added mainly for marketing reasons. The low-speed bump thing isn’t a deal-breaker. It’s just a pity when the rest of the time the car provides such an easy-driving experience. 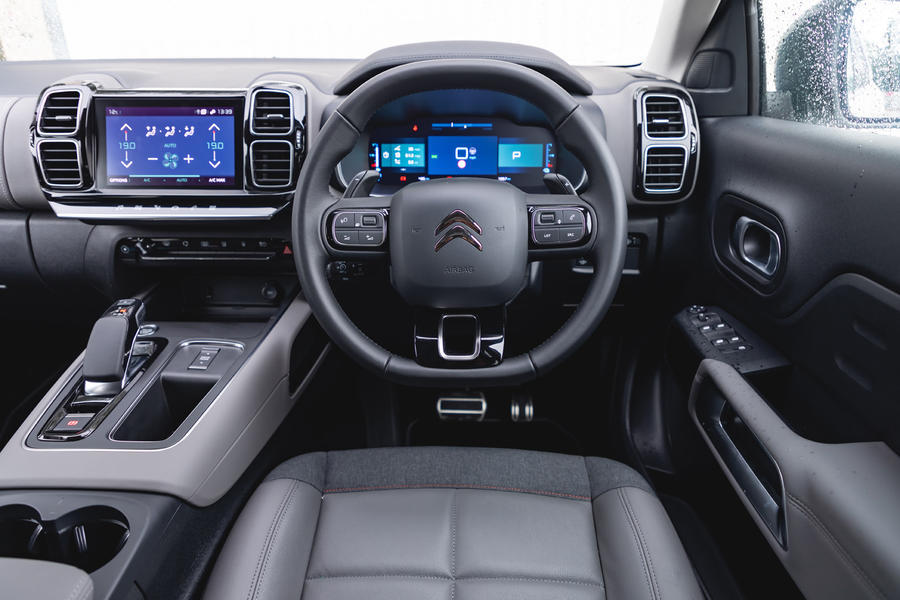 It’s definitely a strong option, but there’s a huge amount of competition. The price is good, the C5 Aircross looks and drives well and it’s well-equipped, though we were a bit surprised by the lack of standard seat heaters in the Flair Plus model that seems to have quite a lot of stuff that’s less handy.

Of course, you now have various family equivalents from PSA group members DS, Peugeot and Vauxhall to choose from – all similar under the skin – plus Mitsubishi’s perennial Outlander PHEV and a plug-in Kia Niro. So the choice isn’t straightforward. But the Citroën certainly deserves to be regarded as a leading contender. 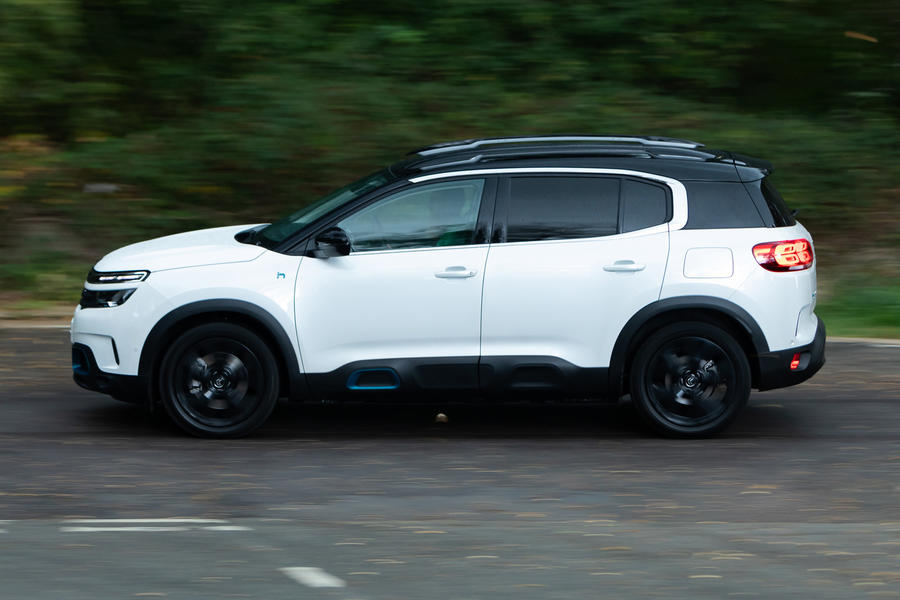 Just cant believe they cant come up with a decent testing measure, this figure makes the new testing regime look stupid, cant argue with a top speed of 140 though. Put it up against 37k worth of XC40, Q3, Tiguan.

That might be difficult. According to Autocar there is no PHEV Q3 or Tiguan, and the smaller XC40 PHEV starts at over £41,000.

That might be difficult. According to Autocar there is no PHEV Q3 or Tiguan, and the smaller XC40 PHEV starts at over £41,000.

Should have said it didnt have to be a phev tax dodger version. As a private buyer after spending  37k on car the extra fuel cost a year is neither here nor there

Just cant believe they cant come up with a decent testing measure, this figure makes the new testing regime look stupid, cant argue with a top speed of 140 though. Put it up against 37k worth of XC40, Q3, Tiguan.

One of the very few

One of the very few production cars with a decent interior. Looks good, no doubt it works well too. Yes the seats do look comfy.