9
Limited-edition road-legal Caterham track car is a superbly enthralling drive, with enough creature comforts to be used on the road as well. Even more addictive than most of its rangemates
Open gallery
Close
by Dan Prosser
25 July 2017
Share

If you’re familiar with Donington Park, you might just recognise this car’s colour scheme: the blue and white of the circuit’s kerbs and tyre walls and the flash of red that’s borrowed from its logo. This is the Caterham Seven 420R Donington Edition, a car that jointly celebrates 60 years of Caterham Cars and 40 years since the reopening of one of Britain’s prettiest circuits.

Rather than being a full factory model, the Donington Edition is the work of BookaTrack Caterham (for the uninitiated, BookaTrack is the renowned trackday company that recently secured the Midlands Caterham franchise, its showroom located at Donington Park). Just 10 such cars will be built, priced at £47,500 apiece, with orders being taken now.

The 420R sits right below the unhinged 620R in the Caterham line-up. It doesn’t have the supercharged model’s frenzied power output but, with 210bhp from its 2.0-litre Ford Duratec motor, and weighing no more than 560kg, it is still terrifyingly fast. In fact, its power-to-weight ratio is comparable to that of a McLaren 570GT.

The Donington Edition isn’t just a 420R with a new colour scheme, though. Unlike the regular model, it uses a six-speed sequential gearbox (the same transmission that’s found in the 620R and Caterham’s top-spec racing cars). It also has a competition roll cage and aero screen – there’s no windscreen or roof option whatsoever – as well as racing springs and dampers. The suspension rates and geometry have been tuned specifically for this model. 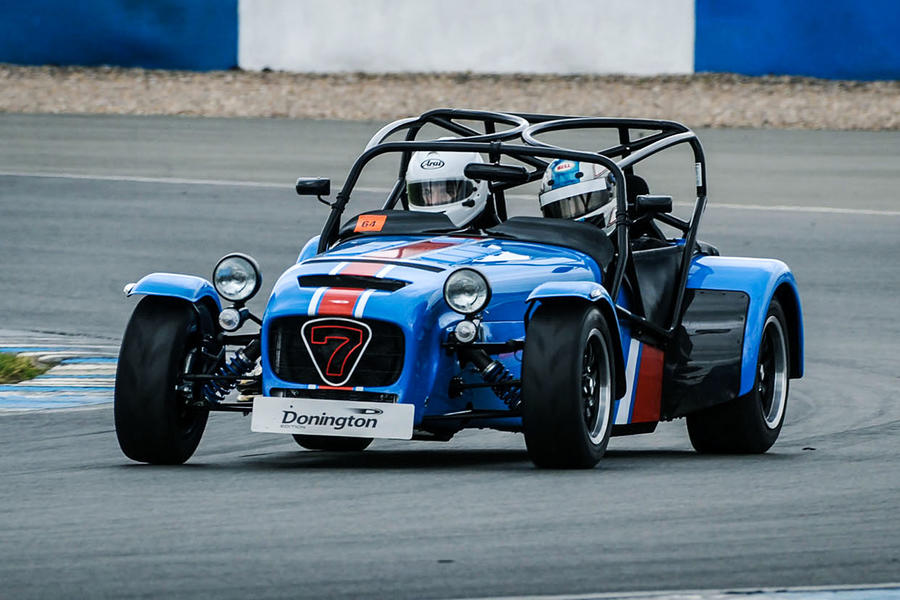 In fact, in many ways, the Donington Edition is simply a road-legal version of the cars that compete in Caterham’s top-flight racing category (until last year, the series was labelled R300-S, but for 2017 it was rebranded 420R to bring it in line with the company’s range of road cars). The differences between the two Sevens are minimal: the Donington Edition still uses a race clutch but it’s not as tricky as the competition car’s; it features a rear exit exhaust that complies with trackday noise limits; and it does away with the racing car’s expensive carbonfibre wings. There are a handful of other minor differences, too, but as far as all the stuff that determines the driving experience goes, the two cars are basically one and the same.

It’s no wonder the Donington Edition feels a lot like the 420R competition car from behind the wheel, then. It has the same frantic straight-line speed and the same on-the-nose feel in the corners. In fact, it’s every bit as intoxicating on circuit as the full competition car, every bit as much fun to hustle around a lap. All that’s missing is a handful of identical cars over your shoulder desperately trying to find a way past.

"We wanted to bring the 420R racing car experience to trackday drivers in a road-legal model," says Stuart Foulds, the BookaTrack Caterham workshop manager who developed the car and will personally build all 10 examples. "We set out to make an accessible but fast trackday car. It’s almost as quick as the racing car, but it’s fairly easy to drive and it isn’t on a knife-edge. It doesn’t have any weather protection so I don’t envisage them being used on the road much, but it is actually pretty good to drive on the road. I hope in 20 or 30 years, it’ll be a sought-after model." 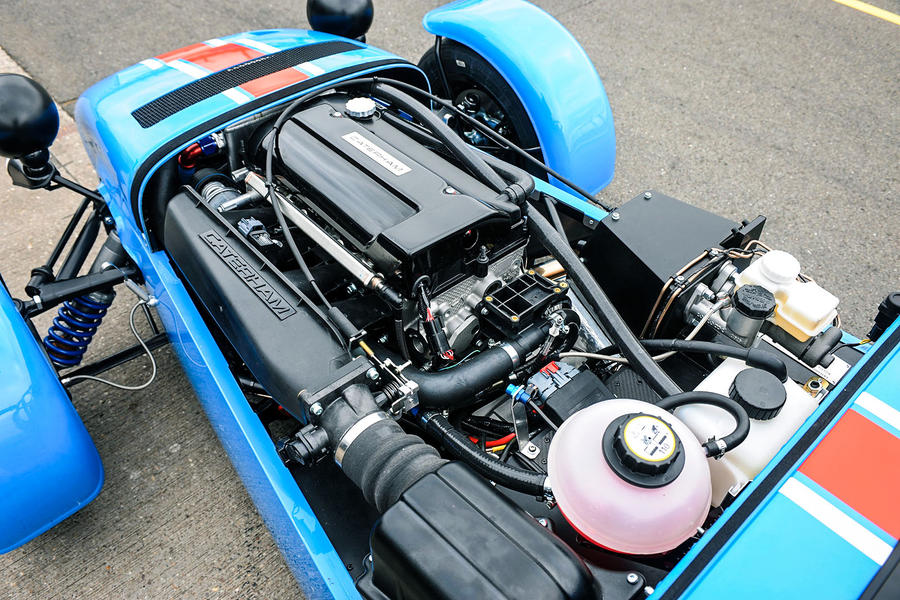 The Donington Edition is Foulds’ idea of the perfect trackday Seven. It therefore cherry-picks the most track-appropriate components from the Caterham range; the 620R nose cone with its bigger oil cooler; the ultra-sticky Avon ZZR tyres; a plumbed-in fire extinguisher; and a limited slip differential. It also borrows the 620R’s carbonfibre dashboard and each car will carry a plaque with the name of one of Donington Park’s corners inscribed on it. The car is also available with the longer, wider SV chassis.

As you lower yourself down into the cabin through the intricate cat’s cradle roll cage, you’d swear you were getting into the competition car. Once in, though, you quickly notice the differences. Whereas the racing car uses sections of foam that are moulded for each individual driver, the Donington Edition favours conventional seats. And whereas the racing car features fiddly six-point harnesses, this car uses a simpler four-point system. The dashboard is also peppered with buttons for headlights and heaters that you don’t get on the competition car.

You forget all of those minor differences within two sharp tugs of the sequential gearlever, though. The Donington Edition captures all of the focus and intensity of the competition car and you soon find yourself getting faster and braver with every lap, just as you do in the racing car. You know when you’re getting on top of a track-focused Caterham when you start taking corners a gear higher. You soon realise that bends you had approached in third were better taken in fourth; you carry more speed in, keeping the car up on its toes through the corner rather than overkilling it and letting it sit down, which means you’re travelling way faster come the exit too. That’s when lap times start to drop.

Track driving can sometimes feel like you’re merely pointing a car from braking point to apex, and then to some point out on the exit in a disjointed, inelegant two-step. But when you feel the car flowing through corners, when you link one bend with the next in a smooth and graceful dance, you realise what it’s all about. Once you start getting on top of it, the Donington Edition flows beautifully.

It isn’t particularly physical to drive, but it does demand all of your attention. There’s enough roll and lean built into the chassis that you can feel it working beneath you, just like the competition car, but whereas the racer can be quite snappy at the limit, the Donington Edition is altogether friendlier and more approachable. When it starts to slide, it does so progressively and it can be held in a drift, rather than spinning suddenly or violently snapping straight again. 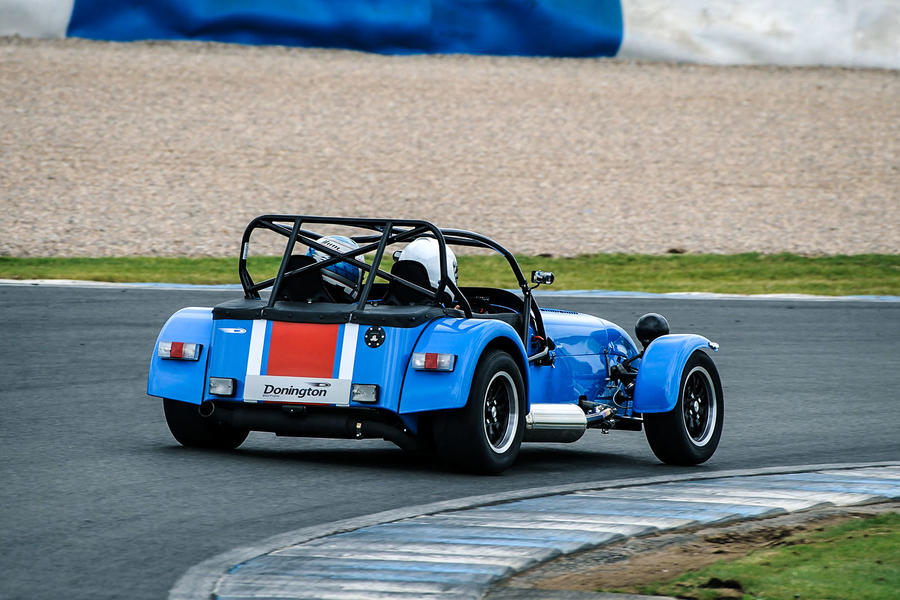 Even so, this car has so much front end that you can agitate the rear just by turning in too abruptly. That aggressive balance gives it massive turn-in ability and huge cornering grip. The brakes, meanwhile, take just about as much pedal force as you can muster once the tyres are warm and they simply never fade.

What really makes the Donington Edition feel like the racing car, though, is the drivetrain. The engine is raw and dramatic, revving out with a frantic top end. Pulling gear after gear with your foot flat on the accelerator, clutch pedal untouched, is just so exciting, and banging down through the gears as you approach a corner with just a kick of the clutch pedal actually makes you feel like a racing driver.

The more pertinent question may be: "Why not just go racing?" Lining up on a grid with a car beside you and a number on your nose cone is still the most thrilling Caterham experience money can buy.

But the 420R Donington Edition is a very fine substitute that you don't need a trailer to transport to and from your circuit of choice, or even to go racing to enjoy. 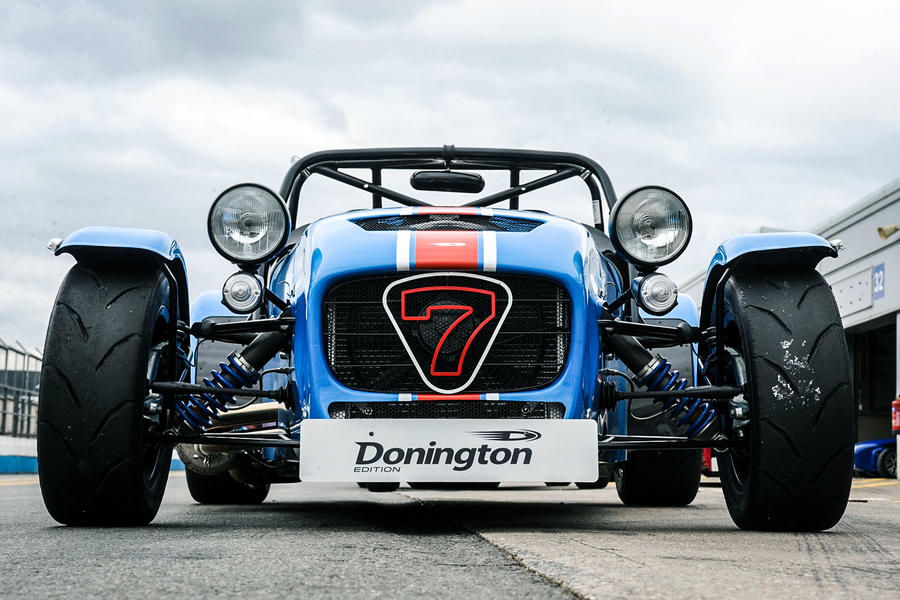 Peter have you ever driven a Caterham, it's the most thrills for the least money new car available which can easily embarrass much more expensive cars