From £72,0659
Comfort-conscious yet also strong and athletic, this large SUV is the incredibly bold new flagship for BMW’s family of electric cars
Open gallery
Close

We’ve waited a long time for the iX. Originally previewed by the Vision iNext concept at the Paris motor show in 2018, it’s BMW’s third EV, following the BMW i3 and BMW iX3.

BMW sees the introduction of the distinctively styled large SUV as a watershed moment in its transition from traditional internal combustion engines towards an all-electric future, suggesting the lessons learned in its development will influence new models such as the imminent i4 executive saloon and electric versions of the next-generation 5 Series and 7 Series.

The iX is meant to convey a new form of relaxed driving pleasure. With power outputs ranging from 326bhp in the xDrive40 to 600bhp-plus in the yet-to-be-revealed M60, though, performance remains a priority, despite the weight penalty incurred by a large battery pack.

The lack of a number in the model’s name is meant to signal its positioning as the flagship of BMW’s i sub-brand. Although the radical lines of the Vision iNext have been watered down for production, there’s still no denying that this is a BMW like no other.

The basic proportions follow those of the BMW X5. However, the surfaces are super-smooth and a lot more rounded. And rather than serving as an air intake, the giant kidney ‘grille’ is a composite panel that’s transparent to various sensors behind it, which are used for the car’s many driver assistance systems. The slim headlights, meanwhile, use the latest LEDs and can be ordered with BMW’s Laserlight technology.

For the first time on a BMW SUV, the doors are frameless and do away with conventional handles for an electronic mechanism. The polygonal wheel arches – a feature brought over from the concept – form an integral part of the body sides. And there’s a wraparound look to the rear end, with thin horizontal LED tail-lights integrated within the tailgate to accentuate the car’s width.

Our test car had optional 22in alloy wheels with performance-oriented 275/40-profile Bridgestone Alenza tyres, providing it with a suitably confident stance. At 4953mm long, 1967mm wide and 1695mm tall, the iX is 15mm longer, 37mm narrower and 53mm lower than the current X5. It also has a wheelbase 28mm longer than its ICE-powered sibling’s.

The smooth and unadorned exterior, combined with a fixed bonnet, a flat underbody, low-drag wheels and other detailed measures, nets the iX a drag coefficient of just 0.25 on standard 20in wheels – close to the class best.

It sits on a heavily modified version of BMW’s CLAR platform, mated to a “carbonfibre cage”. The lightweight inner body structure supports composite body panels, providing it with greater rigidity than any other BMW. The upshot is that our car weighs 2510kg at the kerb – 475kg more than the petrol X5 xDrive40i. The iX has two electric motors: one at each axle driving through fixed-ratio transmissions to enable it to vary drive between the front and rear wheels depending on driving conditions across two driving modes: Efficiency and Sport.

In the xDrive50 variant driven here, the front motor makes 254bhp and 269lb ft and the rear motor 309bhp and 295lb ft, combining for maximums of 516bhp and 564lb ft. A 105.2kWh lithium ion battery pack operating at 380V is mounted underneath the floor and within the centre tunnel, providing the iX with a low centre of gravity and a range of between 341 and 392 miles. Our testing suggested that you will be able to exceed 300 miles between charges with regular driving. 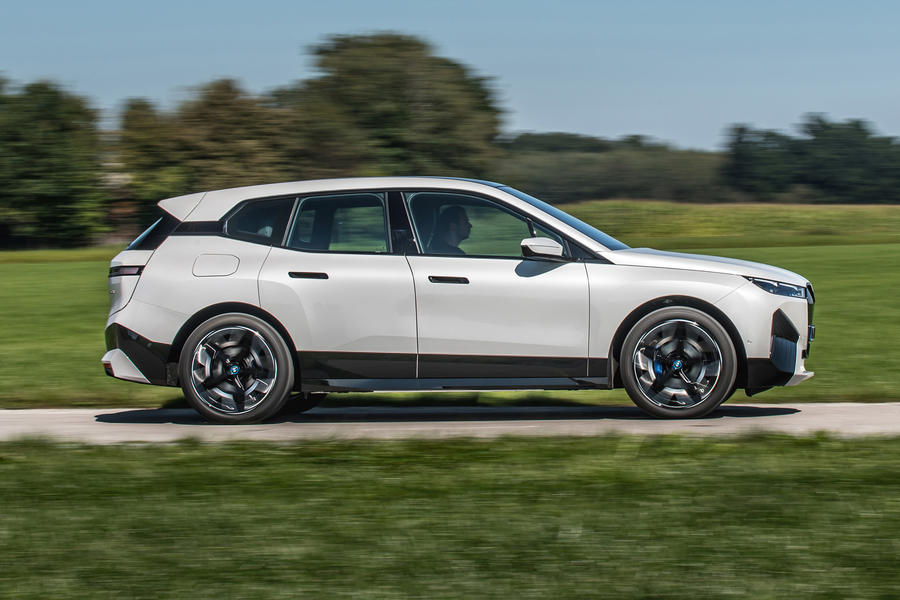 As with the exterior, the interior represents a new direction in design. Opening the frameless driver’s door reveals the lightweight construction methods through swathes of unpainted carbonfibre concentrated within the sills, pillars and other sections of the inner body structure.

The first thing that grabs your attention, though, is the hexagonal steering wheel. The screens for the digital dials and infotainment, meanwhile, are grouped together on a single free-standing curved display atop the low-mounted dashboard.

The latter can be controlled via touch or conversational speech commands as well as BMW’s traditional rotary controller, which was fashioned from crystal glass on the iX we tested. Buyers can also specify gesture control.

BMW has further refined its iDrive system for the iX, which is the first model to receive an eighth-generation version. One notable change is a separate climate menu that can be accessed at all times without you having to dig deep into the menu layers.

Thanks to the long wheelbase, there’s no shortage of rear-seat accommodation. But due to the flat floor and subsequent lack of footwells, your feet are positioned quite a bit higher than in other CLAR-based BMWs. Perhaps oddly, given the size of the iX, there’s no option of a third row of seats.

Boot space, meanwhile, is a somewhat disappointing 500 litres (160 less than in the rival Audi E-tron and 150 less than in the X5), due to a high floor necessitated by the packaging of the charging system. This increases to 1750 litres when the split-folding rear seats are stowed.

A full-length glass roof with optional control that allows you to automatically dim the amount of sunlight entering makes for a bright environment inside. BMW has also included a lot of recycled materials within the interior. The material used for the seat coverings, for example, is a microfibre fabric made of polyester.

The driving experience of the iX is predictably well distinguished from that of the X5, and not only on account of the electric powertrain. The emphasis is on comfort and refinement – both of which are clear strengths. There will be more powerful versions of the iX promising greater performance in time, but the balance struck by the xDrive50 should suit a wide range of potential buyers. Step-off is sharp in Sport mode - but isn’t kick-in-the-back aggressive, like some battery-propelled rivals. Rather, it has been programmed to deliver a smooth surge of propulsion from the off, after which it gathers speed very smartly.

The claimed 0-62mph time is no match for the Tesla Model X, but it betters that of the E-tron, Jaguar I-Pace and Mercedes-Benz EQC. The acceleration is instant, and with all that torque in play, there’s plenty of it, accompanied by a faint but never disturbing whine from the motors under load. There’s no discernible trailing off of performance like in the Model X after multiple surges of acceleration, either.

A newly developed software package for the four-wheel drive system provides outstanding traction, with anything from pure rear-wheel drive to permanent four-wheel drive with torque-vectoring functionality for the rear wheels. The solid reserves and high-revving qualities of the motors ensure that the iX continues to feel engagingly strong well into three-figure speeds, despite its single-gear transmissions and increasing aerodynamic drag.

The energy recuperation can be operated either automatically or manually, the latter offering high, medium and low strength via steering wheel-mounted paddles. As well as using various sensors to vary between coasting and braking, the automatic recuperation taps into the sat-nav data to provide constantly adaptive qualities depending on the route and terrain. It’s simple to use and very intuitive.

Knocking the stubby gear selector across into ‘B’ brings maximum braking effect, allowing you to come off the throttle and rely on the strong deceleration to wipe off speed and eventually come to a halt without touching the brake pedal. So configured, it also acts as a hill-holder, keeping the iX stationary until you’re ready to set off again.

The serenity of the powertrain is combined with particularly well-suppressed wind noise. Our car’s performance-based tyres did prove sensitive to road surface changes, but we suspect the standard rubber will be less prone to such noise. In any case, the iX sets new levels of refinement for a BMW, delivering an abiding sense of calm and tranquillity in everyday driving.

The xDrive50 is underpinned by a double-wishbone front and multi-link rear steel suspension with BMW’s lift-related dampers as standard. Air springs and adaptive dampers, like those fitted to our test car, are available as an option.

The electromechanical steering is lightly weighted by BMW standards, although it’s quite incisive in its action, delivering an engaging sense of precision on turn-in. This directional responsiveness in combination with outstanding all-round purchase ensures the car remains contained and predictable along winding roads, although the handling is ultimately limited by the weight of the battery, which contributes to an early onset of roll and in doing so defines how much speed you can carry through corners.

Still, for an SUV of such mass, the iX is commendably wieldy. Its four-wheel drive system is programmed to provide a rear bias, but you have to be quite committed in Sport mode before this is noticeable. The stability and traction control systems, meanwhile, are well judged, remaining unobtrusive until they’re really required.

The iX rides well in Efficiency mode on smooth-surfaced roads, delivering impressive vertical body control and, with the optional air springs and adaptive dampers, an ability to absorb road shock over smaller imperfections without deterioration in overall compliance. But again the effect of its generous kerb weight is noticeable over larger transverse ridges and deep potholes, where it sometimes struggles to maintain composure.

An ability to charge at rates of up to 200kW from a DC system gives the iX a distinct advantage over the I-Pace, EQC and Model X in terms of charging time. BMW claims a 0-100% charge takes as little as 35 minutes, or some 11 hours from an 11kW AC system. 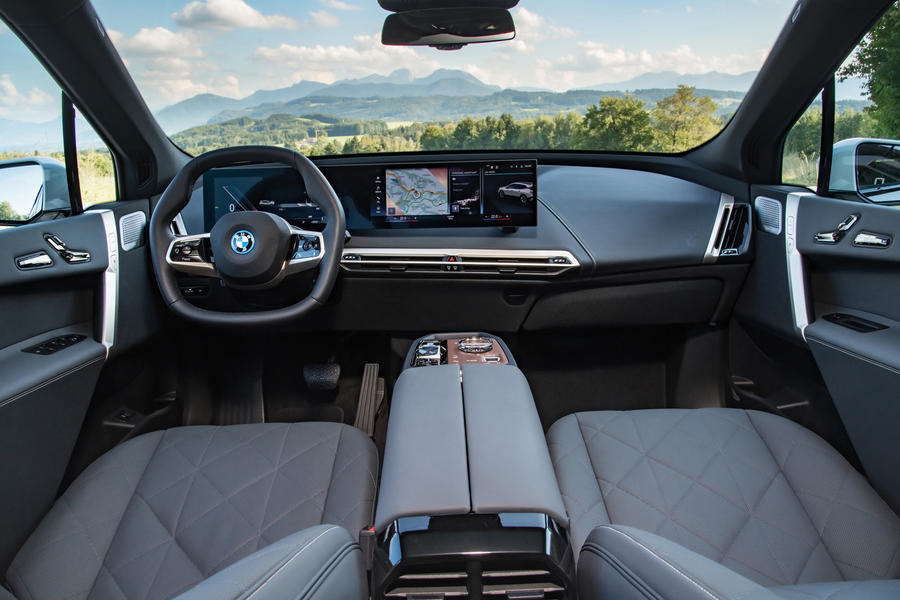 The iX is a creditable addition to the premium large SUV ranks. In xDrive50 guise, it’s very capable, with luxurious and terrifically refined qualities. It may lack the ultimate driver engagement and overall dynamic prowess of the best BMW models, but it’s highly responsive and as fast as any X5 in real-world driving conditions.

There are arguably roomier and more versatile electric SUVs on sale, and the iX’s £91,905 starting price is significantly higher than that of the E-tron, I-Pace and EQC, but none strikes quite the same balance between usability and driving fun. 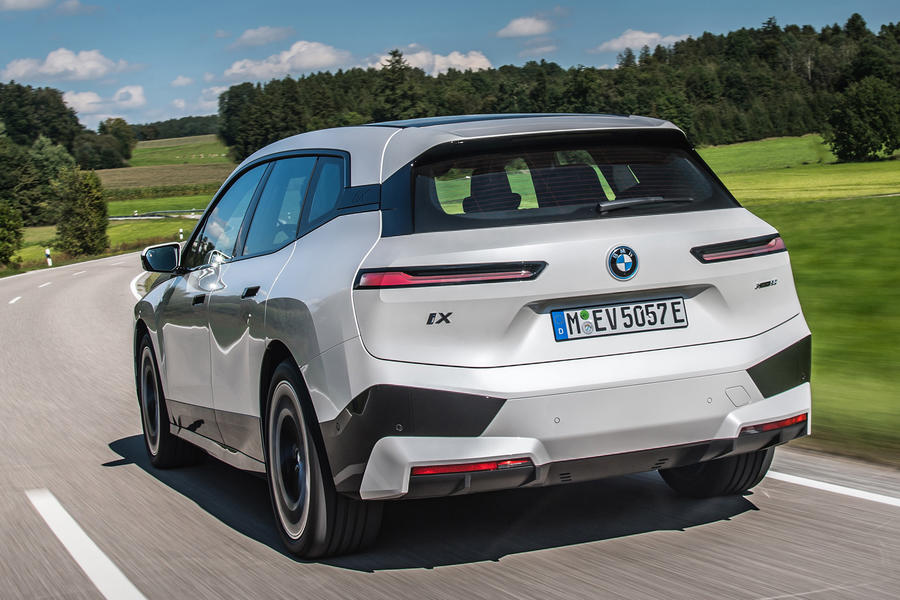