The BMW i8 Roadster is the i8 that we all know and admire, only sans roof.

Given that the removal of the hybrid sports coupé’s lid only improves its futuristic, out-of-this-world profile, you could argue that it’s the car the i8 should have been when it originally came on stream back in 2014.

That it’s taken this long for BMW to begin rolling Roadsters off the production lines seems a tad odd, particularly when you consider the fact that it expects the £124,735 model to outsell its hardtop stablemate at a rate of three to one, despite the fact it commands a £12,000 premium.

Yet when you take a look at the spec sheets for both cars, you can see why buyers might not be too phased by this price hike. Because of the i8’s unique architecture, which combines an aluminium chassis with a high-strength, carbonfibre-reinforced polymer passenger (CFRP) cell, the need for additional structural reinforcement to make up for the removal of the roof is significantly reduced.

There are some additional panels in the rear suspension and the windscreen frame is also fashioned out of CFRP, but that’s about it. All up, it makes the Roadster just 60kg heavier than the Coupé - no mean feat when you look at the lard a conventional car is required to pack on in the pursuit of structural strengthening when its roof is chopped off.

This marginal weight gain pays dividends when it comes to performance, too. As with the Coupé, the Roadster’s power is sent to its rear wheels by a turbocharged 1.5-litre three-cylinder petrol engine (related to that you’ll find in the £16,000 Mini One), while an electric motor does the same for the fronts. From a standstill, the Roadster will hit 62mph in 4.6sec - just 0.2sec slower than the Coupé.

And while the petrol engine is no more powerful than it was back in 2014, at 228bhp and 236lb ft, updated battery technology means the motor now produces an additional 12bhp. 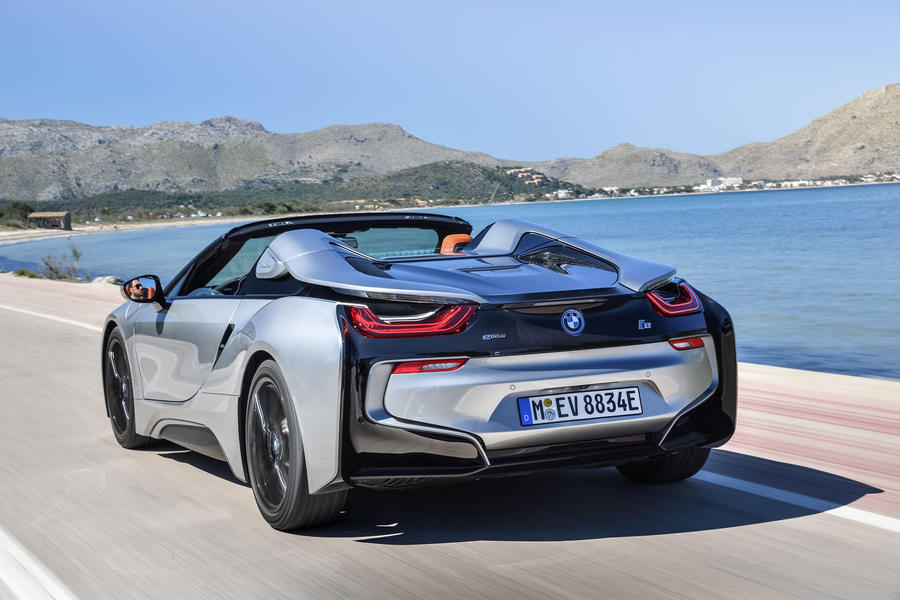 Aside from the infinite head room and additional wind buffeting that’s common to any open-top sports car, you’d really have a hard time differentiating the Roadster from the Coupé. This is both good and bad, because for every pro that’s carried over, so too are a couple of cons.

Let’s deal with those negatives first. The ride, for instance, suffers from the same choppiness that mars the hardtop’s manners at low speed – behaviour that’s only really ironed out when travelling at pace on a smooth motorway.

Then there are the brakes, or more specifically the brake pedal. Its positioning is fine - in fact, all of the Roadster’s controls are located in the sort of easy-to-access places you’d expect them to be in a driver-focused sports car - but its action is vague and numb and never really leaves you with a clear idea of how much travel you should be using to slow the car down. That's not ideal when you’re fast approaching a sharp hairpin high up a Spanish mountainside.

And when, having slowed the car down, you get to that hairpin and turn in to clip the apex, you’ll expose what is perhaps the i8's most frustrating shortcoming: understeer. It’s by no means the “oh my God, I’m going to spear straight into the Armco barrier” sort of understeer - far from it. Backing off or pinning the throttle to pivot the rear around will indeed remedy things nicely. It’s just that the struggle the 215/45-section front tyres often have to endure to find purchase is enough to make you question just how at ease the Roadster really is with being a sports car.

Adapt your driving style with this in mind, though, and you’ll find there’s still plenty of fun to be had. Lower your entry speed, trail brake into a corner to force the front end to turn and then pin the throttle on exit, relying on the electric motor’s instant torque to help plug the gap left by the engine, and the i8 will prove it’s still a properly quick point-to-point machine.

It’s under these sorts of conditions that you’ll begin to notice the i8’s strengths: through fast, flowing corners, its body remains impressively flat and composed; the weighty steering rack is quick enough to lend the i8 a front end that feels responsive without being twitchy or nervous; and the two power sources combine not only to provide impressive responsiveness under throttle, but also a fairly serious turn of pace.

The Roadster is good at covering long motorway journeys in a quick and comfortable fashion, too. Even with the roof folded down - a task that takes 15 seconds and can be carried out while you're moving at speeds of up to 31 mph - wind buffeting is present but far from irritating.

Then there’s the interior, which is pleasing to the eye and to the touch - particularly with our test car’s optional Accaro interior trim - while the digital dials are clear and reasonably easy to read. The 8.8in-screen Professional Navigation infotainment system is a doddle to use and responsive in a manner that many rival systems just aren’t. 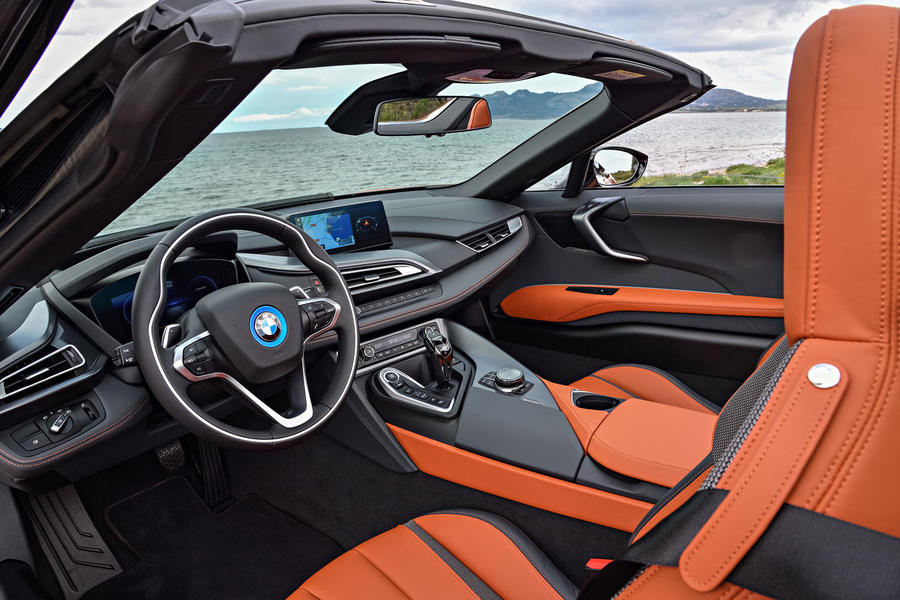 The Roadster isn’t so much an out-and-out sports car, but more of a fast, dashingly styled grand tourer. A Porsche 911 will handle corners and engage you on a twisty section of road in a way the i8 just can’t, but at the same time the Porsche can’t propel itself on electricity alone for 33 miles or turn heads quite in the same way the i8 Roadster can.

Then again, the Porsche doesn’t cost £124,735; even a Carrera 4 GTS Cabriolet would leave you with a good £15,000 to splash on options before you came close to matching the i8 Roadster’s asking price.

The 911 won’t be affected by severe depreciation, either. After 36,000 miles and three years of ownership, the i8 Roadster is expected to retain just 39% of its value, while the Porsche is forecast to hold 54%. 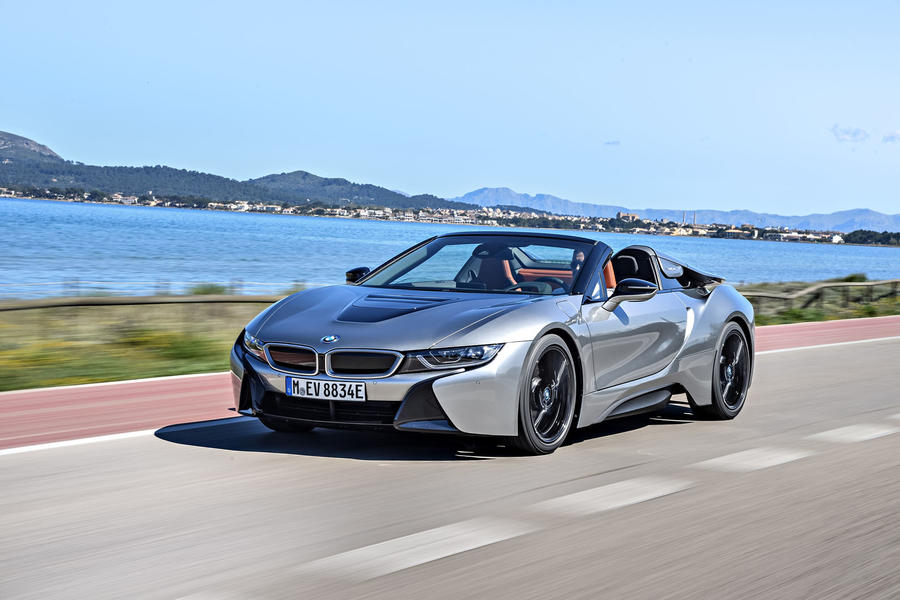 Not a single picture with the roof up?

Not a single photo with the roof up?

You mean, apart from the second to last photo, where the car has the roof up?

Site Admins! Come on, remove this crap from mattbrown.On the i8, it's more about the looks than anything else, handling dynamics etc. Totally agree with giulivo, would like to see the roof up. Visited my BMW dealer recently for work on my own car and saw the Roadster up close, looks amazing, but when I asked to see it with the roof up, I was told they were too busy.

This car is stunning and the regular i8 always drags my attention. BMW hit the nail on the head with this design.

Just need an inline 6 version (or an all electric) with grippier front tyres now...