From £130,4108
The M760Li isn't just the fastest 7 Series, it's the fastest production BMW. We find out it's also a pretty convincing package for those who can
Open gallery
Close

The new BMW M760Li xDrive, the latest in an ever-expanding range of so-called M Performance models developed and engineered by BMW’s M division, that is set to go on sale in the UK later this year, defies classification.

Here is a car that stretches to a limousine-like 5238mm in length. With just about every single feature BMW can muster thrown in for good measure, including standard four-wheel drive and an active rear-wheel steer function, it also tips the scales at a decidedly heavyweight 2180kg. Yet, the leather-lined luxury saloon will storm to 62mph in just 3.7sec, making it not only the fastest accelerating 7 Series model ever produced but, significantly, the fastest-accelerating series production BMW model full stop.

That’s 0.2sec faster than the German car maker quotes for the recently discontinued M5 Competition. It’s also 0.5sec inside the time claimed for its key rival, the more powerful Mercedes-AMG S65. Specify the optional driver’s package, which brings an upgraded ECU governing its top speed, and it adds 34mph to its nominal 155mph top speed to dispatch you to a supercar challenging top speed of 189mph.

The basis for the M760Li’s extreme performance is a heavily reworked version of BMW’s twin-turbocharged 6.6-litre V12 direct injection petrol engine – the N74 as it is known internally. With modified turbochargers and a new fuel injection system that operates at up to 200bar of pressure among a myriad of other changes, it delivers 601bhp at 5500rpm together with a stout 590lb ft from just 1550rpm.

In the four decades BMW has been producing V12 petrol engines for its series production models, none has been as powerful, nor, I suggest, quite as charismatic.

Drive is channelled through a specially calibrated version of BMW’s widely used eight-speed automatic gearbox, featuring unique software developed by BMW M for altered shift points and more rapid shift times in Sport mode. The torque converter-equipped unit is allied to BMW’s xDrive four-wheel drive system, which also receives its own software to give the M760Li a more rearward-biased torque split in any given driving condition than other four-wheel-drive 7 Series models. Altogether, there are six driving modes: Adaptive, Eco Pro, Comfort Plus, Comfort, Sport and Sport Plus.

Setting the M760Li apart visually from other sixth-generation 7 Series models is a standard M aerodynamic styling package with re-profiled bumpers, a matt grey finish for the grille and other exterior elements, bespoke 20-inch wheels and a distinctive V12 badge set within each of the C-pillars. Further distinguishing features include M Sport brakes with blue callipers, and an M Sport exhaust with four trapezoidal shaped chromed tail pipes. Buyers can also specify a subtle boot deck spoiler, as worn by our test car, as part of a range of optional extras. 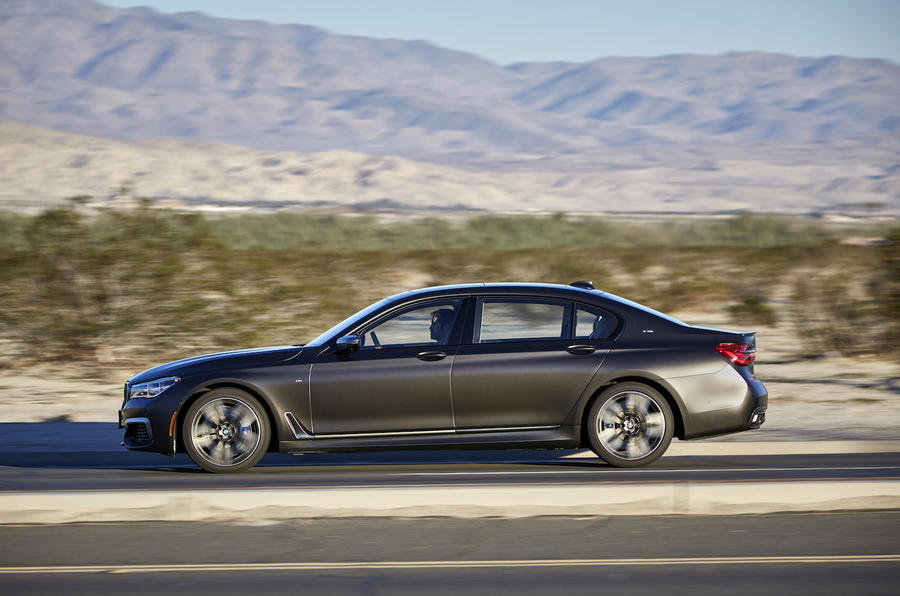 The M760Li boasts a duality of character that makes it every bit as convincing cruising along wide open boulevards as a limousine as when it is charging hard along challenging back roads. First impressions are of an outstandingly refined and endlessly powerful car, boasting exceptional agility for its size and high levels of comfort.

On top of this, it offers a suitably high-quality interior with impressive accommodation and all the various features you’d expect in a car at this end of the market, including some of the most supportive yet cosseting front seats I’ve ever come across.

At low revs, in comfort mode around town, its engine remains commendably hushed and the automatic gearbox operates with near imperceptibly, making it terrifically soothing and appealing both to drive and, perhaps best of all in such conditions, be driven in. However, switch into Sport and the big BMW’s character changes quite dramatically. With more aggressive software mapping and a more free flowing exhaust, the V12 becomes far more vocal and responsive. There’s an inherent silkiness and defining linearity to the delivery all the way to the 6800rpm cutout. Moreover, there’s immense urgency and vast potency when you go searching for it, too.

As its official performance figures suggest, the M760Li is staggeringly quick in a straight line. But this comes as no great surprise. With such a vast amount of torque concentrated low down in the rev range and BMW’s xDrive four-wheel drive system ready to dole it all out with the help of a specially developed M Performance software program providing a distinctly rearward bias, the leather-lined luxury saloon fires out of the blocks with great accelerative intensity and a truly alluring but never overwhelming exhaust note.

Even with the traction control left on, there’s still a brief moment of squirming before the tyres gain traction and the heady reserves produced by its engine are placed to the road. When they are, the big BMW delivers crushing acceleration on a wide open throttle, reeling in the horizon with tremendous authority when the conditions permit. It’s the sort of car that will double maximum speed limits without ever feeling remotely taxed. While the V8 powered 750i may provide the feeling it is consummate cross-continent cruiser, but the V12 touting M760Li operates on an altogether higher and more convincing performance plane. 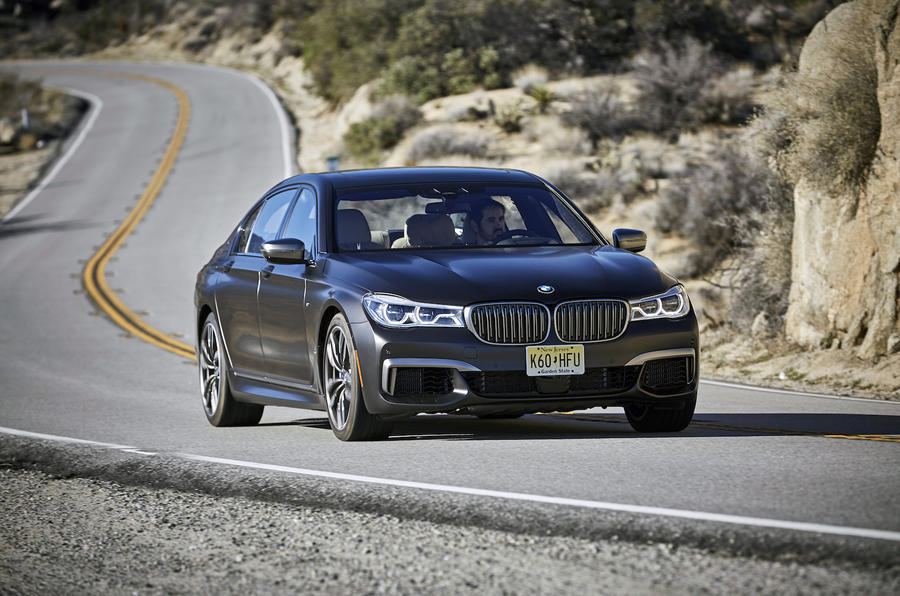 Where it is at its best, though, is from a rolling start. Plant the throttle at moderate speeds and the smooth shifting eight-speed automatic gearbox, imbued with its own M Performance software mapping to speed shifts, will shed up to four ratios before you’re fired forward with tremendous force. The longitudinal stability, aided by an active rear wheel steer system, is exceptionally good, helping to give the M760Li a wonderful rock solid feel at high speeds. Out on the motorway, you can tick off great distances at tremendous speed and security and with marvellous refinement and comfort.

The official combined cycle figure of 22.4mpg gives the new BMW an average CO2 rating of 294g/km. In the real world, you struggle to get near this, even when tootling around town. Not that anyone in the market for such a car is likely to care, though. As a means of comparison, the 621bhp twin-turbocharged 6.0-litre V12 powered Mercedes-AMG S65 delivers an official 23.7mpg and 279g/km.

The real achievement is the outright level of agility and sheer dynamic prowess BMW’s M division has managed to bestow upon its latest M Performance model. The M760Li is an incredibly capable car, with a broad set of dynamic abilities. Its rapid nature may grab the headlines, but it is the way it goes about its business that really defines it. Just don’t expect it to serve up sport car levels of handling prowess. After all, it stretches to well over 5000mm and weighs well beyond two tonnes, and no amount of contemporary chassis systems and specific suspension tuning are going to make up for this.

Given its dimensions, though, it is surprisingly fleet-footed through corners. Indeed, the big luxury saloon is capable of changing direction with all the adroitness of a much smaller executive class car. The steering, with an active rear steer function both to improve low-speed manoeuvrability as well as to heighten the handling out on the open road, is predictably light in feel and wonderfully direct but predictably it lacks for any meaningful feedback or worthy communication.

Entering corners at speed reveals exceptional grip from the standard 245/40 R20 and 275/35 R20 tyres, and with the air suspension switched to sport mode, the body control is rather special, with great resistance to pitch and dive under braking along with progressive movement and lack of the usual luxury car tendency to lurch as lateral forces increase.

The M760Li also does a very good job of isolating its occupants when running in comfort mode. The overall ride, while not quite as cosseting nor as smooth for big bump absorption as you’ll find in the Mercedes-AMG S65, is highly commendable given the new BMW’s sporting brief. Part of this can be traced back to the body structure, which uses an intriguing mixture of materials, including carbon fibre, and is claimed to be among the stiffest in its class. 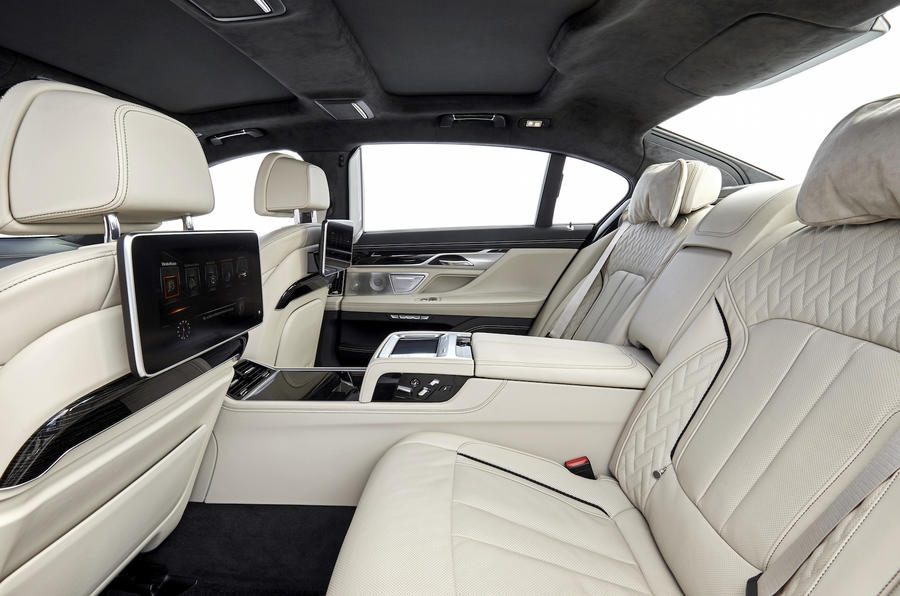 The M760Li is a remarkable feat of engineering – a car with which BMW’s M division can rightly feel proud. It’s no M7, though. Its primary achievement is in successfully combining two intrinsically different and apparently opposing characters, namely those of a graceful upper luxury limousine and inherently sporting saloon, into one highly cohesive and broadly talented offering. Despite providing outstanding levels of composure, comfort and refinement, the big BMW is also terrifically engaging to drive on all levels, thanks to its abundant power, outrageous pace and engaging agility.

Whether you’d choose the M760Li above the S65 really is a matter of individual taste and priorities. Buyers at this end of the market are well renowned for ignoring outright ability in favour of the message their car conveys. In that sense, the new BMW is likely to be bought by more technical orientated car buyers than luxury car purists, who have traditionally chosen the Mercedes-AMG flagship. If you have the financial means, its staggering pace, four-wheel drive traction and active rear steer makes for a compelling option in what is, and likely to remain, a rarefied market.

Alpina B7 any day.

It doesn't really stand out from it's lesser siblings in the way the S-65 distinguishes itself from an S-500. I'd have the Alpina B7 Bi-turbo any day: Much better aesthetic kit, Quicker acceleration and top speed, lighter and no doubt more cossetting (which is the point of a big limo).
abkq 6 February 2017

100k + for this 7-series is only 1/2 the price of a RR Ghost.
You get similar performance, similar space, almost comparable luxury, but (for me at least) only a fraction of desirability.
Overdrive 6 February 2017

100k + for this 7-series is only 1/2 the price of a RR Ghost.
You get similar performance, similar space, almost comparable luxury, but (for me at least) only a fraction of desirability.

I get what you're saying in terms of desirability, but 760's performance and dynamics are in a different league. Also, as you said yourself, being half the price of the Ghost they don't are not really competing for the same clientele.

Over £100k for a BMW! They're having a laugh, especially for a car that looks nothing more than a big 3 Series and is neither special to look at inside or out, or to sit in where you feel you could be in any BMW saloon, past or present. Just compared the looks and feel of this to a Flying Spur or Rolls Royce Ghost and it's clear BMW's pricing is a joke. Give it 12 months and this car will half lost around 50% of its price.
View all comments (7)