From £27,2658
Share review
As talented as it’s always been, the TT covers every base as well as you would expect – even if it could be a little more exciting
Share
Open gallery
Close
by Matt Bird
18 July 2018
Follow @PHMattB

This being an Audi anniversary, though, the celebrations are predictably muted. 'Extravagance is excessive' would appear to be the Audi mantra. So alongside a 999-run '20 Years’ special, the current third-gen TT has been updated four years into its production run with a very modest mechanical and cosmetic refresh.

The important news for enthusiasts are the changes for the TTS. Power has been reduced to 302bhp because of a standard petrol particulate filter, but torque is up 15lb ft to 295lb ft. Ally that to a now-standard seven-speed dual-clutch gearbox (the six-speed manual is no more) and the result is a fiercely accelerative 2.0-litre TTS; 0-62mph in 4.5sec is quicker than the original R8 V8. It’s worth noting that magnetorheological dampers are now also standard for the TTS, helping to explain why the four-cylinder flagship’s price is expected to rise to £45,000. 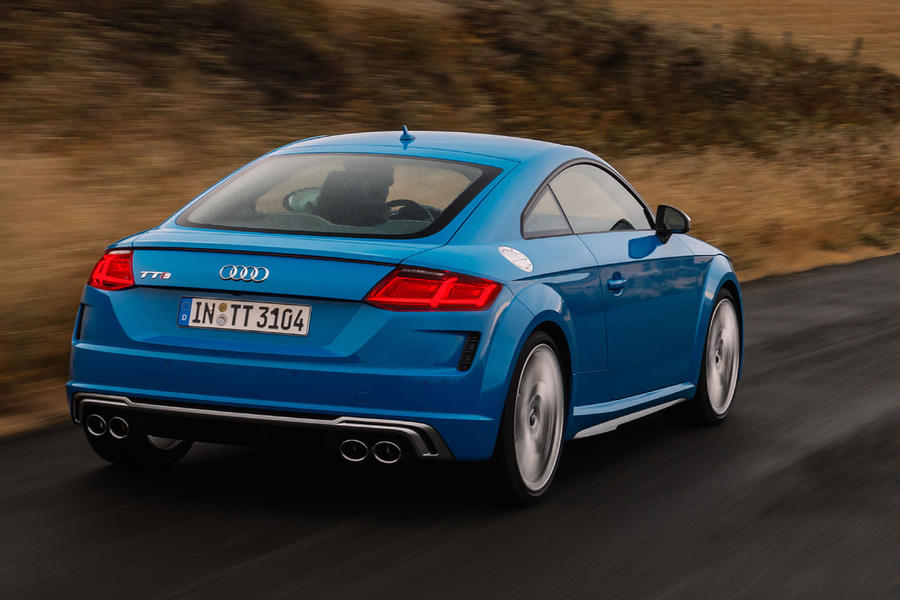 Pretty good, in that fuss-free, fault-free, drama-free fast Audi way. Test location for the TTS drive was the Isle of Man, including a memorable drive on the Mountain section closed to other traffic; this played to the car's strengths extremely well.

For travelling very fast on an unknown, very challenging bit of road without intimidating the driver, it’s hard to think of anything much better than a 300hp TT. Corners with 40mph speed suggestions are tackled comfortably at twice that, second gear hairpins are dispatched without any hint of traction loss and fifth-gear direction changes are shrugged off easily.

The engine is powerful, the brakes’ performance can’t be criticised (even if the feel can) and it seems that the Isle of Man would run out of kippers before the TTS runs out of grip. Its plug-and-play performance is only surpassed by the wildly brisk TT RS.

The TTS’s issues are not in the outright performance metrics, then, but rather in the subtleties of nuance and feel. Yes, familiar Audi complaints, but ones that remain valid when there are rivals such as the fantastically tactile Porsche Cayman and caddishly indulgent Jaguar F-Type to consider. There’s simply little joy for the keen driver in going fast in a TT, from the snatchy brake pedal to the aloof steering. You can push harder, and go much faster, but the joy typically associated with doing that in a sports car is noticeable by its absence.

Equipped with optional 20in wheels, the TTS rides very firmly regardless of the drive select mode (Efficiency, Comfort, Auto, Dynamic, Individual) chosen. Trying the 19s would be advisable; while not crashy as such on the larger wheels, there’s no escaping how fidgety the car always feels, and this is rather at odds with the car's generally very refined nature.

On the plus side, the seven-speed DSG feels like a marked improvement from the old six-speed gearbox, with greater alertness in both automatic and manual modes. Some may mourn the demise of the ‘true’ manual option, although there’s little cause for concern in this dual-clutch 'box.

In short, the facelifted TT feels very similar to drive to the ‘old’ TT. Given little significant has been altered, that shouldn’t be much of a discovery. That there are hatchbacks more rewarding to drive on this architecture than the sports coupé of the VW empire still feels bizarre, however. 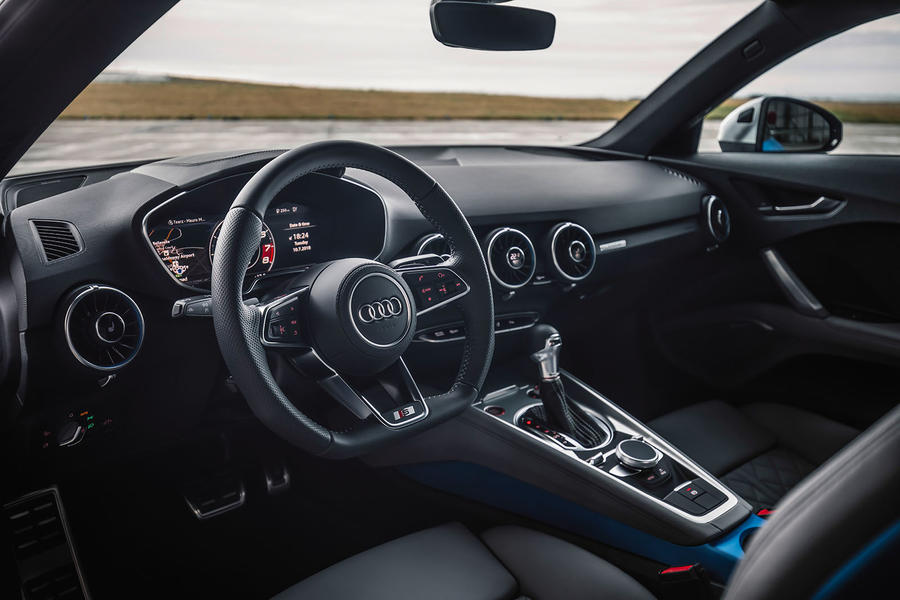 Yes, and no doubt many people will. Audi has not shifted more than 600,000 TTs globally in the past two decades by making a car that doesn’t appeal to its audience; with this car continuing in much the same vain as before, expect that to continue.

The new colours and wheels make the TT slightly more interesting to look at, the additional equipment will increase showroom appeal and no doubt that blistering acceleration will find some fans. If the formula ain’t broke — and everything about the TT’s success would suggest that it most certainly is not — then why on Earth bother fixing it?

While that’s a perfectly rational approach, and one that will surely continue to bear fruit, the TT still isn’t a car for those who really enjoy the process of driving. And that seems a bit of a shame. If you like the TT, this car will appeal. But there’s nothing here that will convince the detractors — alternatives from Porsche or BMW still offer more fun. 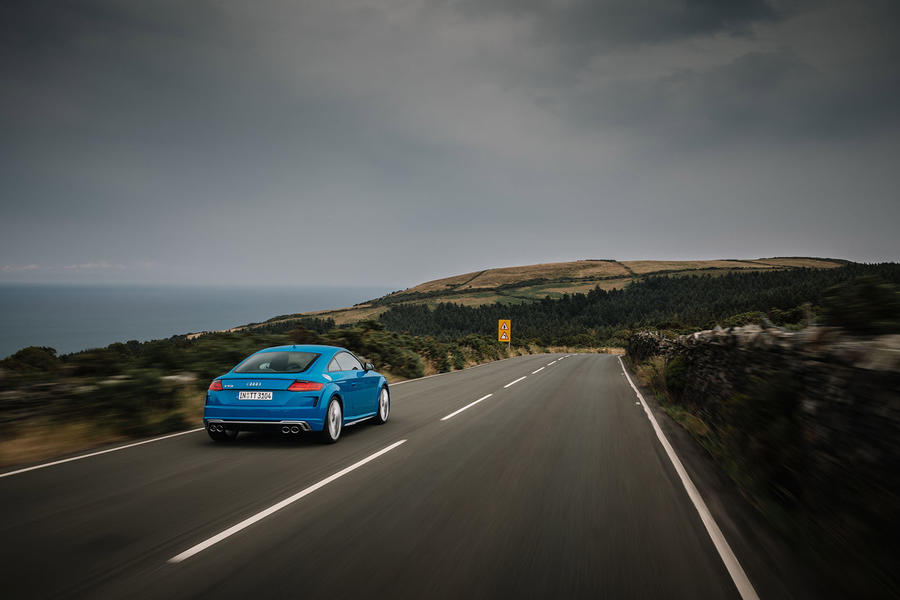 Fast but not fun then

So why does a £45,000 car that's not rewarding to drive, lacks excitement and which has a fidgety ride and inert steering merit a 4-star rating?

Ah yes, it's because it is an Audi!

So why does a £45,000 car that's not rewarding to drive, lacks excitement and which has a fidgety ride and inert steering merit a 4-star rating?

Ah yes, it's because it is an Audi!

If it had a Jaguar badge on it would have got 5-star and bravo / well done again Jaguar comments from the fanboys. But we all know they make second rate cars - I happened to notice an F-pace with rust just this morning.

Bizarre. Just buy a Golf R - save £10k and get a more rewarding and more practical car.

Faster than an RS3..just askin

always said a golf is just a golf...

Or buy a Morgan Three Wheeler and at least live a little.  Audi, amazing technology, well screwed together interiors, seemingly a bit staid to drive, but look at those four beautiful rings of success...spending an excessive amount on a dressed up Golf, having a slightly too high up essentially Golf like seating position in a sports like looking car..that’ll be the Audi.  Arrrgghhh is this badge engineering?  Are we all a bit taken in?  Everyone will think SUVs are amazing next!

I see this facelift has

I see this facelift has inherited the tacky style rear bumper that is similar to what they have done with the facelift A3 as well... looks like a boy racer aftermarket add on.

How on earth does a small two

How on earth does a small two seater weigh 1650kg? Seems 300kg too heavy to me; fix that and you sort the excitement out!

How on earth does a small two seater weigh 1650kg? Seems 300kg too heavy to me; fix that and you sort the excitement out!