Despite the Audi RS7’s massively swollen arches and sharp, sinewy flanks, it isn’t a four-door, all-paw performance saloon that drives in the hardcore manner that its hardcore looks suggest it might.

That seems like a slightly contradictory statement about a machine with a twin-turbocharged 4.0-litre V8 at its disposal - particularly one that makes 591bhp and 590lb ft – and can hit 62mph from a standstill in 3.6sec. But the fact of the matter is that even on Britain’s scab-riddled roads, it manages to keep its effortless, autobahn-devouring grand tourer image firmly intact. Unlike so many of its hard-edged super-saloon contemporaries, the RS7 prioritises massively usable, devoutly sure-footed performance and everyday appeal over and above any ability to provide immersive, tactile point-to-point thrills.

This has long been an Audi Sport theme, and given that the UK’s roads aren’t getting any wider or any emptier, you can see how the logic of such an approach will be appreciated in certain circles. And with this new RS7, Ingolstadt has done plenty to give it an edge when it comes to real-world drivability.

So you get a 48V mild-hybrid system for the first time that - in conjunction with the V8’s ability to shut down half of its cylinders at cruising speeds - provides fractional improvements in fuel consumption and a reduction in emissions. The introduction of rear-wheel steering, meanwhile, helps to virtually shorten the RS7’s wheelbase and make it easier to thread its 5.0m-long aluminium and steel body through tight inner-city car parks. 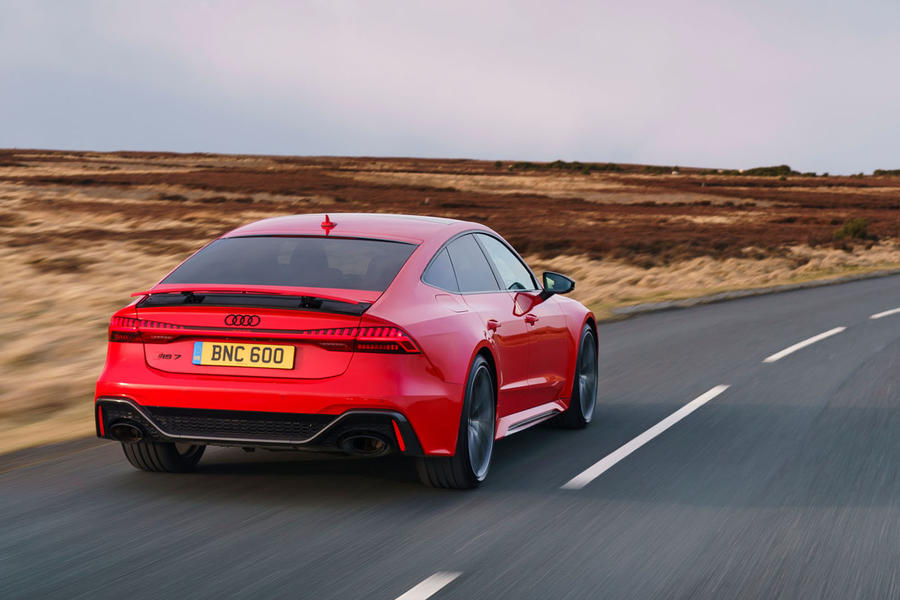 Like its predecessor, the RS7 is available with two suspension options - both of which are based around a front and rear multi-link architecture. Height-adjustable air springs come as standard and our test car had the optional RS steel coils and adaptive dampers.

Combined with those enormous, optional 22in alloy wheels and eye-liner levels of side profile from the 285/30-section Pirelli P Zeros, you’d be excused for having reservations about the car's potential lack of on-road manners. But the reality is the complete opposite: aside from a real-world economy figure that will likely dwell somewhere in the low to mid-20s, as a daily driver, the RS7 would be just about as easy to live with as any posh diesel executive saloon you’d car to name.

Okay, so there is a tauter edge to its ride and its flying-saucer rims do serve to amplify intrusions from any imperfections that they happen to roll over, but it’d be a stretch to call the RS7 uncomfortable. Set its adaptive dampers to Comfort and it bats off motorway miles as if they were nothing. Leave them in their default setting and more technical A- and B-roads are dispatched in quick, controlled fashion and with minimal jostling.

Admittedly, winding the dampers up to their firmest Dynamic setting does cause the RS7’s ride to become quite animated and tetchy, with an almost iron-clad level of vertical body control that would likely dissuade frequent use. That said, customisable RS1 and RS2 drive modes mean you can easily make the dampers, engine, steering, differential and stability systems as angry or soft as you choose – so chances are you won’t find yourself using Dynamic mode too often anyway. Even so, the RS7 never really feels like a car that encourages a full attack mode style of driving anyway, regardless of how you’ve opted to set it up in the first place.

There are a few reasons for this and surprisingly it starts with the engine. It’s undoubtedly potent and partners with its eight-speed automatic transmission and quattro all-wheel drive system to deliver consistently unflappable and explosive straight-line acceleration in all conditions. But despite having the immense performance, sharp throttle response and slick cog-swapping dexterity that would otherwise mark out a pretty exceptional performance powertrain, the RS7 doesn’t seem too fussed about flaunting its wares. Even with our car’s RS sports exhaust (a £1450 option) in its shoutiest setting, the deep, mellifluous V8 bellow remains distant. Subtly menacing, sure, but muffled all the same.

The steering works to similar effect. Be in no doubt that it’s integrated smartly with the RS7’s rear-wheel steering and works to make the nearly 2.1-tonne, 5.0m-long RS7 handle in a manner that's wieldy and sure-footed. But at the same time, it doesn’t pack the sort of immediate off-centre responses you might expect from a car that moves in the same circles as the likes of BMW’s M5 Competition or Mercedes-AMG’s E63 S. A gearing that feels comparatively relaxed means you find yourself turning its Alcantara-wrapped wheel a just a bit harder and a bit further to get its nose to shark in to a corner with the desired level of immediacy, and in typical Audi fashion, you’re rewarded with very little in the way of textural feedback.

Still, there’s masses of traction on offer here and the RS7 displays a healthy resistance to understeer, given its sheer size and mass. A by-product of its undescriptive steering is a seemingly heightened ability to filter out corrupting impacts mid-corner, too. But for all the confidence this imparts, you’re constantly aware of the Audi’s girth. It’s big, this RS7, and it fills its lane like a rugby prop squeezed into a fairground bumper car. The consequence is that you find yourself cautiously peeking its nose around poorly sighted bends, even when you know you’ve got a bit of extra room in your lane to spare. 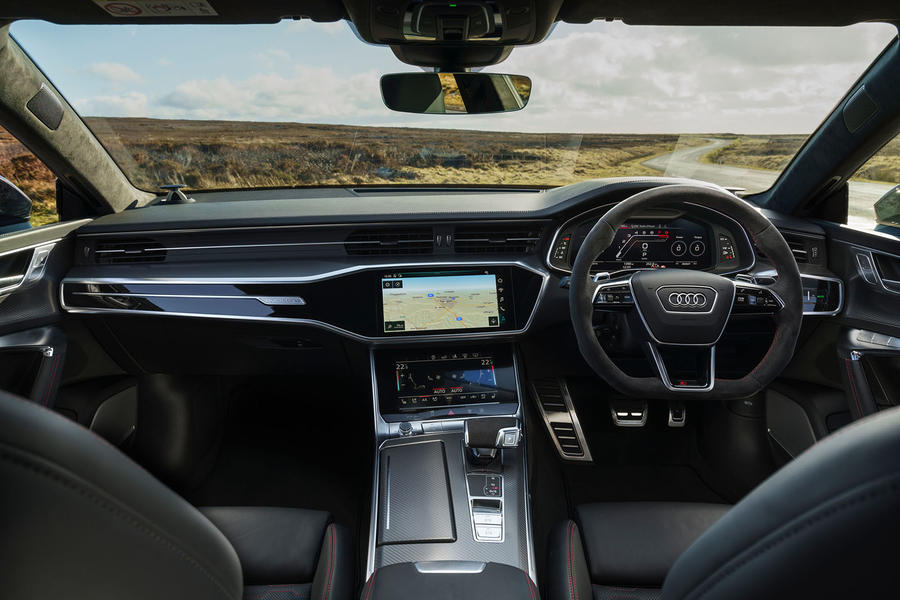 As tempting as it might be to label the RS7 a devastatingly quick cross-country machine, doing so would be a touch disingenuous. Truth is it just feels slightly too wide to really be at home on the tighter lanes and B-roads that so often provide the most thrilling drives. However, show it a wide, open, well-sighted and flowing A-road or stick it on a motorway and you’ll find that label sticks far more convincingly.In such environments, the RS7 makes for a pretty compelling grand tourer. It might not major in tactile engagement or aural drama, but its raw pace and sure-footed, surprisingly comfortable ride appeal in their own right. Its cabin is a fairly luxurious place to spend time, too, with decent rear passenger space and a 535-litre boot to call upon.

Prices for the RS7 start just south of the £100,000, which is on a par with the recently updated versions of the BMW M5 Competition and Mercedes-AMG E63 S. Purists will likely find the incoming contenders from Munich and Affalterbach more fitting to their tastes but, even so, the all-round appeal of the RS7 remains impossible to ignore. 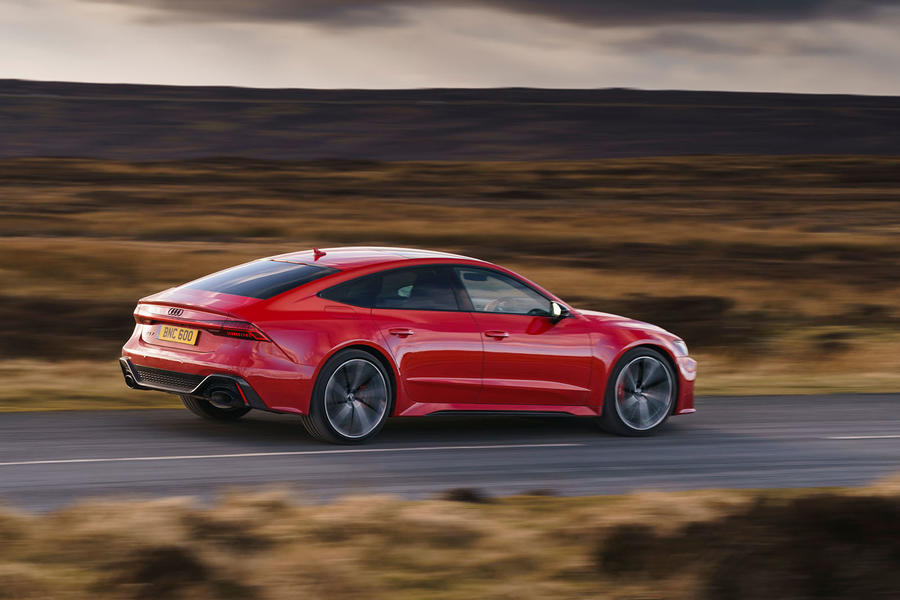 A  huge heavy car that is pointless fast. Such a waste. So selfish. There is more driving fun in finding the limits of a slower car.