8
Latest RS6 is the most sophisticated yet and claimed to be the most involving. We find out if it is on UK roads
Open gallery
Close

This is the latest version of the Audi Sport flagship, a car that over the years has become the default daily driver for the extremely well-heeled in a hurry.

These owners tend to have barns filled to the rafters with exotics, but they tend to choose the Audi RS6 Avant for everyday duties, with the fast four-wheel-drive estate delivering just the right balance of down-the-road dynamism and discretion. We’ve already driven it in the US (where it's available for the first time after nearly 20 years), but now it’s time to find out how it fares in the UK.

While previous generations were as much about subtlety as speed, this latest one struggles to blend in. At the front is a vast, gaping grille that's flanked either side by large vents clearly influenced by basking sharks at feeding time, while the trademark wheel arch blisters increase width by 80mm over the standard A6 Avant (only the front doors, roof and tailgate are carried over). There are also LED headlights that do a natty ‘look at me’ strobe when you unlock the car, plus a pair of huge oval tailpipes.

Our test car’s arresting visuals were further enhanced by its Nardo Grey paint and gargantuan 22in alloys, which amazingly seem only just big enough to cover the optional carbon-ceramic brake discs (one of many extras that took our car’s total price to almost £135,000 – yikes!).

Still, an increase in stopping power is fairly welcome when you consider the RS6 packs a 591bhp version of the now-familiar twin-turbocharged 4.0-litre V8. This churns out 590lb ft, which is enough to pull up several stumps, and is mated to a Tiptronic eight-speed automatic gearbox. All four wheels are driven through a Torsen four-wheel drive system that can shuffle up to 85% of the engine’s effort to the rear axle, where it's distributed through a torque-vectoring Sport differential.

Standard on all UK cars is Dynamic All-Wheel Steering, wherein the rear wheels turn the opposite way to the front wheels at low speed and the same way as you start to travel more quickly. Also fitted is air suspension that's 20mm lower than that of the standard A6 and can lowered by a further 10mm above 74mph. However, our car was fitted with RS Sports Suspension Plus, which ditches the air springs in favour of traditional coil items and adds interconnected adaptive dampers, known as Dynamic Ride Control. Our car also had winter tyres, so any true handling impressions need to be caveated against this.

Of course, you can’t just launch a near-two-tonne, 600bhp estate car on the world these days without considering its environmental impact. As a result, the RS6 has all the latest measures to boost efficiency, including cylinder-on-demand and a 48V starter-generator that allows engine-off coasting for up to 40sec, plus the ability to shut down the engine below 13mph as you’re slowing for traffic lights.

The rest of the RS6 will be fairly familiar to A6 drivers. For instance, the interior is beautifully finished and packed with wall-to-wall touchscreen and TFT displays - the latter with a bespoke, race car-style bar graph rev counter when one of the RS modes is engaged. It’s spacious, too, although the 565-litre boot is shaded for capacity by that of the cavernous Mercedes-AMG E63 S Estate. 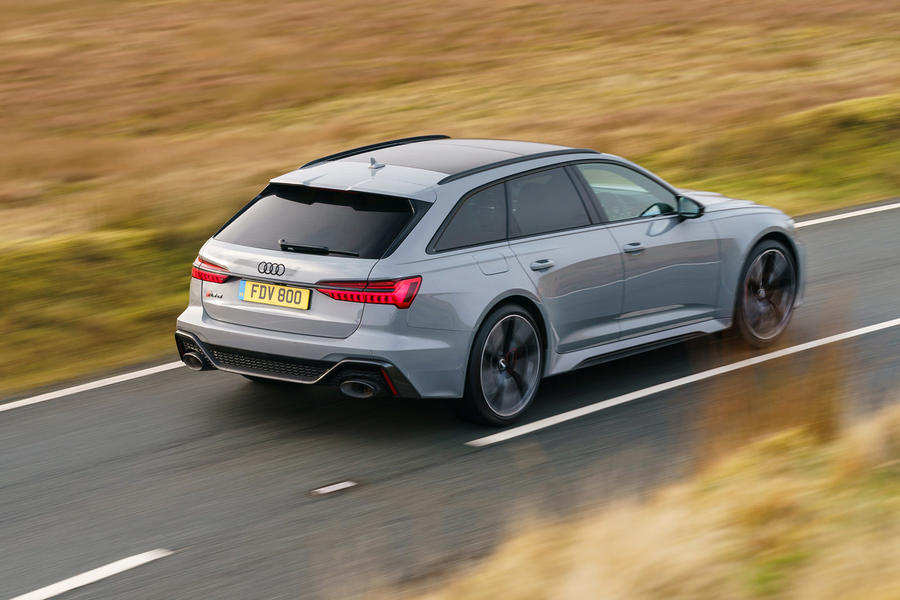 Like its predecessors, the RS6 likes to play the smoothie as much as the supercar slayer. Even on steel springs, the ride is far more compliant than that of the E63 or BMW M5, coping well with poor surfaces, although those vast wheels cause the odd wince when they crash into a pothole. The same is true of the engine, which is docile and muted at low to medium revs, with the gearbox shifting smoothly and early when you’re simply taking it easy.

Even when you push the throttle down fully, the RS6 doesn’t deliver the instant, savage acceleration you expect. That’s not to say it’s slow – far from it, as a 3.6sec 0-62mph time reveals. It’s just that its linear delivery (peak torque is available from just 2050rpm) and unbreakable traction saps some of the initial sensation of speed. As does the fact that, apart from a dramatic growl on start-up and some crackles on the overrun when you choose Dynamic mode, the V8’s woofle is rather muted. That said, there is a runaway freight train feel to the performance, with the RS6 seeming to accelerate exponentially faster the quicker you go - great for autobahns, less useful on the M6.

The addition of four-wheel steering has certainly made the RS6 feel nimbler than before, and at low speeds in particular you can feel the rear swinging into line behind the fronts. Parking is also easier, hypersensitive sensors aside, helping reaffirm this car's suitability as an easy everyday companion.

There’s not much feel through the Alcantara-trimmed wheel, but the steering is quick and, in Comfort mode at least, naturally weighted. Even on winter rubber there’s decent bite, with the nose accurately tracking your chosen line.

Depending on driving mode, you can either fire true down the next straight or exit with just a smidgen of oversteer as the outside rear wheel is subtly overdriven by the trick diff. There’s no need to do anything as flamboyant as add opposite lock; simply open the steering a little and let the transmission trickery do the rest.

Unlike the E63 and M5, which are essentially rear-wheel-drive until slip is detected, the RS6 always sends torque to its front axle (a 40/60 split is standard), so there’s never any question of a sudden sideways whoopsie as the electronics struggle to keep pace with any sudden changes in grip.

Overall body control is good, with the RS6 feeling nicely tied down and cornering fast and flat. Yet really commit to a fast corner and any bumps can set in motion some corkscrewing as the suspension fights to retain control of 2075kg. The car always feels secure, but this is a reminder that it's a big old bus. The point is further rammed home on the UK’s tighter and twister roads, where the RS6’s near-two-metre beam means there’s little room for manoeuvre when you're pushing on; only on wide sweeping roads does it feel anything less than very large. 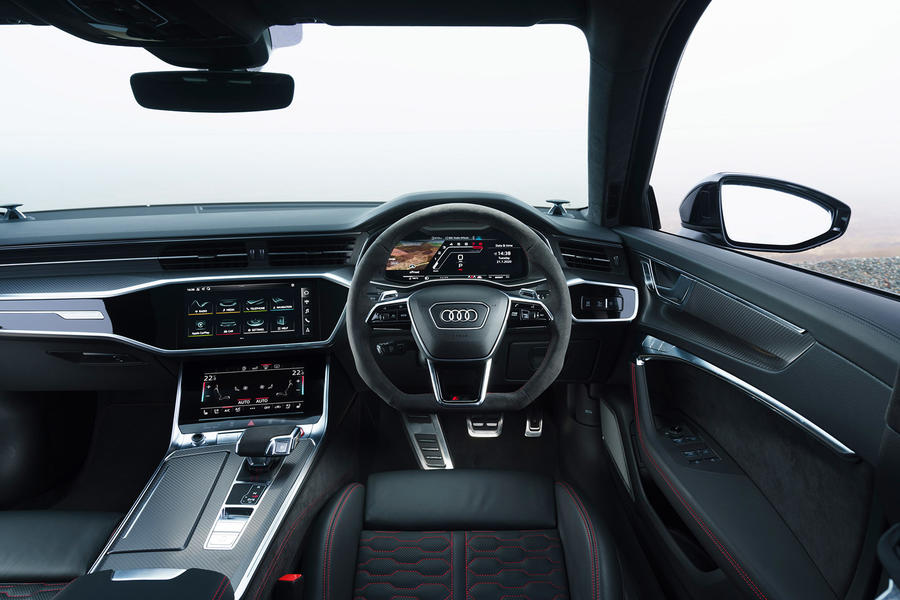 The RS6 is devastatingly fast from point-to-point but, even while it’s likely that summer rubber could bring extra sharpness to the handling, lacks the overall engagement of the E63 or M5. It’s an entertaining car but not an involving one.

However, the sort of people who buy these cars - and the RS6 in particular - usually have a stable of other machines that deliver visceral thrills when they’re needed. And the more you drive the RS6, the more you fall for its compelling blend of talents. As an everyday car with towering all-weather performance potential, it has the others beaten.

Factor in the refinement, comfort and space, plus an exquisitely finished interior that’s one of the best in the business, and the RS6 is still one of the ultimate all-rounders. 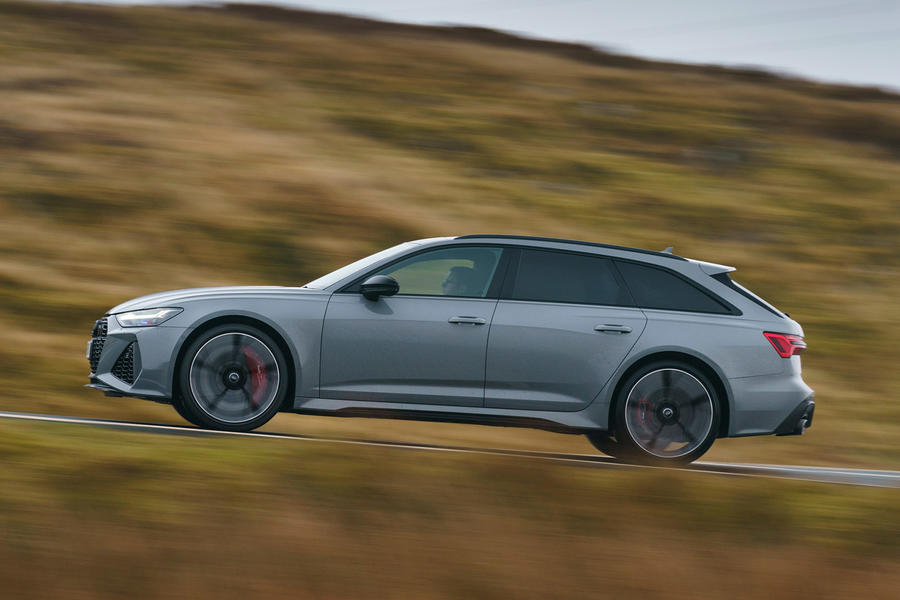 Sounds very fast and very boring. Crazy how heavy this thing is. Not really sure who this car is for but at that price, I would assume very few.
275not599 11 February 2020

Toyota, clean and simple?!  If there is one mainstream manufacturer whose stylists simply don't know when to stop and put down their pens it's Toyota.  No end of lumps, bumps and excrescenses.

Sad to see the 'concept car

Sad to see the 'concept car made production' of the 1990s A6 reduced to this visual mess.

Audi needs a new design director to bring back the clean simplicity it was known for.

Sad to see the 'concept car made production' of the 1990s A6 reduced to this visual mess.

Audi needs a new design director to bring back the clean simplicity it was known for.

Look at the standard A6. If that's not 'clean' you're blind. And the RS6 looks spot on - like a RS. And better than any M saloon.

clean, simple and boring is

clean, simple and boring is now in the ownership of the Japanese, Audi and all the Euro makers can build what they like as wild as they like, as thats why people buy them.... if you want bland, buy a Toyota or Hyundai.
View all comments (6)