The past decade or so has been a period of huge growth for Audi. Clearly central to this success has been Ingolstadt’s ability to turn out SUVs in all sizes and classes with a wide range of drivetrains and at a level of quality consummate with its premium brand positioning.

Among it all, one model in particular has stood out: the Q5. Introduced in 2008, Audi’s second dedicated SUV has regularly been among its three best-selling models. Even in the difficult sales conditions encountered last year, it still managed to pull in more than 130,000 sales worldwide.

Now, following the launch of the facelifted second-generation model, a rakishly styled variant of the mid-sized SUV has arrived in the form of the new Q5 Sportback. Produced at Audi’s newest manufacturing plant, in Mexico, it has been conceived to take on the likes of the BMW X4, Mercedes-Benz GLC Coupé and Range Rover Velar in a market niche that continues to grow in the UK as more and more buyers overlook traditional coupés in favour of style-led SUVs that offer more commanding seating and greater everyday practicality.

Audi is no stranger here, of course, with the Q3 Sportback, E-tron Sportback and Q8 all adhering to the same formula.  Taking the lead from these three existing SUVs, the Q5 Sportback borrows the front end styling of its long-established sibling and mates it with a new liftback style rear end that features a large, clamshell-style tailgate, giving it a distinctly more rakish appearance.

There are some unique design touches, mind you, including a new front grille with a honeycomb-style design and restyled tail-lights with differing OLED graphics depending on the equipment line buyers choose. However, there’s no denying the overall visual links between it and the conventional Q5.

The packaging of the liftback adds a scant 7mm to the overall length of the Q5, taking the Q5 Sportback up to 4690mm. Despite its more sporting lines, its width remains the same, at 1893mm, but its height is reduced by as much as 62mm, at 1600mm.

Predictably, the similarities extend to the interior: the Q5 Sportback contains the same dashboard, switchgear, trim elements and seats as the facelifted Q5. It’s a fine driving environment, with great clarity to the instruments, excellent ergonomics and the sort of quality materials befitting the new model’s premium positioning. It has lost out on space, though. The sloping nature of the roof reduces rear head room, while the angled tailgate robs 10 litres of boot space underneath the cargo cover, reducing it to 510 litres when the adjustable split-folding rear seatbacks are set in their regular position. When they’re folded down, there’s 1480 litres of luggage room.

The Q5 Sportback is produced with a wide range of petrol and diesel engine options in both four-cylinder and V6 guise, all shared with the Q5, although not all will be available at the start of UK deliveries in June.

Confirmed so far is only a 2.0-litre four-cylinder diesel engine with 201bhp, badged 40 TDI – the model that’s expected to account of the majority of British sales. In line with developments brought to other recent new Audi models, it features a new twin-dosing exhaust with two catalytic converters and an Adblue injection system that are together claimed to dramatically reduce NOx emissions, making the car compliant with the EU6d emission regulations that came into force at the start of this year.

Further options will be offered, including a pair of plug-in hybrids, though those aren’t expected until the final quarter of this year. All four-cylinder engines feature 12V mild-hybrid properties, while the V6 units receive a 48V system, both with a belt-driven generator. While there’s no shortage of engine choice, buyers are restricted to one type of gearbox: an automatic, or an S tronic, as Audi prefers to call it.

In the four-cylinder models, it’s an Audi-produced seven-speed dual-clutch unit mated to the Quattro Ultra four-wheel drive system that uses a hang-on rear differential - a set-up claimed to bring worthwhile reductions in consumption without any real dynamic deficiencies.

The more powerful V6 models, on the other hand, run a ZF-produced torque-converter automatic gearbox and Audi’s traditional Torsen four-wheel drive system, which gains a Sport differential with torque-vectoring qualities on the SQ5. 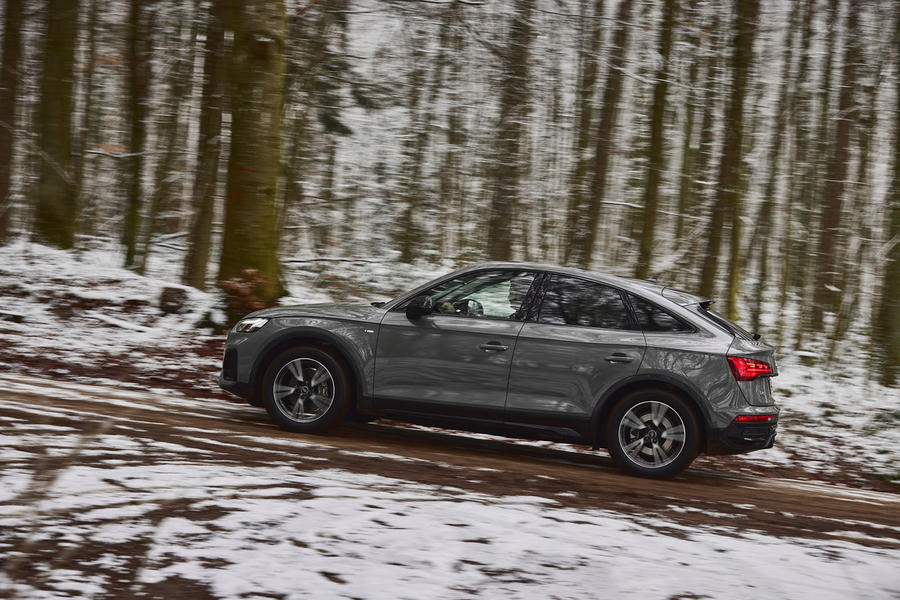 It’s the Q5 Sportback 40 TDI that we’re driving here. It isn’t exactly rapid but, with 295lb ft of torque between 1750 and 3250rpm, there’s a good degree of urgency to its delivery within the lower part of the dial. And it remains quite flexible through middling revs, so you don’t have to wring it to its 4800rpm cut out to find adequate performance.

Mechanical refinement is quite good, thanks to some extensive sound-deadening measures within the bodyshell that serve to isolate the engine noise. However, you’re still always aware of a low-key diesel chatter under load.

The dual-clutch gearbox provides an excellent spread of ratios and proves both smooth and quite keen on upshifts as it works to optimise economy. However, it occasionally wavers on downshifts, where you sometimes get light off-throttle shunt through the driveline as it decouples from the engine to enable coasting.

The latest evolution of Audi’s Quattro Ultra system operates in a seamless fashion, meanwhile, introducing drive to the rear wheels when grip levels demand it (or when you switch into Sport driving mode).

All Q5 Sportback models feature the Sport suspension available on the regular Q5, and upper-end models can be upgraded to an adaptive air suspension set-up offering 60mm of ride height variation to increase clearance over rougher terrain.

On the less sophisticated chassis, the handling is quite good; the car is keen to change direction and musters impressive body control as lateral forces begin to increase. It flows down winding roads in a precise and largely unflappable manner at checked speeds.

However, it does so without any great reward: the steering, while quite direct in its action, has a synthetic feel and is light in weight much of the time, gaining added heft only when you really begin to push.

Despite the 19in wheels and 235/55-profile Michelin Latitude tyres of our test car, the ride proved quite absorbent. It’s perhaps not quite as supple as some rivals over larger surface imperfections, but it’s far from the hard-riding proposition that the Q5 was earlier in its life. 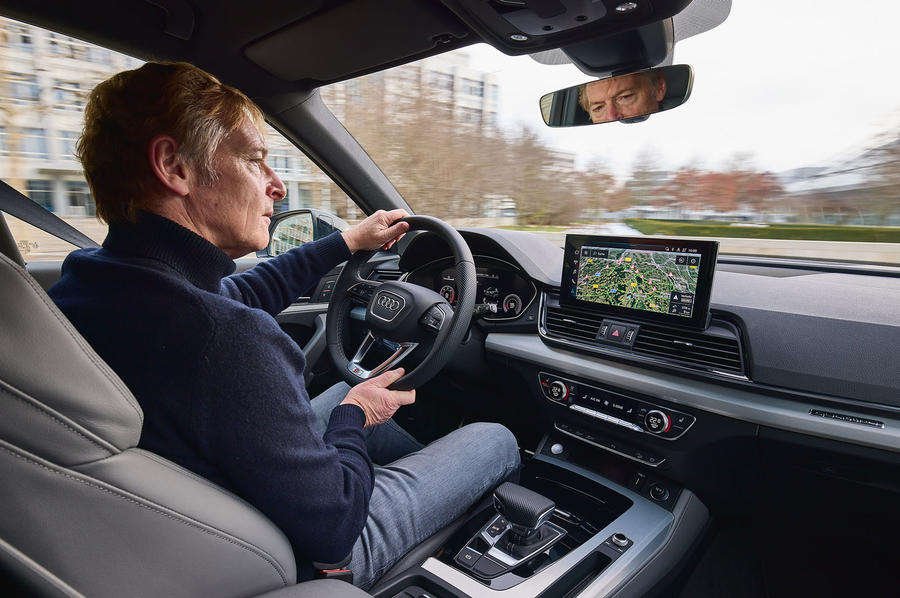 The Q5 Sportback is a nicely rounded package, then. One that comes with an impressive array of standard driver assistance systems, no less. Even so, the regular Q5 is nearly as good to drive but provides more space at a likely lower price.

If it’s a style statement that you’re seeking from your premium SUV, the Q5 Sportback will make obvious sense. However, its more upright sibling is, when all things are considered, likely the better buy. 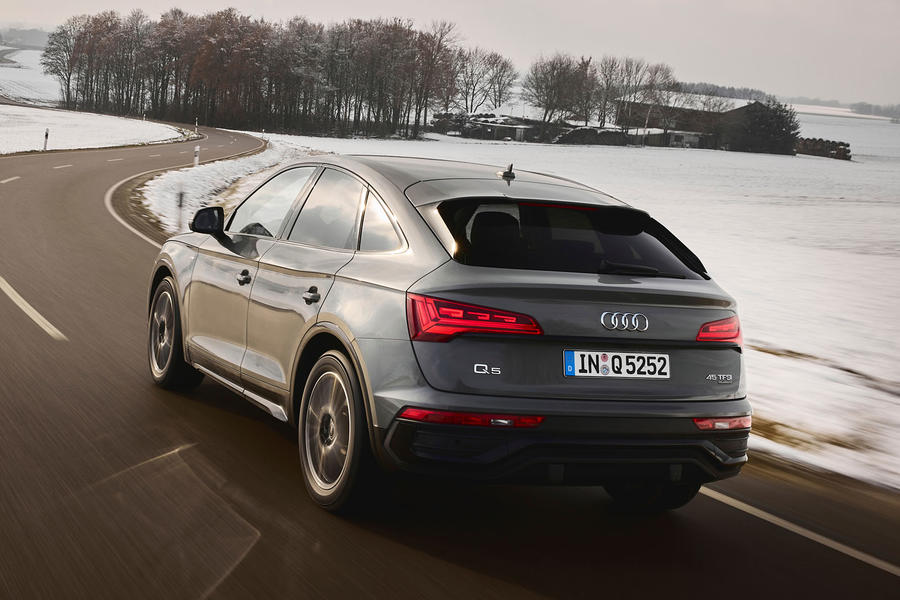 Surely, someone who would have previously bought a stylish sports coupe wouldn't now be buying this instead?  It certainly isn't pretty.

These 'coupe' SUVs seem a bit like the Emperors New Clothes to me...less metal and practicality for more money, because we are told they look better. I might be more persuaded if it had coupe-like frameless doors like the Q8