8
Share review
More power and styling tweaks for the iconic TT’s 20th birthday, which is as accomplished as ever – if not entirely thrilling
Share
Open gallery
Close

That the TT hasn’t really changed all that much since that first radical concept was revealed back in 1995 is testament to the strength of Audi’s industrial design.

It made the jump from show car to production car with only minor modifications, and you can still see that heritage in this facelifted third-generation model.

Rather than mess with a winning formula (this being the sports coupé us Brits buy more of than anything else), it will hardly surprise that Audi’s styling tweaks for 2019 are subtle. A honeycomb-effect makeover for the front grille, larger side air intakes, some new wheels and two new colour options largely keep the base TT looking fresh, while S-Line models go more aggressive with a full-length front splitter and rear diffuser.

Standard specification has seen a boost, too, with electrically folding, heated door mirrors and Audi’s drive select modes included across the range.

It’s underneath that sees more sweeping changes, with the 1.8-litre base engine of the outgoing car replaced by a more potent 2.0-litre four-cylinder. The entry-grade 40 TFSI gets 192bhp, while the mid-range 45 TFSI, as tested here, sees 242bhp. A more powerful still 302bhp tune is reserved for the TTS. All now come equipped with a petrol particulate filter, while diesel has been exorcised from the range completely.

Suspension remains by MacPherson struts at the front, four-link at the rear. Only front-wheel-drive models can be equipped with a manual gearbox; our car had quattro all-wheel drive and the new seven-speed, dual-clutch S Tronic automatic ’box, which is both faster and lighter than the six-speed set-up found in the old car. 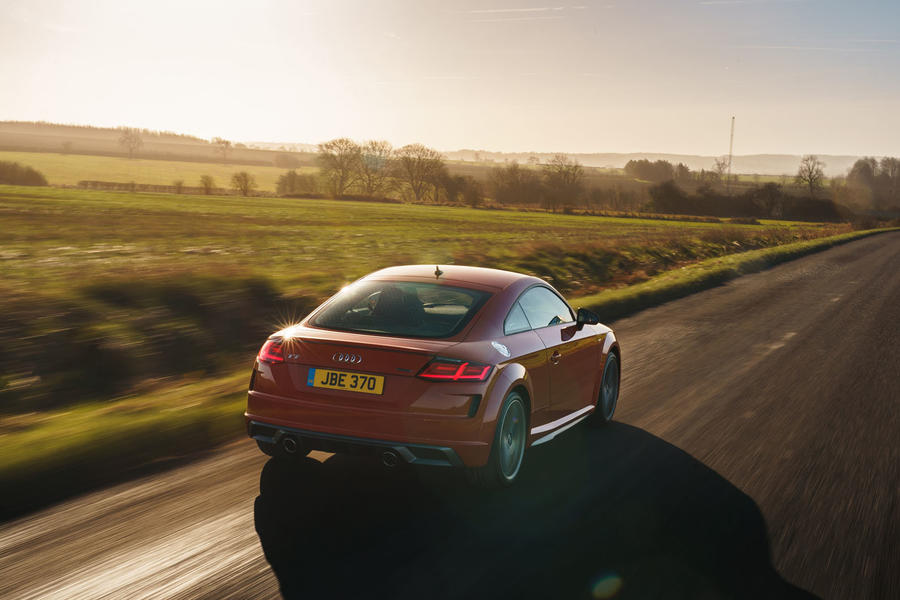 On the road, the TT is as reassured as it ever was, with an abundance of grip that allows for confident cornering at sufficiently high speeds. It’s agile and happy to change direction, while always staying controlled.

We noted that the new seven-speed gearbox was a welcome improvement on our first drive of the more powerful TTS on the Isle of Man last year, and that rings true here as well, especially in manual mode. It is much more willing to shift up and down with a flick of a paddle, with none of the hesitation of the old six-speed unit.

The TT may now be outpaced in a straight line by the top hot hatchbacks, but still manages the 0-62mph sprint in a very healthy 5.2sec - 0.2sec faster than the similarly priced BMW Z4 sDrive30i. That it does so in a manner that’s largely free from drama is what will irk purists.

The turbocharged four-pot sounds agreeable enough, shows little lag and is responsive right through the rev range, but achieving high speeds simply isn’t as entertaining as it can be in other sports cars.

This is partly down to the progressive steering, which while precise, is ultra-light and feels ever-so-slightly muted at speed - even after experimenting with the five different drive modes. Less enthusiastic drivers will appreciate this point-and-go approach, but it’s unlikely to please those searching for true engagement.

Sat on 19in wheels, the ride errs towards firm, though is sufficiently capable of cruising through town comfortably. Adjustable magnetic dampers are an option, though they weren’t fitted to our test car.

Inside the cabin, the TT is as classy as ever, with heated front seats and enough space in the rear ones for adults to just about squeeze themselves into. The rear hatch is still practical, with a segment-leading 305 litres of boot space - 712 if you drop the back seats.

The driver-focused dashboard eschews an infotainment screen in favour of Audi’s virtual cockpit display. The all-digital instruments are just as customisable as before, and while the oversized dial you control it with isn’t as straightforward as a touchscreen, it’s still one of the best systems you’ll find in the class. 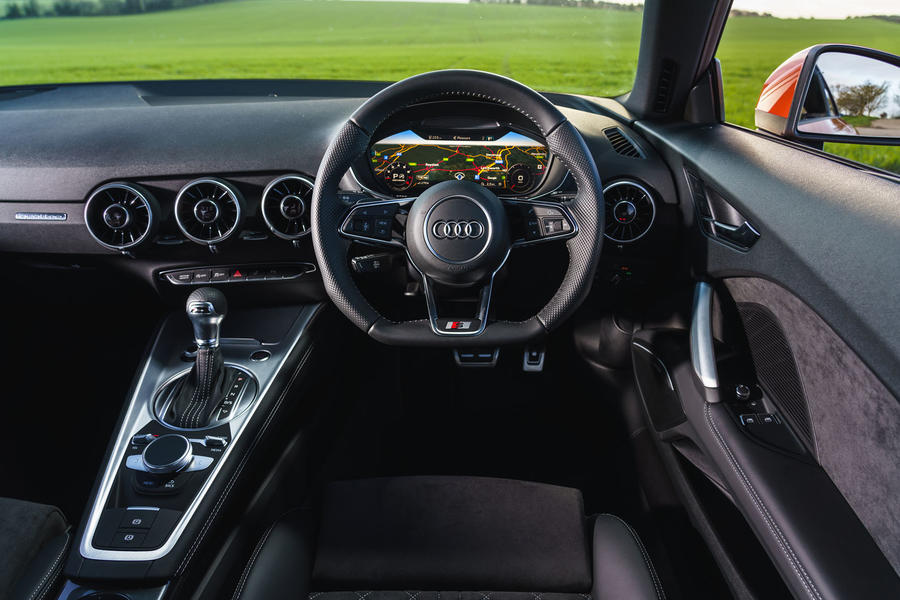 The TT had no shortage of fans. If you count yourself as one, then absolutely. By retaining the car’s core character, Audi has likely ensured this new version proves just as popular.

Drivers searching for more engagement will be better served by the BMW Z4, and once you’ve ticked a few options boxes on the Audi, a Porsche Cayman doesn’t seem too far out of reach, either, but neither are as accessible as this.

It’s through usable performance, interior refinement and some semblance of practicality that the TT continues to make a convincing case for itself. 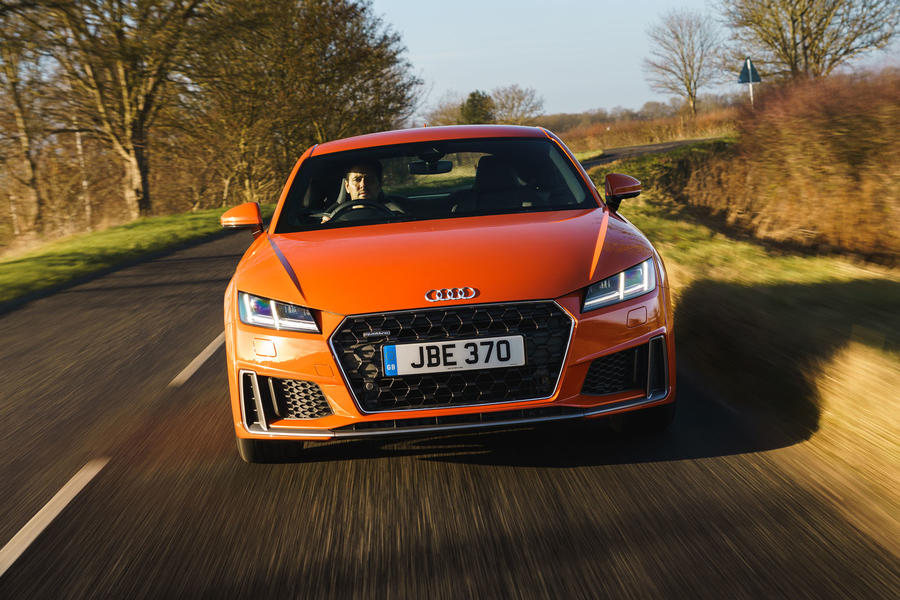 Still incredible value for a german sports car with a starting price of £31.5k which is only just above the special edition Mini high lighted yesterday in Autocar, or only £2,000 more than the 308GTI.

Still incredible value for a german sports car with a starting price of £31.5k which is only just above the special edition Mini high lighted yesterday in Autocar, or only £2,000 more than the 308GTI.

More posts, more nonsense to mock. This car and the previous two iterations all mainly constructed/finished in HUNGARY...so if a person is born in HUNGARY, are they as "GERMAN", as this car?.

You are comparing apples and pears...sigh. You've been rebuked many times regarding this stupidity. TwIT, the w is silent, as you should be.

Strange post, not least given the 2019 TT featured in this review is made at Ingolstadt, Germany. No need to spread incorrect information. But I see the new Land Rover Defender is being made somewhere in Slovakia, alongside the Discovery. Does that actually make them any less Indian?

As you seem to relate people to automobiles, a person's characteristics tend to be ascribed to their DNA, rather than to the location from where they came out of their mother's womb, or perhaps a test tube. I could understand if a car had been born in Hungary of foreign parents, then spent their formative years growing up in said country, it may perhaps prefer a goulash to a Bratwürste. But I suspect for most cars born in Hungary, or Slovakia for that matter, once they pop out they then pop off.

Why don't they just drop the stupid naming convention?

Even supposedly smart car companies are getting dumb

Audi TT 45? They have gotten stupid. If the car has 242bhp why don't just call it the Audi TT 242? Even supposedly smart car companies are getting dumb

Sorry to do this to you because you seem very worked up over this but 242 mechanical horsepower (HP) is equal to 245 metric horsepower (PS). Unless you are trolling?..

Instead of adding bits for a celebratory model, why don’t they just knock off a few grand?, I’m sure they’d sell more.....