There’s a small, reasonably discrete patch of empty space towards the front of the Aston Martin Vantage’s transmission tunnel that - back at its official UK media reveal in late 2017 - prompted a somewhat inevitable line of questioning from attending members of the press.

“Is that where the manual gear shifter is going to go, then?” was the general gist of these inquiries, all of which were levelled at boss man Andy Palmer. And as is so often the way with these things, his answer was far more nuanced than a simple ‘yes’ or ‘no’. Reading between the lines, said reply was certainly explicit enough to indicate that Gaydon very much planned on rigging the Vantage up with a manual gearbox at some point. Aston’s PR team was understandably less than thrilled with Palmer’s revelation.

Nevertheless, roughly two years later that car has finally arrived. Well, it sort of has, but we’ll get to that later on. For now, let’s look at how the nuts and bolts of this new Vantage differ from the regular model.

First up, the standard car’s eight-speed ZF automatic transmission has obviously been swapped out. Replacing it is the same seven-speed Graziano manual ‘box that appeared in the old Vantage V12 S, dog-leg first gear and all. This is the first time a manual gearbox of any description has been fitted to Mercedes-AMG’s twin-turbocharged 4.0-litre V8, which in itself is no mean feat.

Of course, certain sacrifices had to be made in order to facilitate the pairing. Overall torque has been capped in order to protect the transmission, so instead of the 505lb ft you get in the standard car, the manual makes do with just 461lb ft. That torque is again capped in first and second gears, though if you select Track mode you can have more. Power, meanwhile, remains at 503bhp.

Elsewhere, the standard car’s clutch-based active torque-vectoring E-Diff has been swapped for a mechanical limited-slip differential. Together, these mechanical changes mean the manual Vantage is some 70kg lighter than its self-shifting sibling, with that weight being distributed slightly differently too. The Vantage we road tested last year had its mass split 49:51 front-to-rear on our scales - in the manual Aston Martin says that ratio is reversed.

The suspension geometry has also been tweaked appropriately. At the rear, the spring rate has been slackened off slightly while the anti-roll bar has been stiffened, and both the front and rear dampers have been revised, too. Meanwhile, the EPAS software has been fettled, and the brake booster has been recalibrated to allow for easier heel-and-toe shifts. And If you’re not too hot on these, AMSHIFT provides a rev-matching function that will do all the hard work for you. 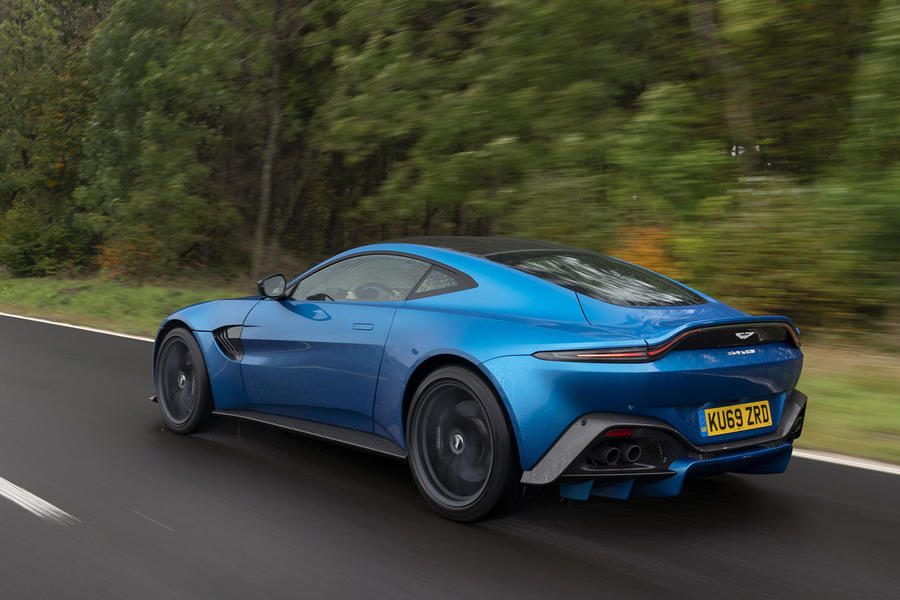 Aston chief engineer Matt Becker says that the retuned suspension should make for a Vantage that feels even more playful than before. You’d obviously need access to a track to explore these claims in full, but on the sodden roads that made up our test route the baby Aston certainly feels like a lively machine - even with the traction left on. A nudge of the throttle is all it takes to provoke the rear into momentarily stepping out of line, which it does in a gentle, gradual fashion that feels far more exciting than unsettling.

The steering is well-sorted too - both in terms of its weight and its gearing. There are 2.3 turns from lock-to-lock so it’s suitably snappy in its responses without feeling highly-strung or nervous, while resistance builds up nicely as you add lock on. It’s perhaps not as immediately communicative or confidence-inspiring as a Porsche 911 - in fact, the 911 still feels superior in terms of its overall handling precision and balance - but the Vantage is a long way off from being unpleasant.

There’s a pervading sense of tautness about the Vantage’s ride, yet on smoother roads and motorways it seems to find a healthy reserve of pliancy to help make forward progress an impressively cosseting undertaking. That said, the moment you find yourself on battered, patchwork-like surfaces this composure does go out the window, and its ride becomes reactive and unforgiving. But the upside, of course, is that the Vantage corners flat and fast and is generally a wonderfully engaging machine to flow down a particularly technical stretch of road. Of course this could also prove an issue back on home soil, but we’ll have to wait and see.

And as for the main event? In short, it’s fantastic. The dog-leg configuration of the manual ‘box might take a bit of time to wrap your head around, but it’s absolutely worth the effort. Its pairing with the AMG V8 not only feels incredibly special for the more intimate and organic nature of the control it allows you to exercise over this magnificent engine, it’s mechanical calibration suits the motor’s thunderous temperament down to the ground.

The shifter itself fills the palm of your hand, its action deliberately assertive and powerful without being overly notchy or difficult to interact with. The movement from first to second gear isn’t quite natural (it can be overly eager to spring back towards neutral, making second easy to miss), but the engine develops so much low-down torque you can skip first altogether and comfortably set off in second.

This particular manual is absolutely more of an acquired taste than most, and Becker freely admits this. “The dog-leg ‘box is a bit Marmite, but the process of learning how to use it provides a rewarding additional level of engagement” He’s not wrong.

The engine, meanwhile, remains as fantastic as ever. Yes it doesn’t feel quite as rapid as the automatic, but a 0-62mph time of 4.0sec is still plenty quick enough. In fact, the familiar sense of frustration that so often stems from feeling unable to use all of an engine’s performance on the road isn’t really an issue here - you feel as though you can use everything in the lower gears without potentially jeopardising your licence. The timbre of its angry, menacing baritone snarl is thrilling too. 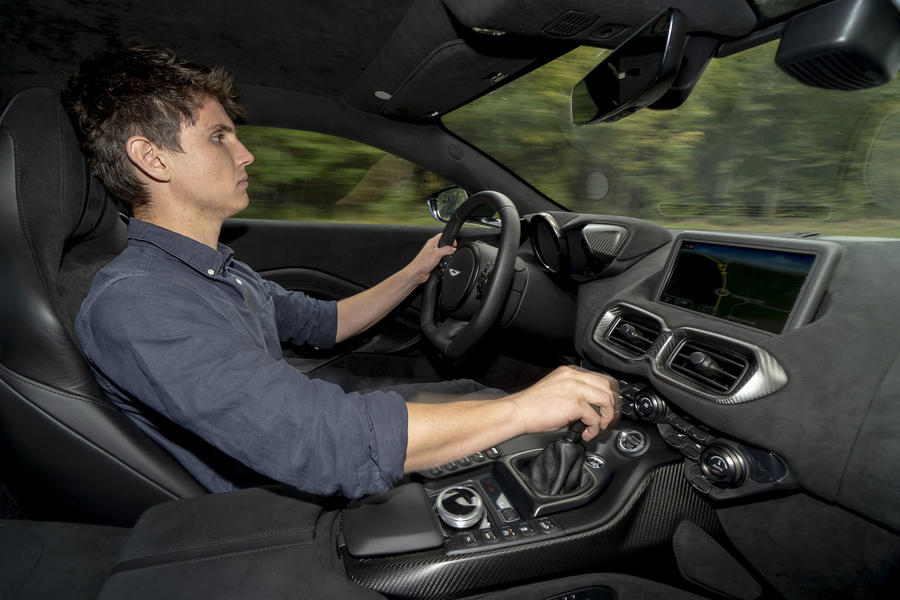 This is where it gets a touch complicated. At the moment, the only version of the new manual-transmission super sports car you can actually buy is the limited-run Vantage AMR. Just 200 will be made, and they’re priced from £149,995. From around April next year, the Vantage manual will become a regular model, but it won’t be done up to quite the same specification as the special edition.

Our test car was not an AMR version. In terms of performance the two are the same, but the regular cars miss out certain trim finishers, as well as the carbon brakes that come as standard on AMR cars. Somewhat confusingly, our car had these (admittedly rather good) carbon brakes added back on, but Aston was unable to say how much the base model will cost at the time of writing. Considering the automatic comes in at £120,900, it seems reasonable to expect the manual to be somewhere in that ballpark.

That said, there will be a cost associated with making the manual transmission work with this engine. Aston has also said that it only expects a small proportion of Vantage buyers to opt for the stick shift, and that it won’t find its way to any other models. If there is a price premium involved let’s hope it’s not around the thirty grand mark.

Cost aside, though, in this tester’s mind this is absolutely the Vantage to have. The standard car was never really one that I gelled with, but the heightened level of interaction the manual ‘box introduces along with the additional dimension it adds to the car’s character absolutely rectifies this. 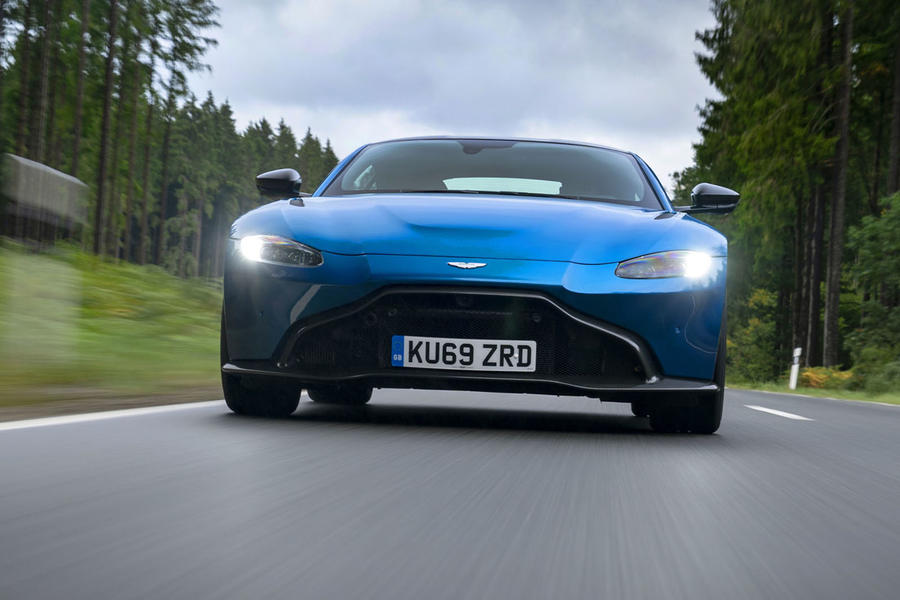 Lovely car. I don't understand the point behind limiting the torque though. The manual gearbox in a C7 ZR1 can hold over 700 lb-ft of torque easily, and weighs about the same as this gearbox. Are graziano's engineers less capable than Tremec? I doubt it. Just seems like a weird excuse and justification for using an old gearbox. The gearbox used in the C7 is a Tremec TR-6070, weighs 144 lbs, and only cost a couple thousand dollars.

I hoped for better from Aston but unfortunately most British sportscars are rife with issues from cost cutting in all the wrong places. Wouldn't stop me from buying the car, but just embarassing.

Major credit to Aston for

Major credit to Aston for keeping the manual 'box alive.