This is the latest version of Alfa Romeo’s strong-selling Stelvio, which can already claim to be one of the more dynamic SUVs on sale today. It has been largely responsible for turning around the marque’s recent fortunes, alongside the Alfa Romeo Giulia compact saloon, but Alfa itself admits there’s still room for improvement in what is a fiercely competitive category.

It’ll come as little surprise, then, that this facelifted model focuses on improving the one area prospective customers have been most critical of: perceived quality. Indeed, when we road tested the Alfa Romeo Stelvio in 2017, the cabin stood out as “stylish enough to impress at a glance,” but was disappointing in terms of materials quality on closer inspection.

Almost every other aspect of the car remains unchanged, including the line-up of 2.0-litre petrol and 2.2-litre diesel engines. Alfa Romeo falls behind other FCA brands in the running to receive electrified powertrains, and the fire-breathing 2.9-litre Quadrifoglio V6 won’t be updated until the middle of 2020. It is tested here as a top-spec oil burner, with 207bhp sent to all four wheels through an eight-speed automatic gearbox and Alfa’s Q4 all-wheel drive.

This refresh also sees the range simplified to Super, Sprint, Ti and Veloce models, with black badging to signify sportier trim levels and silver for more mainstream versions. Ti cars now get contrasting side skirts, wheel arches and a rear bumper meant to invoke the Alfa 164 of the 1980s, while Sprint and Veloce versions receive colour-matched mudguards. 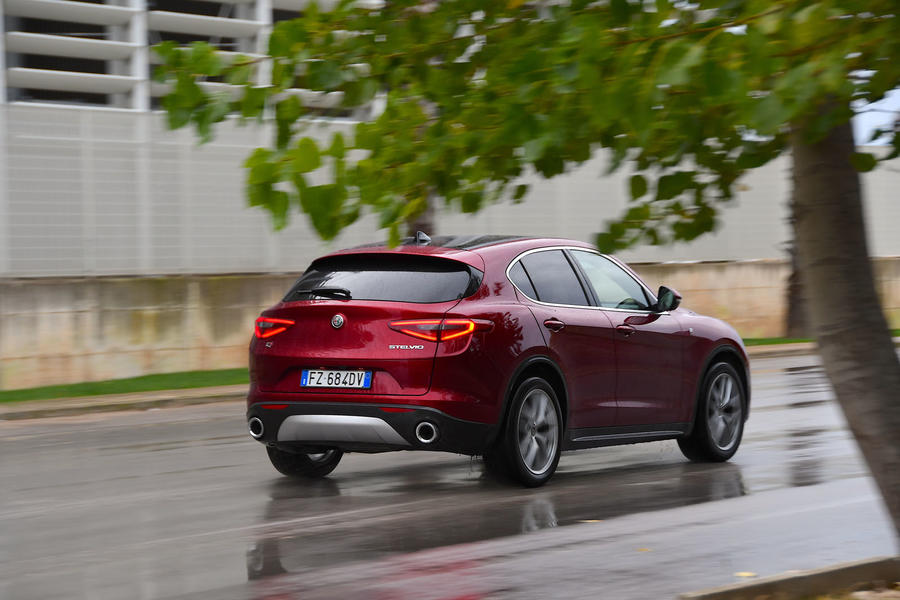 Step up into the updated Stelvio expecting a complete interior transformation and you’ll be largely disappointed: the design team clearly had to work within the confines of the existing layout, but the general arrangement remains the same, although materials used are a real improvement.

Cheaper plastics are almost entirely removed, with the centre console now featuring glossier fixtures that both look and feel more premium. Stowage beneath the central arm rest has increased, with wireless smartphone charging added for the first time. The rotary infotainment dial doesn’t feel cheap or flimsy any more, turning smoothly and without the overly shiny plastic finish of the outgoing car, and the subtle Italian tricolore above it is another nod to the brand’s history.

The gear lever is now leather-wrapped, rather than plastic, and feels all the better for it - though with the immensely satisfying aluminium shift paddles flanking the steering wheel, it remains second choice for taking manual control of the gearbox.

The infotainment display recessed into the dashboard stays at 8.8in, but now recognises touch inputs for the first time. More importantly, the entire interface has been redesigned, with a customisable, widget-based layout that lets you put the features you use the most on the main screen. It’s a major improvement over the old system, with modern graphics and intuitive controls that work equally well with the physical rotary dial. Apple Carplay and Android Auto are both available, but given the scale of improvement to Alfa’s own system, you may feel you can do without.

Less transformative is the instrument cluster, which still uses a central screen flanked by analogue dials. As the likes of Audi, BMW and Jaguar move to fully-digital clusters, this design feels slightly behind the curve, but an updated layout does at least account for the new driver assist systems. Adaptive cruise control and lane keeping assist bring the Stelvio up to par with the rest of the class, though the latter proved rather insistent on our Italian test route.

On the road, the four-pot diesel engine delivers confident performance, and although it’s largely done by 3500rpm, the gearbox is quick to supply a fresh cog in each of the three driving modes. It’s not the most refined of engines, but keeps noise to a minimum while at cruising speeds.

The Stelvio is as dynamic as ever, with more handling charisma than you’ll find in many of its rivals. In admittedly damp conditions, it took little effort to coax out oversteer when in Dynamic mode, with the same quick steering rack as the Giulia and a lenient stability system, though one that can’t be disengaged completely.

This dynamism does come at the cost of ride quality, which becomes busy on rougher road surfaces. An Audi Q5 feels more composed on motorways, but it can’t match the Stelvio for driver engagement. 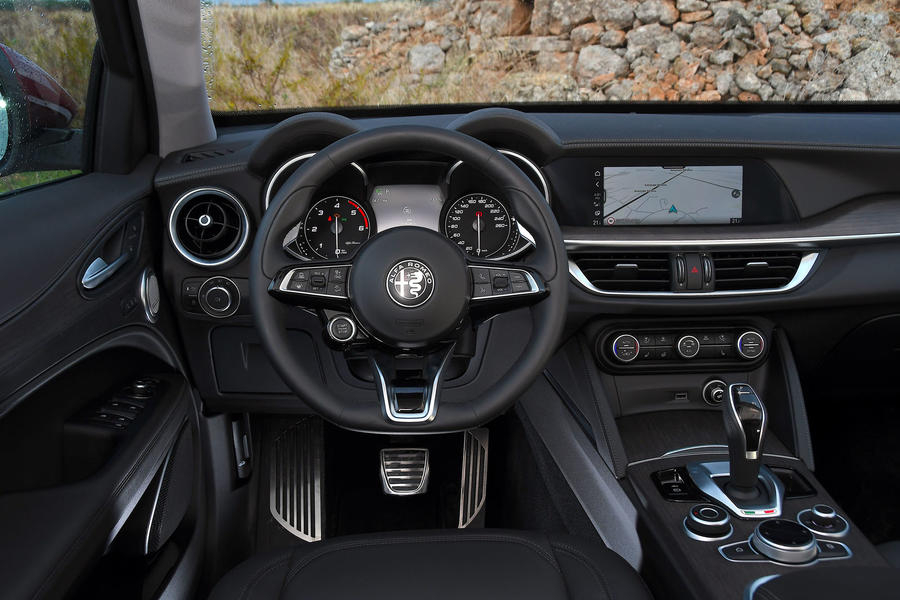 Ultimately, the interior improvements help keep the Stelvio relevant, though they don’t go far enough to make it the default choice over the equivalent Audi, BMW X3 or Mercedes GLC. All three still best it for interior presence, though the gap is nowhere near as big as it once was.

But at the same time, none of those rivals have made any major gains in terms of handling dexterity - making the Stelvio a prime choice for those in search of such involvement. 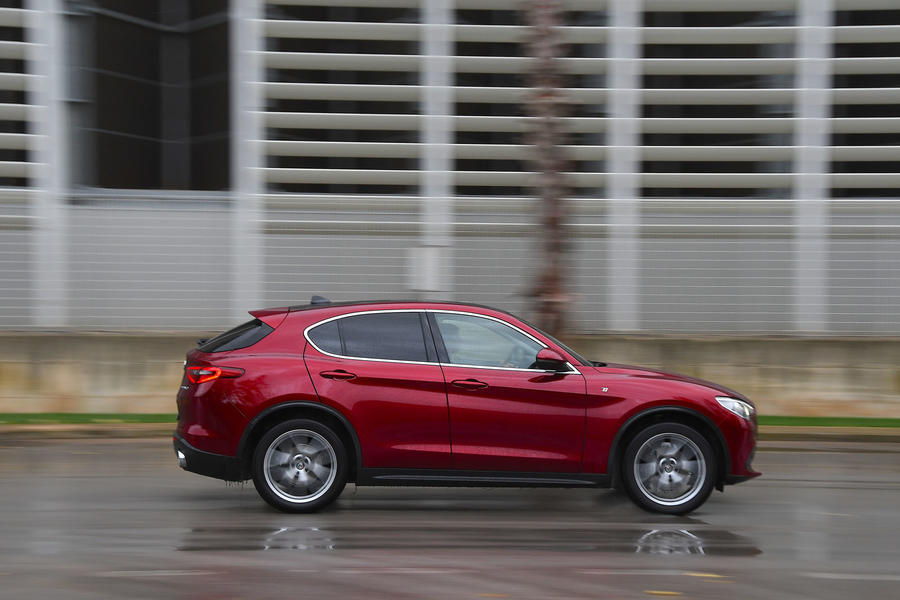 When you give a child to read both Stelvio reviews (the pre and post facelift), they will fairly wonder, how both writers can contradict themselves.

The car is significantly improved on the some areas (plastic interior parts), it has the best handling,steering,vehicle dynamics out of all soulless JLR, Gaudi, BMW, Merchedes and they didn't even bother to change the star rating.

These guys are the ones you meet on the road either A or B roads and make them feel so depressed when you over pass them with your 3.5 star car.

These people lead the market and convince the potential buyers with their inability to express anything more than they were paid for from ze german and the shocking JLR reliability.

My verdict: Get an Automotive University degree, read a bit of Automotive history, learn about what a car review should look like and then expose yourselves to the world through the internet.

An honest rating from Auto Express. Not like this rubbish in Autocar.

So it's a great drivers suv much improved interior stylish alfa etc etc...why not 4 stars? Usual German bias then.
View all comments (8)