From £31,6908
Share review
Even without the snarling twin-turbo V6 from the Quadrifoglio under the bonnet, the Alfa Romeo Stelvio is still a compelling driver's SUV
Share
Open gallery
Close

Putting both the snarling, fire-breathing Quadrifoglio-badged model and the limited-run Milano Edizione launch special firmly to one side, this Stelvio Speciale is the poshest version of Alfa Romeo’s Giulia-derived SUV you can get your hands on.

And with a 276bhp turbocharged four-cylinder petrol engine under the bonnet, it’s also one of the quickest. Of course, this greater degree of performance and pedigree does come at a higher cost; to get one, you’ll have to part with a not-so-miserly £43,705.

So, what does your money get you, aside from what we already know to be one of the more agile, keener-handling SUVs currently on sale? Mostly, it’s a healthy amount of standard kit. Even before you delve into the options list, Alfa Romeo will throw in full leather upholstery, heated front seats, an 8.8in infotainment with DAB radio and navigation, 19in alloys, a heated leather sports steering wheel and a veritable arsenal of active safety systems. Not a bad haul, really. 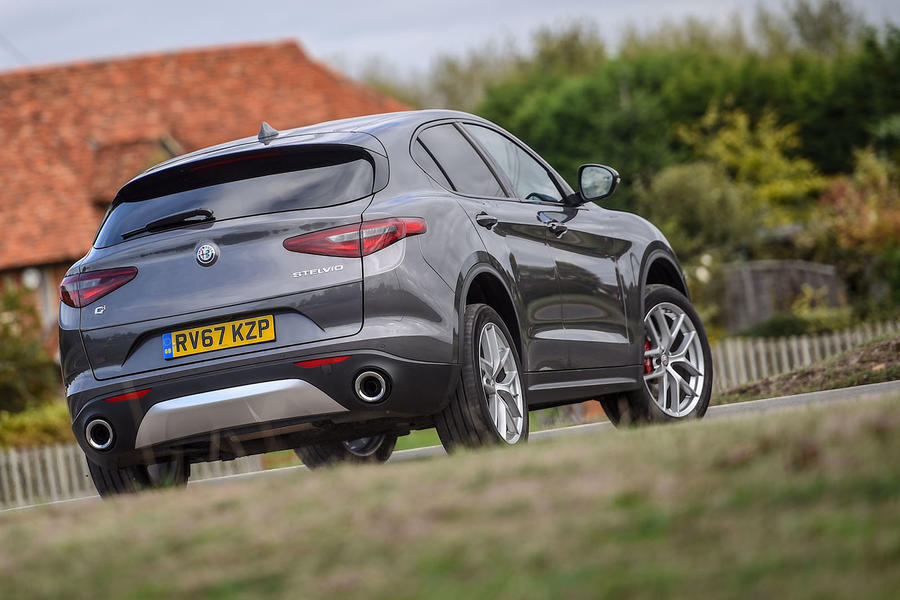 While that all might sounds fairly convincing on paper, when you get settled behind the wheel you’ll likely find that the Stelvio Speciale leaves you wanting slightly in terms of material quality; especially when you consider it’s pitched to take on the likes of the Audi Q5 and Porsche Macan.

Much like the Giulia saloon with which the Stelvio shares much of its interior aesthetic with, from a distance you can see that some effort has gone in to making the SUV’s cabin appealing on the design front. Cool monochrome colours are used in abundance, that 8.8in touchscreen is integrated cleanly into the dash fascia, and the steering column-mounted metal paddleshifters provide a clear hint of the Stelvio’s sporting pretensions.

Under closer inspection, however, you’ll find that many of the materials used in the Alfa’s cabin seem to be fashioned from fairly low-grade materials. The aluminium-effect panelling on the centre console, for instance, feels cheap; while the rotary dials that control the infotainment and drive mode selection are made from what feels like rather flimsy plastic.

That said, while the execution of the cabin’s finish might not quite be up to the standard you’d expect from a near £44,000 SUV, there are things it gets right. Driving position, for instance is spot on. The supportive, well-bolstered seats hold you firmly in position, and while the steering column could perhaps do with with a touch more adjustability for reach, there’s no noticeable offset.

It’s roomy, too; there’s enough head- and legroom in the second row to ensure two adults will be able to sit in comfort over a longer journey, while it’s 525-litre boot is larger than a Porsche Macan’s (500 litres) and only marginally smaller than an Audi Q5’s (550 litres).

So as a premium offering, the Stelvio Speciale is a bit hit and miss. The likes of BMW, Porsche and Audi all have it licked as far as perceived and realised quality and finish are concerned.

Out on the road, though, it remains a very compelling thing indeed. Knock the DNA drive mode selector into ‘Dynamic’, and and the Stelvio’s already prevalent sense of urgency will be amplified.

Doing so will add a bit more heft to the steering rack, which, at 2.25 turns lock-to-lock, lends the Stelvio a front end that’s incredibly keen on the idea of changing directions quickly, throttle response will become more immediate, and gear changes much snappier. As adaptive dampers aren’t a standard feature here, the ride won’t be affected; which is a good thing, as there’s a noticeable fidgetiness at town speeds. But get the Stelvio out on a faster, stretch of B-road, where more energy can through the suspension as the car interacts with the topography of the road, and the Stelvio will start to shine.

With a fair lick on, the inherent stiffness of the Stelvio’s set-up makes for closely-controlled vertical movements over undulating surfaces, but equally doesn’t give way to any uncouth crashing over cats-eyes or pock-marks. The restrained fashion in which lateral roll is doled out makes for impressive composure through quick-fire directional changes, too.

The 2.0-litre petrol engine, meanwhile, is impressively enthusiastic, if a little lacking on an outright sense of theatre. But for a degree of lag, it’ll pull tenaciously from about 2000rpm, and will continue to do so right until the point it hits its limiter at 6000rpm. And you’ll tease that limiter time and time again, too; this engine certainly isn’t averse to being thrashed.

Left to its own devices, the eight-speed ZF transmission will swap cogs out with an impressive sense of fluency, but opting to change ratios yourself via the beautifully tactile paddleshifters is far more preferable. The Stelvio isn’t afraid to show off the rear-drive bias of its Q4 all-wheel-drive system either; with little in the way of coaxing required to see the back end step out of line. 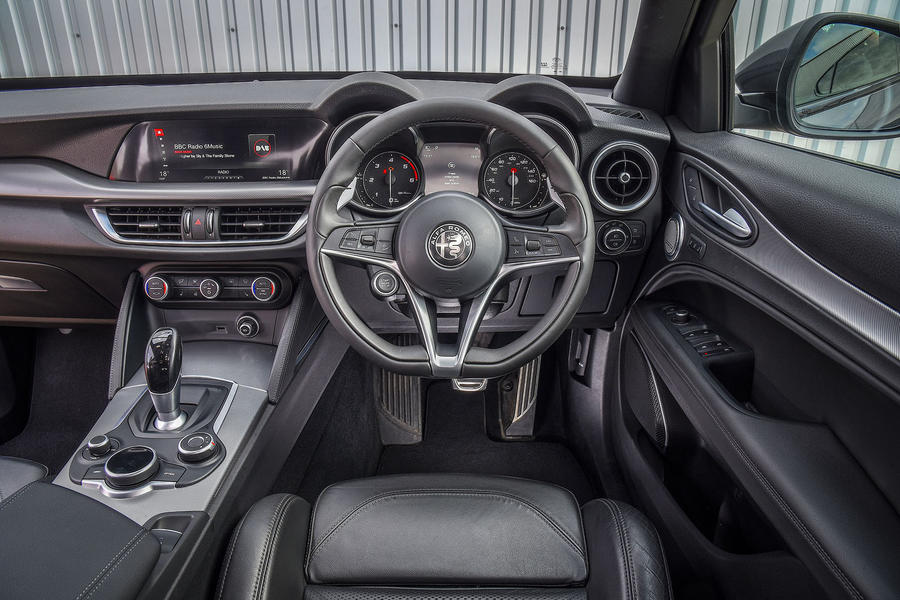 That depends on what you’re really in the market for. If it’s a refined, comfortable and well-finished SUV, then the likes of an Audi Q5 will probably suit your needs more than the Stelvio. The chopiness of the low-speed ride and at-times questionable quality of materials used in the cabin will likely be a turn-off for some.

If, however, you want an SUV that’ll engage and excite your senses when the road clears and you’ve got nowhere else to be, you won’t go too far wrong with the Stelvio Speciale. 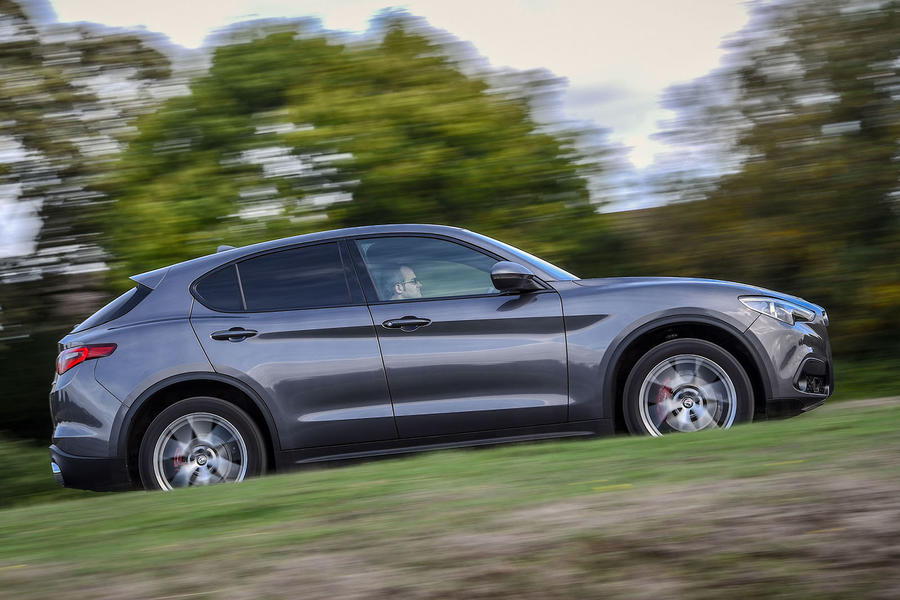 Agree the cheaper ones

Are much better value. And the the perceived stuff is just fine at 35k.

Why does Autocar find those stated KIT items as being special and worthy of the ticket price.,The simple Otavia we recently purchased (assembled in Russia where we live which negates 35% duty) but STANDARD so called kit included

Floor lighting in all footwells

Auto lighting for day and night

grab handles which cruise smoothly back into position

just to mention some..and of course built on the MQB platform same as the Audi A6 and Passat its so damned quiet inside (6 speed auto) and whilst no racing car, I am happy to only consume 7.2 litres every 100kl which includes 80% town work)

The seats are comfortable the stearing is ajustable for reach and height, it has sport and standard drive modes, and the price...lol wxactly 15,000 pounds, oh and we pay 0.45 pence per litre for 95 octane

Why does Autocar find those stated KIT items as being special and worthy of the ticket price.,The simple Otavia we recently purchased (assembled in Russia where we live which negates 35% duty) but STANDARD so called kit included

Floor lighting in all footwells

Auto lighting for day and night

grab handles which cruise smoothly back into position

just to mention some..and of course built on the MQB platform same as the Audi A6 and Passat its so damned quiet inside (6 speed auto) and whilst no racing car, I am happy to only consume 7.2 litres every 100kl which includes 80% town work)

The seats are comfortable the stearing is ajustable for reach and height, it has sport and standard drive modes, and the price...lol wxactly 15,000 pounds, oh and we pay 0.45 pence per litre for 95 octane

Your Skoda does not share a platform with the Audi A6. That is based on Audi’s MLB - similar sounding but entirely different.

I agree with the comments above... Autocar seem to be to bothered by what they perceive as material quality.  I have sat in and test driven several Stelvios and only saw a classy interior (though I was coming froma Giulietta) and a fantastic car to drive.

As for the comment about it being too expensive.  Given the standard equipment and safety features that come standard there is no way this is the case comapred to its rivals.

However, I may be biased... I have ordered a Stelvio... albeit a more "basic" Super version with a 200PS Petrol engine.  Can't wait!