10
GTA name returns to an Alfa – and what an Alfa it is. The best super-saloon made even more super
Open gallery
Close

One of the good things about an Alfa Romeo Giulia Quadrifoglio is how it flows down a bad road. Instead of pummelling and bashing along, our favourite sports saloon has a deftness and pliancy to the way it rides and steers.

The excellent news is that, while in pursuit of more performance and engagement, the new limited-edition Giulia GTA, tested here on British roads for the first time, retains (spoiler alert) all of that appeal.

This could be a surprise. This is an Alfa Giulia given the Jaguar XE Project 8 or BMW M4 GTS treatment: the full send into raciness. It’s a 500-off limited run of turned-up, tuned-up super-saloon, available in either GTA form or, as tested here, as the even more hardcore GTAm. Buyers are reportedly roughly evenly split between the two. In either form, it’s an awful lot of money – whatever €176,500 (GTA) or €181,500 (m) translates to when it arrives.

And it is an extreme car. Common to both flavours is more power than a standard Quadrifoglio, with the 2.9-litre 90deg V6’s output pushed up by 30bhp to 533bhp, while torque is unchanged at 443lb ft. It drives only the rear wheels still, through an eight-speed automatic gearbox. 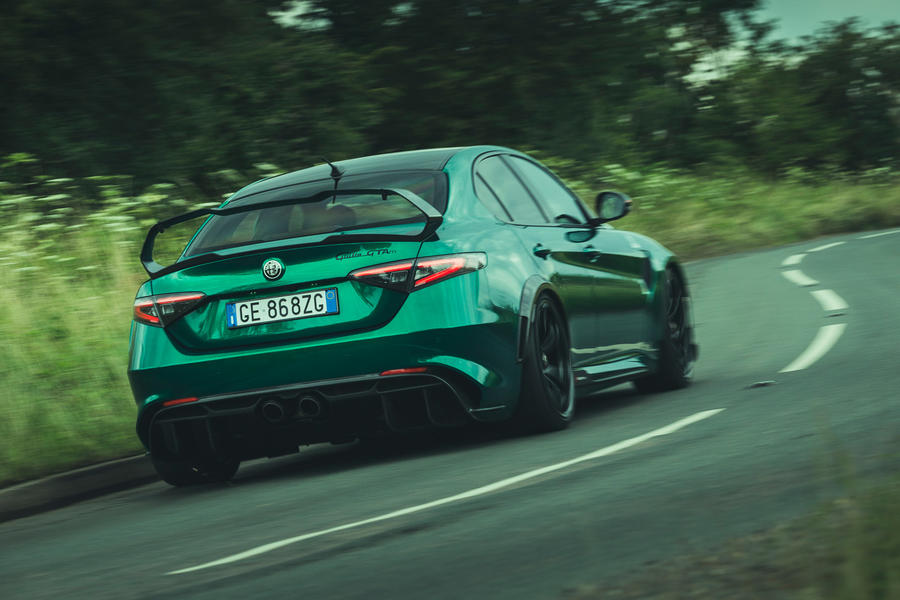 Weight has come out all over the place. The bonnet, roof and front wings are carbonfibre. This GTAm version takes that several steps further – steps that could be too much for some, hence the even split between the two models. Out go the rear seats, opening rear windows and the door cards, while in comes a roll cage, six-point harnesses and fixed-back Sabelt carbonfibre-backed seats. Rear door skins, rear side windows and the rear window are plastic. Where each rear seat base would have been is a netted cubby to hold a crash helmet, there is a shiny fire extinguisher between them and an Alcantara bulkhead between all that and the boot.

Chuck in even more Alcantara and fabric door pulls and things in the GTAm look very racy indeed; although, sensibly, air conditioning and the infotainment system remain. I suppose removing them sometimes seems like a good, no-compromise idea across a boardroom table. But I’m told that when one supercar manufacturer offered a special model without all those niceties, but allowed buyers to specify them back in as a no-cost option, only one car was delivered without air-con and sound, and that was a press demonstrator.

Also unique to the GTAm is adjustment of the front splitter, which with an allen key can be unbolted and pulled forwards by 40mm, and three-step adjustment on the rear wing. Alfa Romeo’s Formula 1 partner Sauber apparently helped develop the aero, hence the diddy decals on the side skirts, while hidden beneath the body, but jutting out as the lowest point between the wheels, are two carbon vanes that look like they’ll succumb to a gnarly speed bump.

The enhanced aerodynamics, including a rear splitter flanking a titanium Akrapovic exhaust, is said to increase downforce over a Quadrifoglio by 300kg, assuming you get the car towards its 191mph top speed. The regular QF is said to make positive downforce, which is by no means a given on a sports car, let alone a saloon. So this should feel quite planted. 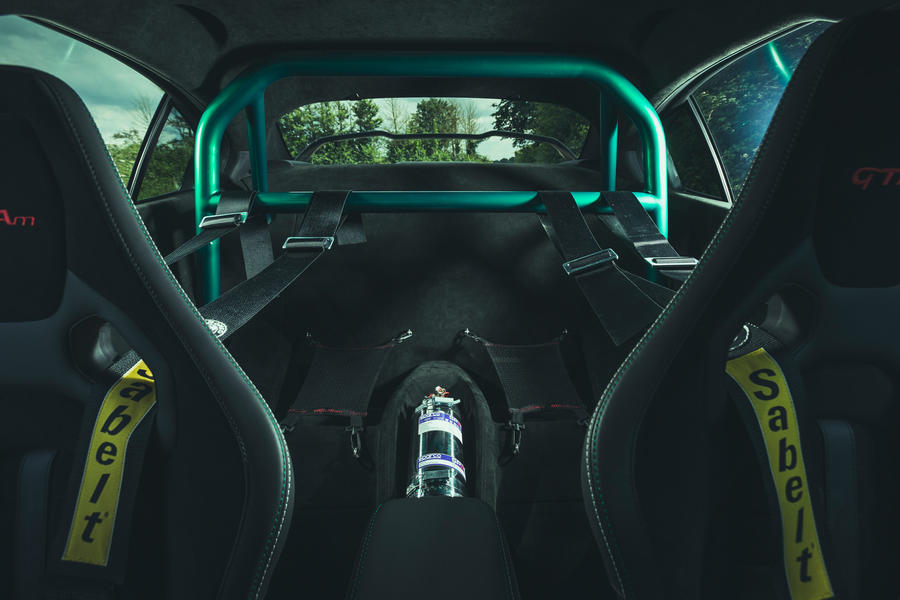 Not that this matters a great deal on the road in the UK, where speeds don’t generally let you get into the realm of aero unless you’re being chased by a helicopter. They don’t tend to necessitate six-point harnesses, either, which are great for a circuit but mean you can’t reach for a car park ticket. The inertia reel belt is still fitted anyway and, given the Alfa bongs if you don’t engage it and it’s threaded through holes in the exquisitely supportive Sabelt seats so that sitting on it is uncomfortable, I’d leave the harness aside and just use the belt. (Then buy a buckle like car dealers use to keep cars quiet when moving them around the yard, to shut it up while you’re harnessed on a track.)

Push the steering wheel’s start button and the Alfa whomps to a heavy-breathing idle and defaults to ‘n’ on its drive mode switch, which puts the adaptive dampers in the softest of their three modes. The steering is light, quick at just over two turns between locks and accurate but easy, while the engine has a soft response from standstill and, given the auto is a torque-converter unit, it’s very easy to mooch around – with minor grabbiness of the carbon-ceramic brakes the only point of awkwardness.

Despite 20in rims and Michelin Pilot Sport Cup 2 tyres with 265/30 and 285/30 profiles, it supplely knocks hard road surface edges aside. Hardcore performance cars are not meant to be like this. It’s even very relaxing on a motorway, with the ’box’s plentiful ratios meaning it’s spinning quietly at 1800rpm at 70mph. If you are driving to your favourite road, or a track, getting there might be as nice as being there. 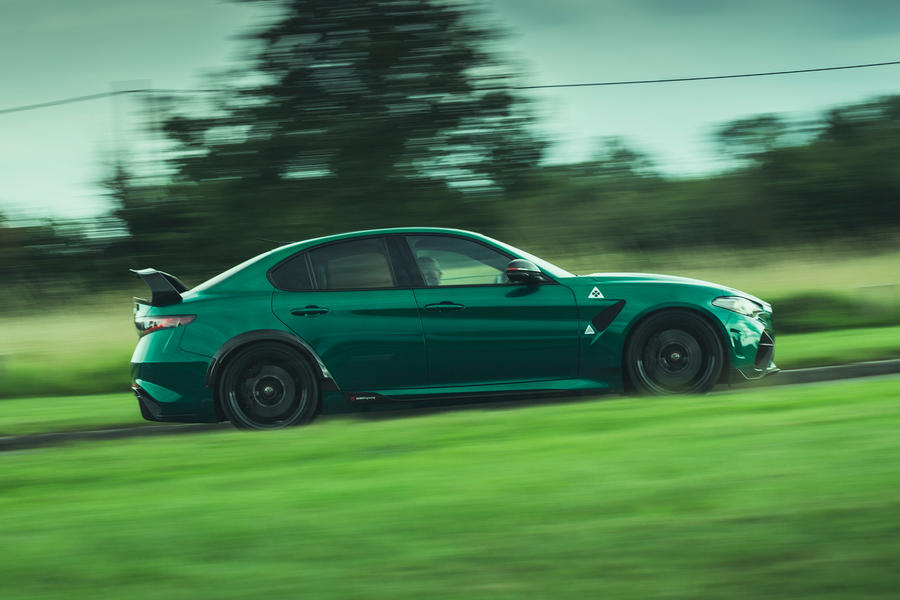 But not quite. With the standard Quadrifoglio, Alfa created a brilliant sports car and, here, it has turned it into something even better. The engine is ever smooth and ever responsive, as short geared in the lower ratios as it is generous in higher ones – second is over before 60mph – so that you’ll use anything from second to fifth on a good road. I quite like the big flappy paddles, affixed to the column so they’re always where you left them, and while the ’box doesn’t shift with the instant slam of a dual-clutch unit, it’s plenty responsive. That initial grab of the brakes around town turns into meatyresponse on the open road, and although their feel is perhaps still the weakest element of the dynamics, it’s like having normal toenails is the worst bit of being a superhero.

Generally, this car has it all. A brilliantly responsive front end, a little roll, an uncanny ability to absorb bumps – the middle damper setting is best for country roads, I thought – and a clutch-based, torque vectoring rear differential that, like the best electronically controlled limited-slip diffs, is open on the way in to corners and hooks up to help drive the car straight on the way out. On a circuit, the regular Quadrifoglio takes a moment to divert enough power to unsettle the rear, but on the road, where driving sideways in something as fast as the Space Shuttle is stupid, there is ample torque andresponse for the GTAm to feel really alive. 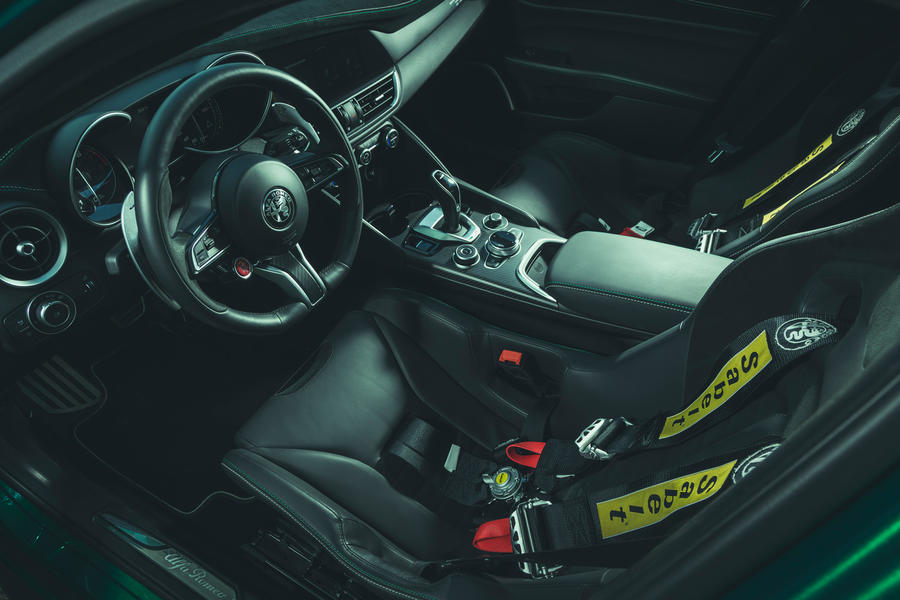 There’s usually something divisive about cars like these extreme performance models. The Project 8 was hyper-responsive, and its drivetrain calibration whacky. Some of my colleagues still get very excited with their hate for the M4 GTS, mystifyingly. But I don’t think that’ll be the case here.

Everything that was good about the Giulia Quadrifoglio you’ll still find here. The GTAm removes nothing but weight, and adds fever, specialness and involvement.

And, yes, price. But honestly, it is everything. 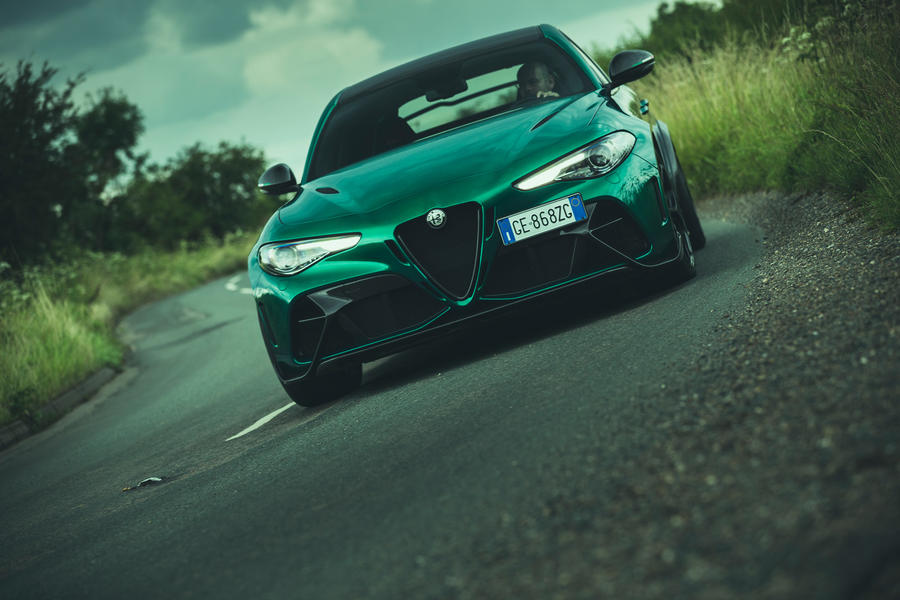 Standard GTA is quite enough, at 200k it's to much to chuck down a race track and not good enough as a family sallon. Since when is 1600kg a lightweigt striped out 2wd saloon.

I wished they had made this a coupe at the same time. Sounds like a great car, though, even at a crazy price