It’s young enough to look new, but old enough to be a bargain
Open gallery
Close

It would be a harsh but fair assessment to say that it took two goes to get the Audi Q7 right. The first-gen Audi, launched in 2006, was solid and premium but the driving experience was pretty poor and its firm ride and shortage of interior space left us feeling short-changed.

However, all that was set right in this second-generation model, launched in 2015 and revised for 2019, when a facelift introduced some styling tweaks and mild-hybrid assistance for the engines.

Initially, there were two versions of the 3.0-litre TDI diesel, the 218 and the 272, and both offered plenty of oomph. There was also a plug-in hybrid E-tron version, which felt even quicker, but for real pace there was a mighty SQ7 with a 4.0-litre V8 diesel. Models from 2019 onwards featured the same 3.0-litre diesel with 228bhp and 282bhp, now known as the 45 TDI and the 50 TDI, and a 55 TFSI petrol version.

Click here to buy your next used Q7 from Autocar

There were two trim levels on the earlier cars, SE and S line. SE came with satnav, Bluetooth, dualzone climate control and xenon headlights. S line brought more aggressive styling and larger, 20in alloy wheels that did nothing for the ride comfort. Post-facelift models offered two extra trim choices to the existing Sport and S line: Black Edition and Vorsprung. These new costly trims added cosmetic updates and most of the luxuries you could conceivably want or need.

To drive? Well, it comes as standard with four-wheel drive, so there’s plenty of traction. The suspension allows quite a bit of body lean through corners, but it’s still far more agile and better tied down than a Land Rover Discovery. 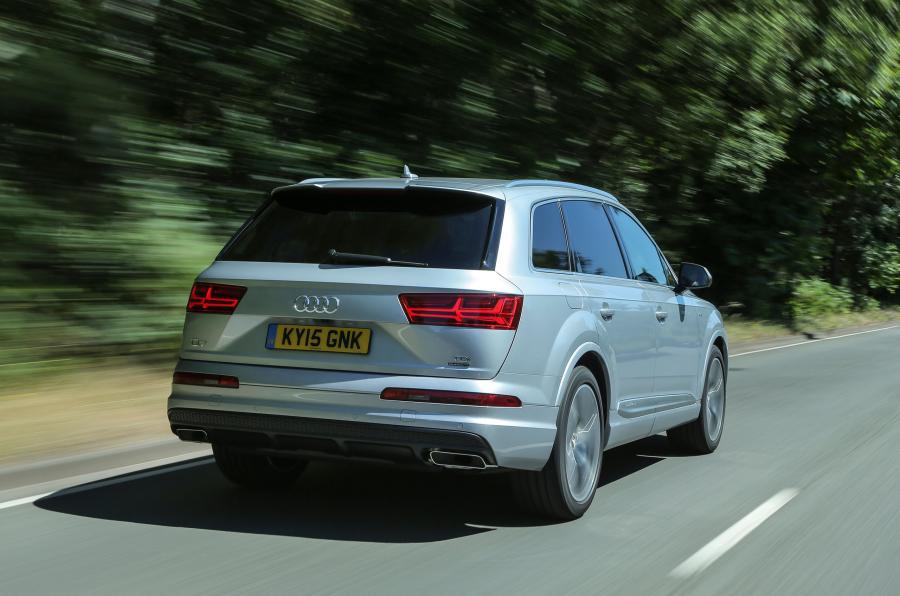 The standard suspension is a touch firm around town, so we’d recommend a car equipped with air suspension (standard on post-facelift cars) because this turns the Q7 into one of the best-riding cars around.

The Q7 is accomplished, but doesn’t feel as at home on UK roads as more refined rivals like the Range Rover Sport and BMW X5

The interior has an excellent driving position and visibility is commanding. There’s a brilliant infotainment system, at least on the earlier cars. A high-definition 8.3in screen rises from the top of the dashboard and is controlled using buttons and a simple rotary controller. However, post-facelift models switched to a fiddlier touchscreen arrangement – still good, but not as easy to operate.

There’s a healthy dose of luxury inside. It’s an impressively refined place to be and supremely well made. There’s plenty of space, too, and the two rearmost seats can easily take a couple of adults for short journeys.

Engine Check the engine runs smoothly from cold since some owners have reported misfiring until it warms up. Carbon build-up on the valves is one possible explanation. Is the NOx sensor light illuminated? It's not uncommon but should go out. It's likely to be the knock sensor and the fix is to install an updated version. When you fill up, a popping noise from the rear may be a pressurisation issue with the fuel tank as it fills. It may be accompanied by the check engine light. The problem lies with the evap or purge valve. Check for coolant leaks around the coolant pump,

Suspension Check for broken springs, not unusual on a vehicle of the Q7's weight.

Brakes Check for the Park button feeling sticky. It should free up. Some early cars had squealing brakes, resolved by a technical service bulletin (TSB). However, the noise can return.

Tyres Satisfy yourself these have plenty of life because new ones are expensive and that they're not suffering irregular wear.

Interior A rattle from the B-pillar on early cars has been noticed by some buyers, so listen for this. The front radar sensor on early models can be play up – a replacement costs around £1500. If fitted with the panoramic sunroof or moon roof, check it doesn't creak. Have an Audi dealer check for outstanding software updates.

Recalls Check all have been actioned including the one concerning the front side airbags, which only affected a few cars admittedly.

Q7 3.0 TDI 272 SE: It offers great performance, is incredibly smooth and quiet and isn’t much pricier to buy and run than the lesser-powered TDI 218 diesel. The cheaper of the two trims, SE is handsomely equipped.

SQ7: If you want a true sports SUV that will rocket down the road and cling on impressively in the bends, seek out the 429bhp SQ7. A superlative blend of comfort and speed.

Im happy with it