BACK TO ALL NEWS
Currently reading: Used car buying guide: Renaultsport Clio 197
UP NEXT
Tesla achieves best quarter on record with Q3 performance

The Greeks called them Sirens: mythical creatures that lured sailors to their deaths on rocks by warbling to them. Unfortunately there’s nothing mythical about the Renault Sport Clio 197 whose charms, not least the promise of 194bhp combined with a superb chassis, have led drivers if not to the rocks then at least to the bank.

The problem lies with the TL4 six-speed gearbox – specifically its graunchy synchros. Changing down to third, up from third to fourth… It’s a well-documented problem and far from isolated, as we found when combing the classifieds. This chap, for example, selling his 82,000-mile 2007 197: “Intermittent crunch 3rd and 4th possibly synchros.”

Another owner shared his frustration on the renaultsport.co.uk forum: “My 197 Cup has been superb other than the well-known synchro issues. Synchro in second failed, new ’box fitted. Box number two lasted 12,000 miles, synchro failure in second causing another replacement. Synchro in fourth has now failed.”

At least most sellers come clean about the issue and you can always check the ’box’s operation on the test drive. Assuming it’s okay, the rest of the car is a treat. Did we mention the suspension? That can be a little flaky too, which is a shame given how crucial to the Clio’s appeal it is. It’s a general wear and tear thing, though, and to be expected at this age. 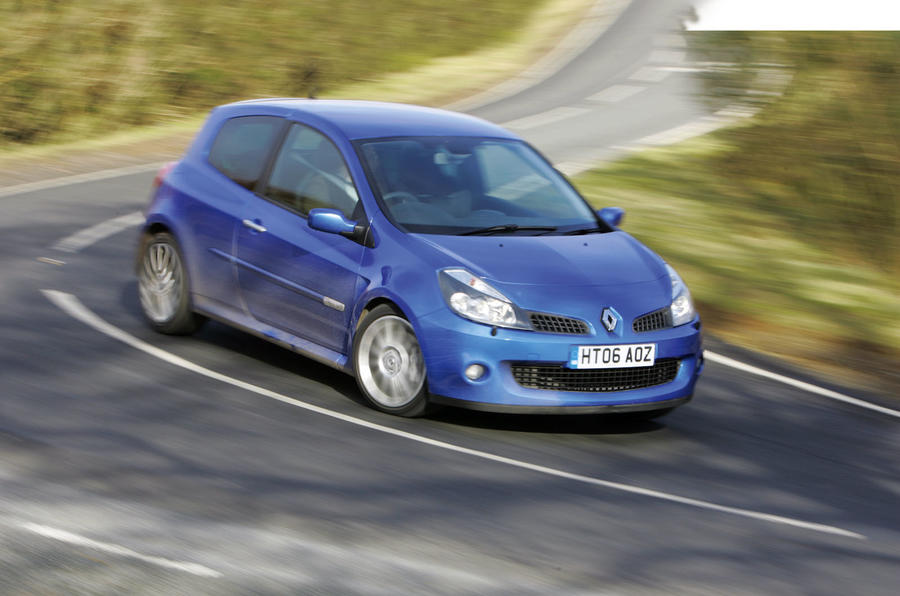 Now the good news. At launch in 2006 the Clio 197 cost just £15,995, so it’s no surprise that prices of used examples are so attractive today. In the wake of its brilliant predecessor, the 182, expectations were high. The 197 didn’t disappoint. It used a more powerful version of the same eager 2.0-litre naturally aspirated engine, which has since proved reliable with regular servicing. Standard kit included Brembo brakes, a rear diffuser and dedicated Continental tyres.

In 2007 it was joined by the more focused, cheaper and stripped-out 197 Cup, with crisper steering, a lowered chassis and stiffer springs. That same year this set-up also found its way into the F1 Team R27, a limited-edition model that celebrated Renault’s 2006 F1 success. In 2008 the TL4 gearbox got revised ratios, including a taller sixth gear.

A facelift came along in 2009, offering a nose job and improved interior, a few extra horsepower and a new name: 200 (the metric power output). It also gained a little more torque, improving pick-up. The suspension was improved further and torque steer all but eliminated, while Cup variants got an even quicker rack. More power, even sharper suspension? No prizes for guessing the 200 is the one to have. 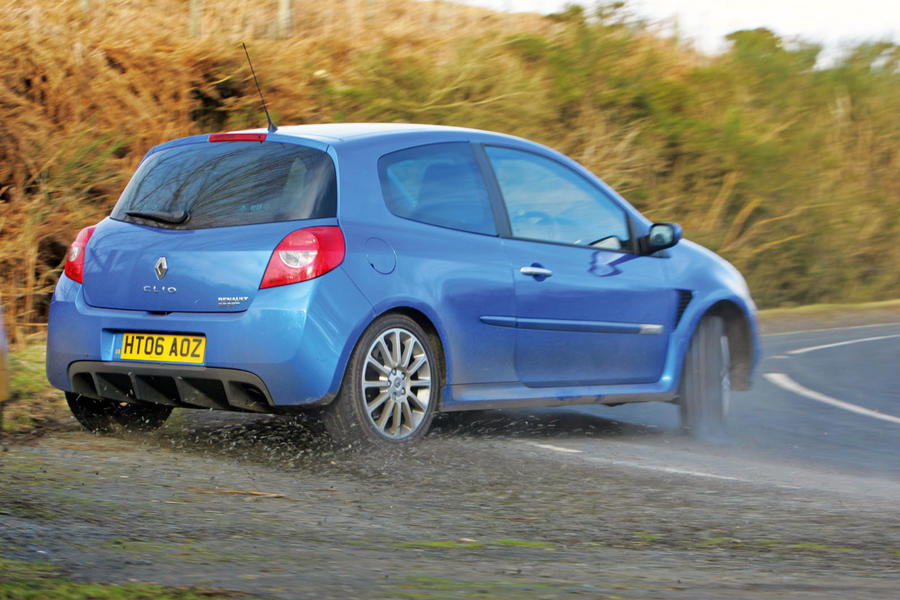 The Raider special edition, with 18in wheels and leather Recaros, led the farewell parade (a 2011 with 40k miles costs £11,000). Production ended in 2012 with the arrival of the all-new Clio RS 1.6 turbo auto, a damp squib that has only stiffened the values of late 200s.

Jane Harris: “My 197 is a 2007/07 car with 76,000 miles. It’s been fun although it’s for sale now, for £2995. It’s not exactly comfortable over bumps but it’s really nimble. The gearbox had to be refurbished – it had eaten the selector ring – and I got little change out of £900. The electric windows packed up too. It’s a common fault caused by blocked windscreen drain holes. Otherwise the car is very reliable, although it’s very thirsty – high-20s typically.”

Engine: Cambelt (and water pump) must be changed every five years or 72,000 miles. Oil changes are every 12,000. Engines are strong so walk away from any that leak or rattle. Expect a 197 in to ‘kangaroo’ from cold (a remap may sort it). Super-unleaded fuel is best. 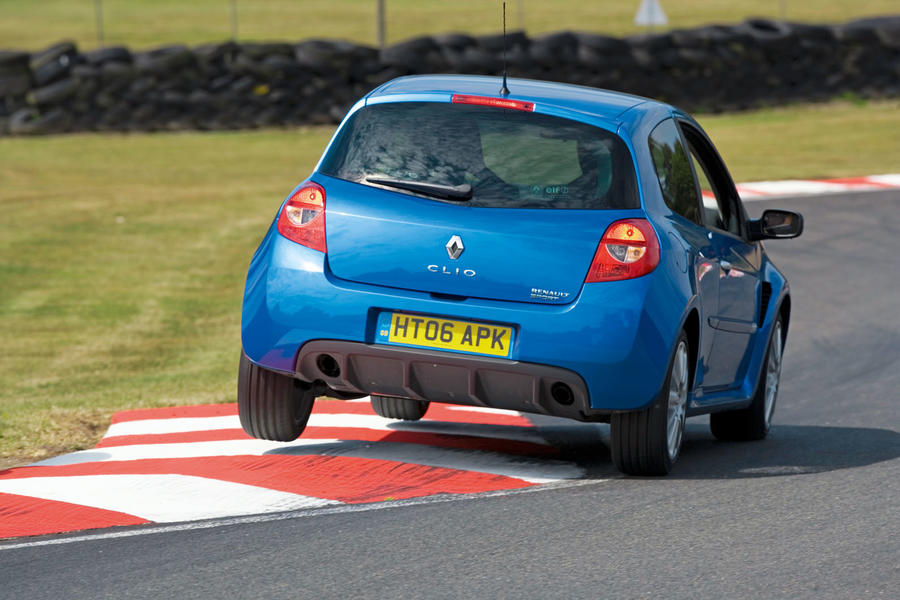 Gearbox: Early 197s suffered rapid synchro wear on third and fourth gears; second can also be a problem. It’ll feel notchy when cold but may ease up as the temperature rises.

Chassis and body: Inspect the rear subframe and, at the front, the radiator support, both for heavy rusting. Scrutinise panel gaps for signs of panel replacement and paint for overspray. Check the headlights work – replacing a bulb is a bumper-off job. 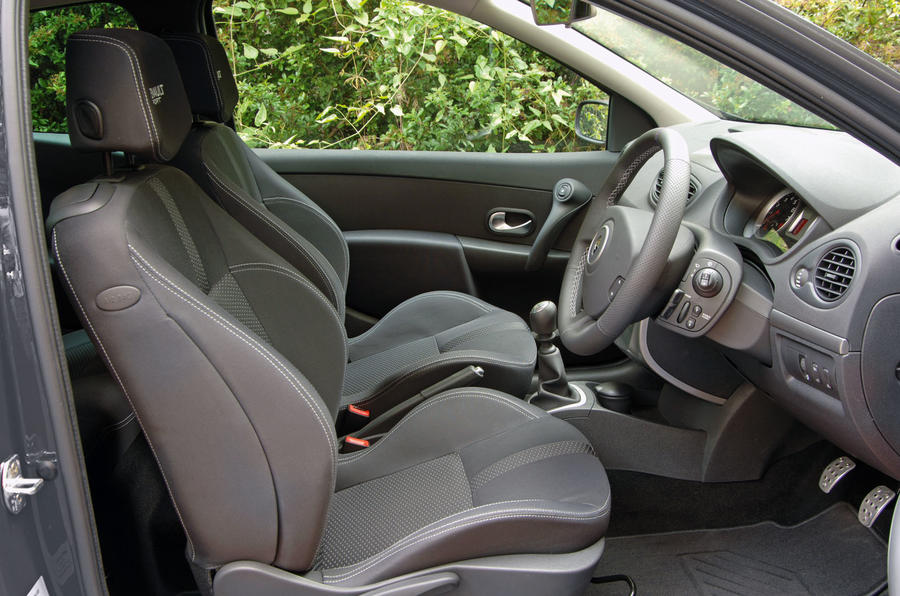 Interior: Expect the driver’s seat bolsters to be worn, the gearlever to have faded and the steering wheel to be peeling. Rattling trim is standard, at least on 197s; 200s feel better built.

The 197 and 200 played the special edition card many times. In addition to the runout Raider there’s the 197 Lux of 2008 (special alloys, leather seats) and the later Gordini (includes special blue paint) and Silverstone (silver with a black roof – a 2011 with 60k miles is £6500). All are nice but in every case a healthy gearbox comes first. 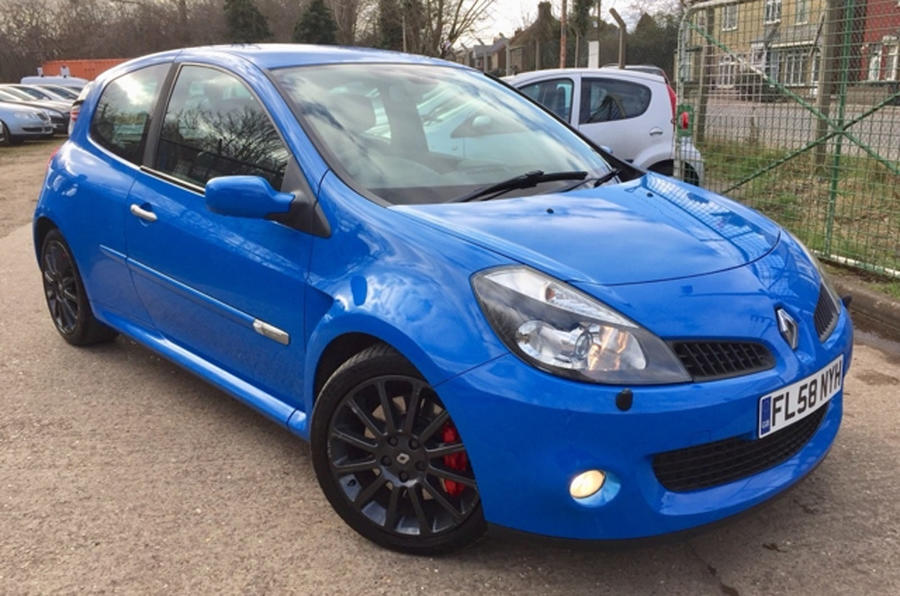 Renaultsport Clio 197, 2008/58, 65K miles, £3990: A strong colour, a fat workshop file and water pump and timing belt changed at 43,000 miles are standout features here. However, there are plenty of 197s at this money, so check out and try as many as you can before committing.

Life with a used Renaultsport Clio 182​

Used to own a 197, i had it from a year old for 3 years, never missed a beat, was a brilliant fun car, MPG was appalling though and the reason i sold it in the end, just couldnt get it over 25 mpg unless i was on a run, have had 2 Golf GTI's and an R since, and although much faster in a straight line, none of them would have kept up with the Clio round the twists! Always had a smile on my face driving the blue bullet!