Datsun went a long way towards improving its image in 1969 with a gratifying sports coupé, and it remains affordable – for now
Share
Open gallery
Close
Share story

With a Lotus-inspired suspension set-up, baby Jaguar E-Type styling and a 0-60mph time of just 8.0sec, the Datsun 240Z had pretty much everything going for it, so it was no surprise that it quickly became one of the most acclaimed and popular sports cars of its time.

With its 2.4-litre (hence the name) straight-six engine sending 150bhp to its rear axle and a kerb weight of little more than a tonne, the 240Z was aimed squarely at accessible sports cars like the MGB and Lancia Fulvia Coupé, but it was so comparatively well built, modern and quick that it gained a much more widespread global following. That legacy is still strong today, and it’s the success of the 240Z and its successors (running right through to today’s 370Z) that make us especially sad that we won’t receive the new 400Z in the UK.

Let’s not mope, though. There are 240Zs aplenty to pick from, and with prices hovering around the mid-£20,000s for a clean, unmodified example, you can get your old-school sports car fix for a fraction of what you would have to pay for the more prestigious E-Type or the ultra-rare Toyota 2000GT.

You can even buy a new one. Well, sort of: MZR Roadsports’ take on the little Datsun is rather more refined than even the cleanest standard examples. The Bradford firm’s restoration process has each car stripped down to bare metal and rebuilt with modern sound-deadening measures, strengthened chassis components and uprated motors but, crucially, leaves it almost identical to the original 240Z. It’s a lovely way to spend £90,000, but an untouched original car is best if you’re on a budget. 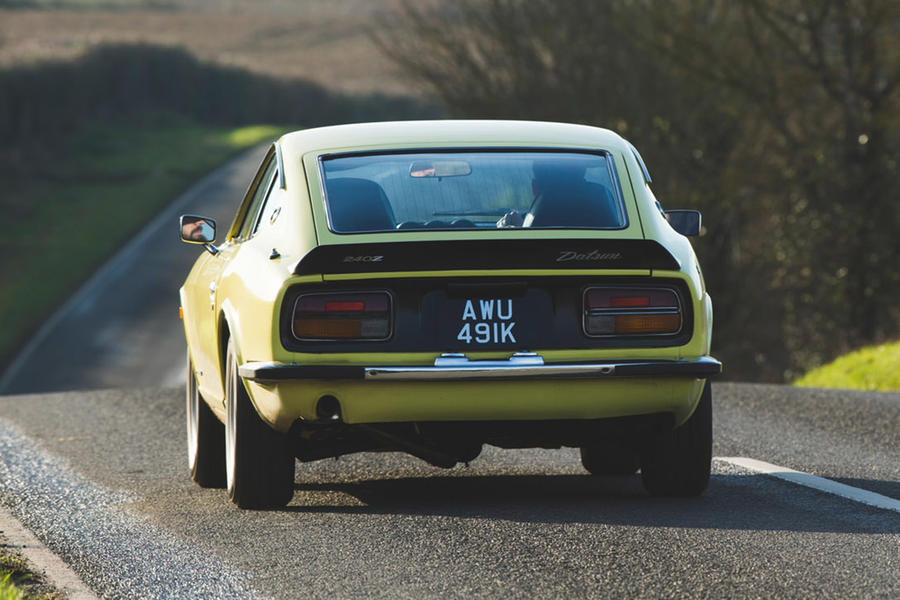 You would be wise to value structural integrity over provenance. The British climate especially hasn’t been kind to the rust-prone 240Z, and what looks like a cheap car can quickly spiral into a money pit with no hope of recuperating your outlay. American imports, mainly from California, are therefore very popular, but shipping fees and import taxes will usually negate any saving you make on repairs, so buy one here and let someone else do the legwork.

Once you’ve decided your budget, making a decision is as simple as verifying a car’s mileage, checking the calibre of any work carried out, getting a quote for any jobs that are outstanding and hitting the road.

And that’s exactly what you should do with a 240Z, at least while values are still just on the right side of realistic. That straight six is revered for its eagerness and durability and, with a properly sorted driveline and chassis, the 240Z can hold its own on any B-road against much more modern equivalents. 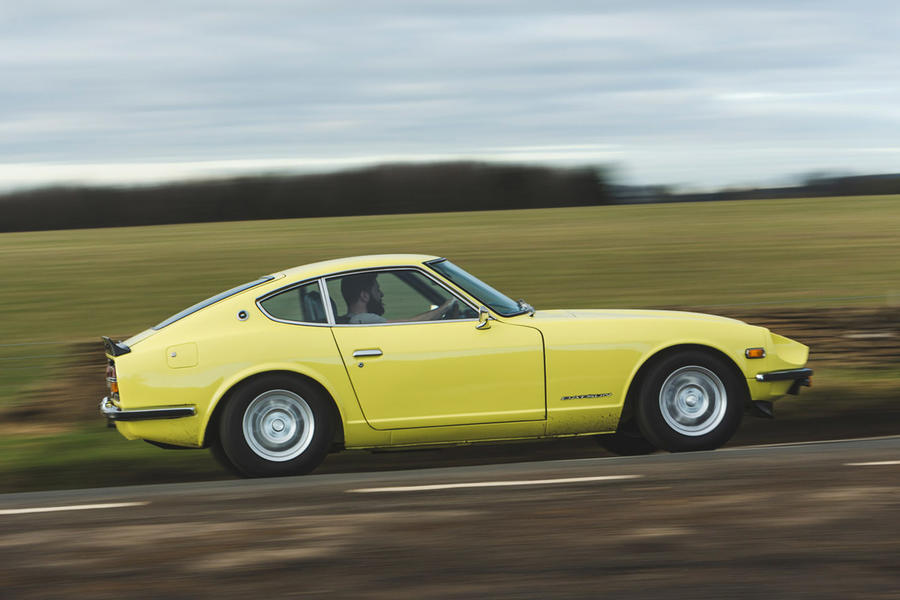 Duncan Pearcey, The Z Farm: “There are now very few genuinely restorable right-hand-drive examples, because 45 years of British winters have ravaged bodies to such an extent that most are beyond redemption. We tend to use them as donors and bring in US cars from dry states, such as California and Arizona. Ten years ago, I was buying decent right-hand-drive cars for £7000-£9000 and making a bit of profit. Now those cars cost three times that. Importing also has its risks. Every so often you find a gem, but by the time you’ve got it here, with shipping and duty, any half-decent car costs £15,000-£20,000.”

■ Bodywork: The 240Z is a good-looking car from any angle, but kerb appeal is all too often spoiled by the gradual onset of crippling corrosion. Weak spots include (but aren’t limited to) the battery tray, lower front wings, spare wheel well, bootlid surround and floorpan. This may sound strange, but take a magnet to the viewing: it’s the only way to be sure the paint isn’t hiding acres of filler. Some reproduction panels are sold by specialists, including The Z Farm, but others need to be shipped from the US.

■ Engine: The straight six is easy to tune, but performance add-ons can place stress on original components, so it’s best to carry out certain upgrades as part of a package. Hesitant throttle response, misfiring or lumpy idling could be a sign that one or both of the carburettors are running lean. A scarily low oil pressure reading can usually be traced back to a dodgy sensor, while a stiff engine fan can be solved with a bit of lubricant - although replacement with a new electronic item is a better bet. 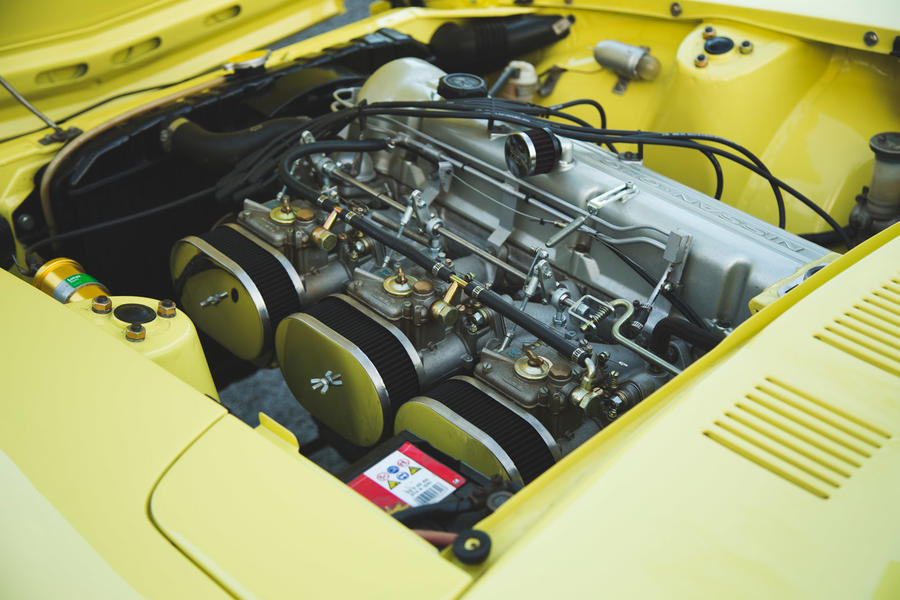 ■ Electrics: To check the health of the distributor – a common weakness – suck the end of the vacuum-advance hose and ensure the internal plate rotates smoothly and snaps back into place. Reluctance to turn over with the key could be the fault of the starter solenoid, but try replacing the more accessible and cheaper ignition switch in the steering column first. Oxidised connections can cause fuses to blow; The Z Store’s upgraded fusebox is a plug-and-play solution for around £155 plus shipping.

■ Gearbox: UK cars had a five-speed gearbox, but an import will more likely make do with four. Both are robust, but check for crunchiness shifting into second and fifth – the sign of worn synchros – and listen for any indication the bearings are on their way out. A whining noise from the rear is likely to be the differential and not really worth worrying about if it’s not deteriorating.

£5000-£9999: Intimidating restorations and parts cars hold up the bottom of the market. Get friendly with a professional welder… 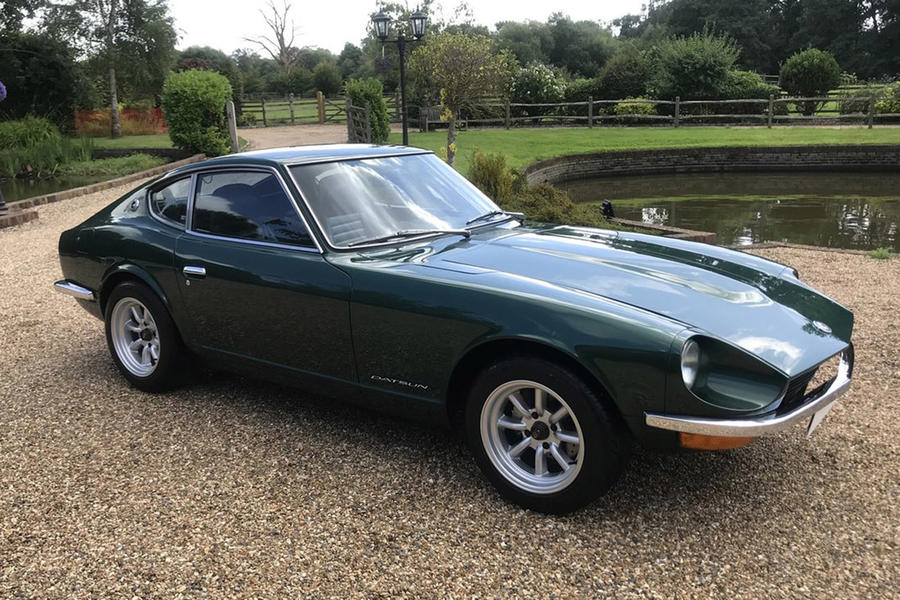 Datsun 240Z, 1972, 4202 miles, £35,000: Having covered just over 4000 miles since it was completely rebuilt by MZR, this is essentially a new car. Its engine, brakes and five-speed gearbox have been overhauled and upgraded, power steering has been fitted and you could eat your dinner off its chassis. Cast aside your purist tendencies and enjoy.

Matt Prior: No Nissan Z Proto is one way to encourage EV adoption

Would the later Nissan 260Z and it's 2+2 version be a cheaper path to Z car ownership?

Such stunning looking cars, not really what I'd call affordable though, if you want an affordable sports coupe try a Porsche 924, the 2.0 cars aren't particularly quick but are a great drive and the later S models with the 2.5 Porsche engine are quicker and just as great to drive, rust will be less of an issue and they are available in good and useable condition for under £10k, that's what I'd consider affordable.

I saw the restomod Z cars at the classic car show a few years back, they looked stunning, and if I could afford I would love one as all the rust concerns have been eliminated.