This could be your family’s new best friend, from £15k up. We have the info
Share
Open gallery
Close
Share story

What’s in a name? We all loved the Yeti, even though it looked insane and had an odd moniker. The Karoq’s name is odd, too, but the car beneath the badge is entirely and in some instances delightfully conventional. Larger than the Yeti both inside and out, the Karoq was created with practicality as its main brief – so it retained the smart touches and versatility that made its predecessor so popular, if not that standout styling.

Click here to buy your next used Karoq from Autocar

To drive, the Karoq is a very pleasant thing. It isn’t quite as sharp in the handling department as the Seat Ateca, with which it shares a platform, but it’s tidier and more agile than its other platform mate, the Volkswagen Tiguan. It comes up trumps for comfort, with a well-judged ride that smooths off all but the harshest bumps in town and is delightfully plush at higher speeds. 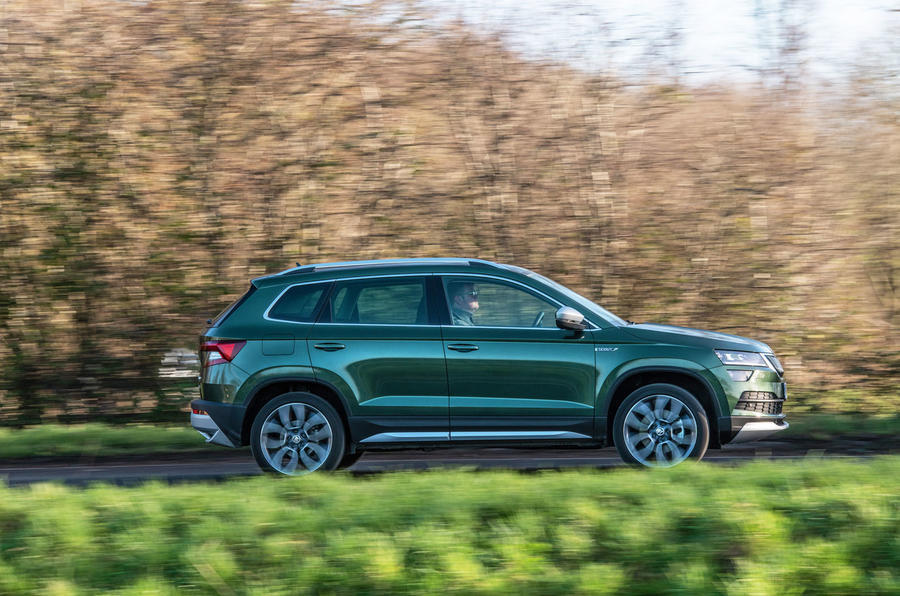 The Karoq’s greatest asset, however, is its interior. It’s smart and beautifully built, and there’s loads of room for driver and front passenger, and an excellent driving position.

The car’s appeal remains strong as you go further back in it because the rear doors open nice and wide and the rear bench is pretty spacious. If you choose an SE L or Edition, you get a fantastically useful 40/20/40-split folding rear seat – or the option to remove the rear seats entirely to maximise boot space. This system was also available as part of the VarioFlex package on SE and SE Technology models.

The boot isn’t the biggest in the class, but it is very well shaped, which means you can carry a useful amount in it. And if you don’t choose a car with the VarioFlex seating, your consolation prize is an adjustable boot floor with a hidden space beneath the cover for smaller items.

It’s possible that a small number of Karoqs built in February 2019 have a cracked left front seat frame. A Skoda dealer will be able to inspect your seat and replace the frame if necessary.

There have been two recalls for the rear head restraints in the Karoq. Your local dealer can tell you if your car needs to have any recall work carried out.

Karoq 1.5 TSI 150 SE: We love the pace, refinement and efficiency of the 1.5 petrol and there’s a good choice of used ones. Entry-level SE is well equipped, but seek out a car that has the VarioFlex seating option.

Karoq 2.0 TSI 190 Sport Line 4x4 DSG: With stylish 19in alloy wheels, Sport Line is near the top of the tree, and paired with the rare and more powerful petrol 2.0 and an auto ’box, it’s a bit of a peach.

Might want to check any 1.5TSi doesn't have the kangaroo problem, whether cold engine or warm. Skoda's fix to affected cars wasn't always much of a fix. I have a 'fixed' Octavia which still does it.