For the launch of the SLC two-seater in 2016, Mercedes invited the world’s motoring press to the south of France. It was the perfect setting for the model, because here, the sun can be replaced by storm clouds in an instant.

Fortunately, when that happens, the SLC driver simply presses a button and the car’s folding hard top turns it from convertible to coupé in seconds. With the exception of the Mazda RF and new previous-generation BMW 4 Series cabriolet, its metal roof is the one feature that distinguishes the SLC and its forebear, the SLK, from rivals.

Forebear? Despite its no-expense-spared launch, the SLC was a facelifted version of the third-generation SLK launched in 2011. Actually, that’s not fair since the changes ran to new engines and gearboxes and retuned suspension, as well as a mildly refreshed interior and exterior. Autocar awarded the most powerful version, the SLC 43, a moderate 3.5 stars. We praised its competitive price, improved handling and steering, and its year-round usability but criticised its lacklustre V6 engine, performance-sapping weight and clunky ride. They were judgements that could equally well be applied to the less powerful four-cylinder models, although Sport trim versions do at least have softer and more forgiving suspension.

When our review was written, the line-up comprised 181bhp SLC 200, 201bhp SLC 250d and 242bhp SLC 300 variants (all with four-cylinder engines) plus the aforementioned Mercedes-AMG SLC 43, powered by a twin-turbo 3.0-litre V6 producing 362bhp. Notice that 250d? It looks like a mistake but, in fact, the diesel was very popular, proving that even rich folk like the idea of 70mpg fuel economy or, more likely, reduced car tax. The downside is the 2.1-litre engine’s below-par refinement. You can pick up a low-mileage 2016-reg example for £14,000. 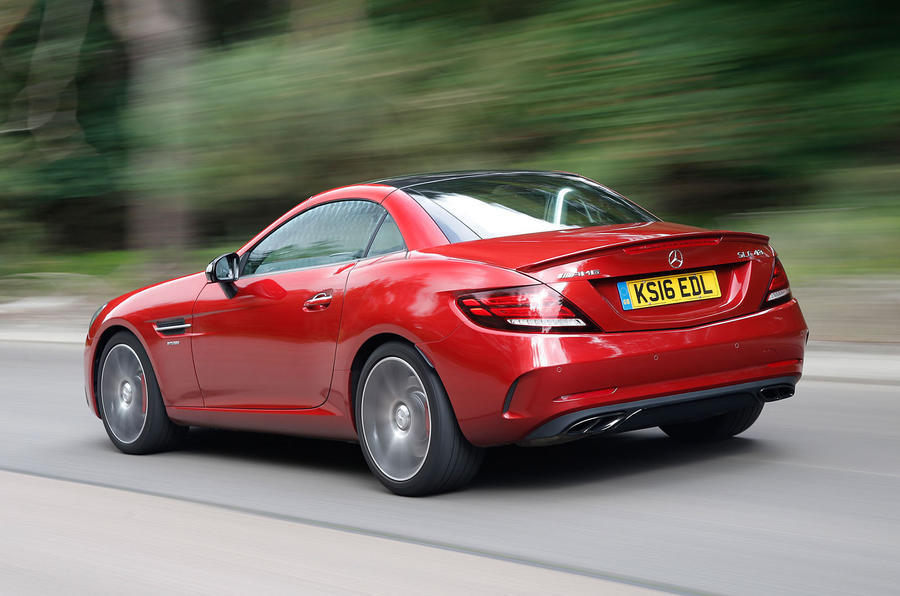 A few months into the SLC’s life, the entry-level SLC 180 arrived. Powered by a 1.6-litre turbo petrol engine producing 154bhp, it plays to the SLC’s strengths as an undemanding and laid-back cruiser with a quality badge. Prices typically start at around £17,000 for a 2017-reg. Perhaps to mask its underwhelming performance, it came in only AMG Line trim, one that all SLCs adopted from 2017.

Check if the car you’re interested in buying has the optional Airscarf neck warmer. SLC 180 and 200 models have manual transmission as standard. From 2017, AMG Line became the only available trim. In hard cornering, expect the roof and glass to creak as the chassis moves. Check you’re happy with the rearward view when the roof is in place. Ensure all electrical features work correctly because problems with the sat-nav and minor controls are not unknown. Batches of cars built in 2017 and 2018 were the subject of recalls. Check they have been actioned. 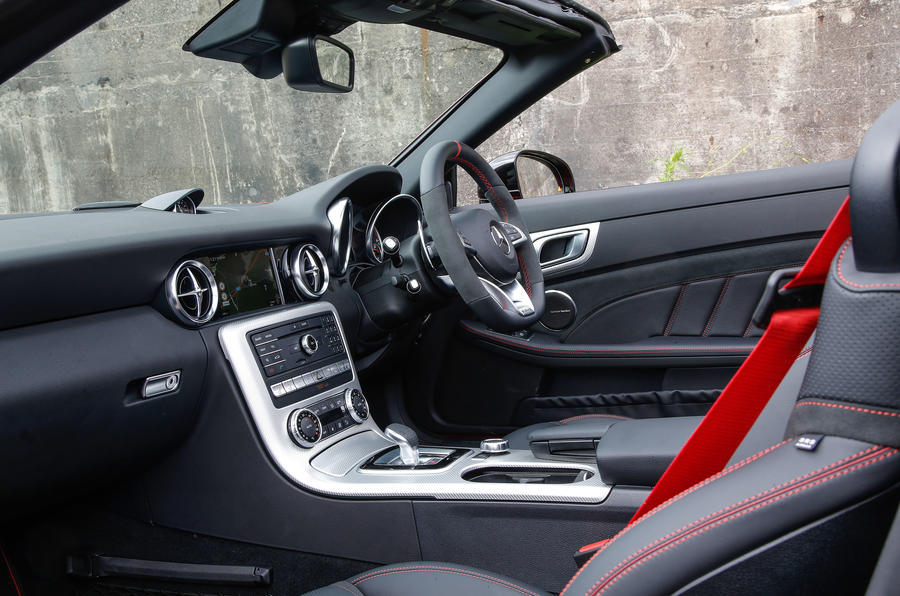 Mercedes-Benz SLC 200: This and the 250d are the most plentiful versions but we favour the 200 for its sweeter engine, a moderately powerful unit that suits the laid-back SLC to a T.

Mercedes-Benz SLC 43: In the context of the SLC range, the 43 is the wild one, no question. However, choosing it in preference to rivals such as the Porsche 718 Boxster would be pretty wild, too.

Mate with a Z, xxxx? Everything in the boot crushed? Nonsense. There's a load cover and the roof can only be lowered when the cover is engaged. If stuff below it is getting crushed then your mate is crap at loading under a cover they know needs to be in place. Had mine from new and had plenty of trips out, to the beach and other places, and driven there, and back, roof down. Boot is plenty big enough. Sure you have to put it back up to usefully access the boot but I put the roof up when leaving the car, anyway, and only a real idiot, or an imaginary mate, would buy a car without considering such matters as a part of their purchase.

Folding roof practical, never. Mate had a bmw z with folding roof soon as you put the roof down everything and I mean everything in the boot was crushed. No trips to beach etc with roof down are possible, dumb half way house invention.

abkq 6 May 2021
The rise and fall of the SLK (or of the hard top convertible)
The reason (excuse) given was added weight, and that's when everybody is buying big and heavy SUVs
Incredible that such a practical solution has been ditched when the totally pointless SUV coupes go from strenght to strength.