This is a £3k drive-away fun Porsche – if you’re feeling brave enough and know what to look for. We give you the lowdown on buying the original Boxster
Close
by Autocar
Follow @@autocar

The latest chapter in the Porsche Boxster’s story will be written next month when the first examples of the new 180mph 718 GTS land in showrooms.

Putting the 550 Spyder of 1953 to one side, it’s a story that began in 1996 with the launch of the 986-series Boxster. The model, which shared many of its components with the 996-series 911, was powered by a mid-mounted 2.5-litre flat six producing 201bhp, driving the rear wheels through a choice of five-speed manual or five-speed Tiptronic automatic gearboxes.

Three generations later, today’s 718 boasts a lustier 292bhp from its 2.0-litre turbocharged four, and the new 718 GTS will develop rather more. But guess what? It and the standard 718 cost considerably more than £3000, the price at which Boxster 986 ownership now starts. 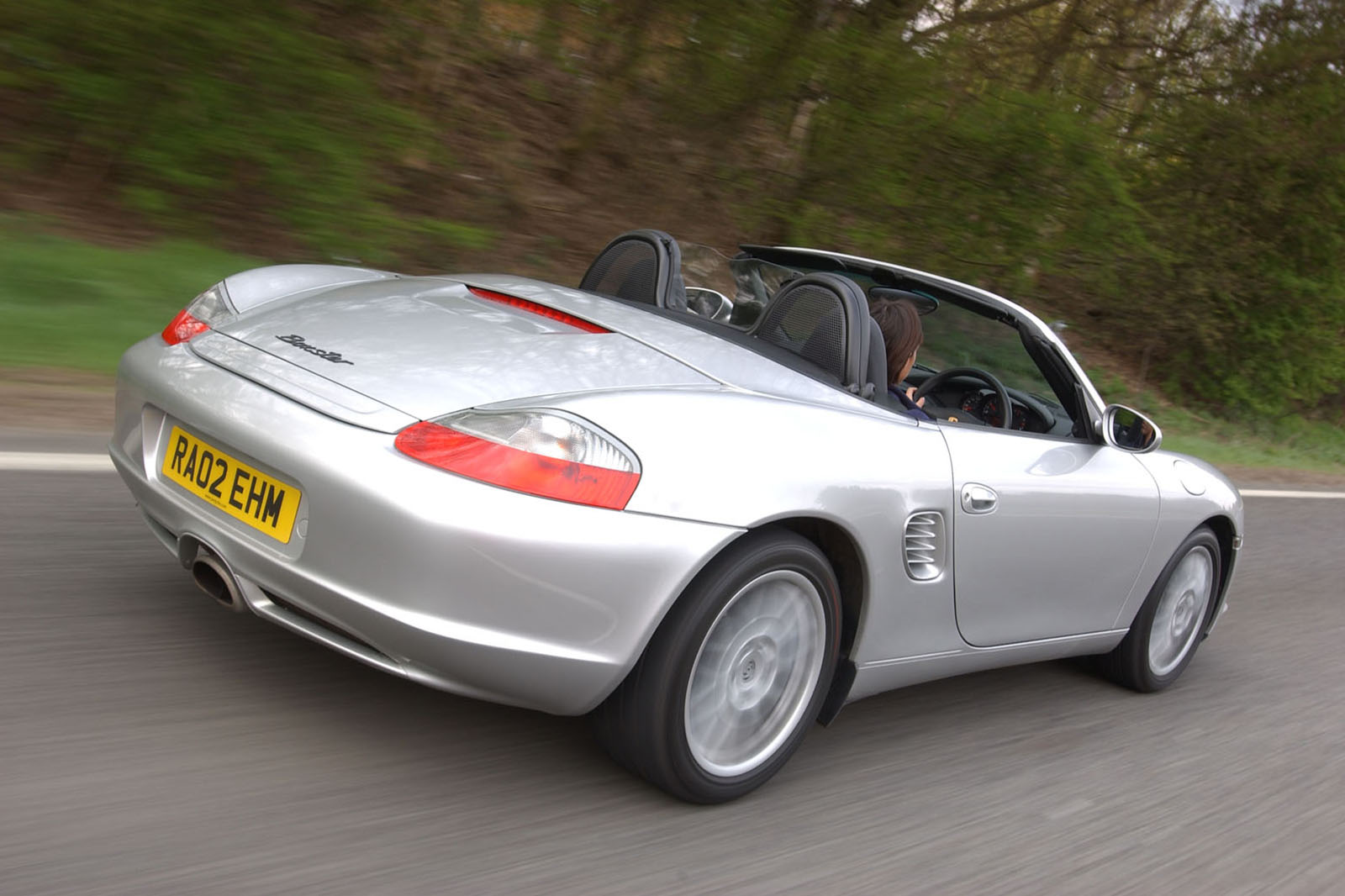 In 1999, the model’s original 2.5-litre engine gave way to a 2.7 producing 217bhp. At the same time, the more focused Boxster S entered the fray, powered by a 3.2-litre flat six making 249bhp, sufficient for 0-62mph in 5.9sec, and with a six- speed manual gearbox or the existing five-speed Tiptronic. Today, prices for the S start at around £4750.

This version had a double-skin roof, a feature that was saved for the standard car the following year. Both models got Porsche’s side-impact protection system (POSIP) too.

The addition of Motronic engine management and VarioCam (variable camshaft) technology in 2003 helped to raise the performance of the standard Boxster 2.7 to 225bhp and of the S to 256bhp. In addition, a minor facelift ushered in a glass rear window. These 2003/53-reg cars are considered the best. In 2004, with the replacement 987-series Boxster approaching, a 261bhp limited-run S-based version called the Anniversary was launched. 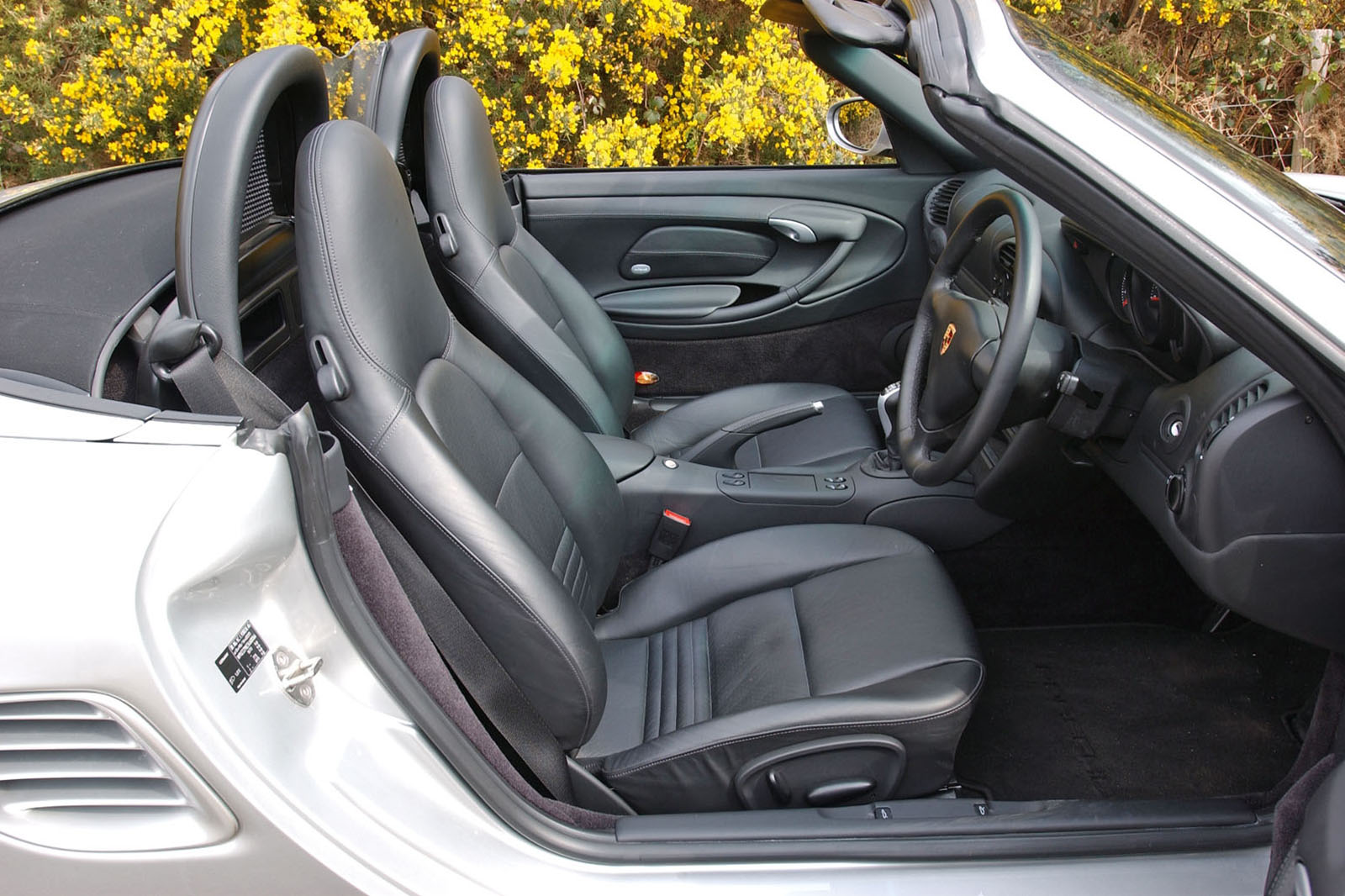 So, eight years, three engines and six power outputs: that lot should keep you busy but there are a few abbreviations and cautionary tales to take on board when considering a used Boxster 986 too. In particular, we’re talking RMS (rear main oil seal) and IMS (intermediate shaft) bearing. As ‘Buyer beware’ explains opposite, RMS trouble can affect all 986-series Boxsters. The part is cheap but it’s the labour that costs since the gearbox must be removed. As for the IMS bearing, again see ‘Buyer beware’ but, in short, post- 2000 cars with a single-row bearing are more prone to failure than earlier cars with a dual-row. Boxsters with a new RMS and IMS bearing fetch a premium – cars like a tasty 2002- reg 3.2 S with 84,000 miles and a ‘comprehensive service history’ that caught our eye. It had the work done in 2011 and costs £8000.

Then there’s cracked bore liners, porous engine blocks... We could go on but the best advice is to insist on a full service history and avoid low- milers that have stood idle. Grab a good manual Boxster S for around £7000 and you won’t look quite so enviously at that 718 GTS.

“I reckon you can’t buy another sports car for £7000 that’ll give you so much pleasure, although keep a couple of grand in your pocket for refurbishment. Once you’ve driven one, you’ll be hooked. Biggest concern? The intermediate shaft bearing. If it’s noisy, walk away. Our focus is servicing Porsches. It doesn’t do to mix sales and servicing. That said, if we’re offered something we know, we’ll have a go. The other week, a customer offered us his 2001 2.7 with 56,000 miles. We’ve looked after it for the past three years and it has a full history. We’ll advertise it for £7500 with a 12-month warranty.” 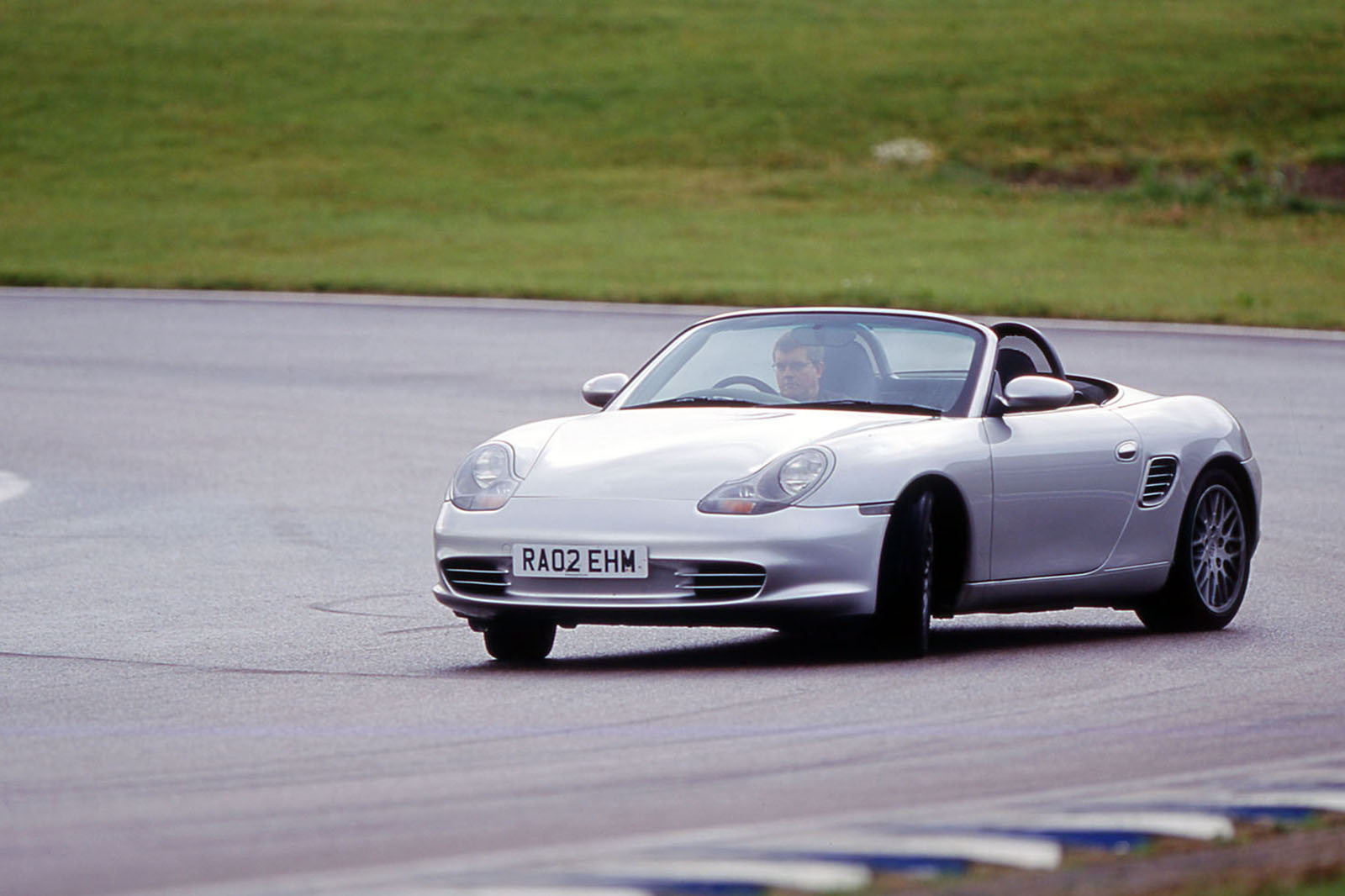 ENGINE - On a pre-2001 car, emulsified oil could indicate cracked bore liners. Have a specialist do a bore scope check. Pre-2002 cars especially can suffer worn chain guides on the VarioCam timing chain tensioner. Debris gets into the engine oil so missed oil changes can lead to accelerated engine wear.Bearing noises on a post-2000 car at the rear of the engine could indicate failure of the intermediate shaft bearing (IMS). At all ages, an oil leak on the engine’s underside could indicate a failing rear main oil seal (RMS). Engine misfires or rough running could be cracked ignition packs. Hesitation under acceleration could be the mass airflow (MAF) sensor. Check the coolant expansion bottle isn’t cracked and look for oil smoke that suggests the oil separator is packing up. Ensure radiators aren’t clogged with muck.

TRANSMISSION - Check for a stiff change from first to second gears, and if it pops out of second. The clutch should be light. Heavy indicates trouble.

SUSPENSION, WHEELS AND BRAKES - Check service receipts for the quality of pads and discs. Lower arm bushes fail at around 40k miles, so listen for knocking from the rose-joints on the trailing arms where they contact the body. Listen for worn rear wheel bearings too. Tyres should be N-rated. 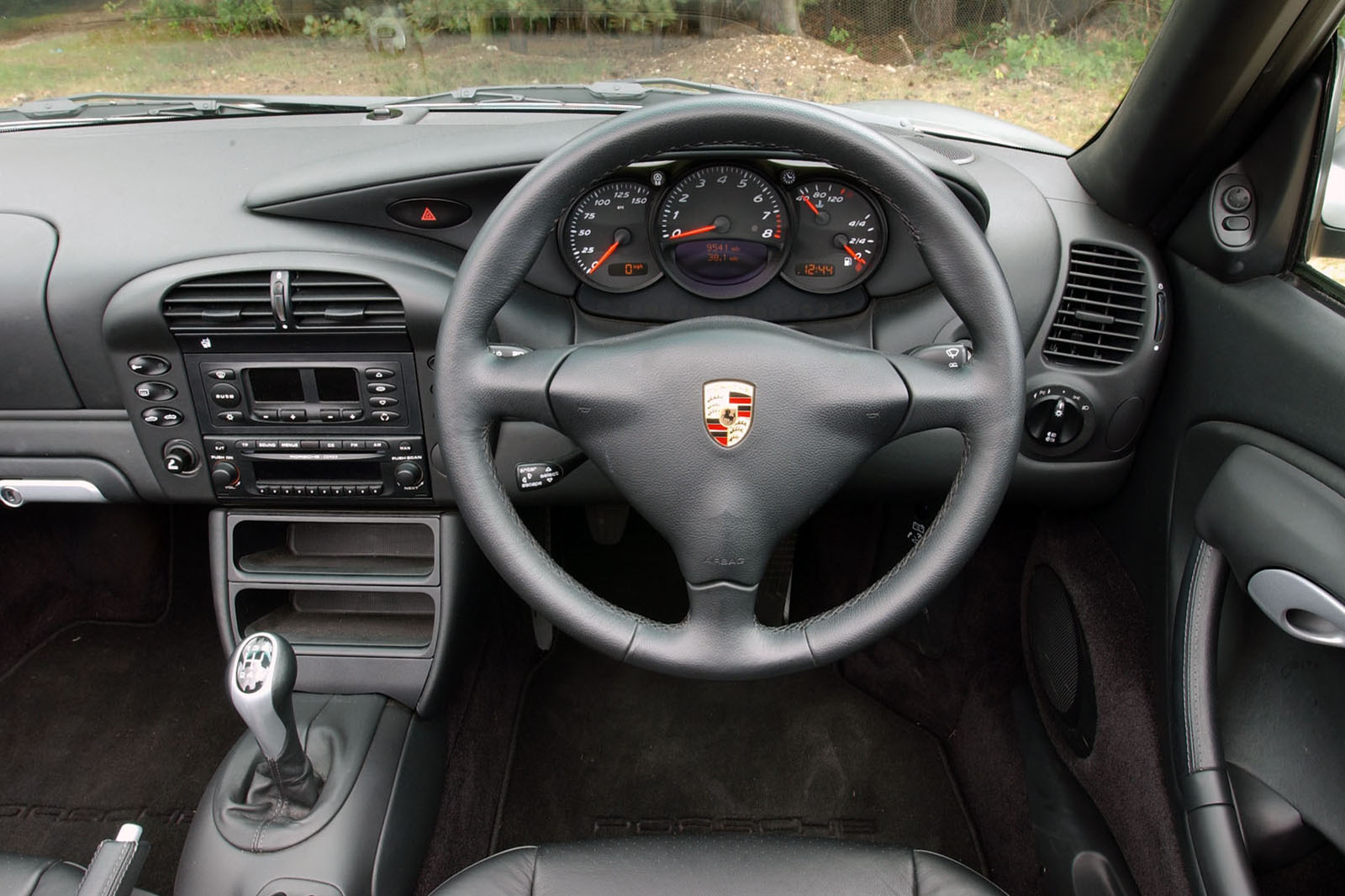 BODY - Look for water behind the seats caused by blocked roof drains. Check the hood works smoothly. Rust is unknown unless caused by poor accident repair.

Also worth knowing IMS (see ‘Engine’) is a term any 986 owner quickly learns to fear. Relatively few cars suffered failure of the IMS, but if it does let go, the engine will be destroyed. One preventative solution is to fit a stronger, ceramic bearing during the clutch change. See imsretrofit.com. 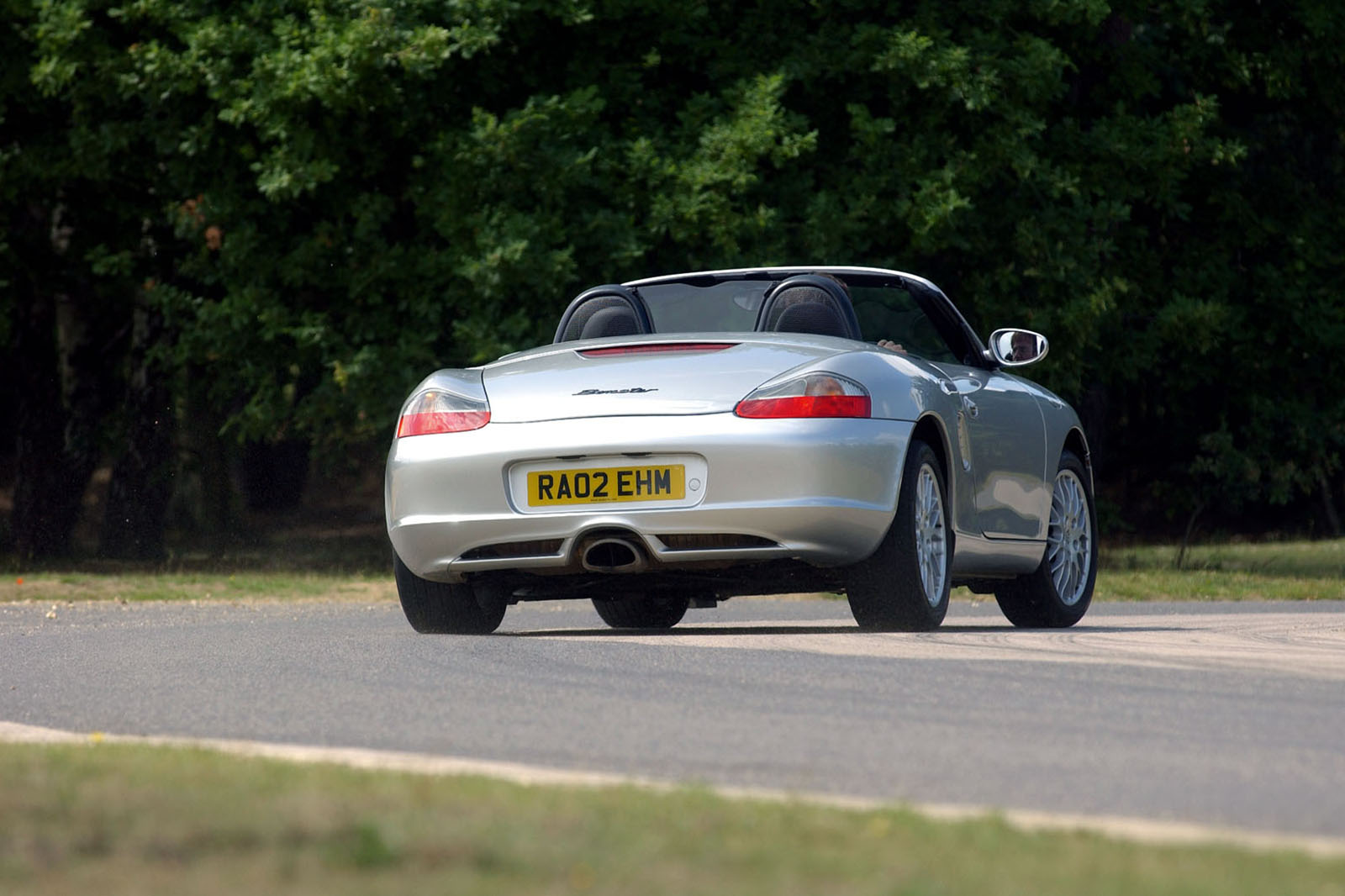 22 December 2017
Always found the Boxster soulless, we had one from 98 - 2000. Great car but it never gave you that feeling. likened it to the white goods of the sports car world.

Great car but at a price

I got a 1999 Porsche Boxter 2.7 in June and ok its a fantastic car but  please be aware if they go wrong or need new parts then boy will you have a shock!

I would recommend joining the Porsche GB Club who are very helpful.

So, £7,000 buys you a starting point,still going to cost to run one and keep it fettled till you move it on usually when the BIG bill appears on the Horizon, I suppose if your a certain age and less dependants you could afford to run one for a Summer maybe no longer though, did it with my mid life crisis, ran an M3 for six months, all it cost me were two Tyres and managed to avoid services too!, so, if you’ve got the spondulicks...why not!?, MERRY XMAS everyone....!

It was never out the garage for more than a few weeks. Lasted 3 months before it died on me 300 miles from home. Cooling fans failed, water pump failed, thermostat broke, oil pump broke on top of many other things.

Ended up needing a new engine and I decided I didn't need the bother and just sold it as a non-runner. It's not special enough to justify the money I was spending on it.

My brother bought a second

My brother bought a second hand Boxster S for £3,500.  On the whole it is a pretty good car, however he has had had to do lots of jobs on it.  He does vrtually all the work himself, and I wouldn't recommend buying one of these unless you can do the same.  He had a tool 3D printed to help replace the oil seal on the crank which is also a gearbox out job, and apparently is common fault and would be ruinously expensive if you paid somebody to do it.

I believe the 996 shared many

22 December 2017
I believe the 996 shared many of it's components with the Boxster, as it came first? I had a new S and was on a 18mth waiting list, when people started buying them from Europe direct. Suddenly I was on a 3 month list and 2 weeks after taking delivery, Porsche GB cut the list price by around £10k, thanks Porsche GB. That left a bad taste and the car wasn't as good as my old 993, so off it went and I got a 996. The purists at the time said it was a girls car and was a poor mans Porsche and I think they were right.