Nothing turns up the heat on an old Focus RS like the arrival of a new one. Comparisons are drawn from which, fortunately, the Mk2 of 2009-2011 emerges head held high.

It has an involving front-wheel drive chassis, big reserves of tweakable power and – important, this – three doors, not five. If you’ve just spent £23,000 acquiring one, take a bow.

The Focus RS Mk2 hit showrooms in 2009, with 301bhp and 325lb ft from a comprehensively reworked version of the Focus ST’s 2.5-litre five-cylinder turbo engine. It was no modern-day all-wheel driver; the Mk2 sent its power through the front wheels, reducing unruly torque steer with the aid of a Ford’s so-called RevoKnuckle front suspension set-up plus a Quaife limited-slip diff and ESP. The extra control contributed to a 0-62mph time of 5.9sec (you can improve slightly on that by fitting a stiffer torque mount that restricts engine movement, helping to keep the front down). Top speed was 163mph. Just as important, the engine sounded glorious, popping, banging and generally showing off when it wasn’t simply bumbling to the shops just like any other Focus. 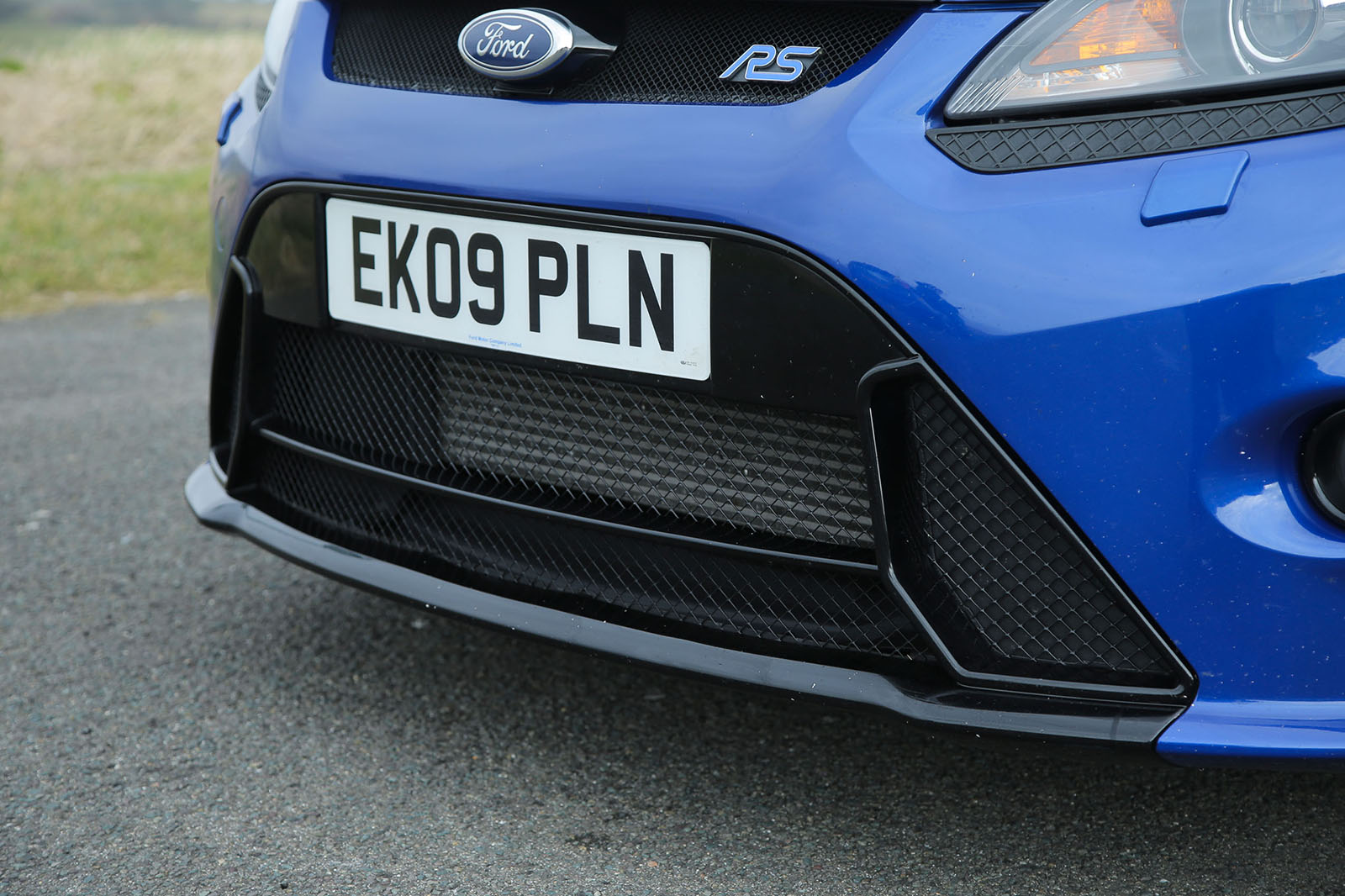 But Ford couldn’t resist another throw of the dice, so in April 2010, emboldened by the RS’s success, it gave us the RS500. No, not a reference to its power output (it made 345bhp) but the number the company made. Along with an engine remap, it had an uprated fuel pump and a larger intercooler and exhaust downpipe. It cracked 0-62mph in 5.6sec and you could have it in any colour you liked, as long as it was black – matt black. It cost £35,450, or around £4000 less – yes, less – than they change hands for today.

Meantime, word had spread about how well engineered the standard RS was and how it could easily handle a few extra horses. Step forward the expert tuners, including Graham Goode Racing and Mountune, offering upgrades ranging from 340bhp to 400bhp. All very nice, but just netting a straight and cherished RS, whatever its state of tune, will be the gift that keeps on giving.

“The RS is reliable but thrives on expert servicing. Main dealers are great, but consider a specialist for the ultimate care. Like RS owners, they’re enthusiasts, and they also understand the tuning scene — what’s possible and what isn’t. Driveability, as well as reliability, is the hallmark of a good modification. Anyone can squeeze a few extra horsepower out of a turbo, but the key is knowing how to upgrade the fuelling, induction and exhaust. Some sellers swear their car has been modified by an expert. Ask to see invoices for proof; there could be problems waiting in the wings.”

Rust isn’t an issue yet, but check the quality of any repairs, especially behind plastic trims where corrosion may lurk. Some cars have severe stone chips and mild rusting of wheel arches.

Engines are strong but need regular TLC. Check it’s had Castrol Longtec 0W-40 fully synthetic oil. Backfiring caused the plenum chamber to explode on a handful of early cars. A remap cured this. Oil leaks include from a bung in the oil feed to the variable valve timing apparatus. The diaphragm in the combined oil filter/breather can split, causing a build-up of crankcase pressure. This can pop out oil seals, risking timing belt contamination and failure. To check, remove the dipstick with the engine idling and listen for the hiss of escaping air. Also listen for a ‘mooing’ sound.

It’s tough, but aggressive starts can eat clutches and driveshafts.

Bushes can wear but main components are durable. Tyres can wear on their inner edges due to camber and castor angles and wheelspin. Continental SportContacts are the tyre of choice.

Strong, although some owners may have upgraded them. Check for disc lipping and pad wear.

The ECU’s wiring can chafe with the rocking of the engine. An engine torque mount upgrade reduces movement.

Driver’s seat side bolster can wear.

Ford Focus RS Mk2 prices - how much to spend...

Sprinkling of Cat D write-offs, which could mean airbags/seatbelt pretensioners activated, parking sensors damaged. Can be hard to insure.

Trade and private 09s and 10s with 60k miles; some full history, most modified.