BACK TO ALL NEWS
Currently reading: Under the skin: The useful future for tired EV batteries
UP NEXT
Spending 48 hours touring in a Ferrari Roma

Under the skin: The useful future for tired EV batteries

Charging infrastructure is perhaps the one thing with the biggest question mark over fitness for purpose in what is fast becoming an EV revolution.

Companies are working hard to build a high-speed charging network that’s anywhere near as plentiful, accessible and reliable as the refuelling station network, which has taken 100 years to evolve, but they have a huge task ahead of them.

Providing enough public sites with enough chargers to support the growing number of BEVs on UK roads is one thing, but the local supply must also keep up – and installing brand-new chargers at a site doesn’t necessarily mean there’s a brand-new local area distribution network to go with it. Second-life batteries, which have reached the end of their useful lives for powering BEVs, could make a huge difference. The question of where urban users with no off-road parking can charge conveniently remains a challenge, too.

Thankfully, ideas are emerging that should improve things as they take off. In the UK, the Monks Cross HyperHub in York opened on 15 June, fielding four ABB 175kW ultra-rapid chargers and four 50kW chargers as well as 30 7kW chargers in an adjacent area designed to primarily serve park and ride customers. The hub is the result of a collaboration between the City of York Council and EvoEnergy and its 175kW chargers can be upgraded to 350kW at a later date when more BEVs supporting that higher rate hit the roads.

A solar canopy provides weather protection for users and the energy it produces is stored in Tesla Powerpacks to reinforce the local electricity network. For the main source of supply, Monks Cross HyperHub will be powered by only renewable energy supplied via the grid. Two more hubs are due to open in the area this year, one at the Poppleton Bar park and ride and another near the city centre.

Meanwhile, Audi has already successfully trialled its ‘urban charging concept’ in Nuremberg aimed at customers who can’t charge at home. The hub’s six ultra-rapid chargers can be reserved in advance. What sets it aside from existing systems, though, is a degree of self-sufficiency.

The chargers are powered by second-life lithium ion batteries from test cars mounted in cube-shaped containers with a total storage capacity of around 2.45MWh. Fed by only green power, the containers are continuously trickle-charged from the local network by a relatively modest 200kW connection, which reduces the load on the network and avoids any slowdowns. Roof-mounted 30kW solar panels also contribute to the energy store.

Lithium ion EV batteries have a life of 10-15 years, according to Renault. After that, they retain about 75% of their capacity, which makes them ideal for a life where charge cycling is far more gentle. In that role, they should be good for another 10 years. Once they do reach the end of their useful lives, recycling plants like Volkswagen’s can now extract the rare earth materials as well as the basic construction materials. 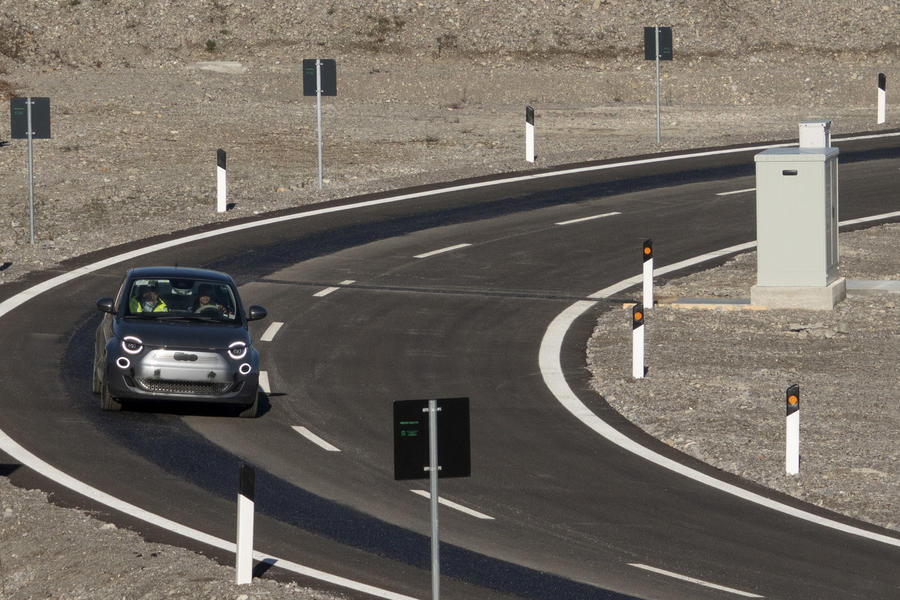 The Arena del Futuro in Italy, built to test dynamic wireless power transfer charging, is now up and running. The Stellantis-A35 Brebemi project is trialling under-road wireless charging so EVs can travel without using battery capacity. The system runs on DC current and uses thinner cables than would be needed for AC. Cables are made from aluminium rather than copper for greater sustainability and ease of recycling.

Strawman_John 4 July 2022
Because it has storage it can be set to only draw energy when renewables are active and you can match the draw to renewables input to grid. That is the advantage of the chargers having storage. Using 2nd life ex car batteries makes it even better.

Plus it reduces the grid capacity required. On low demand days you could use these for load smoothing to reduce need for non renewable energy

Cobnapint 5 July 2022
What happens when the UK is stuck under a cloudy, windless low pressure for over a week, the charger's batteries are exhausted and there's a queue of cars need charging up?
And why would you use the batteries for load smoothing when there's no guarantee you'll be able to charge them back up using renewables?
scrap 4 July 2022

OK the grid doesn't discriminate between different sources of electricity, but the end user can decide to buy only renewable energy, which is clearly what is meant here.