BACK TO ALL NEWS
Currently reading: Under the skin: the evolution of the automatic gearbox
UP NEXT
New Lotus electric sports car to use Britishvolt batteries

Under the skin: the evolution of the automatic gearbox

Since the millennium and rapidly developing emissions legislation, automatic transmission technology has moved on at a pace. To perform economically, engines need to run in the most efficient part of their operating cycle, the ‘sweet spot’, as often as possible.

To do that, they need a transmission with enough gear ratios. Autos increased from three to four gears in the 1980s and from four to five in the 1990s, but to make the jump to six took some figuring out due to the extra space needed. Epicyclic (aka planetary) gearsets are the building blocks of traditional automatic gearboxes and consist of a sun gear surrounded by three or more planet gears inside a ring gear. German transmission manufacturer ZF was one of those which succeeded in making a huge leap in automatic gearbox design in 2002 by incorporating the compact Lepelletier gearset concept with its planetary gearsets. This made it possible to fit more gear ratios into the same, or smaller space.

The new gearbox was the ZF 6HP, which (no surprise) replaced the 5HP and first appeared in the fourth-generation BMW 7 Series. It moved the game on a long way, with torque-converter lock-up to prevent ‘slip’ in the fluid coupling, not just in top gear but also on all forward speeds. It could disconnect the engine from the torque converter to save fuel, too, and had a new ‘ASIS’ adaptive shift strategy. It contained only 470 components instead of the 5HP’s 660, was shorter (thanks to new compact gearsets), weighed 13% less, accelerated faster and used 7% less fuel. It also had an integrated brain called a mechatronic module, marking the departure from the engine and gearbox working independently to the new philosophy of ‘integrated powertrain’, where the engine and gearbox talk to one another. Now, the two could work together to achieve the best fuel efficiency and emissions. The 6HP later gave way to the 8HP, adding two more ratios and further refinements to make it even more efficient.

Another major step, also from ZF, was the introduction of the 9HP in 2013. Designed for transverse engines, the 9HP was quite different from other automatic gearboxes. It supported stop/start systems, which others hadn’t, used a new design of internal ‘dog engagement’ clutches rather than conventional clutch packs to save space, featured nested gearsets that also helped to make it shorter and, as a consequence, was also lighter than its predecessors.

The shift response was claimed to be “below the threshold of perception,” the torque converter locked up at lower speeds, it had ‘curve mode’ to stop it shifting in corners and other features making it better to drive and as efficient as possible.

Some of the latest transmissions have off-the-shelf functions to work with hybrid drivetrains, such as integrated electric pumps to generate the hydraulic pressure needed to keep them working even when the engine has been shut down. Torque-converter-based automatics continue to evolve with new refinements and features and today they play almost as big a part in achieving fuel economy as the engine. 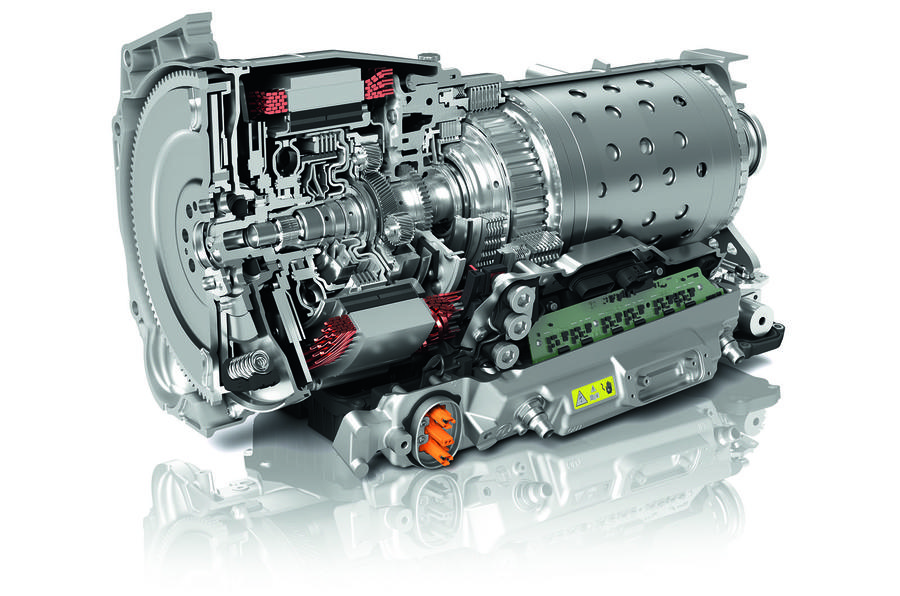 In the latest hybrid automatic transmissions, electric motors do the job of a fluid-based torque converter and provide the basis for a bolt-on hybrid solution for car makers. This neat, eight-speed ZF transmission can produce up to 160bhp and has the power electronics to control it built into the casing for the first time.

Under the skin: How torque converters improve refinement​

Under the skin: how Volkswagen's DSG gearbox predicted the future​

Are you paid to write this by

Are you paid to write this by ZF Jesse ? The fact remains that torque converters are as inefficient as they always have been and shoving in twice as many gears to try an compensate increases size and weight. They also drive badly (not that DSG is much better).

My wife drives a xc60 mild

My wife drives a xc60 mild hybrid with the Aisin 8 speed transverse transmission with a 13hp integrated starter Generator. In my view it is better than the 9hp but not as good as the 8hp that is in my car.
GaryW 9 September 2019

Other gearbox manufacturers are available...

Nice bit of free advertising for ZF...  If we're on a number-of-gears theme, why no mention of the Ford/GM co-developed 10-speed auto with some serious torque-handling ability?  Or Japanese manufacturers?