BACK TO ALL NEWS
Currently reading: Under the skin: How in-wheel electric motors can cut down EV costs
UP NEXT
Hope for Bloodhound LSR project as sponsor talks start again

Under the skin: How in-wheel electric motors can cut down EV costs

Smart mobility is likely to become a part of our lives in the next decade or so. And while autonomous vehicles might not hold much appeal for those of us who enjoy driving, electric smart mobility vehicles could make life a lot easier in congested city centres or for short hops. Switching from delivery vans and lorries operating in city centres to autonomous delivery vehicles could likewise do a lot to reduce the irritation of wall-to-wall traffic as well as to improve air quality.

In-wheel motors have been prototyped and demonstrated for many years, but Oxfordshire firms Saietta (covered in this column before) and Electrically Assisted Vehicles (EAV) are collaborating to make it happen. Saietta makes axial-flux electric motors, which are the shape of a biscuit tin, rather than conventional cylindrical radialflux motors. The fact that the bulk of the size is in the diameter, rather than in the length, means these can fi t in between engines and gearboxes but also inside wheels.

The Saietta AFT 140 motor can also be configured to run on 48V systems as well as high voltage. At 48V, it could be used in a mild-hybrid application but is also ideal for use in low-cost all-electric applications, such as last-mile delivery vehicles or even autonomous pods to carry passengers from park and ride-type facilities into towns.

The collaboration between the two firms will initially be centred on EAV’s Lightweight Inner-City Solutions (Lincs) architecture. A delivery vehicle based on a skateboard chassis was revealed earlier this year. The Lincs delivery vehicle has a low-slung, flat loading bay on which a cab can be fitted to either side to suit a particular use. In this instance, the motors are powered by low-voltage batteries with the idea of doing battery swaps rather than using recharging stations. Although EAV hasn’t confi rmed battery details yet, it has said that the interchangeable battery pack will give a range of around 100 miles.

Saietta motors have 96 electromagnets in the windings (the stator), which generate a rotating magnetic field to attract permanent magnets on the disc-like rotor and make the motor run. Last year, Saietta was the recipient of a grant from the government-run Advanced Propulsion Centre to help it develop and establish production processes that would enable it to manufacture 150,000 motors per year.

The sealed and water-cooled motor is yokeless, lacking the heavy framesupporting windings in a conventional motor, reducing weight and making it more suitable for in-wheel applications. Axial-flux motors also have the added benefit of producing higher torque than a radial-flux equivalent of smaller diameter. For higher-speed EV applications in which handling and roadholding matters more, using four smaller, high-torque axial-flux inwheel motors, rather than the two fitted to the Lincs architecture, could produce more torque with less unsprung weight per wheel.

The problem of unsprung weight in wheel-motor applications could be further improved by combining wheel motors with ultra-lightweight composite wheels. 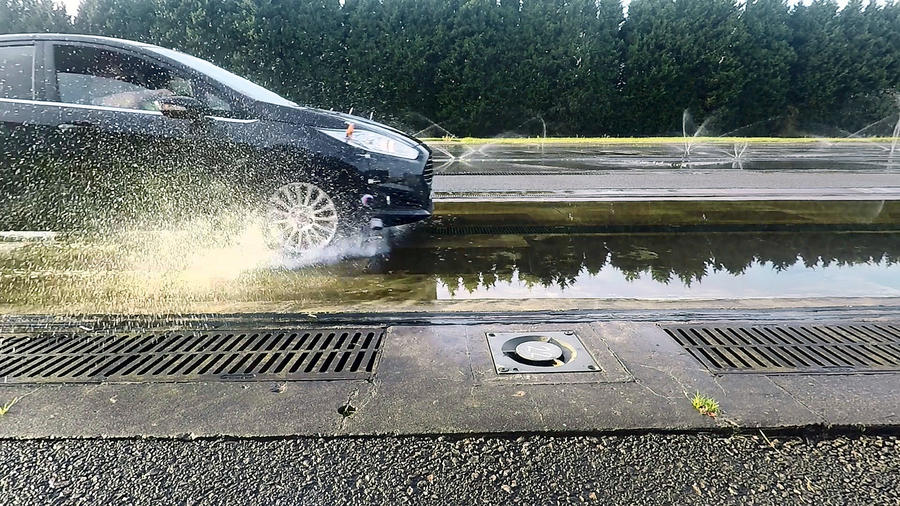 Coventry University’s Research Centre for Clean Growth and Future Mobility has invented a new technology to prevent aquaplaning. Its Run Dry Traction System fires compressed gas close to the front of the wheel to clear away water when aquaplaning is detected. RDTS is designed to fit a wide range of vehicles, and initial testing of it has proved successful.

Hardly in wheel and has so negative impacts, just thinking about a 10mm copper wire being bent every time you turn the steering wheel or hit a bump would keep me awake at night. Besides why have 2 motors in a bad position when you can have one in the right position with 2 drive shafts. Yes to the motor tech No to increases in weight, steering problems, cost increases etc