Half a year with this hot supermini has shown that first impressions aren’t always reliable, unlike an Ibiza Cupra
Open gallery
Close

After six months with the Seat Ibiza Cupra on the Autocar fleet, I’d sum up the car in three ways: energetic, dependable and a bit of a dark horse. It will be sorely missed. But it wasn’t always like that.

Early impressions left me concerned that the Cupra was a slightly numb offering in the hot hatch arena. It was quick, but it didn’t immediately display the flair of some rivals, such as the Ford Fiesta ST, which is the benchmark in this class.

I initially thought it was quite pricey, too. Our generously specced Cupra Black cost £19,430, which is only £485 off the range-topping ST-3 version of the Fiesta. But now, six months on, I think that price is a bit of a bargain. Just goes to show how valuable long-term testing is. 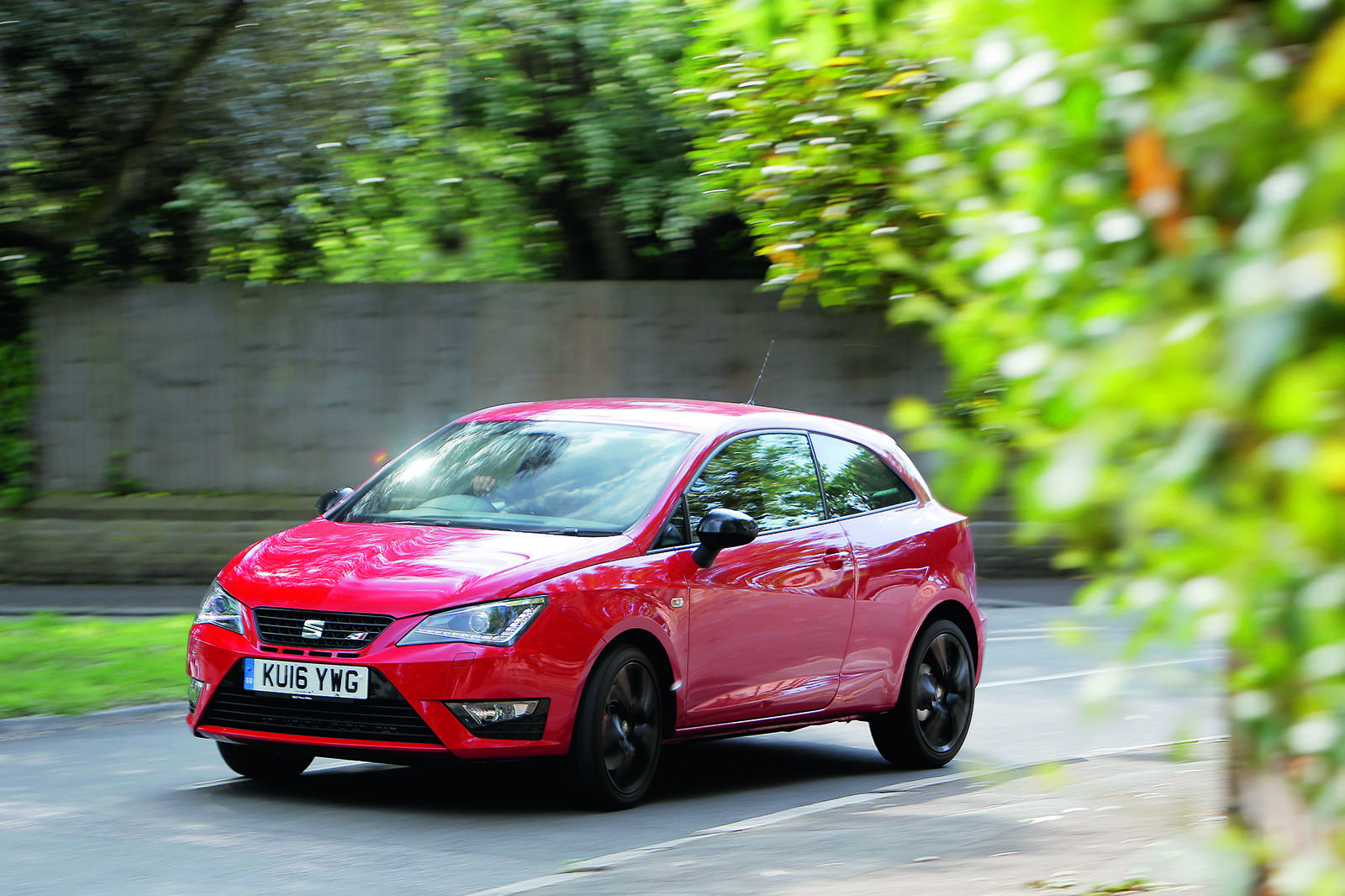 For starters, the Cupra has been a completely faithful companion. Not one issue has arisen. Even though the car has taken part in stints on track and even a spot of motorsport, it has performed faultlessly, whether it be lugging four men and their beer from London to Leeds at outside-lane pace, charging up Prescott hillclimb in the pouring rain or edging through near-gridlocked London traffic.

It has also proven to be highly practical. The 292-litre boot isn’t class-leading, but it has ample room for the weekly shop or a weekend’s worth of luggage, and rear leg room is more generous than one might expect from a three-door car of this size. The cabin itself is probably, to my eyes at least, the tidiest-looking in this class, offering a functional Volkswagen Group layout, with sporty fonts and red lighting to spice things up a bit.

The Cupra’s sound system is as good as the best in this class and even up there with the class above when it comes to quality. Audio may not be a priority for some, but given that many buyers of the Cupra will be young and therefore more likely to enjoy loud music from time to time, it’s a significant feature. The smartphone connectivity with Apple CarPlay and Android Auto compatibility enhances the appeal. 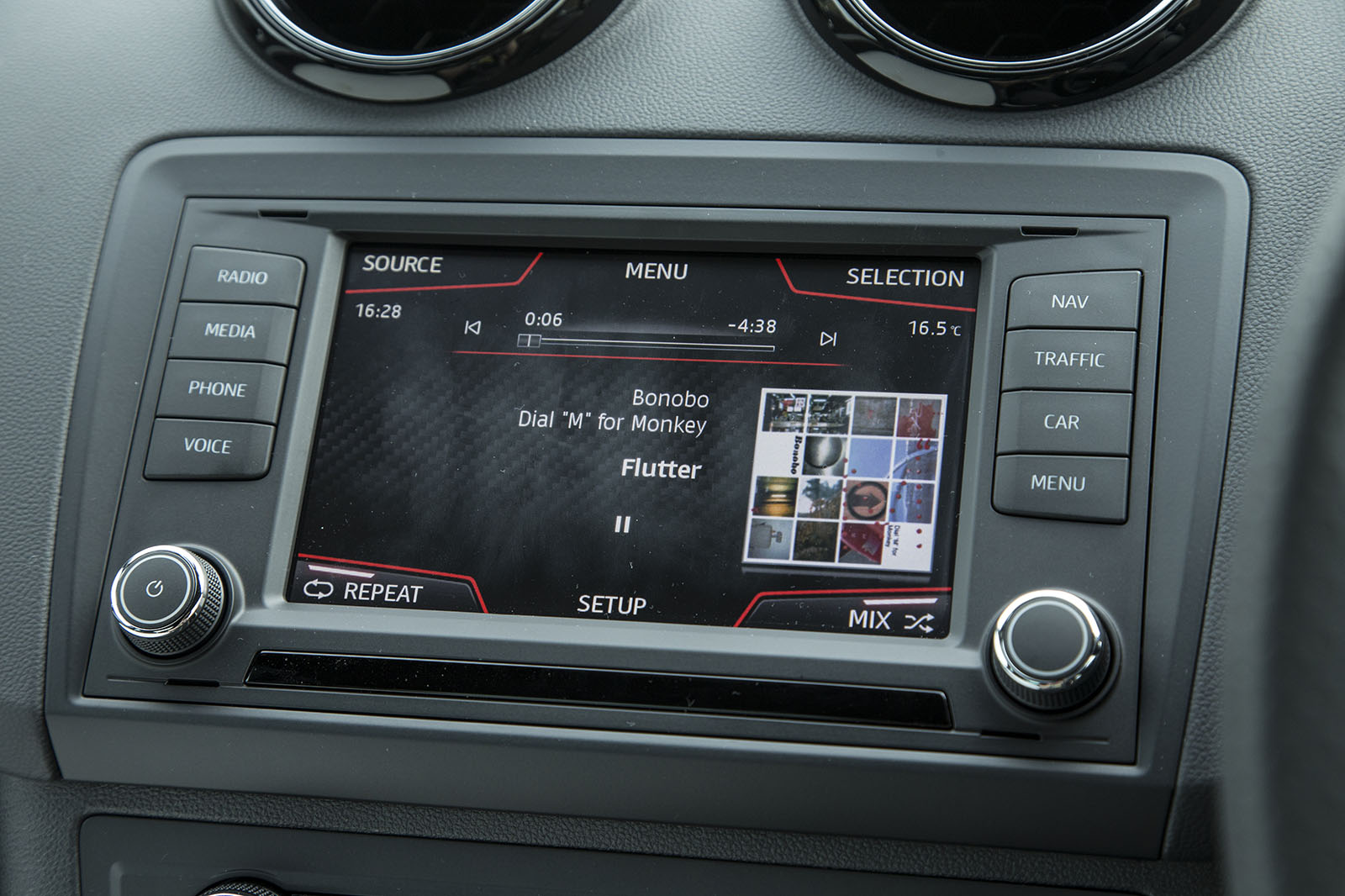 The car’s best asset, though, is its engine, which comes in 1.8-litre turbocharged form and produces 189bhp and 236lb ft. That torque figure is the highlight of the whole package, giving the Cupra enough muscle to worry more powerful cars from the class above.

Our car’s engine really came to life after about 2000 miles. I’ve always fuelled the car with high-octane petrol – hence the higher-than-usual running costs – but I think this has contributed to the engine’s gutsy character, which became more noticeable as the miles piled on. It’s a similar story with the gearbox, which began to swap its initial notchiness for a more positive feel through the gate after a few weeks of use.

If I had one complaint about the car’s powertrain, it’s that the exhaust note is a little too quiet for my liking. The engine itself makes a nice enough noise, which I’d liken more to a high-pitched hum than a traditional four-pot growl, but the exhaust note is inaudible from inside the cabin. I’d like a little raspiness from the car’s tiny peashooter-style twin exits to go with that sporting character. If I were to buy one of these outright, that would be my first modification. 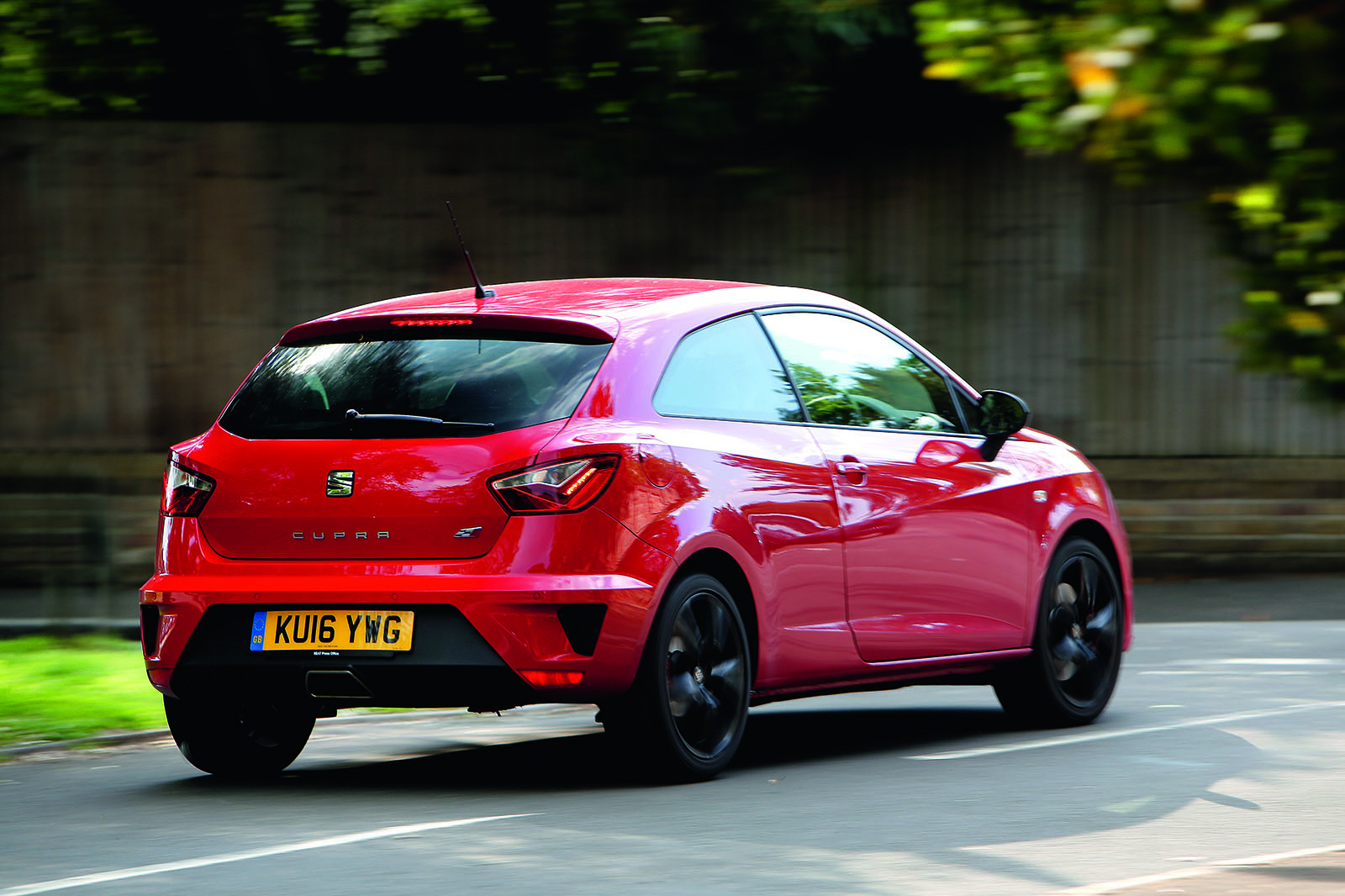 The car doesn’t sit particularly low on its alloy wheels and its ride is rather soft for a hot hatch with this much poke, so the way that it takes city bumps and potholes feels no different from most regular hatchbacks. But the damping is so effective, particularly with the adaptive dampers set to Sport mode, that if you push harder, this suppleness is superseded by excellent body control, which prevents any substantial roll from building and can tidy up driver-induced wobbles effectively and quickly.

Only when wringing the Cupra’s neck would a firmer ride (at the rear in particular) be appreciated. A back-to-back drive with a Fiesta ST200 confirmed that the Ibiza’s softer set-up does hamper its ability to entertain on a B-road.

Nothing harmed the Cupra’s fun factor more than the ESP system, which can’t be fully switched off. To trim it down to its lowest setting, you have to cycle through menus in the infotainment system – there’s no ‘ESP off’ button – and even then, there’s still a noticeable safety net that stops things from getting too playful. Shame. 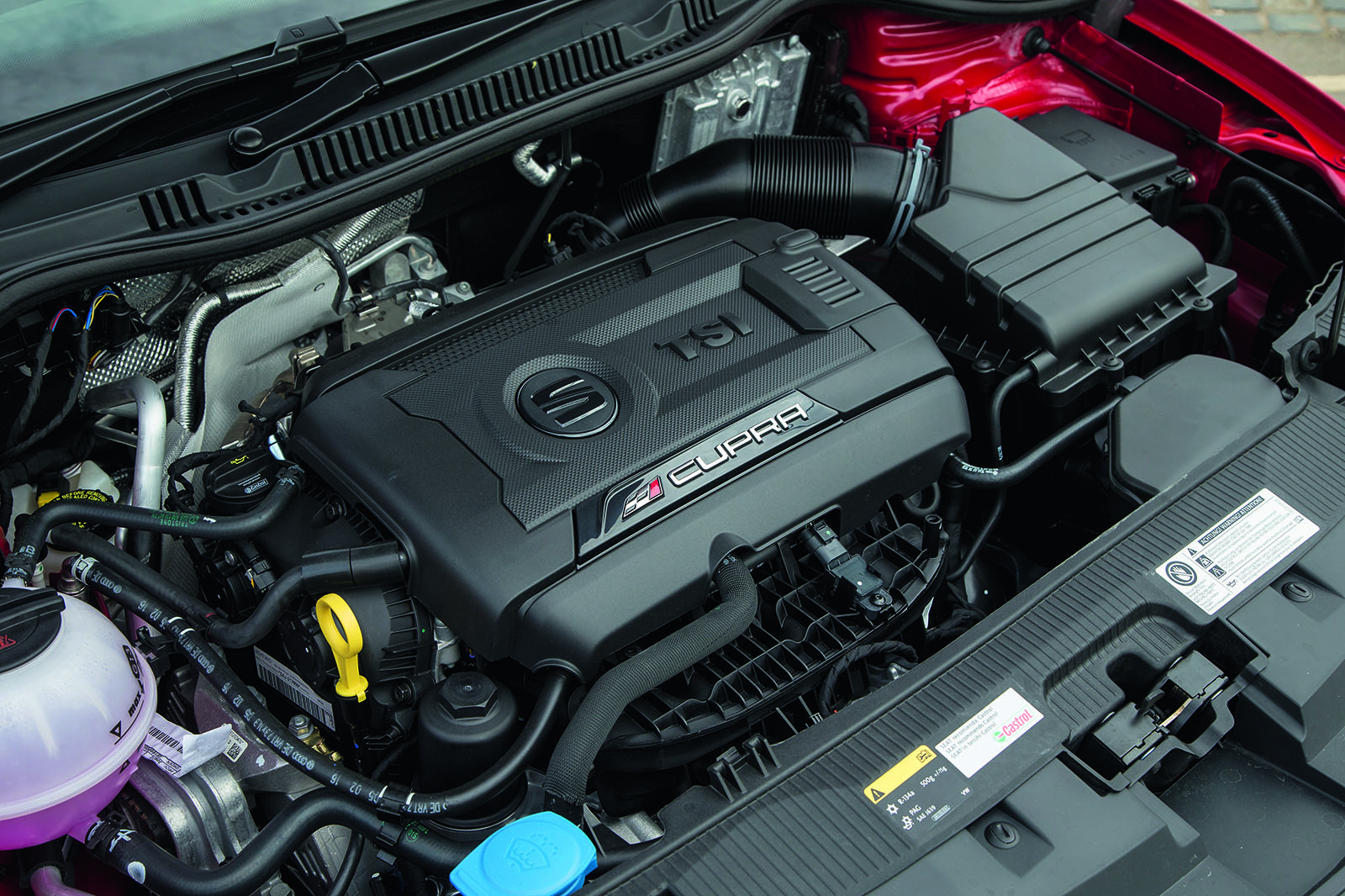 But in some ways, unlike the Fiesta, the Cupra’s character isn’t suited to nine or ten-tenths driving. Rather than being hustled, it prefers to be stroked along a road, engine spinning through its torque-laden mid-range and chassis smoothly ironing out road imperfections. At this pace, progress is still rapid, but the ESP can lie dormant and not impede your inputs.

This was certainly my driving style of choice when the Cupra took part in a rain-affected hillclimb. It proved to be secure but quick on Prescott’s course, and the electronic diff worked well with the torque, so I could spend less time changing gear and more time focusing on lines. It eventually came away with a class win, signifying my proudest moment in the car.

I’ll be the first to admit that the Cupra can’t lay claim to being the driver’s choice in its class. That crown is still held by the Fiesta ST. But for pretty much everything else, the Cupra is right up there with the best of them. When it comes to being an all-rounder, I’m actually not sure anything else could beat it.

Trying out a hillclimb

I would agree with

the comments above, I truly believe SEAT is now the sweet spot in the VW Group family.
Deputy 6 April 2017

As the owner of a Leon ST Cupra I agree. Other cars got better reviews for handling by journalists on expenses paid launches but as a car to buy with your own money and live with day to day (including family holidays with roofracks, potholed roads etc) it's great!
LP in Brighton 6 April 2017

Telling us that "I think high octane petrol has contributed to this engine's gutsy character" frankly isn't much help. Either the SEAT's engine is designed to exploit the advantages of superunleaded or it isn't. And filling up a car with 98RON petrol that hasn't been designed for it is just a waste of cash, despite what the marketing people would have you believe. Why not read the handbook - I'm sure that if there was an advantage to be gained by using the expensive stuff, it would surely say?