Having run a Ford Fiesta ST, we’re turning to one of its rivals to see if its sporting style, strong spec and gutsy performance can get under our skin
Share
Open gallery
Close
Share story

It’s a hard time to be a hot hatch. The European market is now saturated with talented models and performance expectations are so high that when a front-driven hatchback laps the Nürburgring faster than a 10-year-old supercar, nobody bats an eyelid.

In fact, the pace has moved on so much in the past decade that models like this, the 2016 Seat Ibiza Cupra, are barely even considered hot at all and could quite easily fall into the ranks of a warm hatch with just a bit less horsepower.

Back in 2006, the Cupra’s 189bhp and 236lb ft would have placed it right at the sharp end of the hot hatch class, but now, with cars like its bigger sibling, the Leon Cupra, closing in on 300bhp, the Ibiza looks comparably lukewarm.

The market for these sub-200bhp hatchbacks is growing all the time, though, as demonstrated by the popularity of this car’s main rival, the Ford Fiesta ST.

With affordable running costs and insurance brackets that aren’t completely out of reach to younger drivers, the Ibiza Cupra and its similarly sized brethren certainly make for appealing first steps on the performance car ladder.

Priced from £18,100 (or £277 a month with a £277 deposit), the latest Ibiza Cupra is based on the fourth-generation model but ditches its turbocharged and supercharged 1.4-litre engine for a turbo 1.8.

Official performance figures show that the new car can accelerate from zero to 62mph in 6.7sec, three-tenths faster than the old one, and has a top speed is a claimed 146mph.

Given that the Cupra is no featherweight — it weighs 1260kg — these figures are mightily impressive and demonstrate the strength of the car’s new engine.

Our long-term test car is the higher specced Ibiza Cupra Black, which sells from £18,900 and is expected to be the best-seller in the UK. 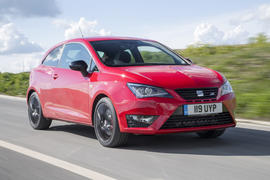 Compared with the regular car, it gets a bigger 6.5in infotainment system, black alloy wheels, black door mirror covers and red brake calipers.

These systems are available as an option on the standard car.

All Ibiza Cupras get automatic wipers, automatic lights and 17in alloy wheels as standard. Alcantara trim, a panoramic glass roof and ambient lighting are optional extras.

Interestingly, the Cupra is now only available with a six-speed manual gearbox — the old car’s DSG dual-clutch auto is no longer offered.

Seat cites the UK’s preference for three pedals in this category as the reason for the switch.

First impressions of our new long-termer are largely positive. Having covered 1300 miles, most of which have been in town, it’s clear that the Ibiza is more refined than some of its rivals when clambering over speed bumps and potholes.

The ride is quite firm, giving a sense of purpose even at low speed, but it’s far from crashy and significantly more comfortable than the more harshly sprung Fiesta ST, for example.

When the car was delivered to us with less than 70 miles on the clock, the engine felt muscular but slightly breathless at the top of its range. But it is now noticeably happier to rev towards its redline, although the engine’s best performance is still felt through the mid-range.

At first, the Ibiza Cupra didn’t feel particularly fast off the line because the revs surged through the engine’s strongest point in a couple of seconds and quickly arrived in that less potent top end.

But I’ve learned to ignore the last third of the rev counter and keep the engine spinning through its torque laden mid-range, with the full 236lb ft available from 1450rpm to 4250rpm.

It does take some time to adapt to this short-shift style of driving and I don’t doubt that a more rev-hungry motor would be significantly more enjoyable to employ on the right B-road, but when powering off from motorway slip roads or out of busy junctions, the immediacy of that torque makes the Ibiza Cupra feel particularly potent.

Throttle response is also impressively quick for a blown engine, which makes heel-and-toe blips of the throttle all the more satisfying. It’s helped by well placed pedals that allow you to roll your right foot off the brake and onto the accelerator, rather than requiring a full twist of the heel.

The Ibiza’s six-speed manual ’box has a positive movement through the gate and it’s happy dealing with fast changes, but a lack of feel can make it hard to be accurate when really working it.

The clutch pedal is also very light and has a high biting point, which feels a little unnatural in a hot hatch.

That said, there’s a lot to be excited about in our new long-termer.

I’m looking forward to stretching its legs on more demanding country roads this summer, to really test the effects of its Sport damper setting — selectable via a button on the dashboard.

Thankfully I won’t have to wait too long for an answer because I’ve a trip to Yorkshire planned this weekend, so our red Ibiza Cupra will have its nose pointed at some of the country’s best driving roads in a matter of days.

15 June 2016
Buy why o why Seat do you (and Ford) insist on 3 door models only for your fun hatches? I drive on the glorious Yorkshire roads mentioned everyday. Drop the kids at school club (5 door lets them jump out themselves) then I have 12 miles of B roads to commute. Small hot hatches are perfect but only 5 door ones are the expensive Audi S1 and VW Polo!!

15 June 2016
Could be, @Deputy, that 5 is far too sensible and practical for the target buyer. Is the Leon for Dad's perhaps?

15 June 2016
You're spot on. But the marketing team have never lived on a Yorkshire B road where a cars width can easily limit its' use! (I do actually have a Leon ST Cupra! But would have been tempted by an Ibiza ST Cupra if it existed, the old Fabia VRS estate nearly found a place on my drive as well)

15 June 2016
@Deputy, precisely why growing car size annoys. I had occasion recently to drive on a West Sussex route that I used to drive a lot about 30 years ago. Thing is, I did not enjoy it nearly as much as I did then. I figured that part of the reason was the roads now seemed "narrower" (i.e. my car is wider now!), also the plethora of 40mpg speed limits/speed cameras do rather dim the enjoyment. And finally, I did not have to work as hard since the modern car has too-easy performance. Perhaps sometimes less is indeed more.