BACK TO ALL NEWS
Currently reading: Revised Hyundai Veloster Turbo spied
UP NEXT
Stellantis exec: range and charging biggest barriers to EV adoption

A revised version of the Hyundai Veloster Turbo has been spied at the Nürburgring. The controversially styled coupé-cum-hatchback is being given a mid-life styling refresh, with the tweaked car expected to be launched in the middle of 2015.

The Veloster Turbo's asymmetric 2+1 door layout and quirky styling divided opinion when the car was first launched in 2011. The distinctive layout aims to combine the practicality of a hatchback with the sharp styling of a coupé.

The heavily disguised prototype seen pounding around the German race track retains the existing car's key features and dimensions, but some tweaks to the grille and bumper can be seen and a different headlight design is also apparent.

Those changes appear to bring the car into line with the Hyundai ix35, which has also been caught testing this week.

Our spies report that the Veloster Turbo test mule's interior was also heavily cloaked, suggesting that the refreshed version could benefit from some cabin upgrades.

The Veloster Turbo is currently the most powerful version of the car on sale in the UK. It features a different chassis set-up to the standard car, as well as bodywork changes. Its 1.6-litre T-GDI engine puts out 184bhp at 5500rpm and 195lb ft between 1500rpm and 4500rpm. 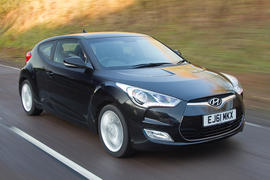 I can't possibly explain their popularity, but the dealers can't get enough of them and they fly off the forecourts.
What this says about Aussie taste in cars I shudder to think. A neighbour of mine has one in matt grey (he had it filmed - a good way to achieve the effect without it being so fragile as Matt paint) - and it doesn't look quite so bad as the yellow and orange ones.
I've driven it and it's just about OK but, even though it's a turbo (they mostly are) it's not even remotely quick.
fadyady 15 May 2014

So I deduce that it's not exactly setting the UK sales charts on fire. I saw a bold yellow a few days ago and quietly admired it for its stand-out looks and usefully fresh lay-out and admittedly for offering us a road less trodden.
kraftwerk 15 May 2014

...selling it with the disguise attached. It'd be more successful.