The Kia Soul electric vehicle has been spied completely undisguised about half a year before it is expected to go on sale in the UK.

The Soul, Kia's first global electric vehicle, was spotted on the streets of North America during a promotional filming event. It is due to be officially unveiled at the Chicago motor show, which starts on 6 February.

Autocar got behind the wheel of a disguised Soul EV prototype late last year. This latest Soul is due to be launched with conventional engines in March, with the EV expected to follow in September.

The vehicle has adopted the same platform as the Kia Cee’d. It is wider and longer than the first-generation Soul, with a 20mm longer wheelbase at 2570mm, as well as a 29 per cent stiffer body shell and revised suspension geometry.

The platform was designed to accept battery packs under the rear seats, which means that little of the second-generation Soul’s 354-litre boot space has been sacrificed for the EV technology. It does, however, bring a weight penalty in the region of 200kg over the standard cars.

The spy photographs clearly show that the second-generation Soul hasn't strayed too far from its predecessor in terms of looks.

The electric version has some subtle differences to the petrol variants, including different lights, a revised bonnet and grille and low-rolling-resistance tyres.

In the grille are two charging points, one each for standard and rapid charging. From a standard household electricity supply, Kia estimates a full charge will take about five hours; a rapid charge can replenish a depleted battery to 80 per cent capacity in 25 minutes.

Inside, the Soul EV gets bespoke dials and gauges, and energy-saving touches, such as the option to turn off the climate control to empty passenger seats to conserve power.

The claimed range is about 90 miles in ‘city’ mode or more than 120 miles on the open road. Kia estimates that the Soul EV will cover 0-62mph in less than 12 seconds and go on to a top speed of 90mph.

The 'Eco Electric' badges on the flanks of the Soul EV form part of Kia's revised branding for its eco-friendly vehicles. The cars are grouped under the 'Eco Dynamics' banner, then broken down into four categories, with 'Eco Hybrid', 'Eco Plugin' and 'Eco Fuel Cell' joining the electric vehicles.

The Kia Soul EV will come to Britain in very small numbers at a price in the region of £25,000 before any government grant is applied. 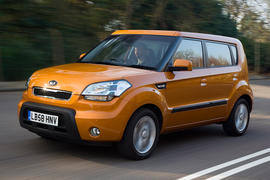 Seems strange to make an electric eco-car as aerodynamic as a brick. I quite like it though - apart from the pointless sealed grill. Lesson to be learnt there - don't make the shape of your grill based on your brand identity. BMW excluded.