BACK TO ALL NEWS
Currently reading: SsangYong to preview new X100 SUV with Paris motor show concepts
UP NEXT
UK car finance tightened to become 'fairer' for customers

Final, thinly veiled glimpse of new X100 SUV to be presented in Paris before the car's market introduction in the middle of 2015
Share
Open gallery
Close
Share story

SsangYong will present a concept that closely preview its Nissan Juke rival, the X100, at the Paris motor show next month.

Two versions of its concept, badged the XIV-Air and XIV-Adventure, aim to showcase the “style, practicality and convenience” the X100 will offer.

SsangYong's new model is set to go on sale in the middle of next year, and will compete in the crowded crossover market with the likes of the Nissan Juke.

The concept, in either specification, measures 4195mm long and has a 2600mm wheelbase – very close to the dimensions of the current Juke. The XIV-Air is an open-top version of the car, while the XIV-Adventure is geared towards off-road driving.

Engine options for the concepts comprise a 1.6-litre petrol and diesel, both of which are four-cylinder units. Those engines will also power the production car. A hybrid version, which combines the diesel engine with an electric motor and a lithium-ion battery, is also being considered.

The XIV-Air and XIV-Adventure will be the latest in a long line of concepts which have previewed the X100 since 2011. Previous concepts in the series include the XLV and SIV-1. The XIV name used here is short for “exciting user-interface vehicle”, says SsangYong.

Pricing for the X100 won’t be revealed until closer to its unveiling at the Geneva motor show next year, but it’s expected the SUV will sit below the Korando in SsangYong's UK line-up, meaning a price of around £12,500 is likely. 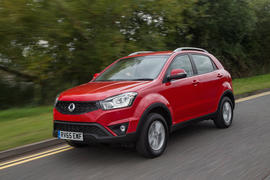 Is this really a SsangYong

How can this be a SsangYong - it's not ugly!