BACK TO ALL NEWS
Currently reading: Performance and economy gains for new Hyundai i40 mild hybrid
UP NEXT
Shame to Lusso you: A eulogy to the last four-seat Ferrari GT

Performance and economy gains for new Hyundai i40 mild hybrid

New mild hybrid powertrain could reduce CO2 emissions by as much as 20 per cent, as well as boosting power
Share
Open gallery
Close
Share story

A mild hybrid version of the Hyundai i40 which offers economy and performance benefits over a standard non-hybrid production car has been showcased at the Paris motor show.

Based on a 1.7-litre diesel powertrain, the i40 48V Hybrid show car is fitted with a 48-volt lead-carbon battery, boosting power by 15 per cent and reducing CO2 output by up to 20 per cent compared to the standard oilburning production model.

The major significance, Hyundai says, is that the system costs about a quarter of the amount that a full hybrid does to build. Additionally, the mild hybrid solution can be installed for a weight penalty of just 46kg, much less than full hybrid technology.

The 48V Hybrid technology can be easily introduced alongside existing powertrains and Hyundai says it "could have far-reaching potential application" in future Hyundai production cars.

Jürgen Grimm, head of powertrain for Hyundai Motor Europe, told Autocar: "The battery technology is even more simple and more cost-effective than a full hybrid. We can gain significant improvements in economy and performance even with this mild hybrid for a much more attractive cost."

The experimental car replaces the conventional alternator with a belt-driven starter generator (BSG), which means the engine is able to restart with almost no noise or vibration.

The i40 48V Hybrid can operate in electric-only mode at low speeds and when cruising. The lead-carbon battery pack recharges itself during deceleration and through regenerative braking, with the BSG working as a generator. During acceleration, the BSG supports the engine with its additional 10kw to reduce fuel consumption and CO2 emissions.

The lead-carbon battery was chosen due to its excellent power-to-cost ratio, rapid charging capability and high levels of durability.

It requires no active cooling system and can therefore be stored within the spare-wheel well, ensuring the car's luggage space is not compromised. Most of the battery's components can be recycled at the end of its lifecycle. 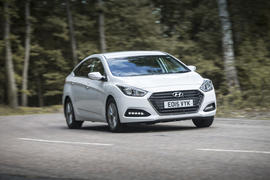 Sometimes a solution is right in front of your nose but you can't see it. It would be interesting to see the outcome of this exercise - if it works.