BACK TO ALL NEWS
Currently reading: BMW i8 long-term test review: first report
UP NEXT
First drive: 2022 BMW XM prototype

The ground-breaking petrol-electric coupé has surprised and intrigued in small doses, but how does it stand up to long-term scrutiny in everyday life?
Open gallery
Close

Our introduction to the BMW i8 long-term test review. Stay tuned for more in the coming months.

Theory and practice. On paper and in reality. The idea and the execution. There are many ways to explain why the most ground-breaking concepts turn out to be less than the sum of their sometimes extraordinary parts when subjected to the only test that has ever really mattered: that provided by the great gimlet-eyed arbiter of all things good and bad, better known to you and me as the real world. Which is why I’m going to be spending the rest of this year and some of next living with a BMW i8.

I know. I know. Excuse and explanation, another opportunity for some apparently inadvertent slip twixt cup and lip, but my motives here really do extend beyond the natural urge of any enthusiast to get to know one of the best-looking, most technologically advanced cars yet to hit the road.

The questions it will need to answer over the months to come are myriad. How is its six-figure price justified when a base-spec Porsche 911 is more powerful, lighter and almost £30,000 cheaper? We know its rated 134.5mpg consumption is a nonsense brought about by official testing requirements so out of date as to render their results genuinely worse than meaningless, but does all its mainframe-melting tech really result in fewer of the world’s fossil fuels getting torched?

Can a BMW, however advanced, really sit comfortably in this part of the market? It has tried twice before, with the M1 and Z8, and felt no need to replace either car. 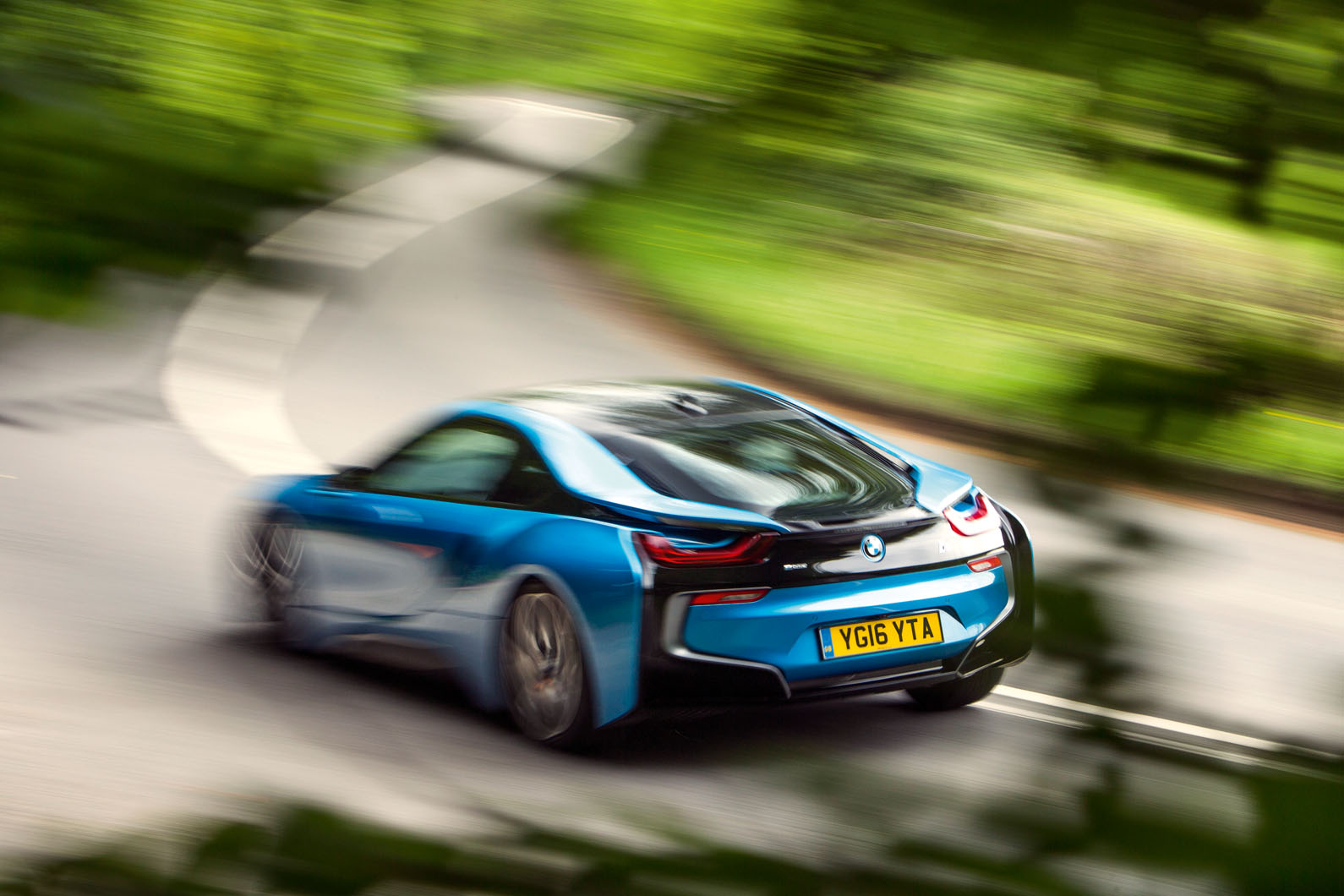 But to me, there’s another question, simpler yet more important than all of the above. So blinding is the science lurking within those sleek carbonfibrereinforced plastic lines that it can too easily cloud the most important question of all: when stripped back to what it does rather than how it is done, what kind of car is the i8? To me, the answer is far from obvious.

It doesn’t appear to be a traditional sports coupé in the 911/Jaguar F-Type idiom, but nor is it a conventional grand tourer like the BMW 6 Series or Mercedes-Benz SL. Does it strike a balance between the two and, if so, how successfully? Can that tech really enhance the experience of living with and driving the car, or are its effects only felt in your pocket in terms of company car tax, Vehicle Excise Duty, fuel and congestion charge costs? To me, if a smaller hit on your pocket is all you’re buying, the car has fallen at the first.

Similarly, if having a 1.5-litre threecylinder engine as your primary source of power detracts from the pleasure you might otherwise have found in the company of a large-capacity V6 or V8, then, to me, it will also have failed.

The scale of the job is not to be underestimated. Million-pound hypercars aside, the i8 has to be the first car to offer a world-class driving experience not despite its hybrid drive but because of it.

Having been its keeper for precisely six hours, it is rather early to be making such judgements. The car is still running in and will be doing so for the first 1200 miles of its life. But if the fact that I can’t stop peering out of the window at it is any guide, I think it has at least stepped off on the right foot.

I like, too, that if you didn’t tick a single options box, you’d still own a comprehensively equipped car. And while you may well be thinking that you’d bloody well hope so for that kind of money, for other manufacturers of six-figure motors the list price is little more than the starting line for a long and expensive journey to the actual transaction price. 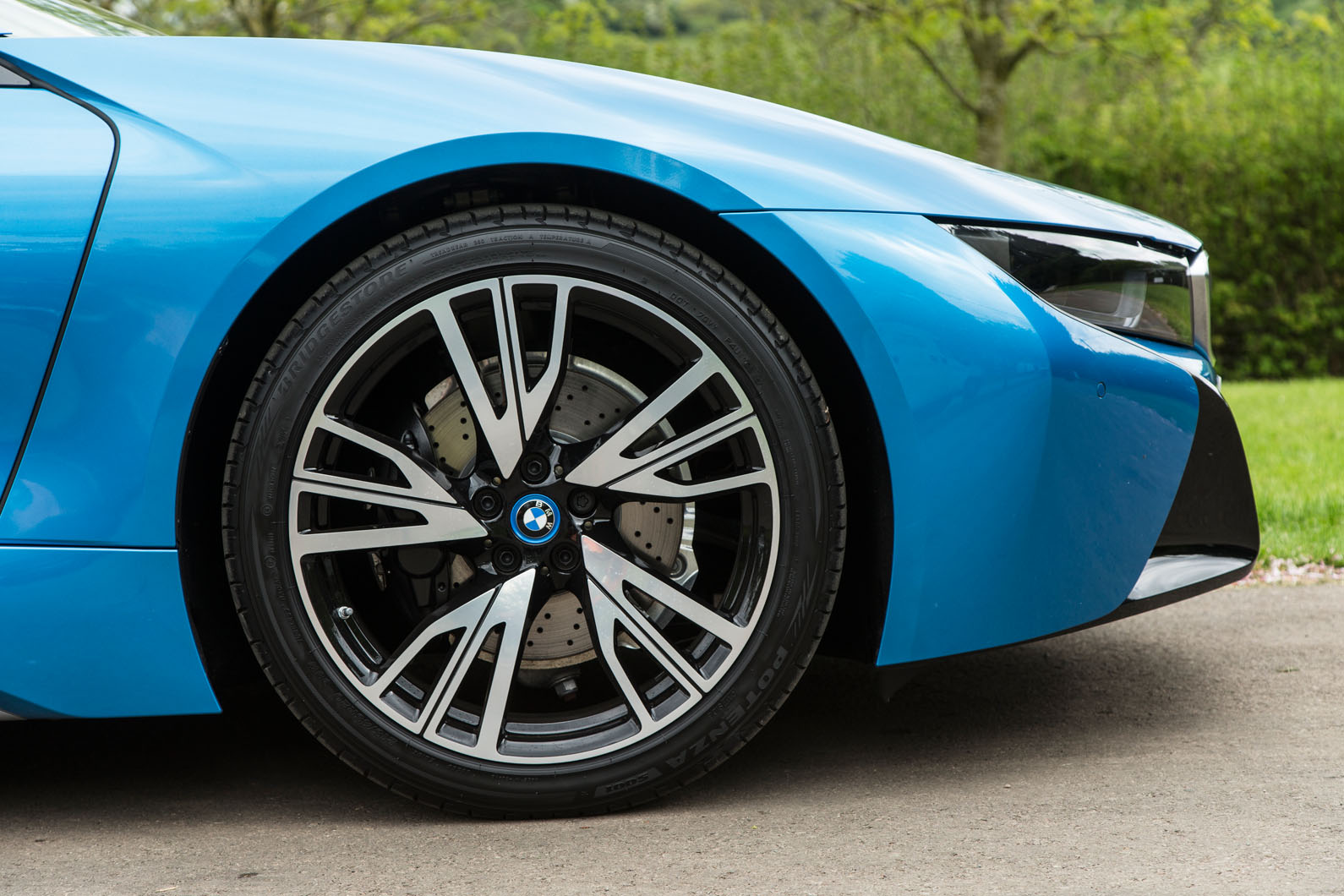 The only thing I requested was that it was not white, and given the choice it would be blue. So it arrived in beautiful optional Protonic Blue paint with Frozen Grey accents, to which BMW added W-spoke wheels, a premium sound system, keyless access, blue seatbelts, an anthracite headlining, internet connectivity and ‘exterior sound’ so pedestrians can hear it coming. I’m delighted to have the paint and stereo upgrade and think exterior sound should be standard but wouldn’t miss the rest.

Then again, and with the exception of £310 for changing the seatbelt colours, I’d say the options are very reasonably priced; £1150 for the 20in W-spoke wheels is little more than the £1095 BMW will charge to put 18in rims on your 520d with a list price of one-third that of the i8. And, yes, the i8 does have 20s as standard, but I still think it’s good value.

By the time I report back, the i8 will be run in and I’ll be starting to get some answers from this most complex, fascinating beast. The challenges it faces may seem immense, but it is also true that if all it manages to be is as good as it looks, it will be a triumph.

I love this car but..... What the heck is happening to second hand values. Nearly new cars (1-2 years old, very low mileage, high spec) are available for £30-40k less than new. Clear oversupply in the market. I just couldn't get comfortable that I had any idea what a car would be worth in a few years time so bought a 911 997 instead. Still hanker after the i8 even though I love the Porsche.
Phil R 20 June 2016

"exterior sound should be standard but wouldn’t miss the rest."

It'll be interesting if you think this at the end of the test. Everyone when they first drive an EV goes "oh that person almost walked into the road, it must be because they didn't hear me". Then you go back to a combustion car or bike and the same thing happens, and you realise that people are just a bit careless in general, regardless of if they can hear the car coming or not.

I have to agree with Mr

I have to agree with Mr Frankel, it is a car that is particularly difficult to categorise.

To my mind BMW have pitched this as a sports car aimed at the original Prius crowd (film star, rich environmentally friendly types, etc...), the sort that drive a Prius (or hopefully have part exchanged it for an i3 by now) but want something that says more about their image without being environmentally contradicting.

It certainly is very pretty (I drive past one every day) but to me, as a car, it lacks something - something I can't put my finger on.

I await this long term report with anticipation, to see if I'm wronf or my gut reaction is right.

Maybe @TegTypeR, it is just that it is difficult to pigeonhole the car? That aside, one was following me in town the other day, and the relatively narrow front tyre width coupled with the wide track looked destinctly weedy compared with the rest of the car, good for efficiency no doubt, but not much help to looking the real business.
View all comments (5)