BACK TO ALL NEWS
Currently reading: Volvo S80 will be next model to receive XC90's upgraded interior
UP NEXT
All-new entry-level McLaren to be 600bhp-plus V6 PHEV

Volvo S80 will be next model to receive XC90's upgraded interior

New XC90's clean, modern interior design to be carried over on to other large Volvo models, starting with the S80
Share
Open gallery
Close
Share story

The next car to receive Volvo's significantly upgraded interior styling, which will first be seen on the all-new XC90 SUV when it makes its debut at the Paris motor show in October, will be the S80 luxury saloon.

A company executive revealed to Autocar at the Goodwood Festival of Speed that the XC90's interior, which represents a radical departure from the Swedish firm's current designs, will be incorporated into other Volvo models, starting with its larger and more premium offerings.

The S80 is due for replacement in two to three years time, the executive said, with the new model featuring an interior re-style based on that of the new XC90. The same would also be true of any next-generation V70.

In the new XC90, the buttoned dashboard of today's Volvo models is replaced by a large central touchscreen which handles almost all infotainment and navigation functions.

Volvo design boss Thomas Ingenlath says the new system is designed to "keep eyes on the road and hands on the wheel as much as possible", with most functions able to be controlled by a significantly improved voice recognition system.

Other interior elements, such as the use of wood and diamond-cut controls, should also be carried over.

Volvo will be looking to perform well in the luxury saloon market with the launch of a new S80. With just over 500 S80 models registered last year in the UK, it has been speculated that Volvo could abandon the sector altogether, but the firm's UK boss Nick Connor was quick to reassure potential buyers.

He told industry journal Car Dealer: "Lots of people will stray into SUVs, big and small, but we absolutely believe there is a place in the market, especially in the UK, for large executive saloons." 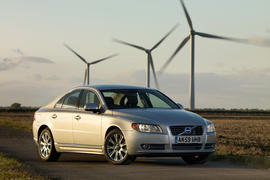 The Volvo S80 is a comfortable way to cover long distances, but it fails to excite in a way the class best can

I am very surprised by that remarkably low number!

28 June 2014
“With just over 500 (only five hundred) S80 models registered last year in the UK, it has been speculated that Volvo could abandon the sector altogether, but the firm's UK boss Nick Connor was quick to reassure potential buyers”.
.
I am very surprised by that remarkably low number of S80 registrations in the UK!

29 June 2014
It's an ageing executive saloon that's past its best. Not don't get me wrong, I like it, but it never sold amazingly well even when new as it was never that competitive to begin with! I have high hopes for the replacement, though, as the new XC90 looks amazing.

30 June 2014
...a new Volvo, to be released sometime in the next few years, will have an interior similar to that of another, yet to be released, new Volvo, and this counts an news? Is it me, or are Volvo desperate to generate news stories out of almost nothing in the absence of any new models. Well done to their PR people for getting Autocar to take the bait! Regarding the upcoming XC90, I don't doubt that it will be good but, please, no more stories, just get on with it!