BACK TO ALL NEWS
Currently reading: Volvo 'Golf' to lead product push
UP NEXT
New Mercedes-Benz EQA revealed as sub-£40k electric crossover

C30-based five-door will rival the VW Golf; will take priority over the launch of a new XC90
Share
Close
Share story

Volvo will build a rival to the VW Golf - out in 2012 - as part of a fresh product plan devised under new CEO Stefan Jacoby.

Speaking last week in London, Jacoby said that the next-generation entry-level Volvo “will be a derivation of the C30 - a Golf competitor”.

Volvo’s entries in this class have been saloons - the S40 - the V50 estate and the C30 coupe, but it has not offered a five door hatchback since the 440 range was deleted in 1995.

Jacoby has substantially shuffled the product plan since arriving, the Golf-class car, which would give Volvo a competitor in Europe’s biggest segment, taking precedence over an XC90 replacement.

He also revealed that Volvo’s brand positioning would shift towards ‘functionality and Scandinavian elegance’ and away from the sportiness that it has emphasised in recent years.

Volvos will also get a more distinctive face, which will also debut on the new five-door.

See all the latest Volvo reviews, news and video 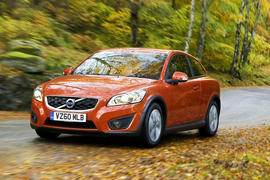 Quite right about stop trying to ape BMW. Volvo knew where it was before Ford bought it out and started charging for safety options.

And hopefully it'll have a spare wheel rather than just a tyre sealant kit as the new S60/V60 does.

A 340 for the 21st century? Actually, I'm not being sarcastic, they were very successful in the UK, being a (slightly) premium hatchback before Audi invented the A3. Like someone else said here, stop trying to be BMW and go back to making Volvos!