The covers have been lifted off the new Volkswagen Amarok, the larger and more advanced successor to the German brand's original 12-year-old pick-up truck.

Twinned with the latest Ford Ranger, alongside which it was conceived and developed in a “global alliance” engineering program that took place in Australia, Germany and the US, the new Volkswagen is planned to go on sale locally by the end of 2022.

Volkswagen has confirmed that a two-door single-cab workhorse is also planned to join the line-up next year as part of a concerted effort to make the Amarok challenge established rivals such as the Toyota Hilux, the Mitsubishi Triton and the new Ford Ranger, with which it shares its ladder-frame chassis, mechanical package and other key elements.

Sales of the original Amarok totalled more than 830,000 worldwide, so Volkswagen has high hopes for its successor, key markets for which include Australia, New Zealand, Africa, the Middle East and Europe. 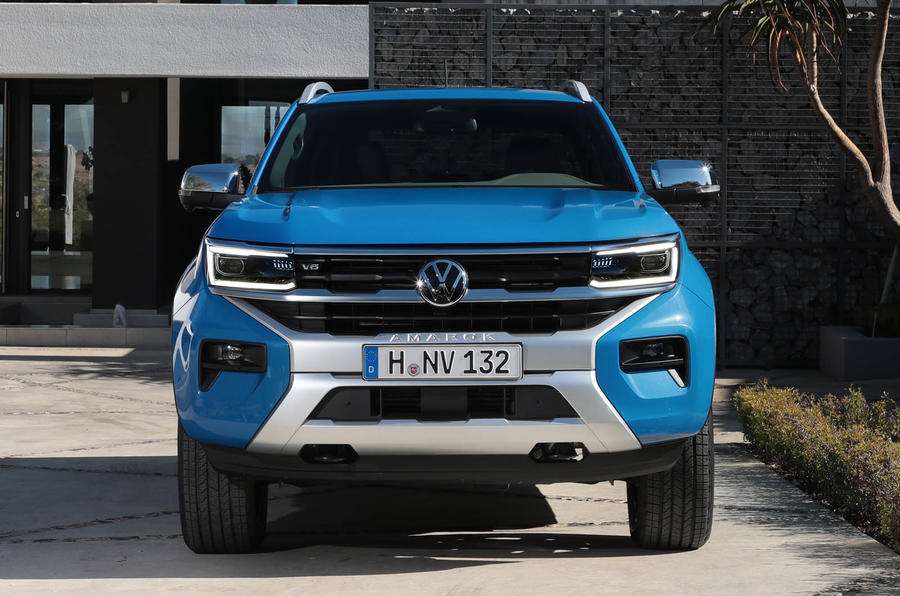 As hinted at in a series of earlier design sketches issued by Volkswagen, the 2023 Amarok takes on a distinctly more modern appearance, with a higher-set front end featuring angular headlights (optionally with Volkswagen’s IQ Light functionality and matrix properties), new-look day time running lights, a slimline grille and an X-shape front-bumper graphic.

As with the structural hard points underneath its steel body, various elements within the exterior are common with the Ranger, including the windscreen, roof, side and rear windows, door handles and mirror housings. The remainder, including the design of the bonnet, wings and outer door skins, is unique to the Amarok.

An increase in capacity now allows the roof rack to accommodate loads of up to 350kg – a significant 150kg more than before. Along the sides, the new Amarok receives larger wheelhouses front and rear.

Volkswagen has also provided the Amarok with a more prominent styling bar, which serves to visually lengthen the cabin, giving the new model an added dash of style compared with its predecessor.

The load bay offers an increased payload of up to 1160kg. It can be secured with an electrically operated roll cover, similar to that offered on the Ranger Wildtrak and operated either from the cargo box itself, inside or alternatively by a remote means via the keyfob.

A hardtop for the load bay is also planned to be offered in the UK. 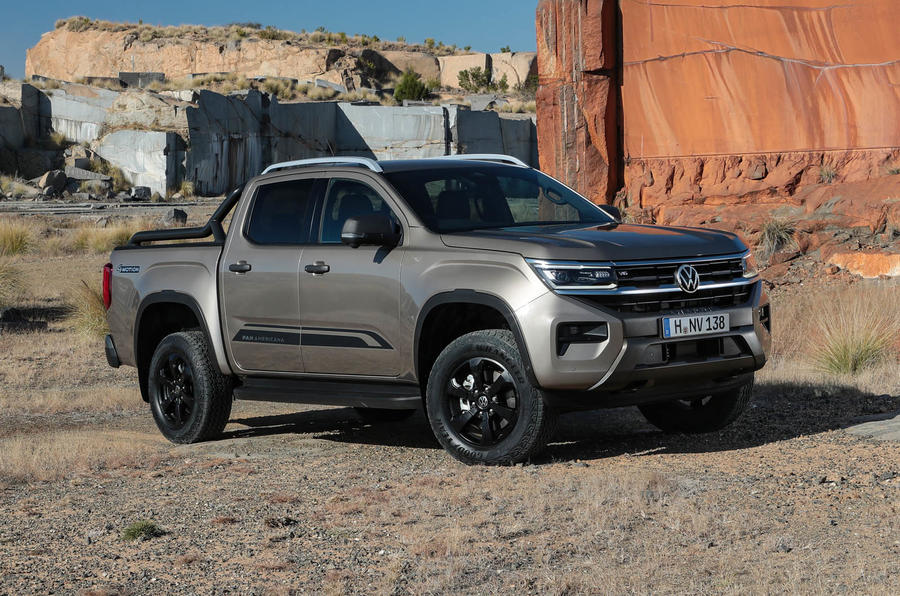 Volkswagen says the load bay can accommodate a Euro pallet sideways between the rear wheel arches. New eye rings, each capable of handling up to 500kg of load, are also included.

Among a long list of options is a newly developed bike-holder and what Volkswagen describes as a multi-function carrier system.

The tailgate now features the Amarok name stamped into the metal.

The new Volkswagen is 96mm longer than before, at 5350mm in double-cab form, although its width has decreased by 34mm to 1910mm. Dependent on the wheel-and-tyre combination, its height is increased by 10mm to 1888mm. It's the wheelbase with the biggest change, though, it having been extended by 173mm to 3270mm.

With shorter overhangs, the new Amarok is said to be better suited to off-road driving than its predecessor. Its front and rear approach angles are 29deg and 21deg respectively, while the ramp angle is 21deg.

Launch models are planned to receive 18in wheels as standard, although buyers will be able to specify optional wheels of up to 21in in diameter.

Further options include a factory-fit bull bar, underbody protection elements, eye rings for towing and a snorkel attached to the A-pillar. 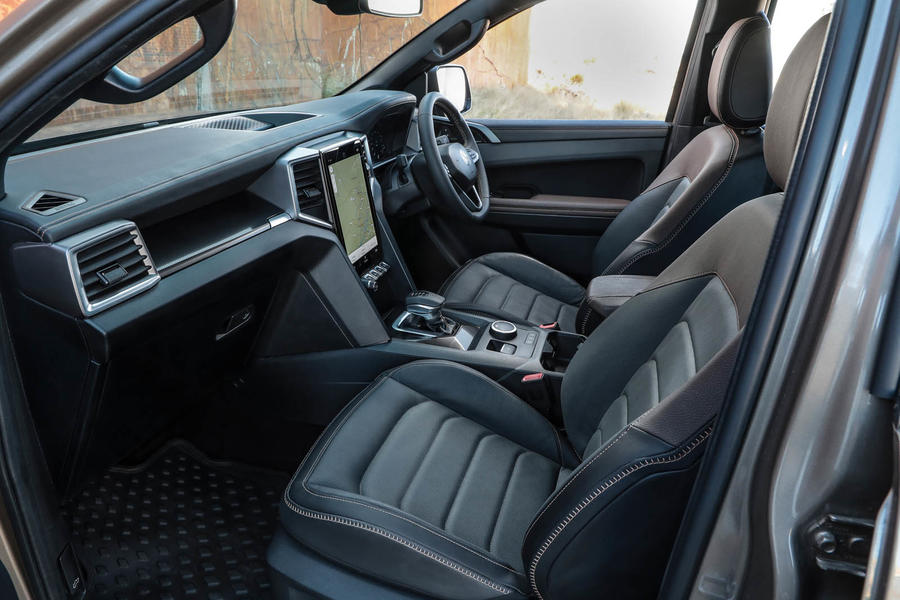 Inside, the Amarok shares elements of its dashboard facia, infotainment touchscreen (10.0in as standard, with upper-end models getting a 12in unit) and various controls with the Ranger.

However, Volkswagen has made a concerted effort to give the Amarok an appeal of its own, with features such as a uniquely styled leather-bound multi-function steering wheel, digital instrument graphics, centre console switches and gear lever, as well as different materials to those used by the Ford.

The new model receives its own uniquely upholstered seats to give the Amarok what Kirzinger called “typical Volkswagen properties”. Both the Aventura and Pan-American variants receive seats with 10-way electric adjustment as well as a Harmon Kardon sound system.

The infotainment functions are controlled by Ford's Sync4 operating system but with Volkswagen-specific graphics, while the manual handbrake of the old model is replaced by a new electric hand brake function.

The new Amarok will be produced with three engines in seven different power outputs, some but not all shared with the Ranger.

They include a 2.0-litre four-cylinder diesel unit developing 148bhp and 228bhp in single turbocharged form, as well as 201bhp and 207bhp in twin-turbocharged guise.

A turbocharged 2.3-litre four-cylinder petrol engine with 298bhp will also figure from the start of UK sales later this year.

There are four different gearboxes: five-speed and six-speed manuals and six-speed and 10-speed automatics. The latter comes as standard with the most powerful 2.0-litre diesel, the V6 diesel and the 2.3-litre petrol.

As with its predecessor, the new Volkswagen pick-up comes with a standard 80-litre fuel tank. Meanwhile, the capacity of the Adblue tank for the diesels has increased by 13 litres to 19.3 litres.

Buyers will also be able to choose between two different 4Motion systems dependent on the engine: one offering part-time properties based on the driving conditions, the other with permanent properties and a two-speed electromechanical transfer case for added traction and ability in off-road terrain. 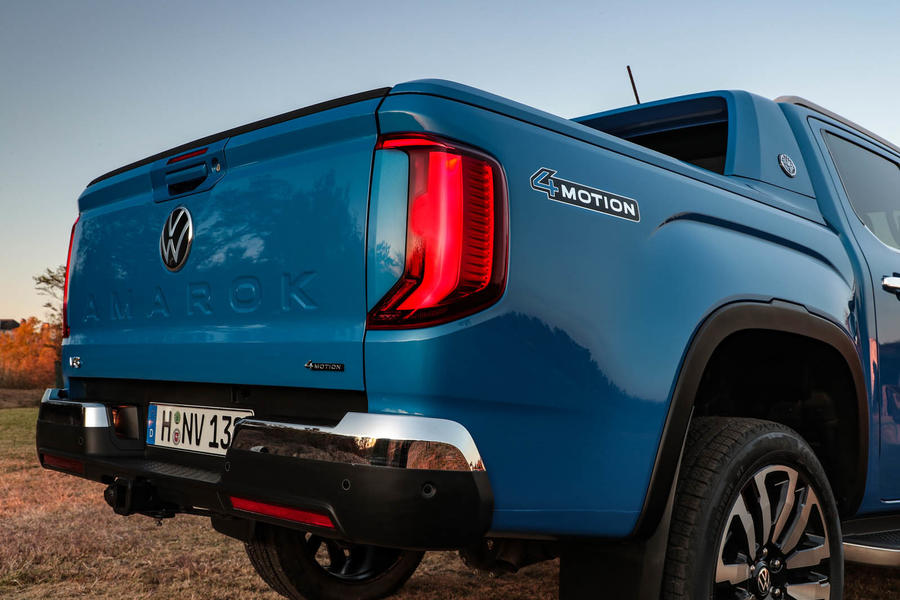 Helping to extend the Amarok's off-road capability is a considerable increase in fording depth, from 500mm to 800mm.

Towing capacity has also been increased to a maximum of 3500kg.

The new Amarok features a double-wishbone front and a beam-axle rear with leaf springs – the same set-up used by the Ranger.

As with the original Amarok, the rear shock absorbers are mounted outboard of the chassis rails to free up space and provide what Lars Krause, Volkswagen Commercial Vehicles' marketing boss, describes as “more car-like” properties than rival trucks that use inboard-mounted dampers.

“The new model builds on what we established with the original model in terms of performance and dynamics. It’s a car that’s equally at home on the road driving to dinner as it is off-road on the way to a construction site,” said Krause.

To differentiate the driving properties from the Ranger, the new Amarok receives its own unique steering tuning.

The Aventura model also adopts individual suspension tuning, with springs and dampers that differ from those of the top-end Ranger.

Production of the second-generation Amarok is scheduled to start at Ford’s Silverton plant in Pretoria, South Africa, in September.

Meanwhile, the original Amarok will continue to be produced at the Volkswagen plant in Pacheco, Argentina, for various South American markets.

Log in or register to post comments
Just Saying 7 July 2022
Not really up on my pick ups. So I'll keep it short.
The luxury cabin will appeal to a few new customers methinks. Probably never see the true off road capabilities, a bit like 90% of Range Rover owners!
FastRenaultFan 7 July 2022
Nothing special there just VW being VW. In fact I would go as far as to say that the last model was better looking.
You would miss Mitsubishi and there pick ups. At least Mitsubiahi tried unlike VW . I suppose Isuzu are still there somehow.
Gerhard 8 July 2022

This is VW being Ford, well actually is a Ford with VW 'tailoring'... VW just doens't want to admit it's using Ford cars...again.

Not really that much Volkswagen in the Amarok is there,all the engines are Ford units and it's built in the Ford plant in South Africa,I suppose that it the opposite of the Ford Torneo Connect which is a VW Caddy with the Blue Oval screwed on and built in the VW factory in Poland. So really all this collaboration does is further reduce consumer choice