BACK TO ALL NEWS
Currently reading: Volkswagen Phideon - would China's Phaeton work in Britain?
UP NEXT
Are disabled people being left behind by electrification?

Due to high demand in China, Volkswagen has resurrected its Phaeton under a new name, the Phideon. We drive it in the land of the Red Dragon
Open gallery
Close

This is the Volkswagen Phideon. No, you can’t have one. Not unless you live in China, in which case, fill your boots.

You can’t have one because it's the new Phaeton, if you like – the contradiction that was the people’s car not built for the people. The car that was a rip-roaring success story, in two places, at least: China and Wolfsburg.

Wolfsburg, home of VW, misses out this time. Although it is mostly German-developed, the Phideon is a car for China and China alone. They like big saloons in China, you see. Mostly black, often ugly. Some 60% of Bentley Flying Spurs are sold there. That’s why they liked the Phaeton.

There’s some Bentley beneath the Phideon, VW says. The Phaeton was a technological showcase for VW and only VW. The idea of it was conceived by the chairman of the supervisory board at the time, Ferdinand Piëch, who, you might recall, was a bit of a stickler for things. 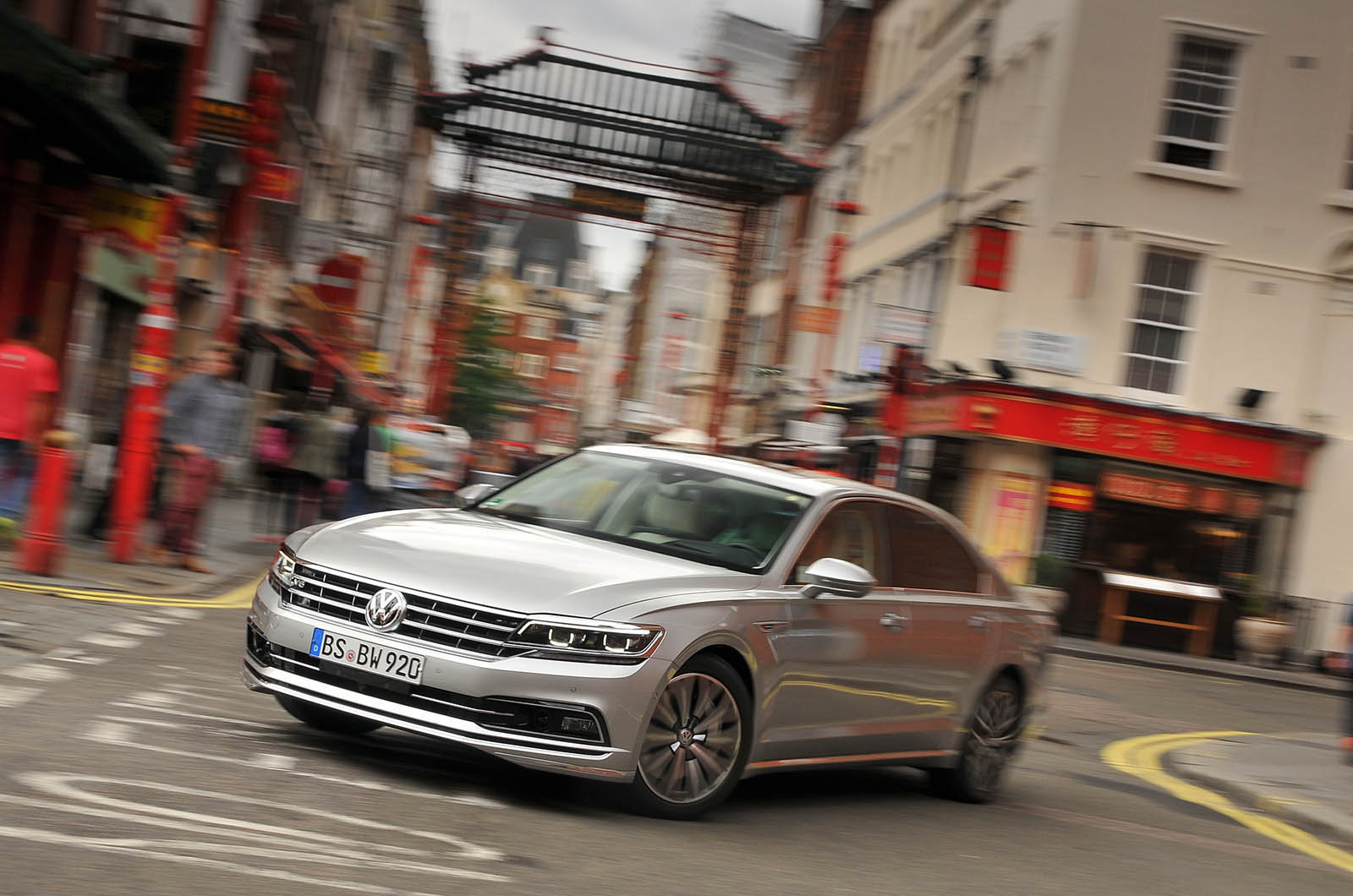 He wanted VW to build a luxury car that, among other things, could be driven all day at 186mph (300km/h) when it was 50deg C outside, while the air conditioning kept the interior at a steady 22deg C. And, no question, the car he conceived was massively impressive.

Piëch was, it’s said, partly motivated by the arrival of the Mercedes-Benz A-Class. Annoyed about the makers of the S-Class muscling in on Volkswagen’s territory, he decided Volkswagen should do the same in reverse. So he made a great car – and you all bought S-Classes anyway. Except in China, where preconceptions about badges mattered less at the time and any big, technically sophisticated European car could be a hit.

The Phaeton’s popularity there explains why, when the time came to replace it, the glass-fronted factory in Dresden was quietly forgotten and Volkswagen’s Chinese partner, SAIC, was engaged to assist in the development – although given that most of it was completed in Germany, the majority of the work rested with VW. Phideon assembly will be at the VW/SAIC Anting plant in Shanghai.

Which is why they said: “Go to Chinatown, Prior, the one in London, in the Phideon we’ve got hold of, and have some photographs taken of it.” 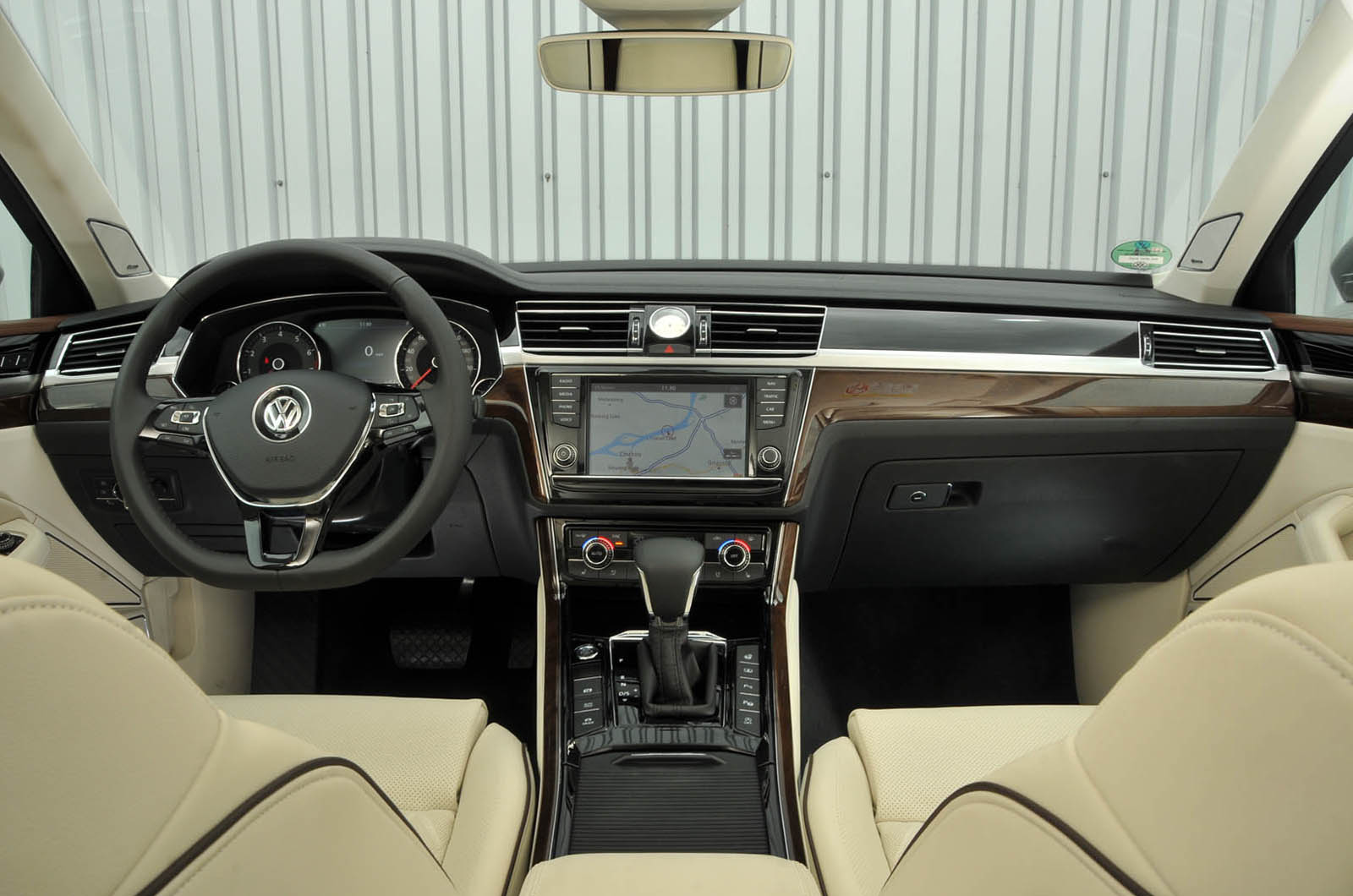 Fabulous, thanks fellas. Because if there is one thing I know about Chinatown, it’s that it is not the ideal location for a car photo shoot at lunchtime on a Monday, because it is both pedestrianised and full of people going for their lunch.

But we’ll be able to get close enough for a bit of flavour, reckons photographer Bradshaw – although not with enough time for actual flavour, which is a shame – and London is, after all, the kind of busy, bustling city that China’s urban areas specialise in. Although if my experience of Beijing is anything to go by, driving standards are even worse there than they are in London.

In a way, then, it’s as good a chance as we’ll get to see the Phideon in close to its natural habitat. Not that it feels terribly unusual; if globalisation of the industry has done anything, it has left luxury cars designed for a market 10,000 miles away feeling remarkably like luxury cars that could be sold anywhere. Were it not for the fact that the satnav insists we’re halfway between Hangzhou and Wuhan, you could be in any big, left-hand-drive Volkswagen. Which is, presumably, precisely why the Chinese liked the Phaeton in the first place.

Mind you, material fit, finish and appearance are better than those of most Volkswagens. Tolerances are millimetre-perfect, and two materials trying to approximate wood and aluminium respectively feature prominently. I couldn’t tell whether either is actually wood or aluminium (I suspect the former is but the latter isn’t, given how shiny and knurled its finish is), but in China they like conservative big cars with conservative interiors and that’s what they’ve got here. There’s ample room in the front, too, on broad, comfortable seats, and a very Volkswagen, very logically laid-out dashboard. I’ll come to the back in a minute. 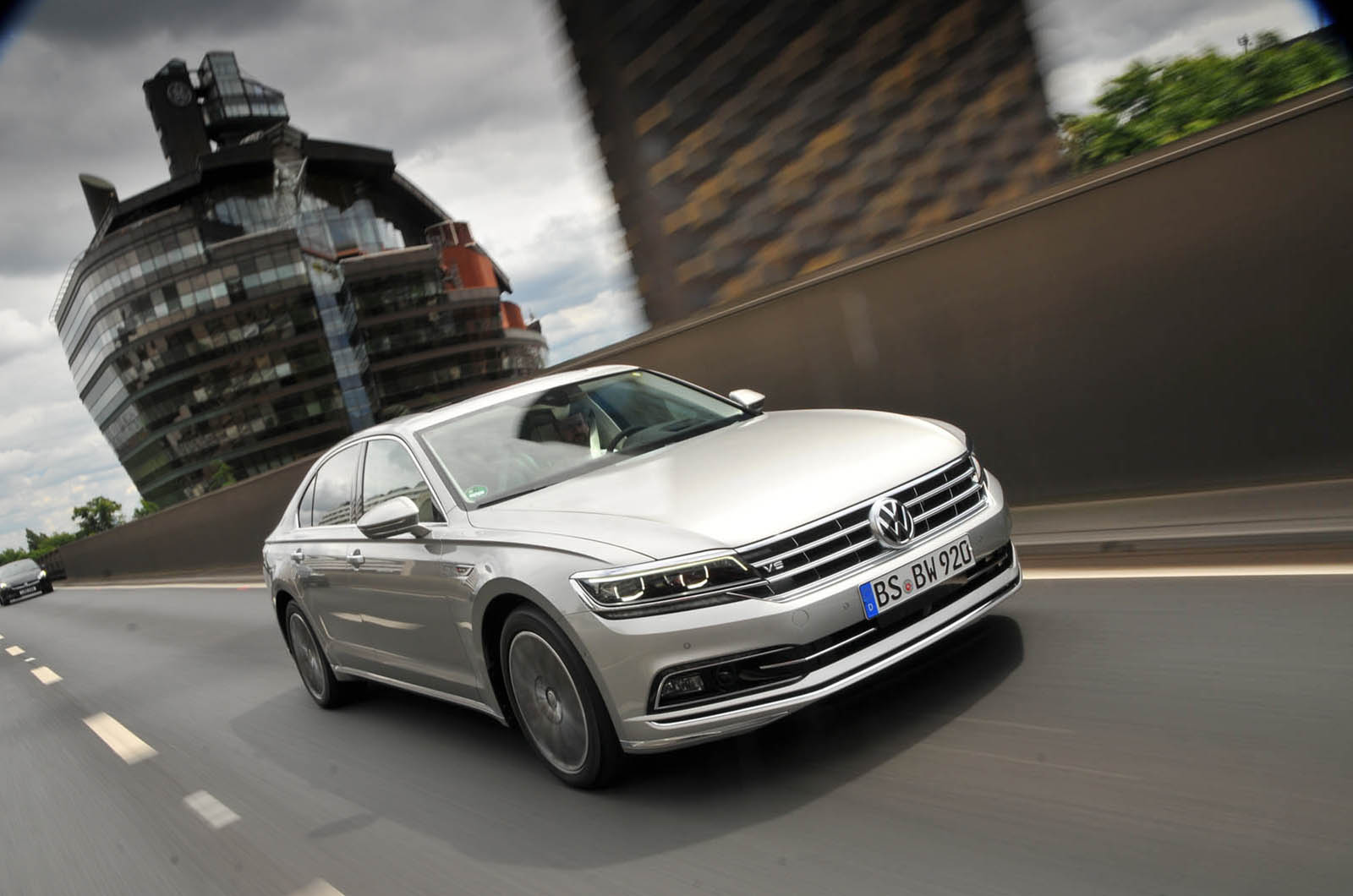 VW makes a fairly big thing of the Phideon’s features. It’s the first car to be based on the firm’s new Modular Longitudinal Matrix (MLB) platform, it has a 296bhp 3.0-litre V6 petrol engine and 4Motion four-wheel drive in this guise (a frontdrive 2.0-litre version can also be had and a hybrid will come later, but no diesels) and it’s the first VW to have a camera-based night vision system – although given that we’ve only got a few hours in the car, it’s a week after the longest day of the year and we’re heading to one of the most brightly lit areas of one of the most brightly lit cities on the planet, assessment of that particular feature will have to wait until another time.

Push the button. Start the Volkswagen. Listen. I can hear a plane on its final approach to Heathrow but not a great deal in the way of an engine. Which is good. The gear selector for the eight-speed automatic gearbox is one of those old-school items that actually moves between slots and slips into Drive easily. And we’re off.

Well, this is… expected. There’s a just-right amount of creep as you ease off the just-right weight and feel of the brake pedal. The throttle pedal is large and – guess what – just right in its weight and response. The big engine hums away in a fashion that’s only matched in its imperceptibility by the gearchanges. Almost. You get less sense of integrity and technical sophistication here than you did in a W12 Phaeton – less occasion, certainly, although the Phaeton wasn’t exactly big on drama either – but if you’re looking for traditional big-saloon-cum-limousine traits, you’ll find them plentiful. A BMW 7 Series or a Mercedes S-Class has more to keep you entertained and occupied, and both have interiors that feel notably more innovative and special than the Volkswagen’s, but I wouldn’t have expected otherwise. 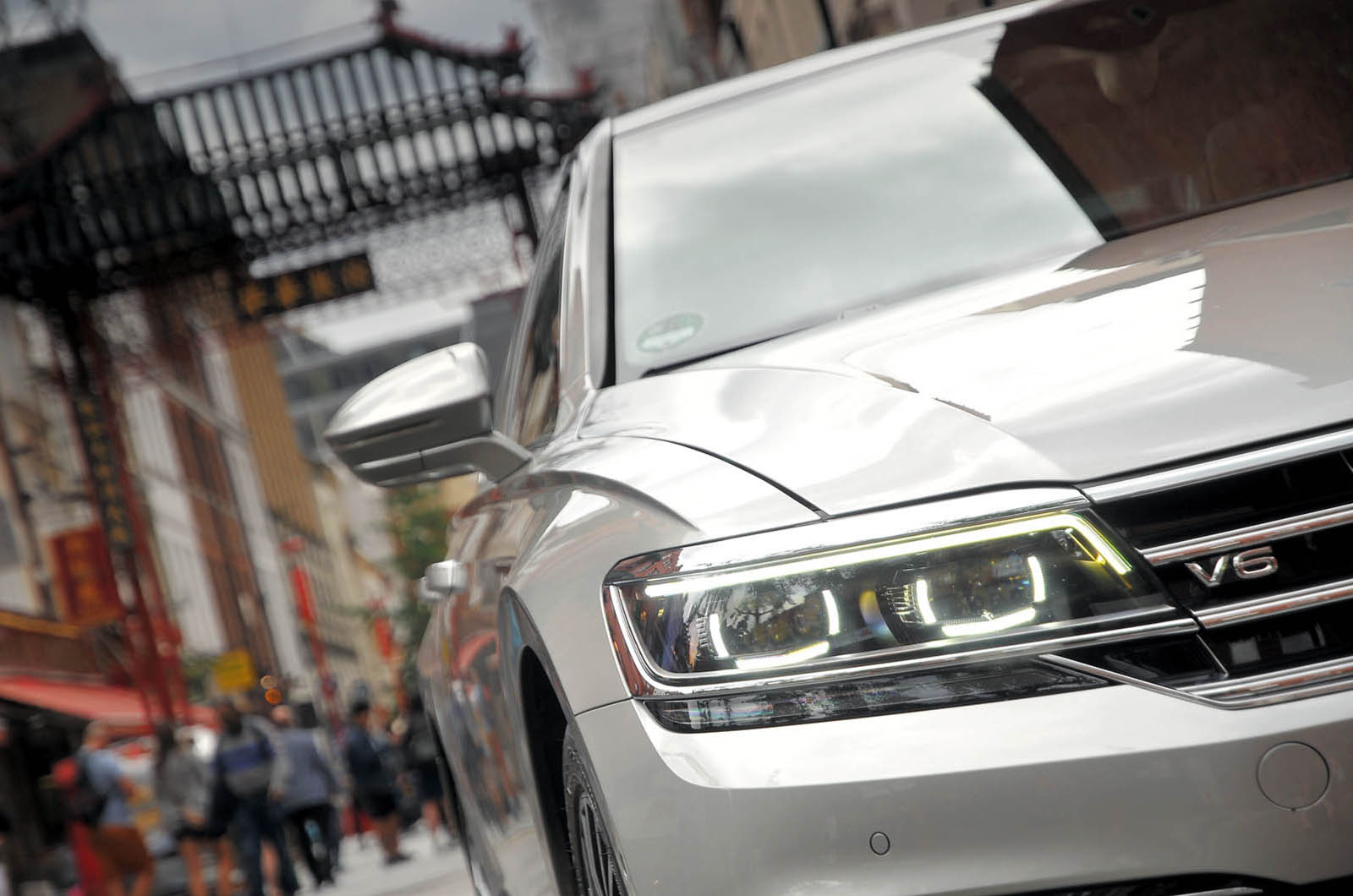 The air-sprung ride soothes away most surface imperfections, although, like most air-sprung cars, if the suspension is already in any way loaded and you find a pothole, there’s some hollow, harsh ‘sproing’ to its response. (No idea if that’s a technical word or not, but somehow I think you’ll get what I mean. Imagine sitting on a pressurised plastic water butt and whacking it with a rubber mallet.) But it’s comfortable enough, this car.

And – as I discover time and again when making turns and manoeuvres of dubious legality around the periphery of Chinatown, the turning circle is excellent. Visibility isn’t bad, either. VW says the styling suggests that the future of the Passat is hinted at here, which is no bad thing. Not outlandish – when is a Passat? – but there’s a bit more aggression and edge to it.

Plus, Londoners with Chinese roots know what it is. It’s a pretty rare thing when people take selfies of themselves with Volkswagens in the background, or point animatedly at a VW saloon car, but as much as Londoners show interest in anything other than their own business, they show interest in the Phideon. I’m fairly busy inside trying not to upset couriers, van drivers and cyclists, but our photographer and an assistant are pretty busy fielding questions. Yes, it’s coming to China in the third quarter of this year. Yes, it’s built there. And yes, it’ll cost the equivalent of £115,000.

In terms of interest, it’s like doing a shoot in a supercar, only without the massive inconvenience of being unable to see anything or turn around, or having to deal with an obstinate low-speed clutch and scraping the wheels at every other kerbside.

The Phideon is a big car at 5.05m long and 1.87m wide, but it has such easy, smooth steering and it turns so readily that it’s pathetically easy to drive, even in these busy conditions.

But, still, a lot of Chinese executives only experience it from the back seat, so I do too. There are three seats back here, but the centre will mostly be used as an armrest. The big unit swings down with controls for the seats (massage, heat, cool, not much recline), audio and climate control. There’s a couple of inches of spare head room and about half a foot of knee room.

There’s a table mounted to the back of the front passenger seat, too, although its finish is on the shiny side. Material quality is the same in the back as it is in the front, which means it feels meticulously well put together, albeit from slightly lower-grade materials and with less fascination than an S-Class or 7 Series or even the VW Group’s own big executive car, the Audi A8, which, for the most part, the VW undercuts a bit.

It’s no bad place in which to spend time, though. Noise levels are just as low as they are up front, but the ride has a touch more intrusion, because you’re seated closer to an axle. It’s a good car.

Would it work here? I doubt it, which is why Volkswagen won’t bother offering it to us. A VW’s badge marks it out as premium in the supermini or pick-up segments, but not when it’s up against genuine luxury rivals. So just know that the Chinese keep their version of the Phaeton but that we’re not really missing out.

If it's true about Piëch what

If it's true about Piëch what he thought of the A-class and the reason for the Phaeton, then his thinking is wrong, surely A-class was the answer to the 1 series and VW's own Audi A3 etc..
Anyway in the reverse no one in their right mind would but such a high price top end VW. Doesn't work, it may work in China, but it has been proven to not work in Europe especially in the UK.. makes great taxis though ,,,,
Citytiger 31 July 2016

I think they are confused

There’s some Bentley beneath the Phideon, VW says.

What they really meant is that there is some VW beneath the Bentley, which is the exact opposite..