BACK TO ALL NEWS
Currently reading: Volkswagen Beetle to be reborn as a pure electric four-door
UP NEXT
UK EV charging network to improve after "horrible" summer

Volkswagen Beetle to be reborn as a pure electric four-door

A revolutionary new Volkswagen Beetle is under consideration and, if given the green light by VW chiefs, it will adopt a battery-powered electric powertrain.

It will also move away from its trademark two-door bodystyle to a four-door arrangement and could even use the rear-wheel-drive characteristics of the original ‘Type 1’ Beetle of 1945 (below picture). The model would be based on VW’s flexible electric vehicle architecture, MEB, which will underpin the car maker’s range of electric models under its new ID badge. The first of these to arrive will be the ID hatchback next year.

VW has already confirmed that the current Beetle, which has been on sale since 2011 and is the second generation since the iconic car was revived as a front-wheel-drive car in 1997, will not be directly replaced once production ends next year. VW UK has already stopped taking orders.

However, VW boss Herbert Diess is keen to introduce a greater number of “emotional” cars to VW’s range alongside its more standard models. As the firm’s most storied nameplate, the Beetle is considered a strong contender for this role. The first “emotional” model will be the ID Buzz microbus (below). Inspired by the classic camper van, it is scheduled to arrive in 2022, before which VW will launch its more mainstream electric vehicles. In additionto the ID hatchback, there will be production versions of the ID Crozz SUV and ID Vizzion saloon, both previously seen as concepts, and a larger electric SUV is also due.

VW design boss Klaus Bischoff said the company must focus on producing the bigger-selling electric cars before making a decision on a Beetle EV and other models: “Our duty is to get the volume [ID] models under way. These cars have super-complicated technology and if you do too much, it’s an overload. Then we [can] move into more exotic cars and the field of emotion.”

On the possibility of a zero- emissions Beetle, Bischoff said the packaging advantages of the MEB platform could enable VW to broaden the appeal of the model by offering more space and comfort while retaining the iconic shape: “The Beetle of today is a very attractive two-door coupé or convertible, but it is limited in the amount of cars that it can sell because it’s a niche.

“If you look at MEB, the shortest wheelbase [possible] is the ID [hatchback]. If you took that and did the Beetle on it, you have plenty of room so there’s no compromise in functionality any more. So it could be a very attractive car.” 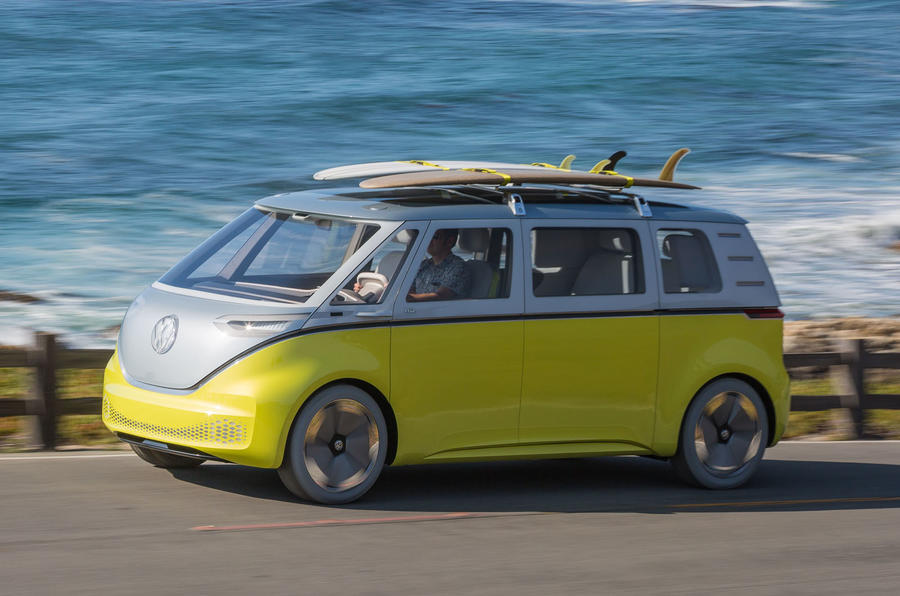 Bischoff confirmed that he has already made a sketch of how a four-door Beetle on the MEB platform might look, but added it would be two or three years before a decision to approve such a car for production would be taken.

Although the Beetle EV would be derived from the ID hatchback’s underpinnings, Bischoff did not think there would be a danger of the two models competing for the same customers: “It has always been the culture at VW that there’s enough room for two or even three [in the same segment].”

Diess has dropped hints about an electric Beetle in the past: “If we wanted to do a Beetle EV, it would be much better than today’s model, much closer to history, because it could be rear-wheel drive.”

Referring to the MEB tool kit providing a perfect basis for ‘emotional’ concepts, Diess said: “We have a good chance on the electric side. You can do derivatives efficiently. We have a very flexible platform. We can do nice things: rear-wheel drive, front-wheel drive or all- wheel drive.”

Diess, who was appointed boss of the entire VW Group earlier this year, described the group’s strategy as “the most far-reaching electrification initiative in the car industry”.

An electric Beetle looks promising and plausible on several grounds.

First, given the global successes the new-gen Mini and latter-day Fiat 500 have become, you can understand why VW should want to do the same with its best-remembered model.

The fact that the first and second attempts at a ‘new’ Beetle failed must give VW pause, but I reckon Klaus Bischoff is quite right that using rear-wheel drive for this third proposal would give it a better chance. And the residual greenness of electric underbits make a better link with the past than the most recent ‘new’ Beetle, which tried too hard to be a cheap Porsche.

To me, it’ll be about styling success. If Bischoff and his team of designers can be as effective at recalling the original Beetle as they have been with the ID Buzz recalling the old Kombi van, I could see an electric edition becoming a real hit.

Volkswagen to sell EV home chargers ahead of ID launch

I feel something VW missed

I feel something VW missed despite getting the new Beetle to market before the Mini was customisation. the easiest thing to customise was which type of flower you wanted in that vase. The 500 came out donkeys years after the Beetle came back and FIAT reralised the same thing and seems to be selling loads and like MINI hasn't changed the design that much. I'd like to see ID Beetle offer the retro wheels, retro paint jobs and a variety of colour options as part of the character of the car so you can individualise your car more from the outset.

Packaging could be an issue.

I spot compromised luggage space. The motor/s can be tiny however, the battery packs need room. I know that the Beatle is more of a lifestyle vehicle. But four doors signals practicality.

Packaging could be an issue.

I sspot compromised luggage space. The motor/s can be tiny however, the battery packs need room. I know that the Beatle is more of a lifestyle vehicle. But four doors signals practicality.