BACK TO ALL NEWS
Currently reading: Updated: More details on new V8-powered Ferrari Roma
UP NEXT
EV start-up Aehra to launch “ultra-premium” SUV and saloons

The new model, unveiled in the Italian capital and set to go on sale next summer with a starting price of around £175,000, shares some underpinnings the Ferrari Portofino drop-top but has all-new styling – including active aerodynamics – and a revamped and upgraded powertrain.

Described by the Italian firm as an all-new model, Ferrari commercial chief Enrico Galliera said it represents "a new gran turismo". "Nobody can question this is a sports car," he said, "but it's also very elegant."

Galleria said that the Roma has been designed to appeal to potential customers who would "love to drive a sports car or a Ferrari but might be a bit afraid of one." He added: "This car will attract people who have never driven a sports car, who drive something less aggressive and now want something a bit more extreme."

The fifth new model Ferrari has launched in 2019, the Roma is termed a 2+ coupé, thanks to the option of two small seats or a storage compartment in the rear.

The Roma has a retro design that Ferrari design chief Flavio Manzoni said was inspired by classic front-engined Ferraris from the 1960s, such as the 250 GT Berlinetta and 2+2. Despite that, Manzoni said the design is intended to look to the future. "We don't like the nostalgic approach," he said. "We like to innovate. The idea was to develop a car that would be perfect to take to the track and then to drive to the opera."

The Aston Martin Vantage and Mercedes-AMG GT rival features a bold, new-look grille - described as a porous surface – at the end of its elongated front bonnet, which Manzonio said was inspired by the simplicity of Formula 1 cars. There are also sharp lines over the wheel arches and a notable bulge in the front bonnet. 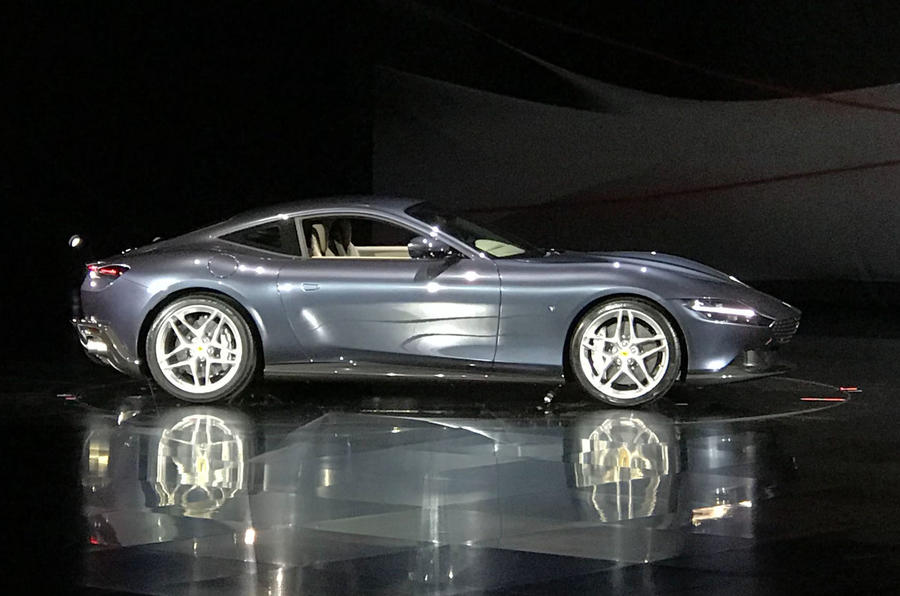 The Roma is powered by a revamped version of the turbocharged 3.9-litre V8 engine used in the Portofino and elsewhere in Ferrari's line-up, albeit using the eight-speed dual-clutch gearbox that was introduced on the SF90 Stradale.

Further powertrain upgrades include reshaped camshafts and an engine speed sensor which is said to allow maximum revs to be increased by 5000rpm. A new Euro-6d-compliant petrol particulate filter has been fitted, but Ferrari guarantees that it will "not compromise driving pleasure".

Ferrari also says it has completely redesigned the exhaust system to incorporate petrol particulate filter technology, ensure that the Roma meets the latest emissions requirements and enhance its sound.

Notably, the Roma has a dry weight of just 1472kg with lightweight options fitted – around 80kg less than the Portofino's dry weight. The gearbox alone weighs 6kg less than the seven-speed unit in the Portofino and is claimed to offer reduced fuel consumption, faster shifts and enhanced comfort in urban driving situations. With the Roma's kerb weight of 1570kg, Ferrari claims a best-in-class power-to-weight ratio.

As well as the active rear wing, the Roma features the latest version of Ferrari's vehicle dynamic systems, including the first application of its latest Side Slip Control. There are five driving modes and a Ferrari Dynamic Enhancer function that can control the yaw angle of the car by hydraulically adjusting the brake pressure.

The Roma measures 4656mm long and 1974mm wide, making it marginally shorter and narrower than the Portofino, while both models feature a wheelbase of 2670mm. 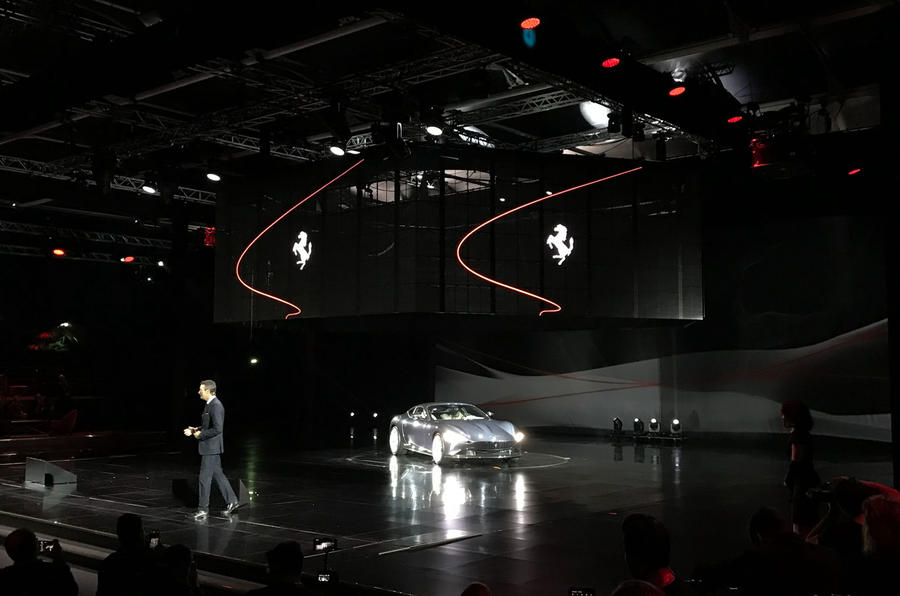 Inside, the car features two separate 'cells' for driver and passenger, with space for a small rear seat or storage behind each. The driver is separated from the front passenger by a central divider, in what Ferrari calls "an evolution of the dual-cockpit concept that embraces the entire cabin rather than just the dashboard, as was previously the case". The steering wheel is an all-new design that hosts all the main driver settings to ensure constant focus on the road ahead.

The traditional analogue speed and rev counter dials have been replaced by a 16in curved screen mounted behind the wheel, while a centrally mounted, portrait-orientated 8.4in unit displays infotainment functions. There's also a separate touchscreen for the passenger. 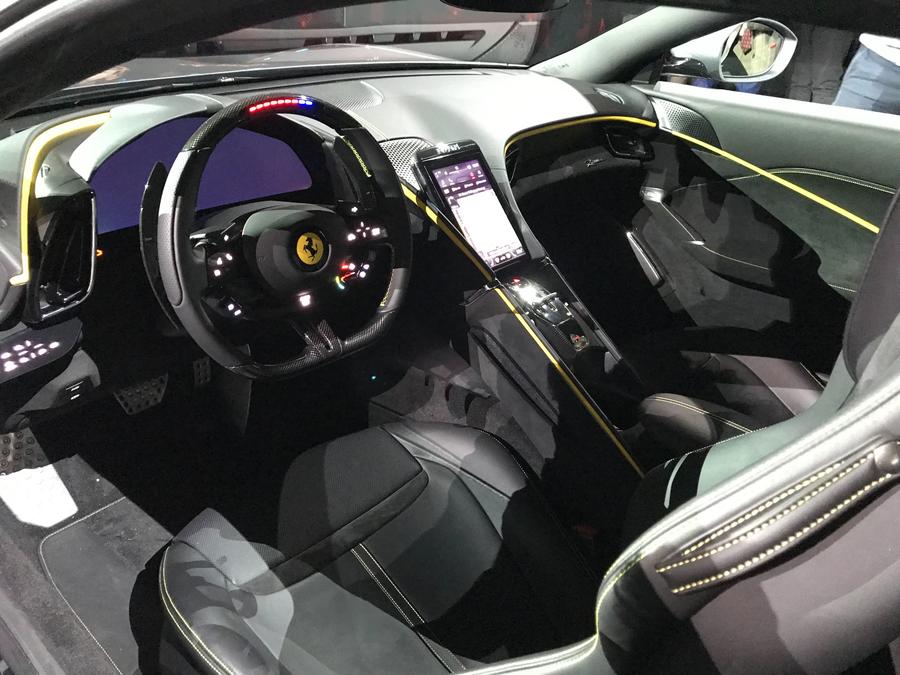 The Roma's boot capacity of 345 litres is roughly equal to that of the AMG GT and Vantage.

According to Ferrari, the Roma was named after the Italian capital – where it was revealed at a launch event – because it “is a contemporary representation of the carefree, pleasurable way of life that characterised Rome in the 1950s and 1960s.” That implies that the machine will focus more on everyday usability and relaxed driving than being intended as a long-distance grand tourer.

The decision to introduce a new nameplate, rather than just producing a hard-top version of the Portofino, has likely been taken to target the car at a new audience. By turning the car into a 2+ coupé, it can likely broaden its offering at the entry level of its range.

Earlier this year, Ferrari’s marketing chief, Enrico Galliera, told Autocar that the firm would become “less predictable” and said that at least one car it would reveal this year would be “in a new segment”. Ferrari's current focus is on increasing revenues rather than strictly increasing sales.

Ferrari tech boss on EVs, V12 and next LaFerrari

The studio shots make them look a bit wierd to me , kinda squashed down in the corners of the bonnet.

Wheres in the shots outside, They look pretty good

Will be watching out for one, in the flesh is always different. May also be very colour dependant.

One of the cleanest, least

One of the cleanest, least-fussy and uncluttered designs to appear for quite a while. A bit like what Aston was doing with the gorgeous, previous-generation cars (DB9, V8 Vantage, etc.), and what Ferrari used to do. Possibly a return to the classic, front-engined Ferrari GT (albeit without a V12) at a price point Ferrari used to play in.