BACK TO ALL NEWS
Currently reading: Update: Mystery Volvo P1800 mule is petrol-powered, not EV
UP NEXT
Ford to revive more historic model names for new cars

Volvo was seen testing a mysterious disguised prototype version of its classic P1800 coupé last week. Contrary to speculation that it was an electrified restomod, Autocar has now learned that it's petrol-powered.

The source of the original images, taken the company's Hällered testing ground near Gothenburg in Sweden, has contacted Autocar to confirm the P1800 actually has a centrally mounted exhaust. It's just visible in the blurry rear shot provided (below).

A short video sent by the source (who has chosen to remain anonymous) reveals that the prototype's four-cylinder engine sounds similar to that of the original coupé. The exhaust mounting is in a different location to the original, however.

The camouflaged car sports a number of key changes over the original P1800. Wider wings, a revised front apron with a new intake and modern wheels and tyres are visible behind the disguise. Although not officially confirmed, rumours suggest Volvo is looking to mark the P1800's 60th anniversary next year with a 'reimagined' model, but it's unclear if there is any low-volume production intent. 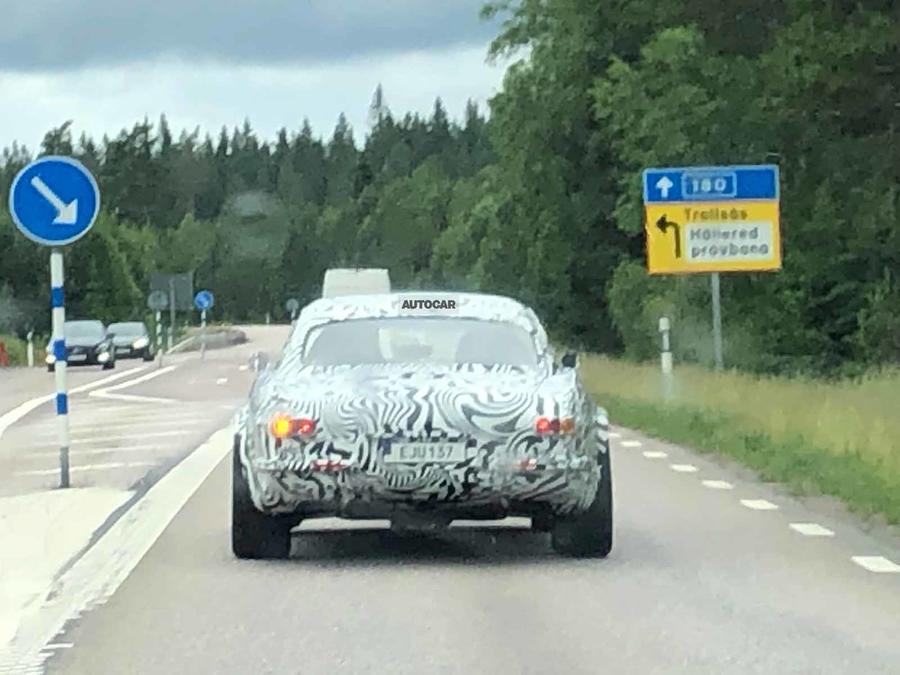 The car in question is registered as a red 1964 example owned by Mattias Evensson, head of engine development at Cyan Racing, the motorsport arm of Volvo parent company Geely.

Evensson purchased the car from Jonas Christian Dahl, the owner of the Polestar brand from 2004 to 2015, when it was taken under the wing of Volvo. Before that, the car belonged to the Polestar racing team itself.

The car's close ties to senior executives could mean it's a personal project or a one-off. However, the fact that the model has been seen road-testing in prototype-stage camouflage suggests there may be more to it.

When contacted by Autocar, a Volvo UK spokesperson declined to comment on the sighting.

The P1800 was a 2+2, front-engined, rear-wheel drive coupé produced from 1961 to 1973. With Volvo initially unable to produce the car itself, it was first built by Jensen in West Bromwich, England, using bodyshells made by Pressed Steel in Scotland. Production moved to Sweden in 1963.

The P1800 gained fame through the hit TV series The Saint, in which one was driven by lead star Roger Moore.

And you thought of us, even though if we start earning $28k a month we might start earing into the profits you are making?  How incredibly selfless of you.  I'm going to look into it right away!!

There is a chap in my village who owns one of these in a pale, murky white.  I saw it a couple of days ago and it looks just as beautiful as it did all those years ago.

If Volvo started making these again, with electric drivetrains, they would have a sales success on their hands.  Might struggle to get through all the current regulations though!

No logic to this

Oddly enough I like it, but can't explain why.