BACK TO ALL NEWS
Currently reading: Twisted NAS-E is electric Defender for North America
UP NEXT
Hyundai and Kia raided over suspected diesel defeat devices

Thirty examples of 4x4 will be built by British Land Rover tuner; may be offered in the UK
Open gallery
Close

Twisted has hinted that the car will eventually be sold globally, but it's unclear whether it will be coming to the UK.

The NAS-E sports a short wheelbase soft-top bodytype inspired by the original NAS Defender. Sold in the US between 1993 and 1997, that car is now a collector’s item, with original examples regularly selling for more than £100,000.

The electric NAS-E is powered by a Remy BorgWarner electric motor, delivering more than 214bhp and 280lb ft of torque to all four wheels. For the NAS-E Plus, performance increases to 320bhp and 309bl ft of torque.

Supporting this is a distributed lithium nickel, cobalt and manganese battery pack with an energy storage system that uses four battery modules to maximise capacity. Range is 200 miles. 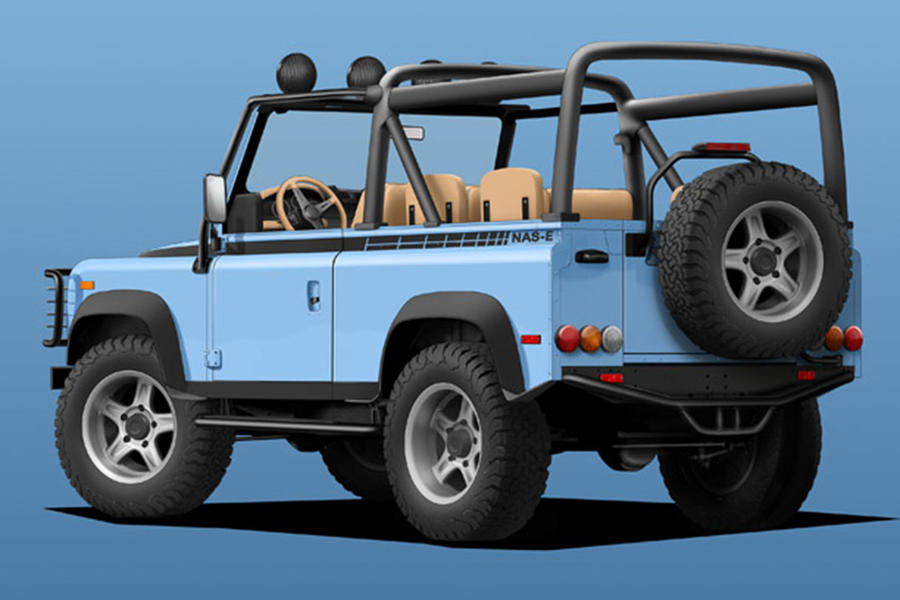 Buyers can choose from three colour options – Malibu Yellow, Yosemite Green and Tahloe Blue - each inspired by a California landscape. In the initial production run of 30 units, 10 will be produced in each colour.

The interior has been modernised with cream leather seats, a full infotainment system and a touchscreen for controlling the EV specifics, alongside a silver-finished Twisted sports steering wheel. A roll cage and Bimini hood are standard.

Buyers who opt for the NAS-E Plus gain a brush bar, side steps, rollbar spotlights, black side sills and an exclusive body stripe decal.

“As the world moves steadily toward mass electrification, the Californian market has been missing a uniquely stylish electric 4x4 option," said Bruce Riggs, head of Twisted North America. "The Twisted NAS-E is the ultimate expression of the American coastal lifestyle.”

Each custom-built model will take nine months from the point of order. Twisted expects the first cars to be completed by October this year.

a quick look on YouTube will show plenty of EV defenders,,

I am fairy sure

that Electric Classic Cars from Wales have converted Defenders to full EV significantly cheaper than this..