7
Opulent off-roader is high on charm, even if it won't be around forever
Open gallery
Close

When Land Rover discontinued the Defender after 67 years, Twisted Automotive purchased 240 late-build cars straight off the bat. Adapting this British icon to be faster (this one does 125mph) and far, far more luxurious (think floor-to-ceiling leather) has been the Yorkshire outfit’s stock-in-trade since 2002, and obviously without stock, there’s no trade.

Not long ago those 240 cars would have accounted for four busy years of production – the wholesale changes Twisted makes to both the oily aspects and the interior are wrought by a crack team of just ten technicians – but with customers now requesting for greater customisation, it’s now enough for six.

After that? Well, not every Defender that Twisted breathes on has to be box-fresh, and given that three in every four of these Solihull-built cars ever built are still in working condition… You get the picture. There’s also the potential to work on the all-new Defender, due in 2020 and recently seen testing on the public road, though founder Charles Fawcett is coy on the topic.

That, of course, is the future. The revised 110 Utility tested here is an exhibition of what Twisted can do for you in 2018. It uses the ultra-versatile 6.2-litre Corvette LS3 crate engine developing 430bhp, though you can have as much as 520bhp. On a ladder chassis? With worm-and-roller steering? Madness, you might justifiably ponder. But we know from previous encounters that Twisted can make this recipe work.

There are further upgrades everywhere you look (or rather, don’t look): differentials, prop- and driveshafts, a big-bore twin-exit exhaust, red-calipered Alcon brakes and, most recently, air suspension from Dutch firm VB Air. The last of those allows the body to be usefully lowered – car parks are a perma-problem from Defender owners – and Twisted’s cars also come with a full chassis underseal. 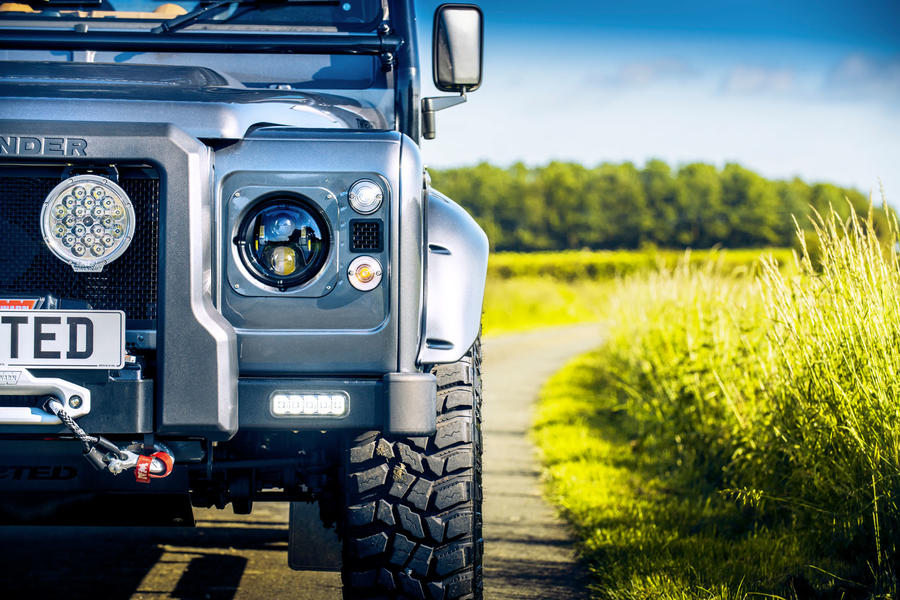 Considering the skunkworks setup at the Thirsk workshop, the quality of the interior is sensationally good. There are some hard – ‘working’, you might say – plastics along the dash but most are replaced by supple leather with arrow-straight contrast stitching. The seats are also a godsend: big Recaro buckets, the same you’ll find in a Mk3 Focus RS, upholstered in Alcantara to match the roof lining. Twisted has also modified the centre console and fitted a modestly sized Alpine touchscreen. It’s subtle enough, and although the world of ‘reimaged’ Defenders spawns some truly abominable interiors, this certainly isn’t one of them.

Out on the road this is a car to have parents hurriedly guiding their children back from the pavement’s edge. It’s a task made considerably harder by the fact these same blighters are the ones craning their necks to get a closer look. Part of the car’s presence is the result of wheel-spacers, which improve the turning circle compared to the standard Defender (it’s still substantial) but thrust the knobbly tyres out in full Armageddon style. People stare, and point, but the reactions are overwhelmingly positive. It’s still a Defender, after all.

Go beyond the bull-bars, light pods and the Cooper tyres, however, and you’ll see this is not some modified monstrosity. The sheet metal is just lovely – utterly smooth, unpretentious and with crisply contrasting rivets – and from the billet aluminium door handles to a simplistic grille and headlamp setup redolent of the Series Stage 1 V8 of the early eighties, it’s mostly very tasteful. In fact referencing that most badass of historic Defenders is an outstanding touch.

Elsewhere there are fewer indications of this car’s aftermarket affectation than you’d expect, but that’s where Twisted excels. In any case, the near-vertical windscreen and atrociously indirect steering (though the fitment of an smaller and more elegant Moto-Lita rim helps matters) never let you forget what car it is you’re driving, but then you wouldn’t want that.

If the car’s style does just enough get the nod from even ardent Defender purists, the driving experience is more amusing. Throttle response is a touch baggy and there’s a hiatus in the torque delivery as the six-speed auto lines up another ratio, but what theatre. And speed. Being naturally aspirated, this engine doesn’t hit its stride until the top of the rev-range, and even then its only Golf GTI hot-hatch fast, but that’s quick enough for a 2500kg Defender, thank you very much. Admittedly this isn’t the sweetest calibration, but it’s not bad, and sticking to the manual would make it even more involving and easier to ride this throaty engine’s torque.

Performance and a muscle-car soundtrack are a big part of the package but they’re not the only reason people you might spend Lamborghini Urus money on a vehicle with agricultural pedigree. Truth is, the manner in which Twisted’s revised suspension and soundproofing isolate you from the road is pretty mesmerising if you’re accustomed to a factory-spec Defender. Solid axles will never permit a ride to rivals that of a G-Wagon or Bentayga – not even close – but a decent motorway schlep is now more than tolerable. If you can cope with 15mpg, that is. 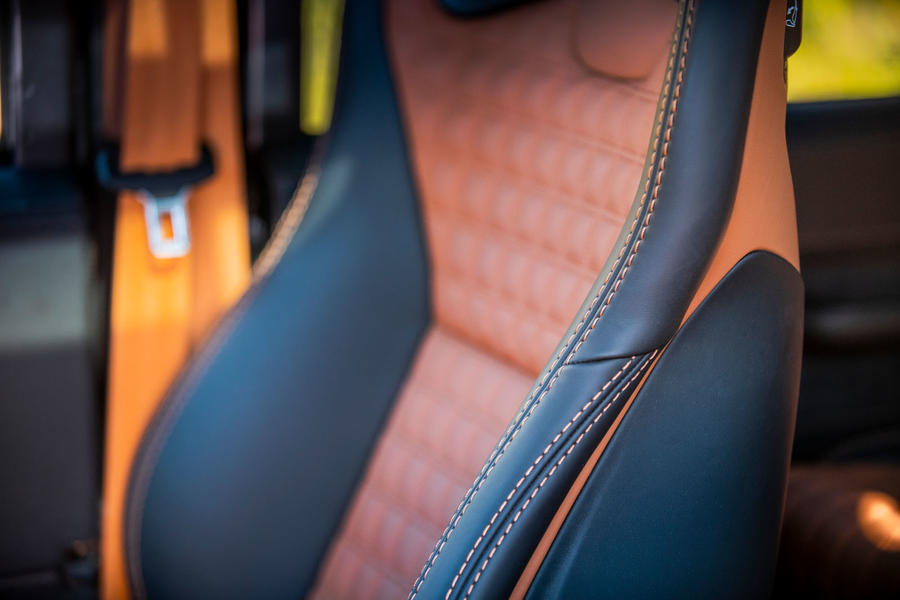 The new Mercedes-AMG G63 – now with rack-and-pinion steering and double-wishbones suspension at the front axle – wants little for character and is a considerably more polished device. If you’re looking at a Twisted then perhaps a Urus isn’t your cup of tea, but the fact remains: you can get a highly sophisticated, high-riding Lamborghini for the same money. And don’t forget about the Bentley Bentayga, which does luxury better than any of them.

But, ultimately, none are as likeable as this wickedly fun and remarkably opulent Twisted – or quite as high up the roster of endangered automotive species. 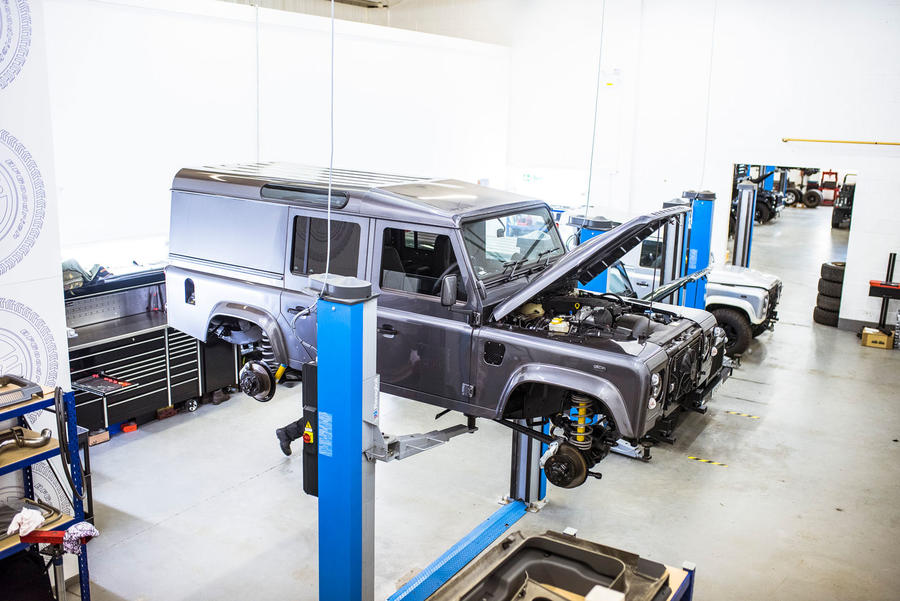 Omg!! It's looks just greate! But it's cost too much! Analogues are cheaper than it! Should I buy one? Not sure! As I have write prise is too much!

It’s good that someone is catering for Landie lovers with too much wonga!