BACK TO ALL NEWS
Currently reading: They don't Mackem like they used to: the Nissan Sunderland story
UP NEXT
New Lamborghini Countach: epic UK road trip in reborn icon

They don't Mackem like they used to: the Nissan Sunderland story

"When I first saw the Newbird, it all came flooding back – fondly,” says Peter Robinson, today a production supervisor at Nissan’s manufacturing plant in Sunderland, but back in 1987 a fresh-faced 19-year-old keen to make an impression in the trim and chassis shop.

At that time, there were 490 people working at the plant, which had opened just a year earlier, in September 1986, assembling one model, the Bluebird, in saloon and liftback forms. Today, with Sunderland’s total production output now exceeding 10.5 million cars, more than 6000 toil away across a much larger site building the Nissan Juke, Nissan Leaf and Nissan Qashqai.

Robinson, 54, is one of four factory veterans who I’ve headed north to meet. They’re the living embodiment of something very special: a great British (and Japanese) car-making success story whose next chapter (called Nissan EV36Zero) has begun.

But back to the Newbird that triggered so many memories for Robinson. In fact, like him and his long-serving workmates, this car is a bridge that spans Nissan’s past, present and future. In reality, it’s a 1989 Bluebird Liftback GS built at the plant and powered not by the 1.8-litre petrol engine it left with but by the battery, inverter and electric motor from a current-model Leaf, also built at Sunderland.

It was Nissan UK’s idea: a commemorative gift to itself celebrating 35 years of manufacturing, a period during which not only the Bluebird has left the Sunderland plant but also its successor, the Primera, the trendsetting Qashqai and the Micra, Note, Juke and Leaf – with honourable mentions for the Infiniti Q30 and QX30. 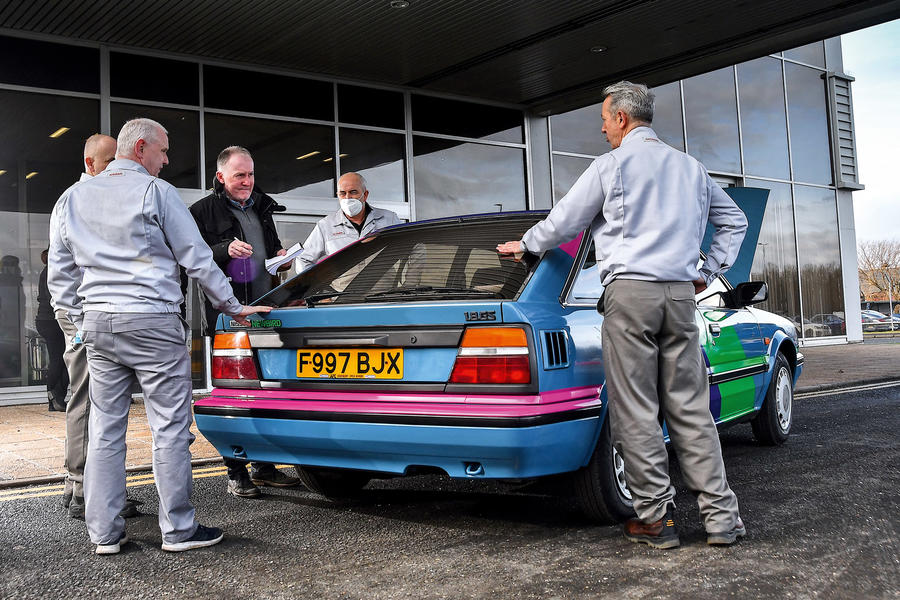 Although it was Nissan UK’s idea, the Newbird was engineered independently 15 miles down the road in Durham by Kinghorn Electric Vehicles, a family business that specialises in converting classic cars to run on battery-electric power. Can the Bluebird, the Newbird’s donor car, be described as a classic?

If you’re Robinson or one of his workmates who put it together, then clearly it is, yes. But if you’re not or you’re too young to remember the alternatives available at the time (which included the Austin Montego and Vauxhall Cavalier), you will just have to accept that it’s a classic in what it represents: proof that in 1986, Brits (or at least those in Sunderland) could build cars just as well as their colleagues in Japan and their opposite numbers in Germany.

True, dynamically speaking, the Bluebird lacked the poise of, for example, the Peugeot 406 and, aesthetically speaking, the boxy saloon in particular was no oil painting (in fairness, neither was the Ford Sierra). But buyers forgave it, focusing instead on its quality, reliability, specification and sheer value for money.

I’m reminded of the most important of these attributes by the brochure that George Kinghorn, the brains behind the Newbird, has tracked down on eBay and put on its Rachelle-trimmed passenger seat. “The Nissan Bluebird… probably the best built car in Britain,” proclaims the Daily Mail on its opening spread. Beneath, Nissan adds that the model has the lowest warranty claim rate in the UK. As my immediate neighbour’s still fit and healthy 21-year-old Sunderland-built Primera testifies, that same quality was passed batonlike to the Bluebird’s even more popular successor.

Nissan built a little over 187,000 Bluebirds between 1986 and 1990. The plant veterans recall that each one took two whole days to make.

It was hard, physical work. For example, the Liftback’s tailgate required three workers to manhandle it into position; ditto the saloon’s heavy, one-piece rear seat. The roof needed four workers to lift and place, as did the body sides, which, if not held securely in position by mole grips, could slide off. Around and under them, fellow workers busied themselves spot welding the car’s internal structure, often getting burned by the sparks in the process. 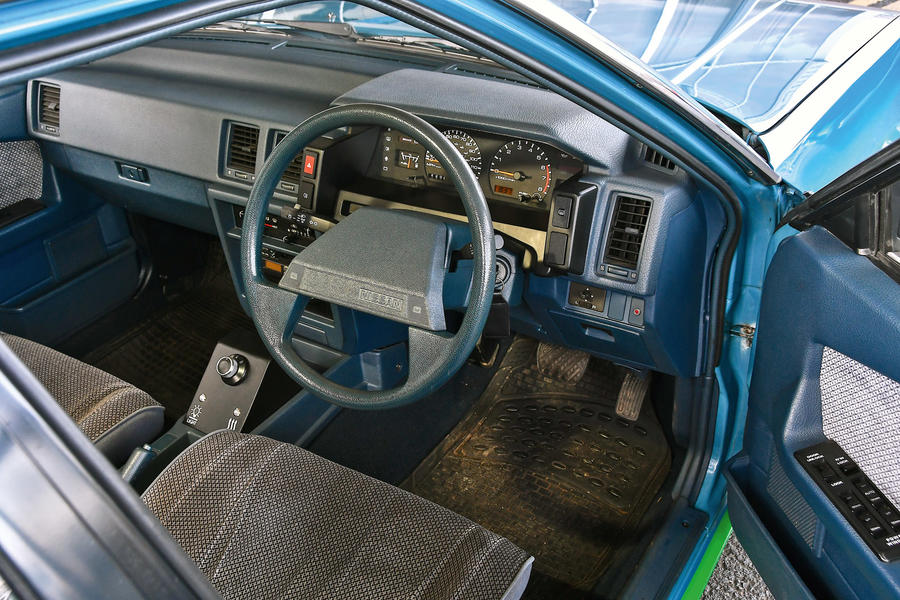 Meanwhile, inside the car, others trimmed the headlining to size with scissors, their aching arms raised aloft, laboriously fed wires from the front bulkhead to the rear and assembled the dashboard. Alongside the line, another gang wrenched open wooden crates, lifted out the fresh components, unwrapped them and passed them on to their frantic workmates, each under pressure to complete their designated job in 4.8 minutes.

“The noise, dust and fumes were intense, and everyone was working on top of and around each other,” recalls Robinson. “Fortunately, jobs are better organised today, with things like the body and chassis shops in separate buildings.”

This is my cue to see today’s production line for myself. Another plant veteran, Michael Harker, these days production supervisor on new models, is my guide. I will be visiting main assembly lines one and two, located in the original factory.

To show how the plant has expanded, Harker points to it on an aerial photo. It looks like two small sheds. Due to Covid-19 and that other disruptor, the global microchip shortage, output has been throttled back to 1000 cars per day, across two eight-hour shifts. To reduce the expense of keeping parts, everything arrives ‘just in time’. It means that on most days, there’s only one-and-a-half hours’ worth of stock available on the line.

The Leaf motors awaiting fitment are distinguished by their bright orange cables. The EV takes 10 hours to build. Around and above me, partially completed cars are slowly conveyed from workstation to workstation. I’m surprised by how quiet – relatively speaking – it all is. 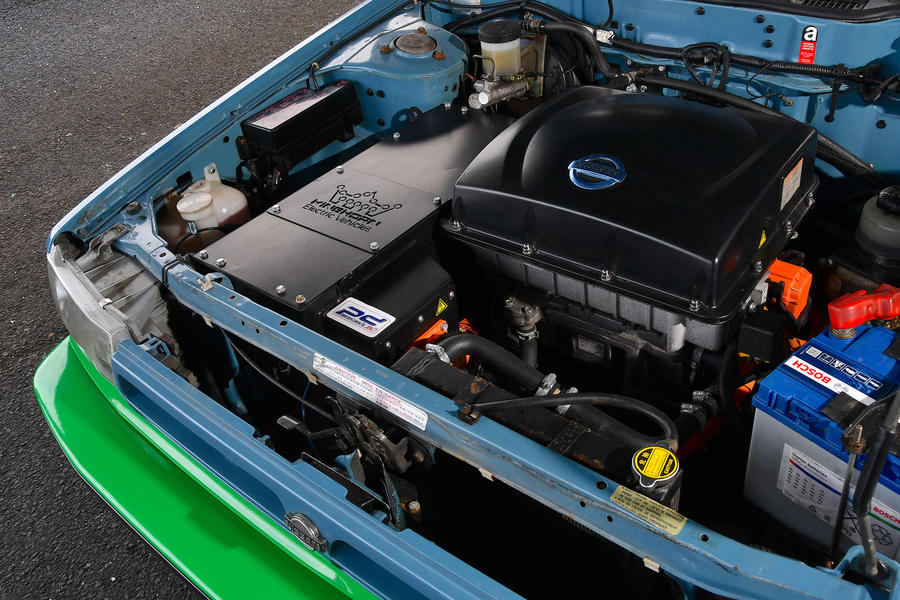 “We use battery guns that automatically tighten to the correct torque,” explains Harker. “They’re a lot quieter than the old air tools that required separate torquing by hand.”

He tells me how he and his fellow line workers had to alternately reach up, reach down, bend, stoop and generally exhaust themselves to assemble the cars. Not any more. Instead, as the cars go down the line, bellows raise or lower them to the correct height for the job. Not every job, though. I glimpse one worker crouched down, reaching under the dashboard of a Qashqai. “He’s fitting the pedal box,” reveals Harker. “It’s the worst job.”

Towards the end of the production line is the drenching booth, where each car is blasted with water to test it for leaks. The rolling road, where the engine or motor is put through its paces, follows next. Workers now surround each car checking its fit and finish before, in the calibration area, the driver assistance features are set up. The last stop is the underseal bay, where the car’s underside receives an extra dose of anti-corrosion treatment. A short road test and another made-in- Sunderland Nissan leaves the factory and the north-east’s manufacturing success story turns a new page. 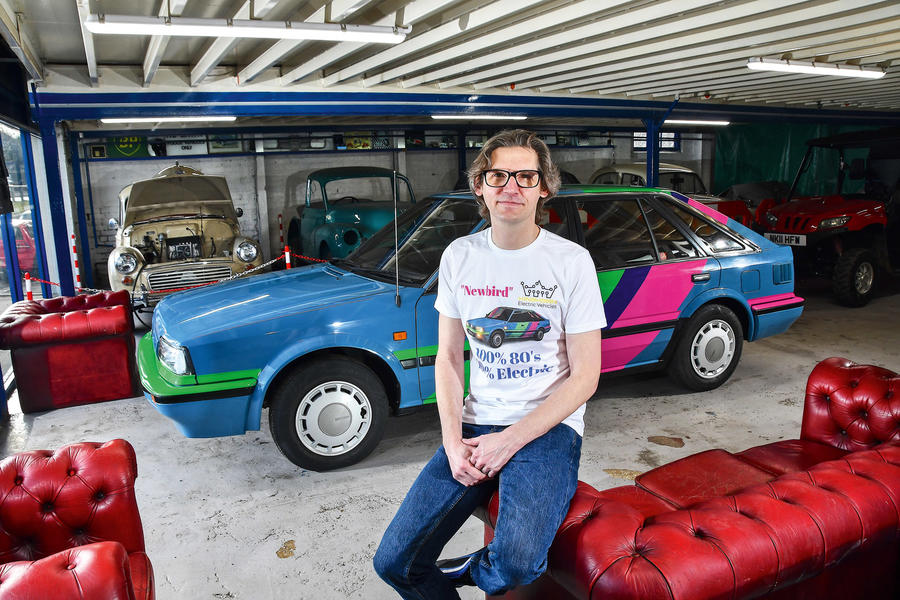 The conversion from 1989 Bluebird to Newbird is surprisingly effective. It was managed by George Kinghorn, founder of Kinghorn Electric Vehicles, which specialises in EV conversions of classic cars, in Durham. The project took eight hectic weeks.

Part of the Leaf-sourced battery pack sits under the bonnet, along with the motor and inverter, the rest in the boot. To counter the rear pack’s 200kg weight, adjustable springs have been fitted at the back, while Bilstein dampers are fitted all round.

The original Bluebird was a middle-of-the-road family car tasked with establishing Nissan as a credible UK manufacturer. However, settling into the Newbird’s soft, Rachelle-covered seats, turning the key, rotating the selector knob to Drive (Kinghorn plans to fit a Bluebird auto shifter) and heading silently from Durham to Sunderland reminds me that it was also comfortable and undemanding.

Kinghorn has calibrated the motor to avoid overwhelming the lazy 1980s brakes and the even lazier handling.

With Now That’s What I Call Music 15 in the cassette player, I’m really enjoying myself. In fact, electricity and a one-speed automatic gearbox suit the original Bluebird’s character. There’s notable understeer, of course, and it patters a bit on its sporty dampers, but go with theflow and the Newbird simply works.

Too quiet for you? Kinghorn is developing an optional exhaust sound with Milltek Sport. 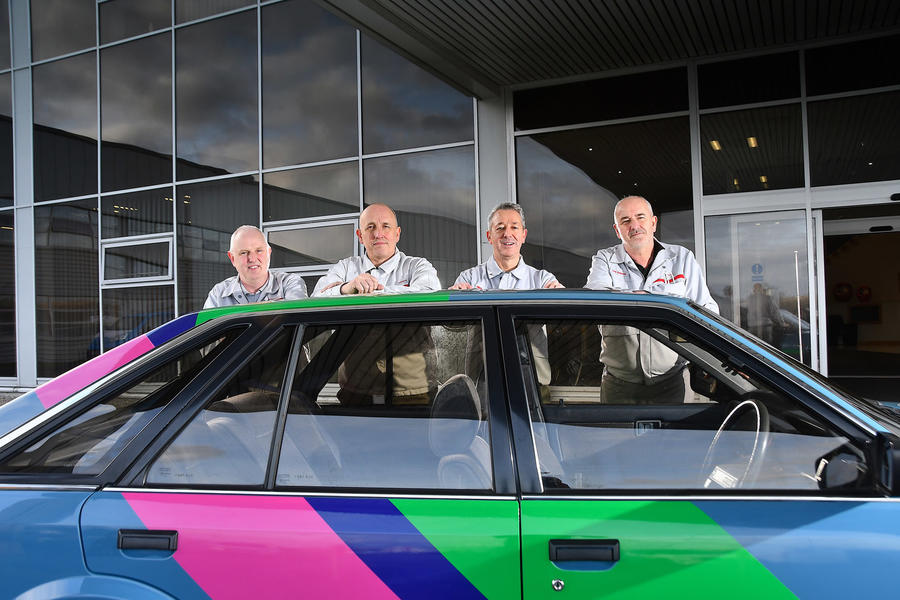 Remarkably, there are still 19 people working at the Nissan Sunderland plant who were either there when it opened or arrived shortly afterwards.

“We’re part of the factory’s DNA,” says Harker proudly. His first job was fitting the numberplate finishers to Bluebirds, while Adams was doing spot welding on the assembly line. Robinson cut his teeth in the trim and chassis shop; Greener did the rather crucial job of attaching the wheels.

“There’s real affection for the Bluebird, because it was the first car we built,” says Greener.

Adams reckons there was more camaraderie on the line than today: “People worked far more closely together. We would listen to the radio and belt out all the songs.”

All four chuckle over the Newbird’s ashtrays but marvel at its light and airy interior and its luxury features. “A lot of man-hours went into building a Bluebird,” says Greener. “It’s good to see they weren’t wasted.”

When Peter Robinson and his colleagues were building the first Bluebirds all those years ago, they couldn’t have had any idea that within their working lifetimes the internal combustion engines that ruled supreme would be on borrowed time as the world began to embrace alternative energy.

Nissan itself took a big step towards consigning the old ways to history when, in July last year, it announced its EV36Zero project – a £1 billion EV hub centred on its Sunderland plant. It claims this will create a world-first EV manufacturing ecosystem that brings EVs, renewable energy and battery production together on one site.

Meanwhile, the car maker has earmarked £423 million of that £1bn budget for the creation of a successor to the Nissan Leaf. Based on the recent Chill-Out concept, the crossover is due to go on sale in the next few years. It should keep the Sunderland production line workers busy.

They were lucky up there that they didn't get shut down because of Brexit! Nissan colud have done a Honda & close everything down & move it to their Barcelona factory. But in the end they decided to close the Spanish factory & keep Sunderland open, obviously the UK government offered more cash than the Spanish. After paying to keep Nissan, Boris or Richi didn't have enough cash left over to persaude Honda to stay or encourage Tesla to built its Euro Mega Factory in the UK (The Germans have very deep pockets & will do everything to keep their beloved Motor Industry afloat)

Marc 27 March 2022
And nothing to do with it being one of the efficient assembly facilities in the world.
Pietro Cavolonero 27 March 2022

1. Honda moved production to Turkey. Last time I looked they aren't in the EU

2. The UK doesn't need Tesla, we have our own battery plants in development

3. Sunderland is one of Nissan's most productive sites with a good customer base in the UK (unlike Honda)

I remember them from first time round, this is a nice homage to them, but, it has no real boot space and no space under the Bonnet either, so, it's People only.