BACK TO ALL NEWS
Currently reading: Suzuki Celerio and Baleno axed from UK sale
UP NEXT
Mystery Ferrari LaFerrari prototype spotted with new bodywork

Suzuki has confirmed it has discontinued its two cheapest models -  the Celerio city car and Baleno supermini - in the UK in a revamp of its product line-up.

The Skoda Citigo and Honda Jazz rivals are still visible on the company’s UK site, but a spokesman said that from the end of this month, no further new, unregistered cars will be available to buy from stock. A limited number of ex-demonstrator cars will be sold, though.

Suzuki says it is “refocusing its model range to cater for the high popularity of its best-selling UK models" – those being the Ignis, Swift, S-Cross and Vitara.

“This has resulted in sales of Celerio and Baleno being discontinued for the UK only. Suzuki is also preparing its range for future emission regulations in 2020, of which details will be confirmed and announced in the future.”

The Celerio did better, with 21,000 finding homes in 2018, but that was still outranked by most core rivals. Suzuki registered more than twice the number of Ignises in the same timeframe.

Suzuki Celerio brake failure: how it was fixed 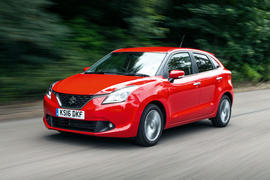 As I recall reading an article on here suggesting Suzuki were considering removing their “value” focused models so funding can be used elsewhere as there was no point in having a “rational” product for every “emotional” product.

The only problem with the Baleno was it was a little forgetful.  It was however a bit of a bargain once discounted with modern engines and lots of kit.

The interesting Suzis are the ones that sell. The Ignis is a gem of a town and country car in the same mould as the Panda. The Swift a great small hatch and the Vitara one of the best small suv’ s with proper off road ability. The rest....pah....

You forgot the Jimny!

not forgetting the fabulous Jimny!

I had a celerio as a courtesy

I had a celerio as a courtesy car a few times, it was actually a lot of fun, the engine was a peppy little thing. Shame the rest of the car was lousy.

Was at Suzuki Nottm yesterday hoping to see a Jimny

the saleman told me they were stopping selling those two models due to emissions as mentioned in your article.

he said that ditching these two models meant that they could import lots more Jimny as the emissions of the Jimmy were high/poor.

Baleno more expensive than some Ignis and Swift models? Dreadfully dull interior - didn't anyone at Suzuki spot this?

Be nice if they would import the Indian built Wagon R - rather like a less whacky Ignis - but I guess they won't. The Carry pickup might also sell given the relative lack of competitors.

What's the point of Captcha if all those spam advertising posts get through and why aren't they removed?

29 August 2019
How about replacing them with a lwb 5dr Jimny. That'll do nicely thank you.