A year after its shock unveiling at the CES technology exhibition, tech giant Sony's Vision-S concept car has hit public roads for the first time in prototype form.

A new video released by the electronics manufacturer shows a prototype wearing numberplates and a camouflage-style wrap being tested by engineers in Austria. It provides a glimpse of the advanced automotive technology Sony is developing.

The Vision-S was developed as a means for Sony to showcase its autonomous driving and in-car entertainment systems, and there remains no indication that the firm could put it into series production. At its unveiling, Sony boss Kenichiro Yoshida said it “embodies our contribution to the future of mobility.”

It features a raft of technology that showcases "the contribution Sony intends to make to realise a highly advanced autonomous driving society”.

Visible in the new footage is a fully functioning infotainment display that spans the width of the dashboard, with the central display showing a detailed digital rendering of the car's surroundings while it's in motion. Separate tabs giving access to a suite of cameras, a music player and various other interfaces can also be seen. 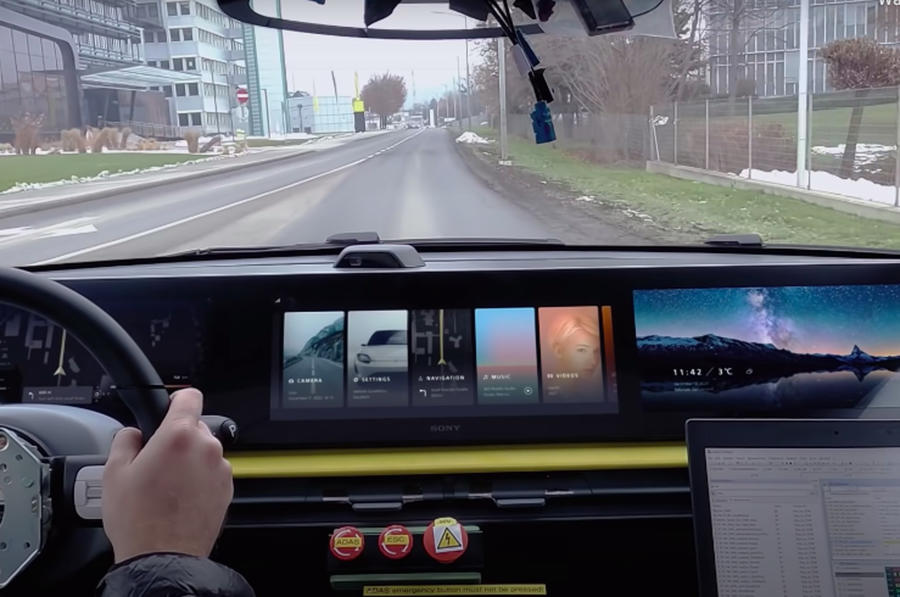 While it's unclear if Sony has any plans to make its own cars or simply intends to develop technology to sell to existing manufacturers, Yoshida said: “It’s not an exaggeration to say that Mobile has been the mega-trend of the last decade. I believe the next mega-trend will be mobility.”

Few technical details of the concept, which is understood to have been developed and built with the help of partners including Magna Steyr, Bosch, Nvidia and others, have been made public, but Sony says that it's powered by a pair of 268bhp electric motors. These give it a 0-62mph time of 4.8sec and a top speed of 149mph.

The key goal of the Vision-S is to showcase Sony’s automotive-relevant technology. It has 33 sensors of varying types embedded within it, which can identify people and objects both inside and outside the car as part of a ‘safety cocoon’.

Inside, the Vision-S features a number of time-of-flight (ToF) in-car sensors that can detect and recognise people within to optimise the infotainment and comfort systems.

The concept also features artificial intelligence, telecommunication and cloud technology, all accessed via a large panoramic touchscreen that dominates the dashboard and, Sony says, is operated via an “intuitive user interface”.

Sony isn't the first tech firm to show interest in the automotive world. Apple is in talks with Hyundai and others about building its long-awaited electric car, while Samsung has an automotive division that's working on advanced autonomous systems.

Hyundai in talks with Apple for electric car partnership​

If it's anything like their TVs it'll take 10 minutes to switch on and hang when you want to change radio channels... let's hope it's more like the PS4

Another concept that will

Another concept that will look nothing like the actual production model that will come out in.....2030. And it will be a "Tesla Killer"....

Very smart, though it appears to have less legroom in the back than a 911. For the record, Sony didn't invent the Lithium Cell.