From 20 paces the Skoda Vision X show car looks squat and hunkered down. Sitting on 20in wheels it’s sporty and full of purpose, which is exactly what its designer, Dalibor Pantucek, is most proud of. According to Pantucek, the production model will look very much like the Vision X when it breaks cover early next year.

The one-off concept car, first shown at the Geneva motor show this month, previews Skoda’s third SUV, a compact model that will sit beneath the Karoq and Kodiaq in the Czech marque’s SUV line-up. Still unnamed for now, the forthcoming model will be based upon the MQB platform used by the Volkswagen’s T-Roc and Seat’s Arona. 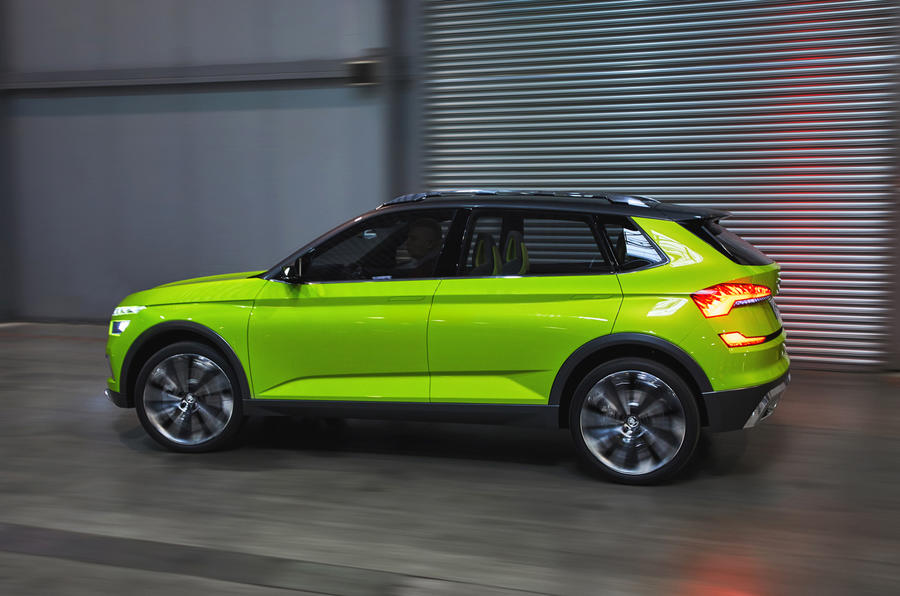 Whereas the majority of concept cars are made from clay, the Vision X is a working car with a real powertrain. Skoda invited us to drive the Vision X in Prague, albeit within the confines of an empty exhibition hall.

The heavily stylised bucket seats lend an air of athleticism to the cabin, but they’re thinly padded and curiously unsupportive. The pedals are awkwardly offset to the right, too, so much so that the accelerator pedal almost brushes up against the transmission tunnel. The steering wheel, meanwhile, doesn’t adjust for reach, so you have to lean forward just to grab a hold of it. 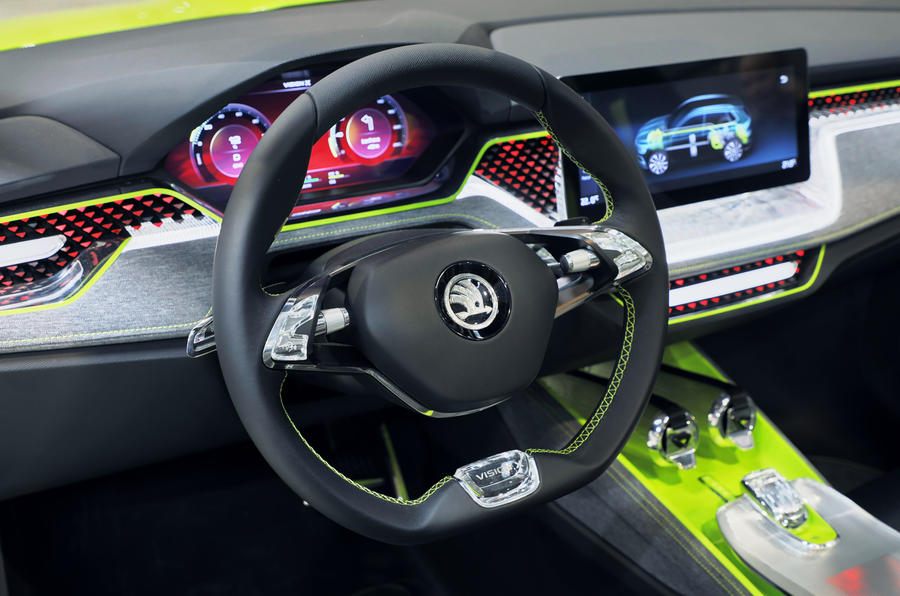 These are simply the realities of a show car. Even when they can be driven, show cars aren't engineered to drive with the comfort or refinement of a production car. The Vision X’s unusual seating position also reminds us why road-going models often look so much less dramatic than concept cars; their shapes have to be morphed and bloated to accommodate the driver and passengers.

The brake pedal is long and spongey - perhaps because the Vision X uses regenerative braking - but otherwise it drives just like a conventional car, despite its innovative hybrid drivetrain. It combines a 1.5-litre turbocharged combustion engine which can run on either petrol or compressed natural gas, the latter immediately lowering CO2 emissions by as much as 20%. The engine drives the front axle alongside a small starter-generator motor, with a 27bhp electric motor that works on the rear axle alone.

From behind the wheel you aren’t aware of the various power units working with, or indeed against, one other. The Vision X pulls away from standstill smartly and smoothly, the rear electric motor working seamlessly with the combustion engine to drive the car briskly off the line. With a two-kilometre (1.2-mile) electric-only driving range, but much less weight and complexity than a full hybrid, this ‘mild hybrid plus’ drivetrain configuration certainly has potential. 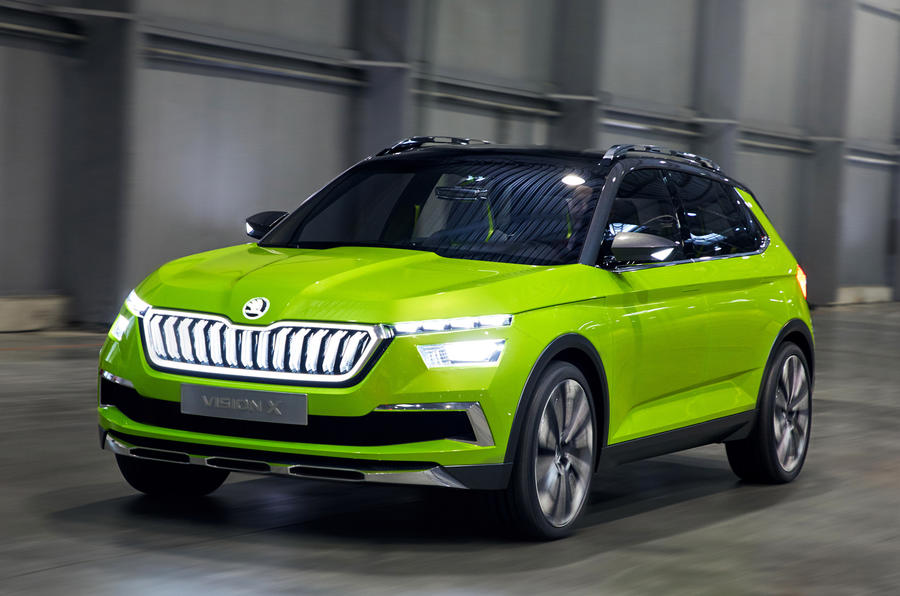 We anticipate it reaching production somewhere in Skoda’s model range in the next three or four years, although the company says it hasn’t yet decided if it will offer a hybrid version of the forthcoming entry-level SUV.

“The exterior design isn’t as crazy as other Skoda concepts, so we felt we needed to put more detail into the interior” says Dimitrios Darkoudis, the project’s interior design chief. The four individual bucket seats will be dropped from the production car, as will the high transmission tunnel and lit-up dashboard – along with the drone and pair of motorised skate boards that reside in the boot. 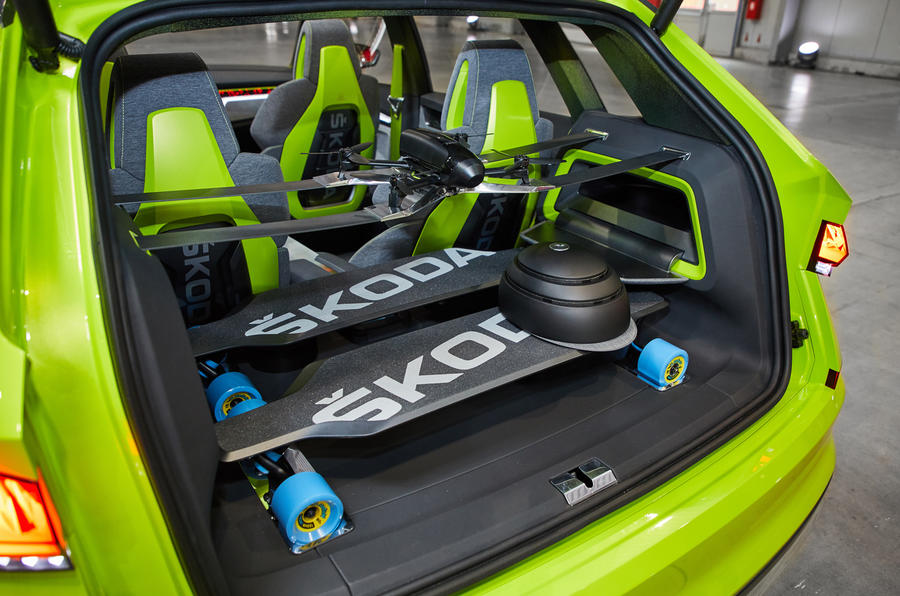 Certain elements are set to live on in the forthcoming road car, however, notably the ‘dashboard wing’ that reaches across the width of the cabin and wraps around the underside of the infotainment screen. And while Darkoudis used to favour integrated infotainment screens, he’s come around to tacked-on, tablet-style displays such as the 12.3in item fitted to the Vision X. "Buyers want very big screens these days," he says. "A large screen looks much better when it’s floating than when it’s integrated into the dashboard."

A floating infotainment screen will be very simple to push forward into production. The question is, can Skoda retain enough of the show car’s distinctive styling cues in the production model to make it as eye-catching as the Vision X? 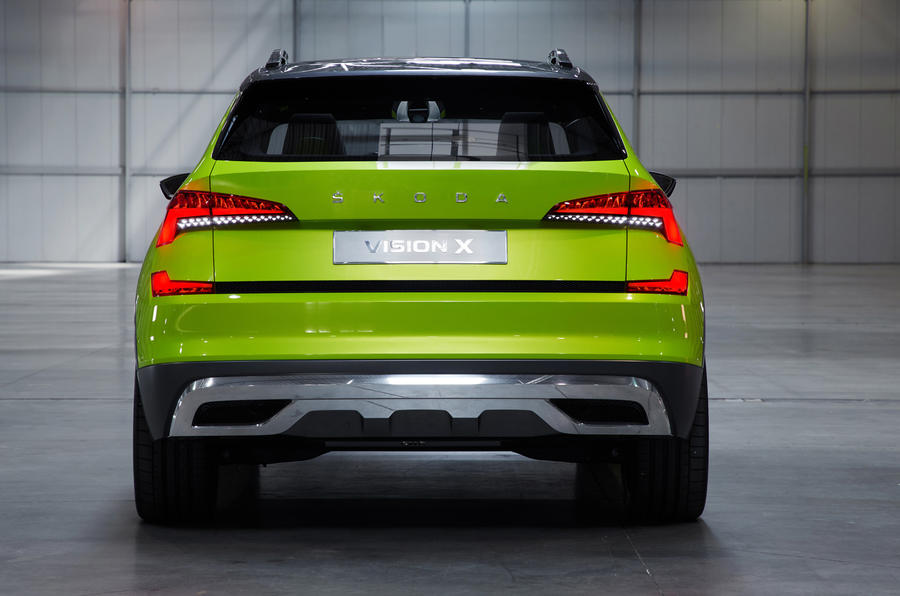